Submitted Successfully!
Thank you for your contribution! You can also upload a video entry related to this topic through the link below:
https://encyclopedia.pub/user/video_add?id=23323
Check Note
2000/2000
Peer Reviewed
Numerical Solution of Desiccation Cracks in Clayey Soils
This is a peer-reviewed entry published in Encyclopedia Journal, full entry can be found at 10.3390/encyclopedia2020068

This entry presents the theoretical fundamentals, the mathematical formulation, and the numerical solution for the problem of desiccation cracks in clayey soils. The formulation uses two stress state variables (total stress and suction) and results in a non-symmetric and nonlinear system of transient partial differential equations. A release node algorithm technique is proposed to simulate cracking, and the strategy to implement it in the hydromechanical framework is explained in detail. This general framework was validated with experimental results, and several numerical examples were published at international conferences and in journal papers.

Crack produced by desiccation in clayey soils is a problem that has implications in a wide range of ground-related fields. Geotechnical engineering, agriculture, mining, radioactive waste storage, tailings reservoirs, gravity dams, and public buildings are all affected by cracks due to desiccation [1][2][3][4][5].

The process of cracking due to desiccation in clayey soils is difficult to treat numerically because the features involved are not well understood and they are dependent on one another . The process of initiation and evolution of the cracks includes a desiccation process first (a hydraulic process) and a process of shrinkage after (a mechanical process). The hydraulic and the mechanical components of the problem are both nonlinear processes. Most of the soil’s properties that affect the cracking process depend on the suction (see definition of suction in Equation (3)) or moisture content values. The process is hydromechanical and coupled. Adding to the complexity is the not-yet-well-understood soil–atmosphere interaction . The mineral composition of the clay as well as the salts dissolved in the water could play a role in the process, but this influence is beyond the scope of this hydromechanical formulation.

There is a model [32] that presents a relatively simple application of linear elastic fracture mechanics (LEFM) to simulate tension cracks in soils. In that work, however, the soil is not drying, and the fracture toughness can be determined in a relatively easy way at the laboratory for the convenient water content of the specimen. Commercial codes, such as FLAC® [33], based on the finite difference method have been applied for simulating the curling of a high-plasticity clay subjected to desiccation with no restrictions and with no cracks [11]. Rodríguez et al. [2] developed a one-dimensional hydromechanical approach to study the initiation of a crack during a desiccation process applied to mine wastes. The model proposed by Trabelsi et al. [25] takes into account the heterogeneity of the soil and uses as the main variable the porosity to study the initiation and propagation of cracks in thin samples. The distinct element method proposed by Amarasiri et al. [27] (Amarasiri et al., 2011) is an adaptation of the commercial code UDEC® [34] for analysing desiccation cracks in soils. This approach uses an interface element to simulate the cracks but does not calculate the flow in the porous media (the variation of water content with time needs to be known). The discrete element method (DEM) has been used for the simulation of crack desiccation in thin cylindrical specimens [26] using the commercial code PFC3D® [35] in which the variation of the stiffness and the tensile strength was taken into account and drying shrinkage was imposed on each aggregate at the micro-scale. The mesh fragmentation technique [28] uses high-aspect-ratio elements between the standard elements of a mesh making the model easily adapted to standard finite element programs. The lattice spring model DLSM is a two-phase bond model [29]. Finally, there have been several attempts to use simple models of particles connected by springs or viscoelastic Maxwell elements [36].

The classical theories of continuum mechanics, unsaturated soil mechanics, and the strength of materials and concepts in fracture mechanics are the preferable framework when studying problems such as this. The mathematical problem that emerges from the classical theories in this approach is resolved by the finite element method using material parameters obtained from laboratory tests in a controlled environment. Then, the approach is theoretical, experimental, and numerical (Figure 1). 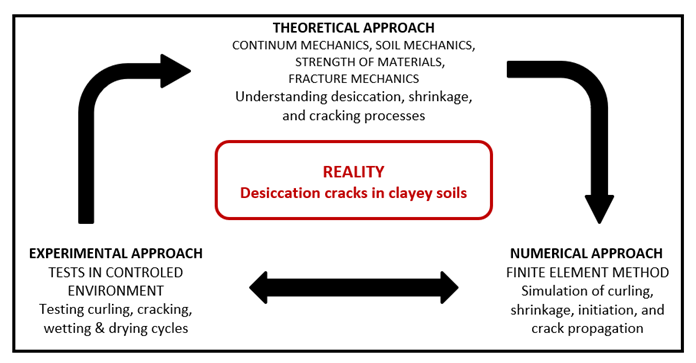 Figure 1. A theoretical, numerical, and experimental approach to the desiccation crack problem in clayey soils.

In this entry, the flow in deformable porous media is resolved by the finite element method with a  formulation [37]. A release-node technique is used to simulate the cracking process. The capabilities of the approach have been published recently [24][38]. In this approach, desiccation, shrinkage, and cracking are solved without imposing distribution or variation of water content. The system evolves from its initial conditions in suction and displacements first. After a while, the first crack appears when the tensile strength is reached at a point in the soil’s matrix. The release-node algorithm deals with the propagation of the cracks allowing changes in the suction at the boundaries at the new surfaces created by the cracks. Any other technique discussed above to tackle the cracking process can be implemented in the context of the general finite element hydromechanical model proposed here. The more complex the fracture mechanics approach is, the more parameters determined at the laboratory will be necessary and the more numerical instabilities will have to be resolved when simulating the process.

More
© Text is available under the terms and conditions of the Creative Commons Attribution (CC BY) license (http://creativecommons.org/licenses/by/4.0/)
Upload a video for this entry
Information
Subjects: Engineering, Geological
Contributor MDPI registered users' name will be linked to their SciProfiles pages. To register with us, please refer to https://encyclopedia.pub/register :
Hector U. Levatti
View Times: 272
Online Time: 25 May 2022
Table of Contents
1000/1000
Hot Most Recent