Submitted Successfully!
Thank you for your contribution! You can also upload a video entry related to this topic through the link below:
https://encyclopedia.pub/user/video_add?id=2298
Check Note
2000/2000
CD19-CAR-T Cells
Edit
Upload a video
This entry is adapted from 10.3390/cancers12092612

CD19-CAR-T (CD19-targeted chimeric antigen receptor T-) cells are the first cell therapy products for the treatment of relapsed or refractory B cell acute lymphoblastic leukemia (B-ALL) that were approved by US Food and Drug Administration (FDA) in 2017[1][2]. Since then, CD19-CAR-T has brought a gigantic revolution in the field of immunotherapy because of the high percentage rate of complete remission (CR) in several blood-related malignancies[3][4][5][6]. While some challenges increase the risk of treatment failures, such as an “on-target off-tumor” adverse event instigating B cell aplasia, i.e., CD19-CAR-T cells kill all healthy B cells because of CD19 expressed in all B cells[7][8][9][10]. B cell aplasia contributes to hypogammaglobulinemia, which is one of the main factors leading to infection in patients[10]. Although these patients were administrated an intravenous immunoglobulin to maintain IgG levels, concomitant bacterial, viral, and fungal infections were still observed [11][12].

At present, some strategies have been developed to overcome the “on-target off-tumor” effect. Since the ideal specific target is almost non-existent in reality, it is a good idea to target structurally differentiated proteins. For example, the engineered CAR-T cells targeting the integrin β7 activated conformation was specifically effective against multiple myeloma (MM) without damaging normal hematopoietic cells[13]. Similarly, recognition of the Tn-glyco form of MUC1 by engineering CAR-T cells exhibited target-specific cytotoxicity to cellular adenocarcinoma [14]. According to another strategy, splitting 4-1BB domain and CD3ζ domain and fusing them together with two different single chain fragment variable regions (scFv) respectively, T cells would be entirely active if only two antigens were recognized at the same time[15]. Likewise, the same result was found using the “And gate” approach, in which logical control of CAR-T cells responses needed two different antigen engagements[16][17][18]. Although these strategies can reduce the incidence of the “on-target off-tumor” effect, they are not universal and not easy to implement.

In contrast to the strategies outlined earlier, inhibitory CAR (iCAR) is a versatile and implementable solution to subdue the “on-target off-tumor” effect by providing a negative signal to regulate T cell activation. In 2013, Fedorov et al. developed a PD-1-based iCAR strategy and they provided a proof of concept that CAR-T cells expressing an iCAR could discriminate between off target cells and target cells and functioned in a temporary and reversible manner[19].

KIRs are the most important inhibitory receptors expressed predominantly in NK cells and a small subset of T cells [20]. They can dampen the activation of NK cells after interacting with the human leukocyte antigen (HLA) ligands expressed on the surface of normal cells[21][22]. Tumor cells downregulate HLA to escape from the T cells immune surveillance[23][24][25]. Data from the Human Protein Atlas Database demonstrate that HLA-C is low or non-expressed on most tumor cell lines, but highly or moderately expressed in normal tissues. PD-1 is an inhibitory protein expressed in activated T cells to limit the excessive activation of T cells[26][27][28]. In this study, we engineered a novel iCAR consisting of the extracellular domain of KIR2DL2, CD8a hinge and transmembrane, and the intracellular domain of PD-1. This KIR/PD-1-based iCAR was termed as iKP CAR. We speculated that when KIR2DL2 recognized HLA-C1 on normal cells, iKP CAR would deliver a negative signal to inhibit T cells response via the PD-1 domain, meanwhile, iKP CAR did not work in the absence of HLA-C1 on tumor cells, so that iKP CAR could discriminate between normal cells (HLA-C1+) and tumor cells (HLA-C1−). Simultaneously, we hoped that CD19-CAR-T cells with an iKP CAR could eliminate CD19+HLA-C1− malignant B cells, while reducing the damage to CD19+HLA-C1+ healthy B cells.

CARs use scFv structure to recognize target antigens on cancer cells. The safety of CAR-T cells depends on the specificity of target antigens. However, most antigens are also expressed in normal cells, hence the “on-target off-tumor” effect is inevitable. This behavior of CAR-T cells causes severe side effects in the body systems expressing the target antigens[29]. Current clinical solutions are to use high-dose corticosteroid for treatment when “on-target off-tumor” events occur[30]. This immunosuppressive drug controls off-target toxicity at the cost of abolishing the T cells antitumor effect.

Fedorov et al. provided a model to elucidate the possibility to apply iCAR to regulate the function of CAR-T cells [19]. As we know, NK cells can discriminate between normal cells and abnormal cells that do not express adequate amounts of HLA such as cancer cells, virus-infected cells, etc[31]. Whether they are activated depends on the integrated signal of positive and negative signals. KIR is one of the important inhibitory receptors and exerts an inhibitory function to constrain NK cell response upon recognizing HLA on normal cells[32]. Based on the activation mechanism of NK cells, we fused the PD-1 intracellular signal domain and the extracellular recognition domain of KIR2DL2 to develop an iKP/PD-1-based iCAR (iKP CAR), and the data demonstrated that T cells co-expressing CD19 CAR and iKP CAR could discern between malignant B cells and normal B cells in vitro and in vivo.

Two factors are important for iCAR design. Firstly, the target of iCAR should be widely expressed on normal tissue cells, but rarely expressed on cancer cells. Obviously, HLA is an ideal target for iCAR. As HLA-C1 subtype has a high expression frequency in humans[33], we choose the extracellular domain of KIR2DL2 (whose ligand is HLA-C1) as the recognition domain of iCAR. Secondly, the intracellular signal domain should respond quickly and strongly in a transiently reversible manner once the extracellular recognition domain binds to the target. PD-1 is a powerful inhibitory molecule in T cells that dephosphorylates the TCR signal in a few hours after interacting with PD-L1[34]. The dephosphorylation event is a dynamic and reversible process, which can ensure that T cell activity can restore during engagement of target cells. Therefore, we used the intracellular domain of PD-1 as the signaling domain of iCAR in the current study.

“On-target off-tumor” toxicity has seriously limited the clinical application of CAR-T cells in the treatment of solid tumors. It has been reported that HER2-targeted CAR-T cell treatment for colon cancer caused a patient death because of CAR-T cells off target to pulmonary tissues[37]. In theory, iKP CAR can also reduce the “on-target off-tumor” toxicity of HER2-CAR-T cells to normal tissue cells. So far, our lab has detected the efficiency of iKP CAR in HER2-CAR-T cells therapy in vitro and in vivo, and similar results have been acquired (data not published).

In conclusion, we demonstrated a novel iKP CAR can recognize HLA-C1 and deliver an inhibitory signaling to T cells. T cells can be activated by CD19 CAR and kill malignant B cells because iKP CAR does not work (Figure 1A). Once it recognizes “self-HLA-C1” on normal B cells, iKP CAR will deliver an inhibitory signaling via the intracellular PD-1 domain to halt T cell activation mediated by CD19 CAR (Figure 1B). This “missing self” activation mechanism like NK cells confers to iKP-19-CAR-T to control malignant B cells effectively and spare normal B cells in vitro and in vivo. The effectiveness of iKP CAR in the human body needs to be verified in future clinical trials. 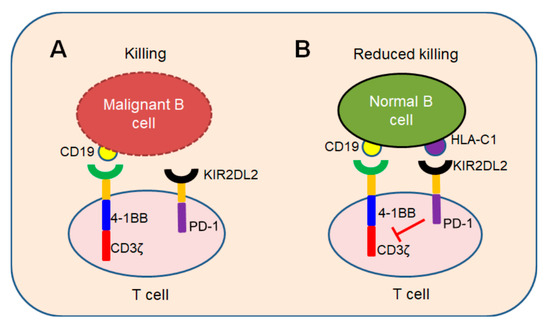 Figure 1. “Missing self” mechanism of iKP CAR. T cells co-expressing CD19 CAR and iKP CAR exploit “missing self” activation mechanism similar to NK cells. (A) T cells are activated by CD19 CAR and kill malignant B cells upon recognizing CD19 on malignant B cell tumors. (B) CD19 CAR activation signal is inhibited by PD-1 signal when iKP CAR is engaged to “self-HLA-C1” on normal B cells and iKP-19-CAR-T cells do not kill normal B cells.

More
© Text is available under the terms and conditions of the Creative Commons Attribution (CC BY) license; additional terms may apply. By using this site, you agree to the Terms and Conditions and Privacy Policy.
Upload a video for this entry
Information
Subjects: Immunology
Contributor MDPI registered users' name will be linked to their SciProfiles pages. To register with us, please refer to https://encyclopedia.pub/register :
Wenzheng Jiang
View Times: 467
Revisions: 3 times (View History)
Update Time: 26 Oct 2020
Table of Contents
1000/1000
Hot Most Recent