Submitted Successfully!
Thank you for your contribution! You can also upload a video entry related to this topic through the link below:
https://encyclopedia.pub/user/video_add?id=22978
Check Note
2000/2000
Chronic Wounds
Edit
This entry is adapted from 10.3390/pharmaceutics14051021

The chronicity of wounds is affected by several contributory factors, including hormonal imbalances, cytokines, invasive microbial infections, and growth factors. More importantly, bacterial infections have been implicated as the predominant feature in most chronic wound microenvironments, including Staphylococcus aureus and Pseudomonas aeruginosa. These bacteria exist in polymicrobial forms forming biofilms that afford them protection against the host’s immunity and conventional antibiotics. S. aureus biofilms are sometimes present close to the surface of chronic wounds, while P. aeruginosa biofilms appear deep within wound tissue. The recalcitrant disposition of these microbes has been implicated as one of the causalities of antimicrobial resistance.

The skin is known to afford a variety of important protective functions; however, whenever its integrity is compromised by injuries, the body initiates a dynamic process at the wound site, resulting in the recovery of the tissue and restoration of the skin’s barrier function [1]. Four sequential unique phases are known to be involved in healthy acute wound healing, including haemostasis, inflammation, proliferation, and remodelling, as shown in Figure 1 [2]. The haemostasis phase is often observed on injury occurrence, and it is composed of platelet aggregation, leading to the formation of blood clots [1][3]. 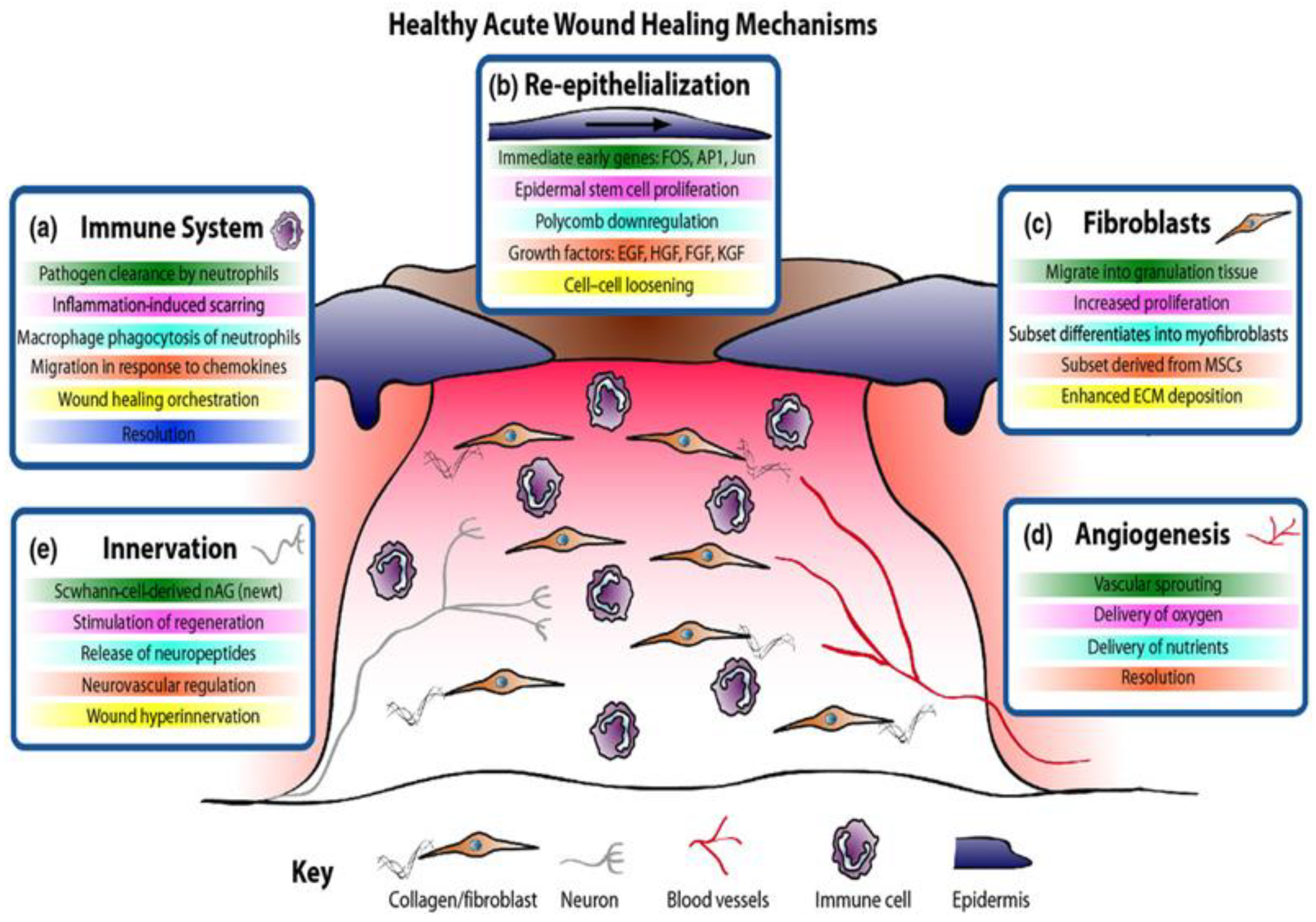 Figure 1. Healthy AWs adhere to well-modulated cellular and molecular events, resulting in the rapid clearance of invasive microbes and subsequent removal of apoptotic neutrophils, with regulated cell migration promoting early wound contraction and tissue remodelling [2].
This is regarded as the body’s response to protecting its structure by regulating bleeding and fostering the process of wound healing. However, this phase can be impaired if the patient is suffering from underlying medical conditions, such as diabetes and cancer. This is followed by the inflammation stage, which promotes the movement of blood cells (including phagocytic neutrophils and macrophages) to the wound site to afford protection to this site [3]. In this phase, extraneous particles (such as invasive microbes) are initially removed by the phagocytic neutrophils and the macrophages eliminate the dead neutrophils while fostering the rapid closure of the wound [1][2][4]. In the proliferative stage, the re-epithelialisation of wounds commences within hours of the injury’s occurrence [1]. This is followed by the formation of new blood vessels, including angiogenesis or neovascularisation, and the re-establishment of the perfusion to sustain the newly formed tissues [4]. Afterwards, the generation and deposition of fragments of the extracellular matrix (ECM), including collagen fibres and granulation tissues, is initiated [1][3]. The final phase involves tissue remodelling and scar tissue formation [1][3]. Moreover, when the healthy acute wounds fail to adhere to the standard healing time course, it often leads to chronic wounds (ulcerative skin defect) or hypertrophic scars (excessive scar tissue formation), as illustrated by Martin and Nunan [2] in Figure 2. Healthy acute wounds initiate appropriate modulation of the cellular and molecular sequence required to promote wound healing within a standard time course. On the other hand, the modulation of cellular and molecular events in chronic wound is often disrupted by a number of factors, including invasive microbial infection leading to high infiltration of inflammatory cells, including neutrophils, and these cells could be phenotypically non-identical to their corresponding analogues in normal acute wound healing. This is further complicated by persistent inflammation, unlike AW healing, which initiates well-modulated inflammatory response resolution. Moreover, the proliferation of keratinocyte gene expression in chronic wounds is partially activated with deteriorating fibroblasts having a reduced migratory magnitude [2]. 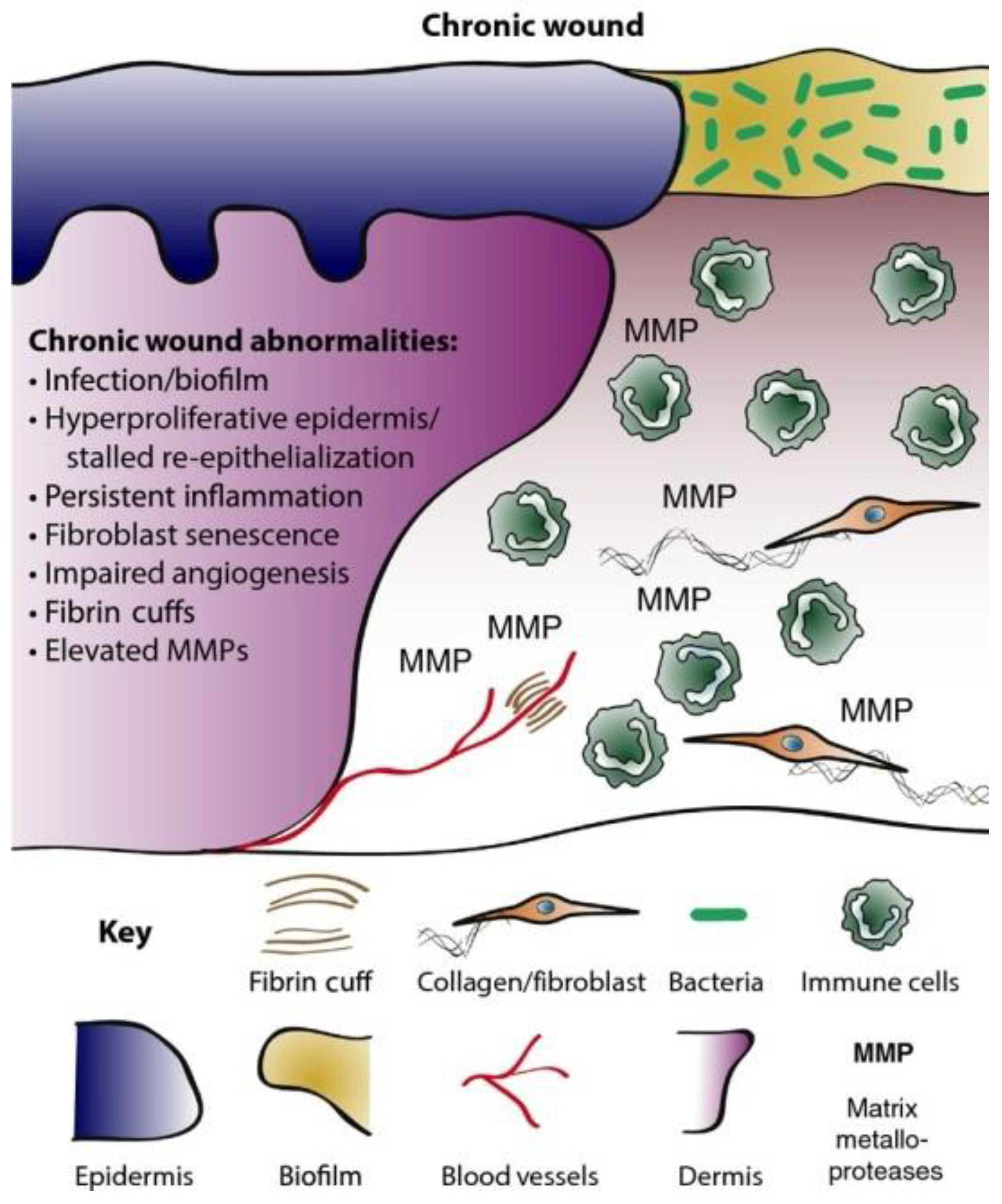 Figure 2. CWs are usually influenced by microbial infections resulting in persistent inflammation due to the recruitment of highly inflammatory infiltrates and inhibition of tissue regeneration [2].
Efficacious wound care agents are expected to protect wound tissues from bacterial infection, modulate inflammation, and scavenge free radicals (antioxidant), as well as foster cell migration and growth to aid in the recovery of damaged tissues [5].

A wound is considered to be chronic when it fails to undergo the normal phase for the recovery and restoration of the structural and functional integrity within 3 months (Figure 2) [2]. A CW’s microenvironment is characterised by the presence of dead tissue, and high influx of metalloproteases and pH [2][6][7]. The pH of CWs is known to be alkaline, as opposed to those of the normal skin and AW environment, which are slightly acidic [8]. This pH change is often attributed to the presence of high bacteria loads, as an alkaline pH is capable of breeding or encouraging the proliferation of bacteria in wounds [8][9]. A slightly acidic pH has been shown to foster wound recovery, and this could be one of the contributing factors in rapid AW recovery, as they are devoid of high bacteria loads [8][9]. Reports by Gray et al., James et al., and Schierle et al. suggested that the CW environment is capable of fostering the development of high bacteria loads and biofilms, which are sometimes recalcitrant to antibiotics [9][10][11]. This causality has been attributed to the delay in the re–epithelisation of compromised or defective skin [10]. A number of studies have demonstrated that almost 60% of CWs possess biofilms, representing an almost 10-fold higher association in comparison to AWs [12][13]. Moreover, numerous reports have shown that the CW microbial environment exists as polymicrobial with the presence of multiple pathogenic Gram-positive and Gram-negative bacteria (Pseudomonas aeruginosa, Escherichia coli, and Staphylococcus aureus), and these are potential biofilm formers that often account for antimicrobial resistance (AMR) [9][14][15][16][17][18][19]. These biofilms tend to change the properties of bacteria through their extracellular polysaccharide matrix (EPS), which affords them a protective shield against host immunity and chemotherapeutic intervention, including antibiotics. This is often achieved not only by inactivating antibiotics, but also by the regulation of the pH and metabolic state of the polymicrobial environment, contributing to the virulence of the bacteria [15][16][17][18][19][20].
Microbial colonisation and growth resulting in wound infections have been reported to be a contributory factor to delayed wound healing, which can sometimes lead to devastating effects, including low work productivity, lengthy hospitalisation, amputation, and death [20][21]. This influences the proper functioning of keratinocytes and fibroblasts (skin cells) by impairing the inflammation phase of wounds, and this is one of the leading causatives that influence the chronic wound environment [1][9][10][22]. Moreover, factors such as an inefficient blood supply at the wound site and inappropriate treatment modalities have been reported to cause non–healing wounds [7][23][24]. Some of these infections do not only occur in community setting, but studies have also shown that there has been an alarming increase in the number of bacterial infections occurring in healthcare facilities. These bacteria mostly infect their hosts through the skin and respiratory tract in contaminated hospital environments or through contaminated food. Moreover, infections can occur through the use of contaminated medical devices, including catheters and joint prostheses [16].

Globally, WHO data suggest that AMR accounts for significant morbidity and circa 700,000 mortalities annually [25]. With the rapid rise of AMR contributing to the increased burden of wound care to the health care community [26][27], it is imperative to explore antibiotics-free compounds or their combination with antibiotics in the management or elimination of chronic wounds. Wounds infected by bacteria, including those capable of forming biofilms, are known to be recalcitrant to host defence and antibiotics, leading to AMR. The CW microenvironment is a suitable breeding site for bacterial colonisation and proliferation due to its relatively alkaline nature. This has given rise to AMR bacteria as a result of their biofilms that encapsulate the bacteria, affording them more defence against antibiotics. AMR prevalence is often associated with suboptimal administration of antibiotics, target modification, efflux mechanism, misuse, and the over-prescription of antibiotic agents [25][26][27].
Recent studies have shown that antibiotics-free compounds could be a dependable and reliable strategy in the management of wounds, and this could be due to their mode of action, which is unaffected by AMR, unlike antibiotics, which have been shown to sometimes suffer from AMR, including methicillin-resistant Staphylococcus aureus (MRSA) [26][27][28][29][30]. Interestingly, these antibiotics-free compounds can elicit ideal pharmacological responses when independently administered with minimal or no adverse reaction. Specifically, they are active in the disruption of bacterial biofilms by attacking the EPS, known to afford support to the structural integrity of these biofilms. In addition, they can be employed as pharmaceutical or cosmetical adjuvants with other compounds, including (natural or semi-) synthetic antibiotics [31]. The functionalities of antibiotics-free compounds in wound healing are illustrated in Figure 3. 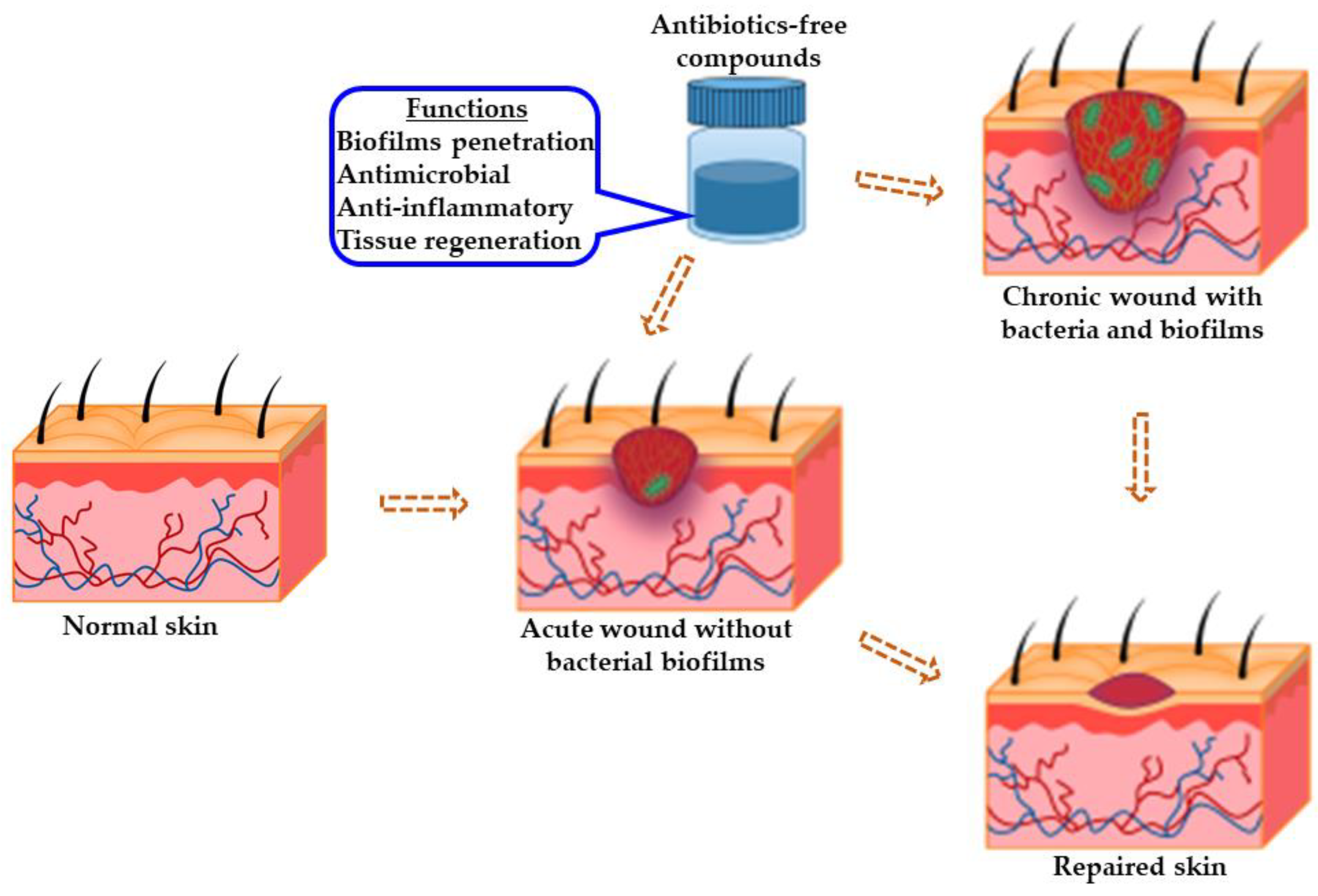 Figure 3. Schematic diagram showing the functionalities of antibiotics-free compounds towards wound healing. The morphology of healthy skin is distinct from that of chronic wounds due to defects in CWs’ skin anatomy and high invasive bacteria loads. Antibiotics-free compounds can serve as prophylactic or chronic wound care agents when alone or in formulation with antibiotics.
The classification of antibiotics is based on their mode of action such as the inhibition of bacterial cell wall synthesis, protein production, DNA replication, and folic acid metabolism [32][33]. Antibiotics including penicillin, cephalosporins, carbapenems, and vancomycin function by disrupting bacteria cell wall production [32][33]. Protein biosynthesis inhibitors attack the 30 s or 50 s (spike) subunits of bacterial ribosomes, thereby preventing the production of bacterial proteins. Drug molecules in this class include chlortetracycline, tetracycline, doxycycline, chloramphenicol, and linezolid [32][33]. Quinolones (fluoroquinolones) [32][33] work by inhibiting bacterial DNA replication. The folic acid (FA) metabolism inhibitors, including sulphonamides and trimethoprim, work in synergy with the inhibition of the bacteria production pathway, with each drug disrupting each stage of FA metabolism [32][33].
In addition, the antimicrobial mechanism of action of antibiotics-free compounds is non-specific, except for the postulations that the phenolic compounds in plant materials are responsible for their antimicrobial activity [34]. Phenolics are the most prominent constituents of plant materials implicated in antibacterial activity. These phenolics include ketones, aliphatic alcohols, terpenes, isoflavonoids, aldehydes, and acids [34]. These compounds act by interacting with the bacterial cell structure, thereby disrupting the membrane functionality, leading to the deformation of the bacterial cell structure [31]. Moreover, the activities of these compounds are dependent on the administered concentrations, with minimal concentrations impairing the bacterium enzymatic functions, while a high dose is known to destroy bacterial proteins and also inhibit the bacterial metabolic pathway. Furthermore, some of these phenols work in synergy, which can influence their antibacterial activity in the disruption of bacterial peptidoglycans and the outermost membrane composed of lipopolysaccharides and proteins [31][34]. For instance, the antimicrobial mechanism of action of cinnamaldehyde (cinnamon) has been proposed to exhibit bacteriostatic or bactericidal actions by altering the bacterial cell membrane, preventing cell division, membrane porins, motility, and the formation of the biofilm [20][31].
Antibiotics-free compounds not only have the potential to reduce the invasive bacterial load and persistent inflammation of chronic wounds, but also modulate growth factor expression, which is necessary for tissue regeneration at the wound’s site, Figure 3.