Submitted Successfully!
Thank you for your contribution! You can also upload a video entry related to this topic through the link below:
https://encyclopedia.pub/user/video_add?id=22968
Check Note
2000/2000
Polymers in High-Efficiency Solar Cells
Edit
This entry is adapted from 10.3390/polym14101946

Third-generation solar cells, including dye-sensitized solar cells, bulk-heterojunction solar cells, and perovskite solar cells, are being intensively researched to obtain high efficiencies in converting solar energy into electricity. However, it is also important to note their stability over time and the devices’ thermal or operating temperature range. Today’s widely used polymeric materials are also used at various stages of the preparation of the complete device—it is worth mentioning that in dye-sensitized solar cells, suitable polymers can be used as flexible substrates counter-electrodes, gel electrolytes, and even dyes. In the case of bulk-heterojunction solar cells, they are used primarily as donor materials; however, there are reports in the literature of their use as acceptors. In perovskite devices, they are used as additives to improve the morphology of the perovskite, mainly as hole transport materials and also as additives to electron transport layers. Polymers, thanks to their numerous advantages, such as the possibility of practically any modification of their chemical structure and thus their physical and chemical properties, are increasingly used in devices that convert solar radiation into electrical energy.

Given the ever-increasing demand for electricity and environmental pollution, new, efficient, and, very importantly, environmentally friendly sources of renewable energy are being sought. However, it is worth remembering that a very large amount of electricity is still obtained from fossil fuels; thus, to find alternatives to non-renewable fuels, very efficient and relatively cheap sources of green energy are needed. One of the fastest-growing branches of renewable energy sources is solar energy, specifically photovoltaics. It is worth remembering that solar energy can be used in two ways, not only by photovoltaic cells but also by solar collectors for, among other things, heating [1]. Solar cells are divided into three generations. The first generation is made up of crystalline silicon cells, which are currently the most commercially used [2]. Thin-film devices based on the CdTe, CIGS (Copper Indium Gallium Selenide), GaAs, and a-Si, among others, represent the second generation [3]. Currently, the third generation of solar cells, which includes dye-sensitized solar cells (DSSC), perovskite solar cells (PSC), and bulk-heterojunction solar cells (BHJ), among others, is the most widely researched and rapidly developed [4][5][6]. Of course, as it is well known, currently, the highest solar-to-electricity conversion efficiencies are demonstrated by multi-junction solar cells overcoming the 47% threshold. However, these devices are very expensive to prepare, and their processes are extremely difficult and complicated, which significantly limits the possibility of their commercial application [7]. The use of organic compounds in photovoltaic devices offers great opportunities through a wide range of possibilities to modify the chemical structure of these compounds and, consequently, change their physical and chemical properties. In addition, it is also worth mentioning their significantly lower production costs, less energy consumption, and simpler preparation methods [8][9][10][11]. Research in recent years has confirmed a significant increase in the energy conversion efficiency of third-generation cells. According to the literature reports, perovskite solar cells achieve efficiencies of over 25% [12], DSSCs over 14% [13][14] and BHJs around 18% [15]. Furthermore, a great advantage of organic compounds is that they can be applied to various substrates using various methods. Numerous attempts have been made with often positive results to prepare flexible photovoltaic cells with polymer substrates. Both BHJ [16][17][18], PSC [19][20][21] and DSSC [22][23][24] structured devices are widely used for the preparation of flexible solar cells when new methods of preparing and applying materials to polymer substrates are sought.
In recent years, huge interest in using new polymeric materials in organic photovoltaics (OPV) has emerged. In each of these three types of the third generation of solar cells, polymeric materials find a variety of very important applications. Considering each of the components of solar cells, one can multiply the associated application of polymer materials.

DSSCs, increasingly studied worldwide, show an ever-increasing radiation conversion efficiency. A distinction is made between solar cells containing a liquid or gel electrolyte of a similar design and a solid electrolyte. Research on DSSCs began with the use of a liquid electrolyte, and it is this type of cell that is most commonly reported in the literature. This is mainly due to the fact that the preparation of a device with this structure is the least complicated and time-consuming and is ideal when testing new dyes. Additionally, the use of liquid electrolyte, although it improves the photovoltaic parameters of the device, has many disadvantages, among which the researchers can specify the limitation of the temperature range of the device, problems with proper sealing of the solar cell and causing corrosion of materials. Hence, the idea of replacing the liquid electrolyte with a solid or gel electrolyte emerged. When using these two types of electrolytes, it is difficult to achieve the same high parameters as with a liquid electrolyte. Still, numerous reports in the literature emerge to suggest this is being achieved. Replacing the liquid electrolyte, especially with a gel electrolyte, significantly increases the stability of the device over time and the charge mobility is definitely higher than with solid electrolytes. As also mentioned in the introduction, polymers are increasingly used in solar cells with DSSC structures. The following subsections describe the roles they play in them, including polymeric dyes, which are very difficult to find in other review papers. The structures of these devices are shown in Figure 1a, while the chemical structures of polymers used in this type of solar cell are presented in Figure 1b. 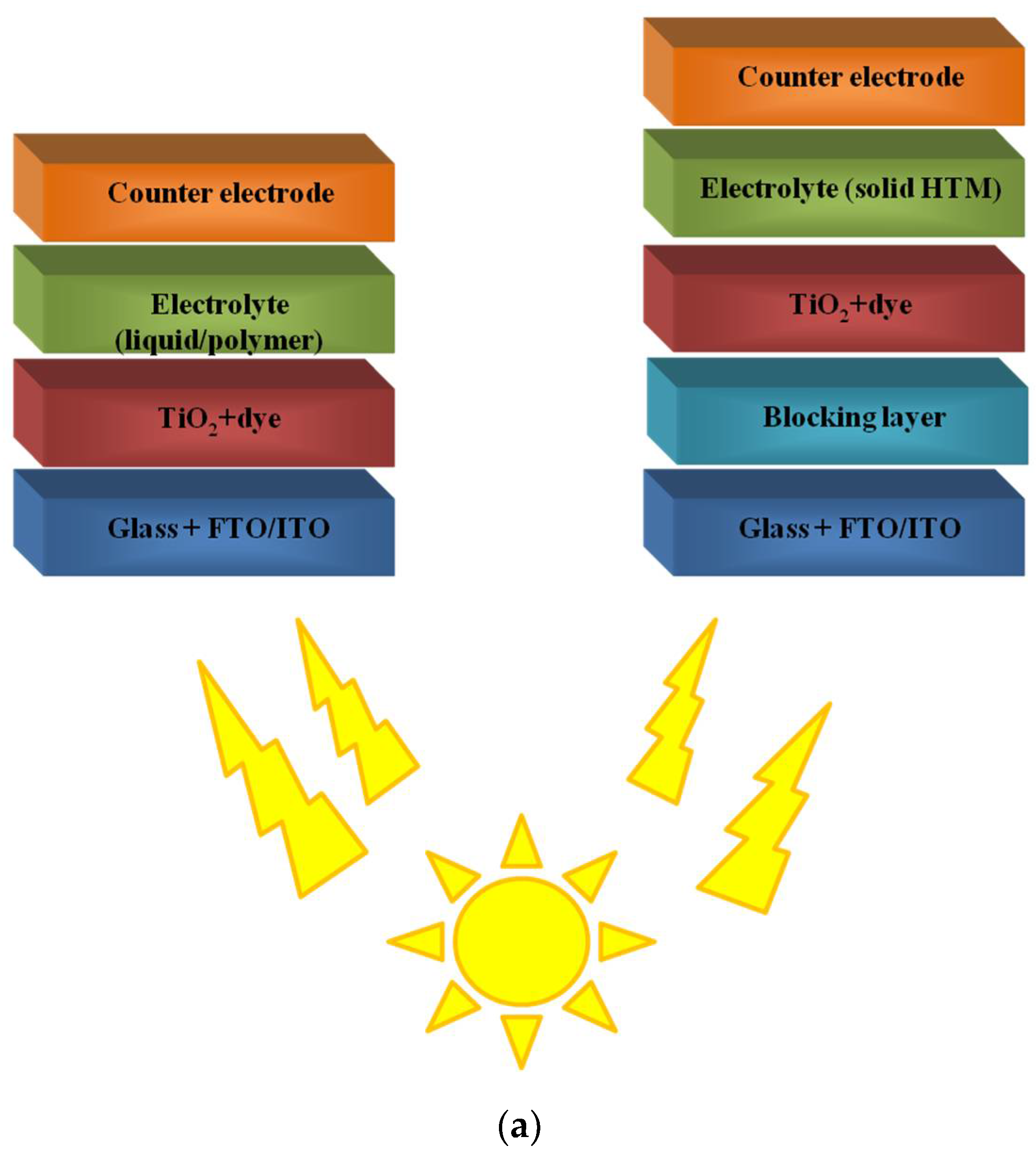 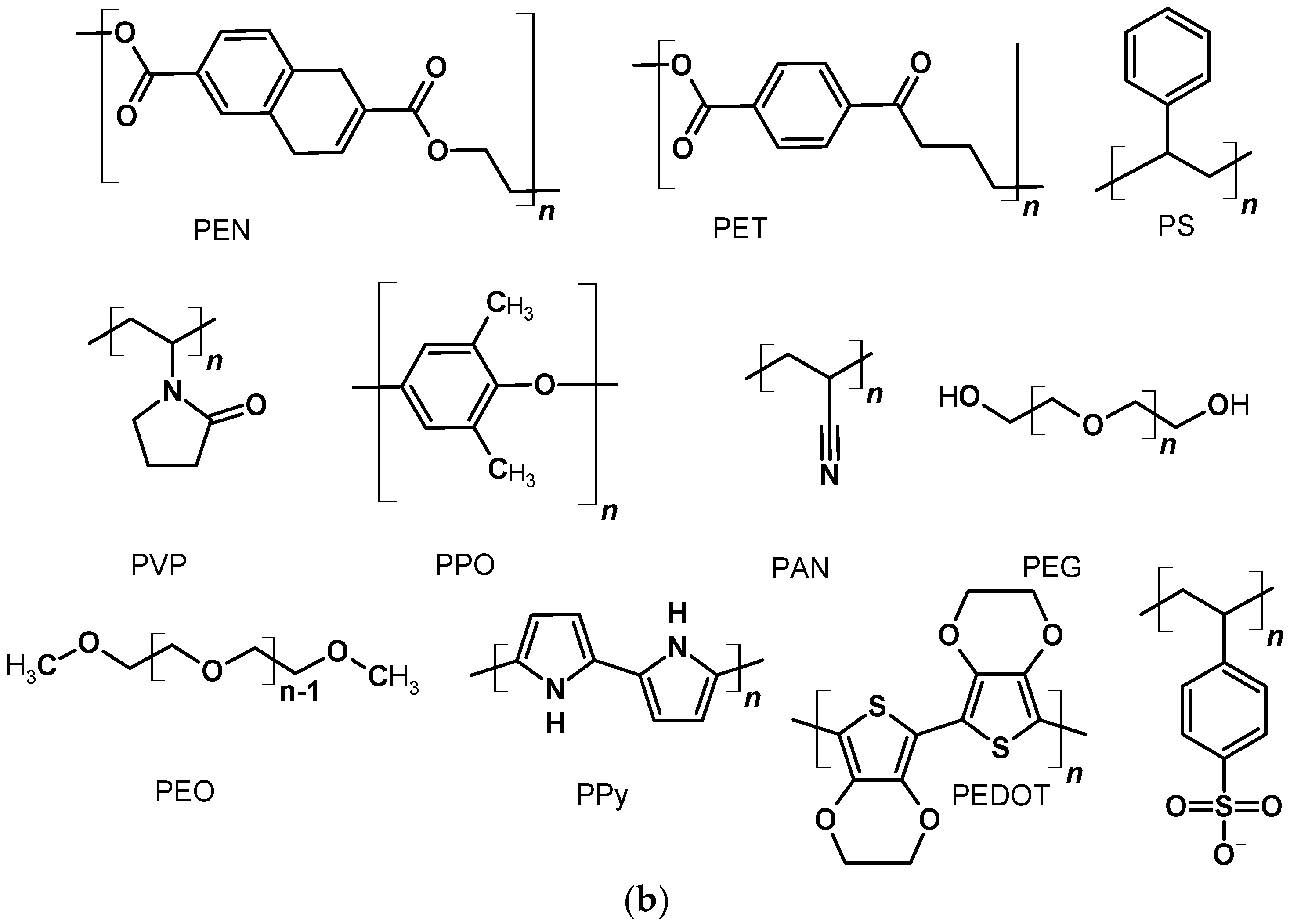 Figure 1. The structures of DSSCs with liquid and solid electrolyte (a) and polymer structures often used in this type of solar cell (b).

BHJ solar cells are characterised by their layered structure, but it is important to note that the active layer is a donor and acceptor blend. The simplest architecture of both conventional and inverted systems is shown in Figure 2. 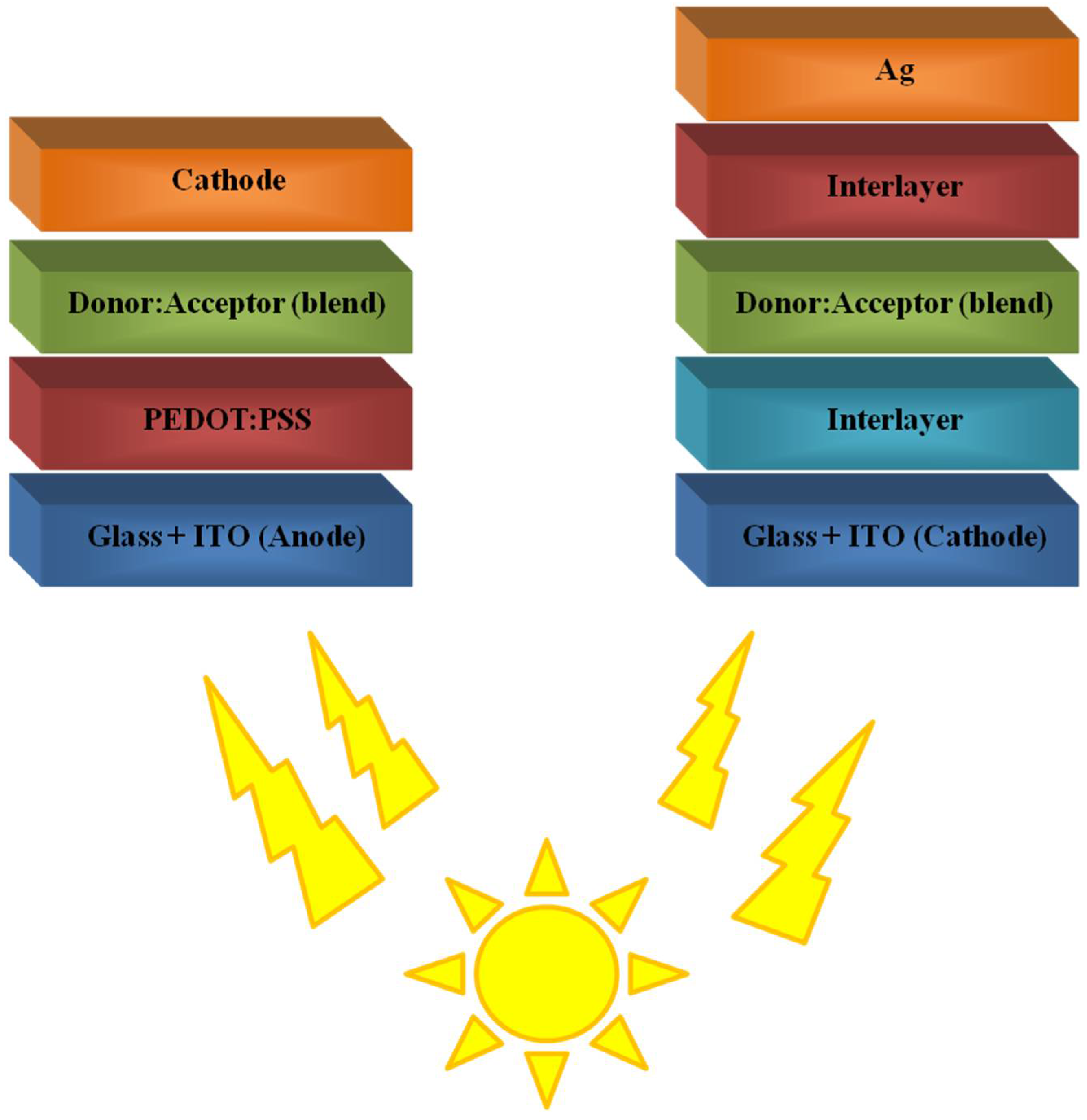 Figure 2. Schematic structure of a BHJ OSC with the conventional and inverted systems.

Over the last two decades from 2000, the significant development of the sourcing electricity concept from solar energy is observed. The current research topic in photovoltaics is perovskite solar cells. The PSCs are cells of the latest technology, for which has been noted a very fast increase in efficiency (PCE) from 3.8% in 2009 to 25.2% in 2020, which may indicate that this type of cell will find commercial applications [12][25][26]. The perovskite solar cells are a hybrid system, a combination of organic and inorganic structures. A perovskite can be represented by a general formula ABX3, where A is the organic ion (the most common is methylammonium ion −[CH3NH3]+), B is Pb2+ ion, Sn2+ or Cd2+, and X is a halogen ion I−, Br− or Cl−. The perovskite is characterized by wide absorption of visible and near-infrared radiation, low binding energy exciton (~2 meV), and a direct bandgap. Additionally, perovskite materials show: (i) a long time carrier life (~270 ns), which generates the length of the diffusion path at the level of ~1 μm in thin layers and up to ~175 μm in single crystals, thus ensuring hassle-free transport of charge carriers through the absorber (perovskite) 300 nm thick (no recombination effect), (ii) high mobility load carrier (up to ~2320 cm2 V−1 s−1); and (iii) high dielectric constant (~18–70), which makes them ideal materials for photovoltaics [27]. A perovskite absorber, hole-transporting material (HTM), electron transporting material (ETM), and electrodes are all common components in PSC devices. Photo-generated electrons/holes in the perovskite absorber are transported to the ETM/HTM and selectively collected by the anode/cathode when a PSC is illuminated. Both n–i–p (traditional) and p–i–n (inverted) forms of PSCs can operate successfully due to perovskites’ ambipolar charge transport feature [28].
This research is a presentation of the current achievements concerning the applications of polymers in perovskite solar cells. The conventional and inverted structures of PSCs are presented in Figure 3a, while the chemical structures of polymers used in PSCs are shown in Figure 3b. 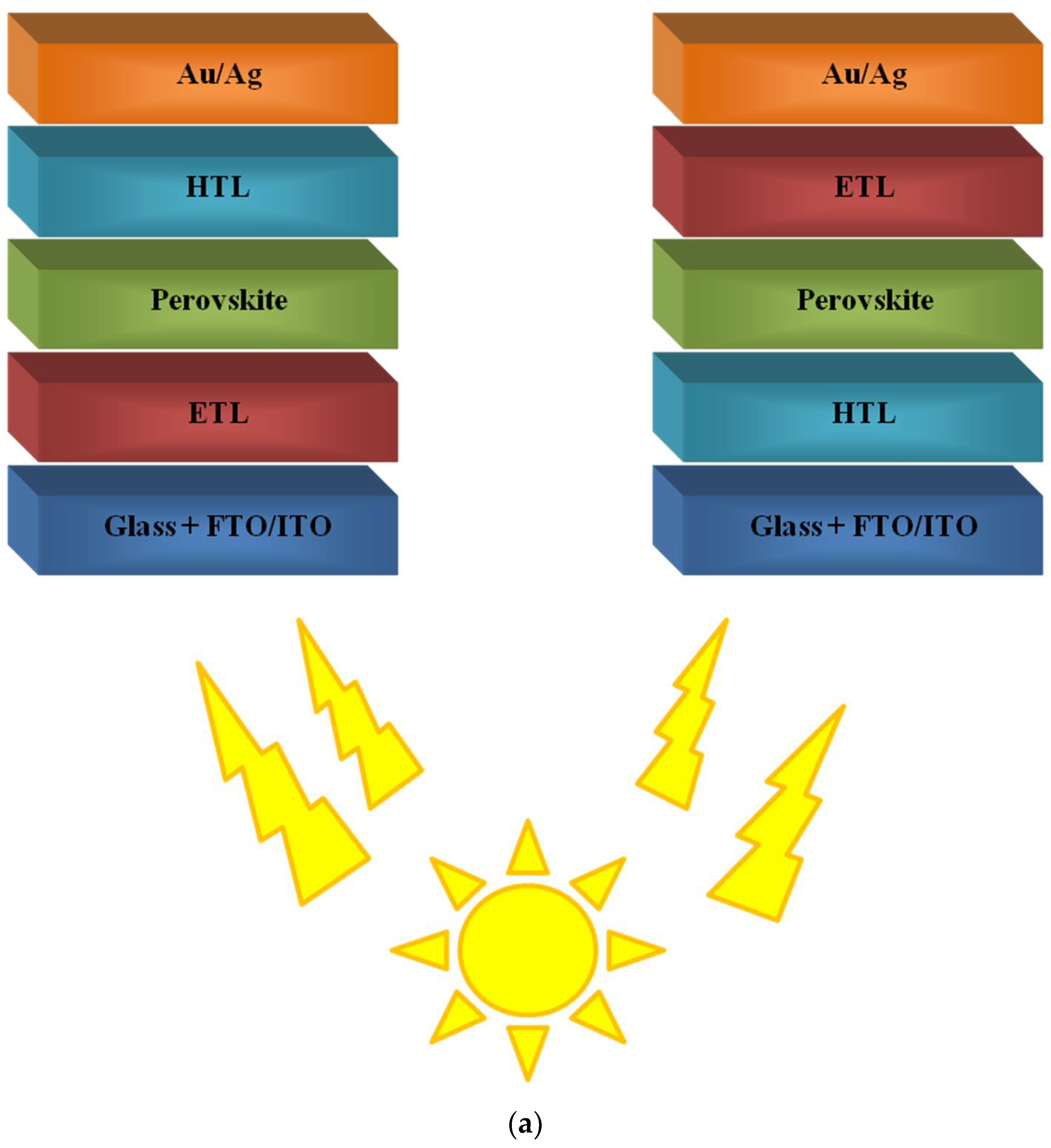 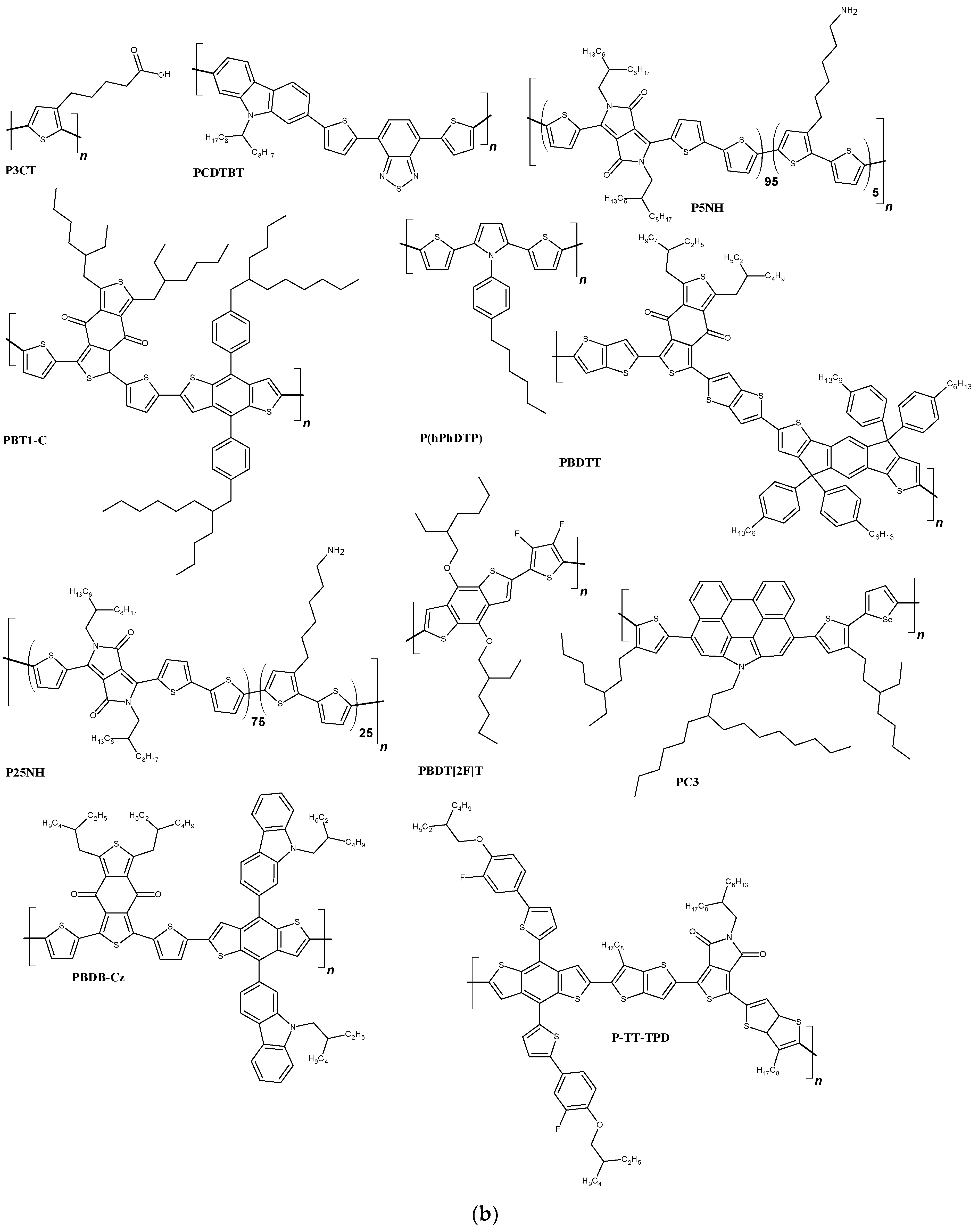 Figure 3. The conventional and inverted architecture of perovskite solar cells (a) and the chemical structures of polymers used in PSCs (b).

More
© Text is available under the terms and conditions of the Creative Commons Attribution (CC BY) license (http://creativecommons.org/licenses/by/4.0/)
Upload a video for this entry
Information
Subjects: Polymer Science
Contributors MDPI registered users' name will be linked to their SciProfiles pages. To register with us, please refer to https://encyclopedia.pub/register :
Bożena Jarząbek
,
Paweł Gnida
,
Agnieszka Katarzyna Pająk
View Times: 64
Revisions: 3 times (View History)
Update Time: 17 May 2022
Table of Contents
1000/1000
Hot Most Recent