Submitted Successfully!
Thank you for your contribution! You can also upload a video entry related to this topic through the link below:
https://encyclopedia.pub/user/video_add?id=2258
Check Note
2000/2000
Secondary Marine Metabolites
Edit
Upload a video
This entry is adapted from 10.3390/md18090476

Secondary marine metabolites are defined as molecules with a molecular weight ranging between 100 to 1000 Da and, unlike primary marine metabolites, are often found to be unique to an organism or a specific taxonomic group of the marine source. Other than marine macroorganisms such as algae, sponges, or corals, specifically marine fungi and bacteria have shown to produce novel secondary metabolites with unique as well as diverse chemical structures that may hold the key for developing novel drugs or drug leads. Secondary marine metabolites have been found in both prokaryotic and eukaryotic microorganisms, with unicellular bacteria (e.g., Bacillus sp., Pseudomonas sp.), eukaryotic fungi (e.g., Penicillium sp., Aspergillus sp.), filamentous actinomyces (e.g., Streptomyces sp.), and terrestrial plants being the most frequently studied and versatile producers. A potential clarification why organisms produce a high assortment of bioactive secondary marine metabolites is that these molecules furnish producers with a specific advantage against competing organisms and, furthermore, act as an adaptation to ecological conditions.

The ocean holds a broad reservoir of marine species full of natural pharmaceutical components of potential significance. Marine bioprospecting is a recent phenomenon; thus, aquatic life is a largely unexplored field of research [1][2][3][4]. Terrestrial life is the source of most pharmaceutically effective natural products [5]. For centuries, marine flora has been exploited for their potential medicinal applications throughout the world [6]. Among the marine organisms, bacteria, fungi, actinobacteria, seaweeds, and sponges have been utilized for cancer treatment  [7][8][9][10][11]. The most effective anti-cancer drugs are natural products. However, the natural product research and innovation phases are expensive, tedious, and time-consuming [12][13].

Few marine pharmaceutical products for marketing have been licensed and some molecules are being clinically trialed within Phases I and III, along with preclinical studies. It is notable that among the scientifically developed marine compounds, four compounds are used in cancer treatment, such as cytarabine (Cytosar), trabectedin (Yondelis), eribulin mesylate (Halaven) and the conjugated antibody brentuximab vedotin (Acentris).

The dynamic and extremely sensitive global marine ecosystem covers about 70.8% of Earth [14]. This extreme biodiversity encompasses a heterogeneous array of micro- and macro-organisms. Among them, microorganisms like marine bacteria, fungi, and micro-algae orchestrate a pivotal role in restoring the balance within the aquatic environment by being both a producer and decomposer [15]. Marine microalgae are essential ecologically which are used as food and medicinal products from ancient times. Marine microalgae are eukaryotic plants that contribute to drug discovery by their metabolicplasticity, which can trigger the production of several compounds with possible applications in combating various diseases, such as cancer [16]. Presently, these aquatic species have gained increasing acclaim for their bioactive metabolites, which provides an unparalleled potential for a range of pharmaceutical activity. The distribution of marine species differs depending on the type of open sea ecosystem, such as pelagic environment, epipelagic environment, mesopelagic zone, bathypelagic zone, abyssopelagic zone, and benthic environment. These diversified divisions of the aquatic world harbors heterogeneous species of marine microflora and microalgae. Therefore, summing all the types of microflora and microalgae, and their extracted bioactive chemical metabolites, would be too tedious to elaborate in a single article. Thus, only certain specific microflora including bacteria, fungus, and microalgae (cyanobacteria), along with their potent bioactive metabolites displaying anticancer activity are emphasized. The most common bioactive compounds having anticancer activity from these marine sources are alkaloids (staurosporine, ambigols, amycolactam, and marinoquinoline A), polyketides (chromone, engyodontiumones H, pestalpolyol I, hytidchromone A, B, C, and E), terpenes (meroterpenes, diterpene, and scopararane I), peptides (beauvericin, polymyxin B and other non-ribosomal peptides), nucleosides (cytarabine, gemcitabine and other nucleoside analogues) and carbohydrates (laminaran, alginic acid, and other sulfated polysaccarides) [17][18][19].

Microflora and, up to a certain extent, microalgae could be regarded as chief drivers of nutrient transformations in a marine ecosystem. Shift in abiotic factors of marine ecosystem, such as temperature, salinity, nutrients, oxygen, solar energy, water clarity, tides, waves, aerial exposure and current has immensely influenced the production and secretion of marine metabolites/ bioactive chemical compounds from these organisms. To survive under these harsh abiotic factors, the marine microflora tends to form a symbiotic relationship with other marine microorganisms. These synergetic relationships enable them to endure and secrete a number of exotic secondary metabolites/bioactive compounds which they would not do under natural circumstances [20]. Over the last two decades, natural product research has observed a paradigm shift from terrestrial areas to oceans. Approximately 15,000 marine-origin metabolites, which have demonstrated cytotoxicity in cancer models, have been identified during the past three decades and from these, 28 agents are under clinical trials for their anticancer properties [21]. There is myriad of structural motifs undiscovered from the marine ecosystem and these metabolites can serve as new potent anticancer agents.

Komodoquinone A (1) (Figure 1), produced by Streptomyces sp. KS3. This is a new anthracycline that caused neurotogenesis (process of forming new neurites) in the neuro 2A neuroblastoma cell line [22]. 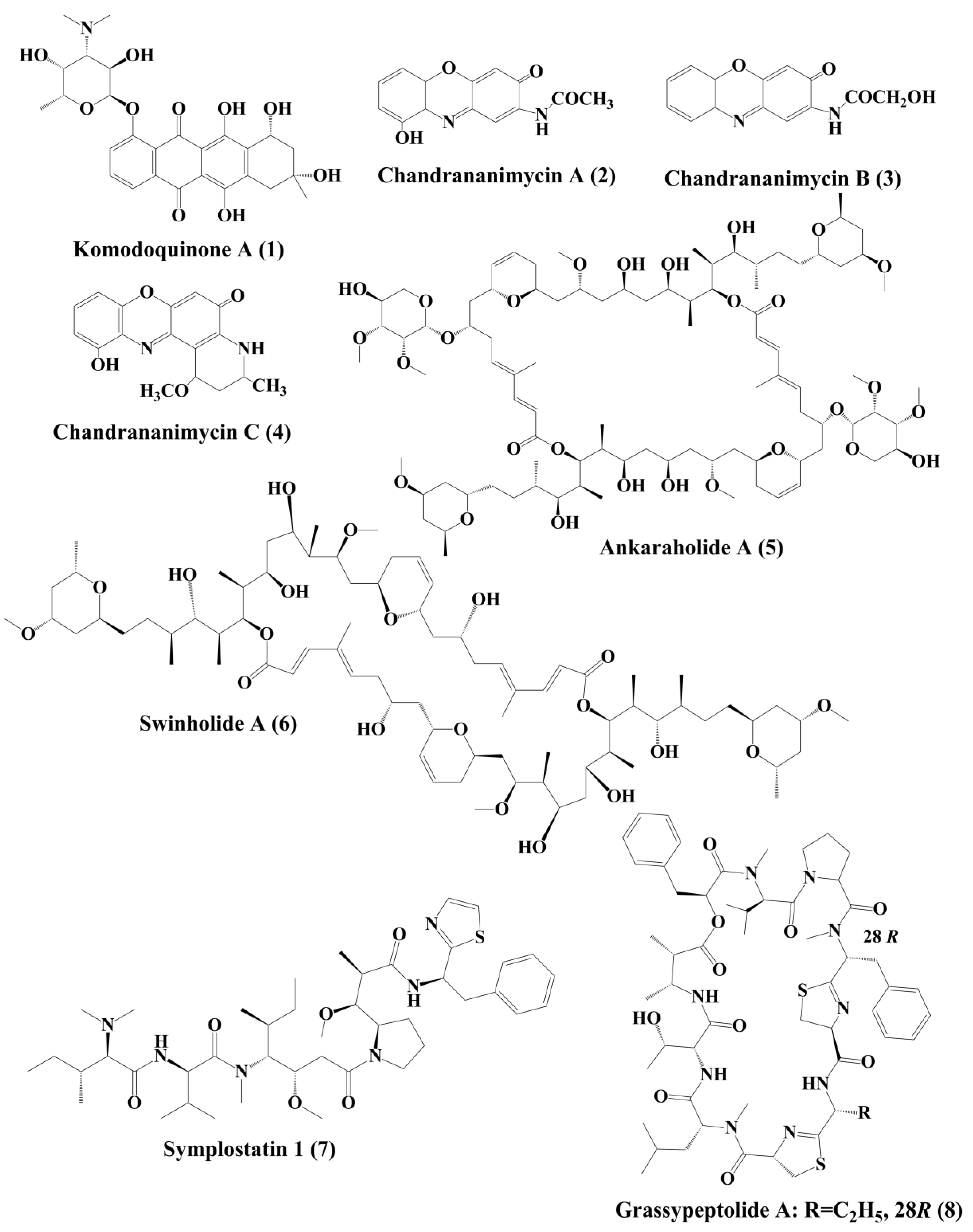 Ankaraholide A (5) is a glycosylated swinholide compound, which is procured from Geitlerinema sp. [24]. It inhibited the proliferation of NCI-H460, Neuro-2a, and MDAMB-435 cells [25]. Swinholide A (6) was initially obtained from the marine sponge Theonella swinhoei. Later, it was also reported to be the metabolites of the marine cyanobacterium Symploca sp. It exhibited its antitumor activity by disruption of actin [24].

Symplostatin 1 (7) (Figure 1) is an analogue of dolastatin 10, isolated from Symploca hydnoides, a marine bacterium. The antimitotic activity of symplostatin was shown against a panel of cancer cell lines, such as MDA-MB-435, SK-OV-3, NCI/ADR, A-10, and HUVEC [26]. It also showed profound antitumor activity against murine colon 38 and murine mammary 16/C carcinoma cells. This metabolite triggered the phosphorylation of Bcl-2, micronuclei formation, caspase-3 activation, and induced apoptosis that led to cell cycle arrest at the G2/M phase. It also prevented the accumulation of tubulin [26]. Grassypeptolideis a macrocyclic depsipeptide formed by the cynobacteria Lyngbya confervoides [27]. It showed cytotoxic antiproliferative activity against various cell lines, such as human osteosarcoma (U2OS), cervical carcinoma (HeLa), colorectal adenocarcinoma (HT-29), and neuroblastoma (IMR-32) cell lines [27]. Grassypeptolide A (8) (Figure 1), B (9) and C (10) (Figure 2), significantly inhibited the proliferation of colorectal adenocarcinoma (HT-29) cell lines and cervical carcinoma (HeLa) cell lines in a concentration-dependent manner by inducing cell cycle arrest at either G1 the phase or G2/M phase[28].

Curacin A (11) (Figure 2), a linear and complex hybrideketopeptide, was the first curacin that was isolated from extracts of the Caribbean cyanobacterium Lyngbya majuscule [29]. After curacin A, other curacin compounds, namely curacin B, C, and D, were also identified as the constituents of L. majuscule [30]. Amongst these, curacin A was the most active anticancer compound that inhibited the proliferation of non-small cell lung cancer cells (A549) by triggering apoptosis and causing cell cycle arrests in the G2/M phase [31]. It acts by binding to tubulin at colchicine binding site and acting as a competitive antagonist, and tubulin polymerization inhibitor [32]. Its structural activity relationship (SAR) studies indicated that the existence of four double bonds, a conjugated diene, a readily oxidized thiazoline heterocycle, and high lipophilicity are the factors that govern the pharmacological function of curacin A [33]. Various analogues were prepared, but they exhibit activity, lower than that the parent compound [34].

Marine resources certainly have valuable and undiscovered biochemical versatility and demonstrate a greater opportunity for the development of new anticancer agents. While a variety of compounds have been identified to suppress cell growth in a broad spectrum of cancer cell types, the mechanism of action still remains unclear. A handful of marine molecules have demonstrated possible cytotoxic actions toward specific cancer by inhibition of cell proliferation, its antimitotic behavior (anti-tubulin impacts), induced apoptosis and inhibition of movement, invasion, or metastatic potential of cancer cells.

While these metabolites have shown potential for cancer treatment, there are several challenges associated with the development of these drugs that need consideration. Oceans certainly provide a large supply of valuable species, but the researchers still cannot access any of these regions. For years, the selection of entities in readily accessible places was preferred. Therefore, the problem is that marine research is not always easily accessible where researchers and the oceanographer need to have strong working ties. Genetic engineering is undergoing development in order to enhance drug production through the conversion of genetic data from the target compound into the host cells. It is an important field for regulation of the isolation and expression of aquatic genes, helping us produce lead compounds from the aquatic ecosystem in a more controlled way. Secondary metabolites are hard to produce independently from cultures, since their development is directly or indirectly dependent on the host. Therefore, several of the main genes stay silent while these things are attempted to evolve In vitro. Another big concern is that the development of a specific molecule requires sufficient resources. There is still little research available on the toxicity studies of these marine metabolites in normal cells; this has to be addressed.

Marine cyanobacteria and microalgae tend to be an effective source of anticancer drugs. Nevertheless, more studies are required to understand the basic targets and pathways behind the cytotoxicity of these compounds in cancer cells.

More
© Text is available under the terms and conditions of the Creative Commons Attribution (CC BY) license; additional terms may apply. By using this site, you agree to the Terms and Conditions and Privacy Policy.
Upload a video for this entry
Information
Subjects: Oncology
Contributor MDPI registered users' name will be linked to their SciProfiles pages. To register with us, please refer to https://encyclopedia.pub/register :
Sabyasachi Banerjee
View Times: 586
Revisions: 2 times (View History)
Update Time: 30 Sep 2020
Table of Contents
1000/1000
Hot Most Recent