Submitted Successfully!
Thank you for your contribution! You can also upload a video entry related to this topic through the link below:
https://encyclopedia.pub/user/video_add?id=22473
Check Note
2000/2000
MERCs in Glioblastoma
Edit

Glioblastoma (GB), also known as glioblastoma multiforme, is the most aggressive type of astrocytoma. GB derives both from glial and glioma stem cells and affects glia and astrocytes. Gliomas are heterogeneous neoplasms, classified into grade I to IV according to their malignancy and the presence of specific histological/molecular hallmarks. The higher grade of glioma is known as glioblastoma (GB). Although progress has been made in surgical and radiation treatments, its clinical outcome is still unfavorable. The invasive properties of GB cells and glioma aggressiveness are linked to the reshaping of the cytoskeleton. Recent works suggest that the different susceptibility of GB cells to antitumor immune response is also associated with the extent and function of mitochondria–ER contact sites (MERCs).

Considering the role of MERCs in the maintenance of cell homeostasis, it is not surprising that some experimental reports highlighted their contribution to the etiology of different types of tumors, including GB.
A first link between MAMs and cancer has been shown in case of the protein promyelocytic leukemia (PML), a nuclear tumor suppressor protein, which has been located at MERCs. Here, PML modulates the IP3R-Akt axis trough the regulation of Ca2+ transfer from the ER to the mitochondria and ultimately induces pro-apoptotic signaling [1]. Notably, the Akt pathway has been also connected with the increased tumorigenicity, stem cell-ness, and invasiveness of GB cells [2]. This could strengthen the MERCs-dependent effect on glycan expression that has been associated with enhanced migration abilities and diverse susceptibility to cytotoxic lymphocyte-mediated killing of GB cells [3]. Interestingly, studies on MERCs ultrastructure in surgical specimens obtained from human astrocytic neoplasms revealed a striking difference among well-differentiated glioma cells and poorly differentiated glioma like-stem cells. The latter appeared almost deprived of MERCs [4]. Although this finding is interesting, it remains unclear whether this is a typical feature of stem cells and of stem cell-like cells, which could be MERCs contribution to glioma stem cells physiology. Notably, glioma stem cells appear less glycolytic than their differentiated counterparts and rely mainly on oxidative phosphorylation [5]. At variance, differentiated GB cells were reported as “MERCs-enriched”, with MERCs driving mitochondria functionality and sustaining their metabolic demands [6].
Another protein important in the context of tumors is the cytoskeleton-binding protein trichoplein/mitostatin (TpM), which binds the major intermediate filaments of epithelial cells. TpM acts as a negative modulator of ER–mitochondria juxtaposition, inhibiting apoptosis induced by Ca2+-dependent stimuli through interaction with MFN2 [7]. Interestingly, TpM is involved in the formation of the primary cilium, a dynamic protrusion present in virtually every type of cell that senses extracellular signals and coordinates the subcellular responses with the progression of cell cycle, proliferation, and differentiation. This is particularly interesting in the context of GB, since aberrant ciliogenesis has been proposed as an early event of GB etiology [8][9]. The potential contribution of TpM to carcinogenesis is corroborated by findings that regards other types of solid tumors. As an example, it has been demonstrated that TpM inhibits cell migration, invasion, and tumorigenicity of prostate cancer cells, and that it is down-regulated in advanced stages of human prostate cancers [10]. All these data suggest that TpM can act as a tumor suppressor: however, it has not been clarified whether these findings are due to altered TpM function at MERCs or to variations of its extra-MERCs physiological roles.

2. MERCs and Microtubules Crosstalk in Glioblastoma

Considering the role of the latter in the maintenance of the cell bioenergetics, signaling, and migration abilities, the question rises as to whether and how MERCs and MTs contribute and coordinate their activities during GB growth and diffusion into different brain regions. The finding that the interaction between tubulin and the MERCs–resident protein VDAC1 actively controls the cell metabolism in muscle and in cell models of neuroblastoma and breast cancer hints at this possibility [11]. Data from different cell models support the idea that tubulin can control mitochondrial respiration by diminishing the VDAC-mediated permeability of the OMM to ATP, ADP, and other metabolic substrates [12][13]. It is tempting to speculate that this could be a mechanism to shape mitochondrial respiration and support the metabolic changes that characterize GB [14]. Interestingly, VDAC1 binding to tubulin dimers and the consequent blockage of its activity is controlled by phosphorylation either by glycogen synthase kinase-3β or by cyclic AMP-dependent protein kinase (PKA), whose expression differs in glioma cells with respect to normal tissue [15][16][17]. Theoretically, altered levels of these kinases could influence the levels of phosphorylated VDAC1 and in turn influence its tubulin binding, a possibility that has not yet been demonstrated in the context of GB.
In addition, several recent studies have utilized high-throughput genomic, epigenomic, and transcriptomic approaches for detailed molecular characterization of GB. A recent proteomic study found that cells derived from GB patients upregulate the expression not only of cytoskeletal (vimentin, α- and β-tubulin, β-actin, and glial fibrillary acidic protein), but also of mitochondrial (aldehyde dehydrogenase and manganese superoxide dismutase) and MERCs/ER-resident chaperone proteins (GRP-75, GRP-57, and HSP27) [17].
To provide details on the crosstalk among MERCs and the cytoskeleton in glial cells tumors, the researchers took advantage of published genome-wide gene expression analyses to evaluate alterations occurring during GB progression. The researchers identified differentially expressed genes (DEGs) in GB considering two GEO datasets that are unique because they were obtained upon analysis of human GB biopsies (GSE147352 and GSE79878) [18]. These datasets include 93 glioblastoma, 18 glioma, and 15 normal samples studied though two different techniques: microarray and RNA sequencing.
DESeq normalized read counts were used to identify differentially expressed genes using the AltAnalyze software [19]. Genes were considered as differentially expressed whenever their fold change would be > 2 and p-value < 0.05.
In case of microarray gene expression analysis, the researchers excluded lincRNAs from the analysis before normalizing data because they are lower expressed than coding RNAs, as the resarchers did in [20]. Raw data with gene expression information for coding genes were quantile normalized using R, and the expression of each gene was calculated as the average of multiple probes for the same gene with an intensity fluorescence significantly above the background (using the filter gIsPosAndSignif in the Agilent microarray quantification files [21]). DEGs were identified using TMev_4.8.1 software (Quantitative Biomedical Research Center, Harvard T.H. Chan School of Public Health, Boston, USA) [22] (www.mev.tm4.org, accessed on 5 April 2022). Genes were considered altered when fold change was > 1.5 and p-value < 0.05. DEGs were categorized according to Gene Ontology (GO) using the Panther 17.0 database [23] (www.pantherdb.org, accessed on 17 January 2022) and GO terms were reduced using the REVIGO tool with default parameters [24]. Downregulated genes in GB were involved in neuronal functions as the formation of neuron projection or in the excitatory of GABAergic signal. The list of upregulated genes in GB was also enriched of molecules controlling cytoskeletal and mitochondrial functions (Figure 1). By analyzing RNAseq data (GSE147352) (microarray analyses are based on the comparison between gliomas grade I and GB grade IV), the reseachers highlighted that genes associated with ER are also expressed (Figure 1A). 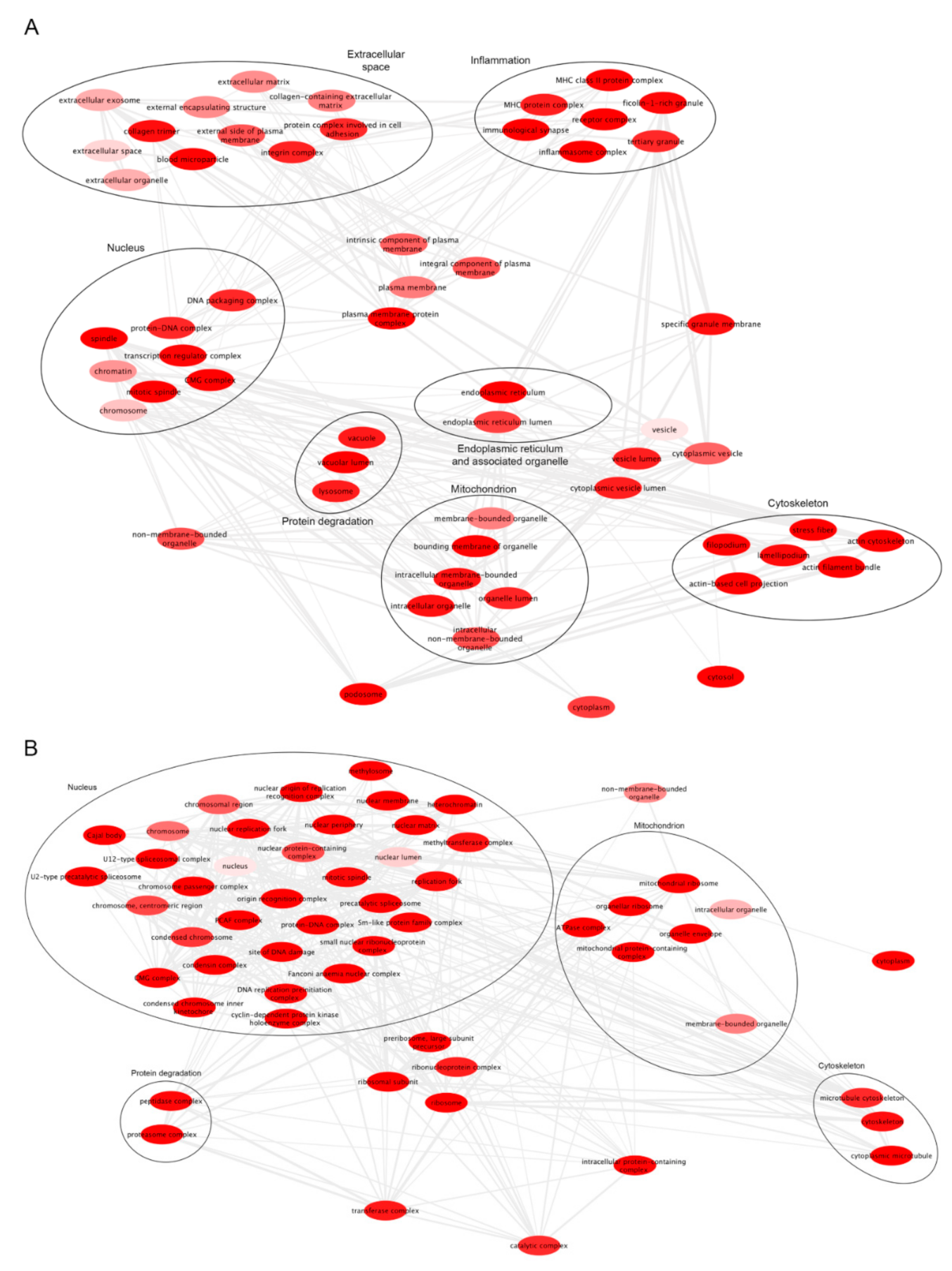 Figure 1. Enriched GO terms. (A). GO enrichment from upregulated genes in GB from GSE147352 dataset. (B). GO enrichment from upregulated genes in GB grade IV from GSE79878 dataset. The bubble color indicates the FDR for the GO term (bright red lower FDR). Highly similar GO terms are linked by edges in the graph.
The researchers then evaluated alterations in genes involved in the synthesis of MERCs proteins. Using normal samples as control, the researchers found that 37% (62 of 169) of genes coding for MERCs proteins were altered in GB, and 22% (38 of 169) were altered in glioma tumors (Figure 2). Interestingly, most of the genes coding for proteins controlling MERCs formation were also differentially expressed in glioblastoma samples. Genes most downregulated in glioblastoma are also highly expressed in glioma (JPH1, SNCA, ITPR1, and FRAS1). On the other hand, those highly expressed in glioblastoma (CAV1, TP53, TMX1, MTTP, RAB32, ITGB1, PEMT, SOAT1, BAX, PKMYT1) are not altered in glioma (Figure 2). Genes involved in MAMs formation whose expression was altered only in glioma samples were FUNDC1, FACL4, VDAC1, ATP6AP2, CISD2, ERO1A, TP53I11, MAVS, and CDK5RAP3, while those altered only in GB and not in gliomas were TDRKH, SOAT1, LMAN1, TRIM4, CAV1, BAX, ITGB1, SEC61B, PDIA6, CFLAR, RAB32, MTTP, TMPO, ELOVL1, PKMYT1, p66shc/SHC1, PEMT, LRRC59, BET1, TBL2, ALG9, TOMM5, SERAC1, TCHP, VMA21, RPS7, PTRH2, ATG5, CHCHD2, SCD5, SERP1, PCCA, and CKAP4. 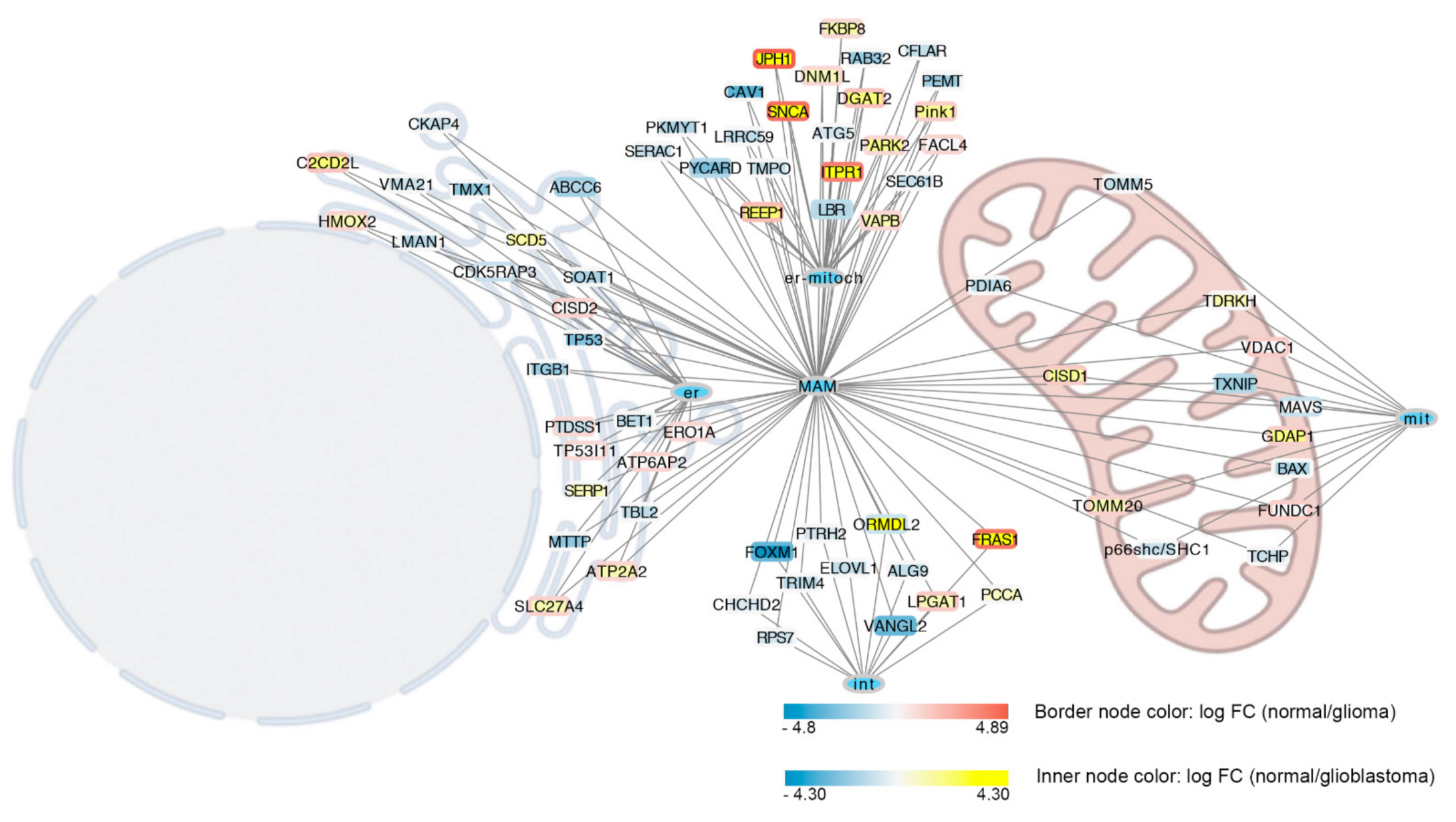 Figure 2. Differentially expressed genes involved in MERC interactions. Genes associated to MERC interactions are represented according to subcellular localization of coded proteins. Proteins specifically localized in the endoplasmic reticulum are associated with the node labelled as er, those associated with mitochondria are associated with the node labelled with mit, and those localized both in ER on in the mitochondria are associated with the node labelled with er–mitoch. Proteins involved in MERCs according to [12] not specifically associated with ER or mitochondria were linked to a node labelled with int. All nodes are linked to the MERCs node because all are involved in the formation of MERCs. MERCs, ER, mitochondria, and ER–mitochondria nodes are colored with light blue while other nodes are colored according to the log FC expression of control versus high grade glioblastoma. Differently node border is colored according to the log FC expression of control versus glioma. Blue indicates highly expressed in the tumor, yellow or red in the control, and white indicates non-differences.
Among the identified DEGs, CKAP4, Cytoskeleton-associated protein 4, appears particularly interesting. The corresponding protein is also known as Cytoskeleton-Linking Membrane Protein 63 (CLIMP-63) or p63, because it is a reversibly palmitoylated protein located in ER which stabilizes the ER structure and mediates the interaction of this organelle with MTs [25]. Notably, CKAP4 plays a role in maintaining mitochondrial functions through binding to VDAC2 at ER–mitochondria contact sites [26]. It also forms a complex with PI3K upon the binding of Dickkopf WNT Signaling Pathway Inhibitor 1 (DKK1), leading to the activation of Akt, which has been implied in glial cell tumors, as specified above. Both DKK1 and CKAP4 are frequently expressed in pancreatic and lung tumors, and their simultaneous expression is inversely correlated with cancer prognosis [27].
Another important interactor protein of CKAP4 is VIMP, Valosin-containing protein-interacting membrane protein (VIMP): together, they link the ER with microtubules [28]. Indeed, VIMP contributes to the organization of the ER acting as a scaffold for CLIMP-63 and polymerized MTs. Interestingly, the researchers identified VIMP among the cytoskeletal genes upregulated in GB, suggesting the possibility that VIMP and CKAP4 could integrate the mitochondria–ER and cytoskeleton dynamics and functions, potentially contributing to the progression of GB.