+1 point
Thank you for your contribution! You can also upload a video entry related to this topic through the link below: https://encyclopedia.pub/user/video_add?id=22217
Check Note
2000/2000
β-Caryophyllene in Oxidative Stress and Mitochondrial Dysfunction

Mitochondrial dysfunction results in a series of defective cellular events, including decreased adenosine triphosphate (ATP) production, enhanced reactive oxygen species (ROS) output, and altered proteastasis and cellular quality control. An enhanced output of ROS may damage mitochondrial components, such as mitochondrial DNA and elements of the electron transport chain, resulting in the loss of proper electrochemical gradient across the mitochondrial inner membrane and an ensuing shutdown of mitochondrial energy production. Neurons have an increased demand for ATP and oxygen, and thus are more prone to damage induced by mitochondrial dysfunction. Mitochondrial dysfunction, damaged electron transport chains, altered membrane permeability and Ca2+ homeostasis, and impaired mitochondrial defense systems induced by oxidative stress, are pathological changes involved in neurodegenerative disorders. A growing body of evidence suggests that the use of antioxidants could stabilize mitochondria and thus may be suitable for preventing neuronal loss. Numerous natural products exhibit the potential to counter oxidative stress and mitochondrial dysfunction; however, science is still looking for a breakthrough in the treatment of neurodegenerative disorders. β-caryophyllene is a bicyclic sesquiterpene, and an active principle of essential oils derived from a large number of spices and food plants. As a selective cannabinoid receptor 2 (CB2) agonist, several studies have reported it as possessing numerous pharmacological activities such as antibacterial (e.g., Helicobacter pylori), antioxidant, anti-inflammatory, analgesic (e.g., neuropathic pain), anti-neurodegenerative and anticancer properties.

Mitochondrial dysfunction refers to an impairment in mitochondrial function, resulting in a series of defective cellular events including decreased adenosine triphosphate (ATP) production, enhanced reactive oxygen species (ROS) output, altered proteostasis and cellular quality control [1]. Neurons have increased demand for ATP and oxygen, with cortical neurons being known to consume approximately 4.7 billion ATP molecules per second, and thus they are more prone to the damage induced by mitochondrial dysfunction [2]. Such critical requirements for ATP and oxygen make them susceptible to electron leakage from the electron transport chain, resulting in generation of free radicals and induced oxidative stress [3]. Furthermore, lowered levels of antioxidant defenses further increase the neuronal susceptibility to mitochondria induced oxidative damage [4]. In addition, a large ROS output not only damages the biomolecules of the neuronal cells, but also damages mitochondrial components (e.g., mitochondrial DNA) and elements of the electron transport chain, resulting in a loss of electrochemical gradient across the mitochondrial inner membrane and the ensuing shutdown of mitochondrial energy production [5].
The electron transport chain, or mitochondrial respiratory chain, consists of five complexes (complex I, II, III, IV and V) and is one of the major structural and functional components of mitochondria, catalyzing the phosphorylation of adenosine diphosphate (ADP) to ATP [6]. These complexes are comprised of over 80 proteins, 13 of which are encoded by mitochondrial DNA and are components of oxidative phosphorylation [6][7]. Complexes I–IV constitute the electron transport chain, which generates water by oxidation of hydrogen (derived from organic acids like pyruvic and fatty acids) with atomic oxygen [8]. ATP production involves two coordinated processes, including transport of electrons along the complexes to produce water and the pumping of protons across the mitochondrial inner membrane (from matrix to intermembrane space) through complexes I, III and IV. ATP is thus generated by the influx of these protons back to the matrix through complex V [9][10][11]. Under normal physiological conditions, 1.5% of the oxygen may be converted into ROS, which suggests that the majority of intracellular ROS is generated by mitochondria [12]. The production of superoxide and other reactive oxygen species occurs primarily at complexes I and III [13]. Under pathological conditions, the highly reactive hydroxyl ions could damage mitochondrial DNA, proteins, and lipids, resulting in the defective functioning of complexes I and III, causing superoxide radical formation by increased electron reduction of oxygen, leading to metabolic oxidative stress, genomic instability, and cellular injury [14][15][16][17].
Damaged mitochondrial DNA may decrease the expression of critical proteins of the electron transport chain, amplifying oxidative stress which eventually triggers apoptosis [14]. The electron transport chain is also sensitive to nitrosative stress, as nitration can modify mitochondrial proteins, causing alterations in the functioning of many metabolic enzymes in the electron transport chain, such as nicotinamide adenine dinucleotide (NAD) dehydrogenase, cytochrome c oxidase, and ATP synthase [18]. Most importantly, acute exposure to ROS inactivates the iron-sulfur centers of complexes I, II and III, while chronic exposure can damage cellular and mitochondrial proteins, lipids, and genetic materials [7]. ROS also alters mitochondrial membrane permeability, as the inner membrane is located near the site of ROS production and thus is more prone to lipid peroxidation [19]. Peroxidation of mitochondrial phospholipids may increase the proton permeability of the inner membrane, which under normal physiological conditions is permeable only to tiny neutral molecules [20]. Increased membrane permeability could lead to altered fluidity, as well as impaired biochemical functions of numerous transporters and enzymes present in mitochondrial membranes [12].
Mitochondria play a critical role in regulating neuronal Ca2+ homeostasis, and genetic and pharmacologic manipulations enhancing mitochondrial Ca2+ sequestration may protect neuronal cells against excitotoxicity [21]. Excessive ROS generation alters mitochondrial Ca2+ homeostasis, where peroxynitrite inactivates key mitochondrial enzymes, affecting the energy status of the cell and triggering the release of Ca2+ from the mitochondria [22]. Elevated Ca2+ levels cause a shift in mitochondrial potential and result in the production of superoxide radicals which may lead to a vicious cycle. Changes in mitochondrial permeability in Ca2+ overloaded mitochondria result in osmotic swelling and the rupture of the outer mitochondrial membrane [23]. ROS production in mitochondria further promotes Ca2+ uptake and enhances membrane permeability, and eventually results in the release of cytochrome c and the initiation of apoptosis [24]. Figure 1 depicts the links between oxidative stress and mitochondrial dysfunction, and their possible impact on aging and disease development and progression. 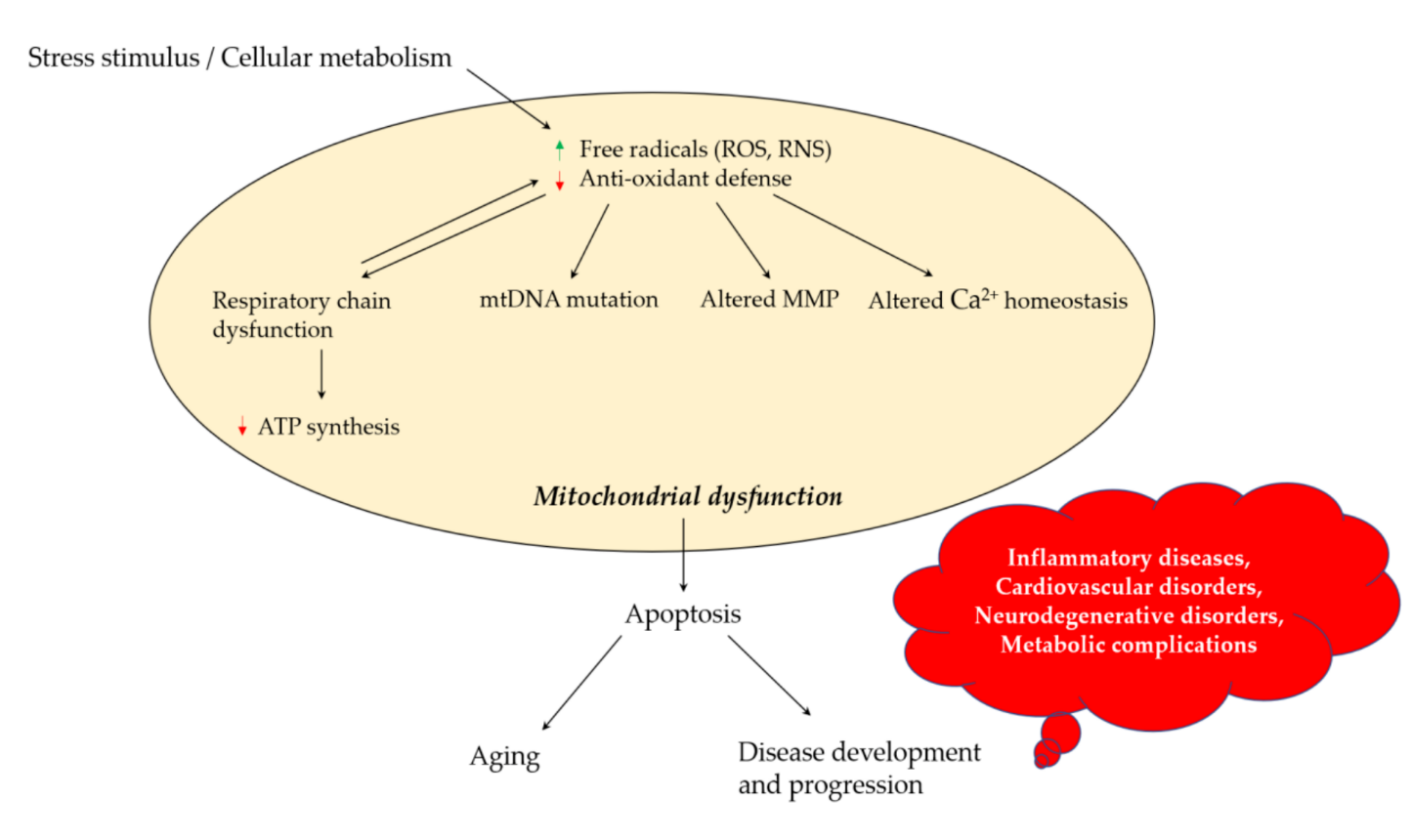 2. Chemistry and Vegetable Sources of β-Caryophyllene 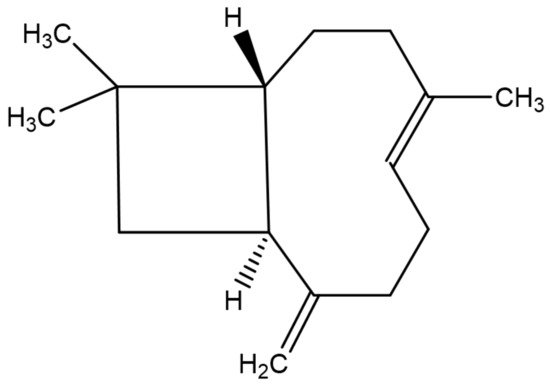