+1 point
Thank you for your contribution! You can also upload a video entry related to this topic through the link below: https://encyclopedia.pub/user/video_add?id=22216
Check Note
2000/2000
Targeting the Neural Circuits for Treating Alzheimer’s Disease

Alzheimer’s disease (AD) is a neurodegenerative disease accompanied by cognitive and behavioral symptoms. These AD-related manifestations result from the alteration of neural circuitry by aggregated forms of amyloid-β (Aβ) and hyperphosphorylated tau, which are neurotoxic. From a neuroscience perspective, identifying neural circuits that integrate various inputs and outputs to determine behaviors can provide insight into the principles of behavior. Therefore, it is crucial to understand the alterations in the neural circuits associated with AD-related behavioral and psychological symptoms. Interestingly, it is well known that the alteration of neural circuitry is prominent in the brains of patients with AD.

Alzheimer’s disease (AD) is the most common type of dementia in the elderly and is a significant health problem worldwide. The incidence of AD increases with age, with nearly 35% of 85-year-olds suffering from AD [1][2]. AD has been characterized by the aggregation and accumulation of amyloid-β (Aβ) and hyperphosphorylated tau. In addition, AD is a progressive neurodegenerative disease in which cognitive impairment is the main symptom [3]. Moreover, the secondary symptoms are as follows: psychiatric, sensory, and motor dysfunctions [4][5]. Therefore, AD treatment should inhibit cognitive decline and induce various clinical symptoms [6]. Based on many theories and hypotheses, many clinical trials are underway to treat AD. The U.S. Food and Drug Administration has recently approved an Aβ-binding monoclonal antibody, aducanumab (Aduhelm), through an accelerated approval pathway [7]. Although aducanumab may be beneficial in reducing in amyloid plaques in the brains of AD patients, it is not associated with behavioral improvement. Therefore, definitive treatment for cognitive and behavioral deficits is required.
Neural circuits are the main mediators of various behaviors controlled by the brain, from simple functions to complex cognitive processes [8]. Interestingly, it is known that Aβ and tau have been progressively impaired the synapses, neuronal circuits, and neural networks in the brain with AD [9][10]. Several studies using neural tracing and radiological imaging, such as diffusion tensor imaging (DTI) and functional magnetic resonance imaging (fMRI) have shown that neural pathways are altered in AD brains [11][12][13]. Damage to neural circuits in the AD brain can result in cognitive impairment, such as memory deterioration [14]. In addition, it has been suggested that the alterations in neural circuits and network function due to pathological changes in synaptic plasticity might be associated with several clinical symptoms, such as sensory and motor dysfunctions [4]. Interestingly, clinical studies have shown changes in the sensory systems of patients with early-stage AD, and that these changes take precedence over cognitive impairment [15][16][17]. From this perspective, neural circuitry could be a target for treating various symptoms of AD. Therefore, the researchers selected the brain regions involved in changes in cognition and several clinical manifestations of AD, and summarized the alteration of efferent pathways from these AD-associated brain regions.
The challenge for neuroscience is to visualize the essential structural elements of the brain from the perspective of neural connections related to behaviors [12][18]. For the visualization of the neural connectivity or network related to behavior, there are three levels of brain connectivity: macroscale, mesoscale, microscale [19]. The macroscale connectome anatomically represents inter-area connections between distinct brain regions and shows the most large-scale connection patterns in the brain. In particular, DTI and fMRI are widely used to infer structural and functional connections in the living brain [20]. The microscale connectome represents the level of pre-and post-synaptic connections between single neurons. Microscale studies use electron and light microscopy to demonstrate neural connections at the ultrastructural level [21]. The mesoscale connectome represents intercellular connections between different neurons across different brain regions. In addition, mesoscale connectivity provides a detailed understanding of the cell-type composition of different brain regions, and the patterns of inputs and outputs that each cell type receives and forms, respectively [22]. Therefore, the mesoscale connectome can connect information collected at the level of both macroscale and microscale connectivity. In addition, at the mesoscale level, both long-range and local connections can be described using a sampling approach with diverse neuroanatomical tracers that enable whole-brain mapping in a reasonable time frame across many animals [23].
To understand AD-related cognitive, behavioral, and psychological symptoms, a precise connection of neural circuits should be examined. Moreover, understanding the alterations of neural circuits in the brain with AD might provide a better understanding of possible treatments that substantially affect the progression of AD.

2. Targeting the Neural Circuits for Treatment of AD

This entry provided a summary of altered neural pathways at the mesoscale level (Table 1) and other levels in AD brains (Figure 1). The alteration of neural pathways, leading to cognitive decline and behavioral impairment, is an important pathology directly related to AD symptoms. Thus, the researchers emphasize the importance of neural pathways for understanding the pathological processes and clinical symptoms of AD. Furthermore, the researchers discussed the therapeutic implications of approaches to targeting the neural circuits in AD. Several studies and clinical trials have suggested that therapeutic methods to enhance the activity and connectivity of neural circuits are effective in ameliorating AD pathogenesis. Taken together, the researchers conclude that strategies targeting altered neural pathways in the AD brain are potent therapeutic targets for the treatment of AD. Thus, more research is needed, to examine the alterations of the neural pathways in the brain with AD and develop the therapeutic approaches that restore or protect neural connectivity in the AD brain.
Table 1. Degeneration of the efferent pathways in the brains of AD mouse models.
Sub—subiculum; DG—dentate gyrus; DTT—diffusion tensor tractography; DTI—diffusion tensor imaging; GABA—gamma-aminobutyric acid; LC—locus coeruleus; MS—medial septum; NAc—nucleus accumbens; OB—olfactory bulb; RSg—granular division of retrosplenial cortex; SN—substantia nigra. The right arrow indicates the direction of projection, and the down arrow indicates decreased connectivity. 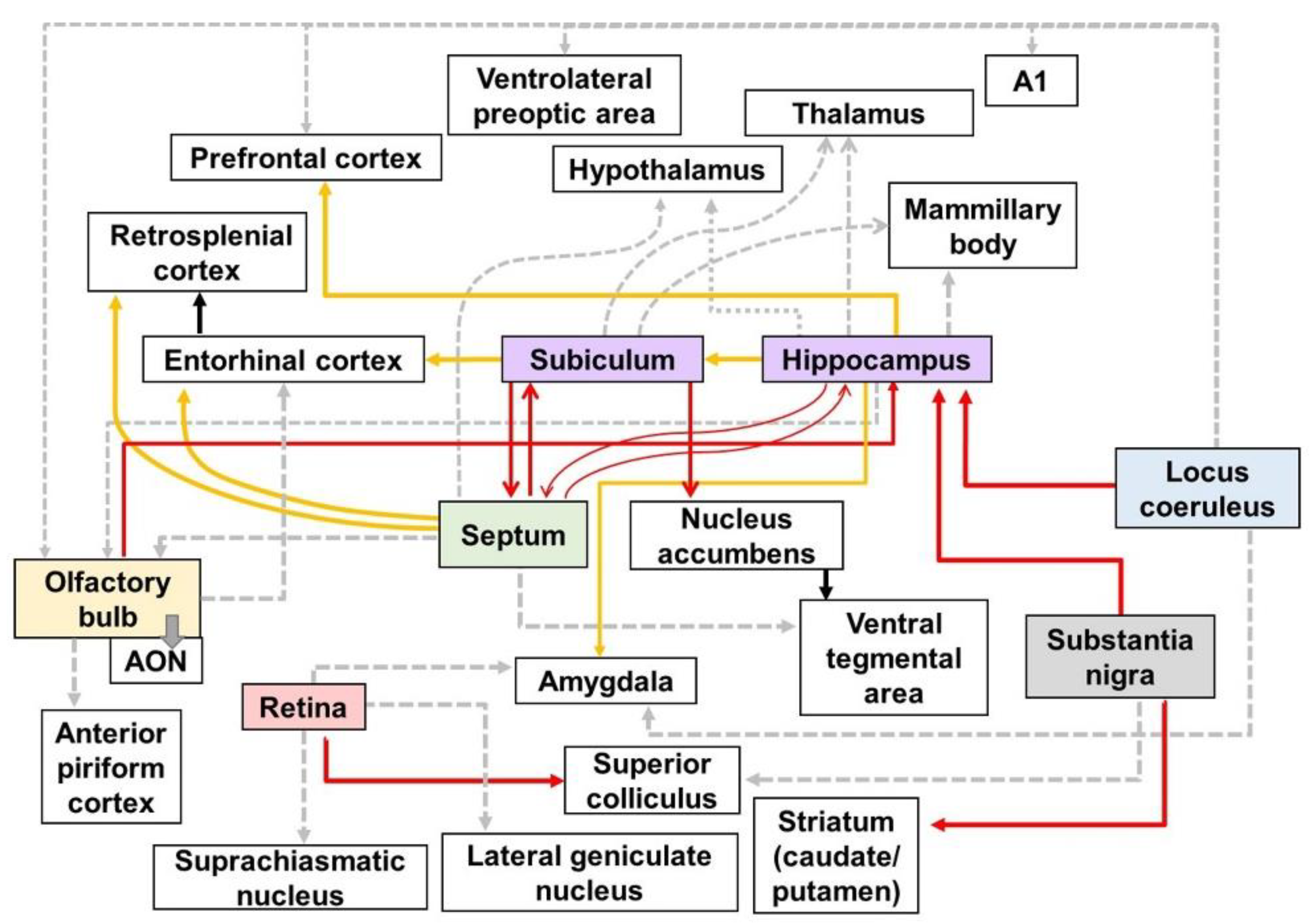 Figure 1. Schematic diagram of altered connections in the AD brain: Red, yellow, and gray lines directed away from the boxes represent efferent fibers which have synaptic contact with each other. The red lines show the altered efferent pathways in AD brain using the neural tracers identified in Table 1. The yellow lines indicate the output pathways that were investigated using various methods, such as electrophysiology, biomedical imaging technologies, and immunohistochemical stanning. The gray dotted lines represent the efferent pathways that affect various symptoms of AD, although the alteration in the connectivity of gray dotted lines has not been directly visualized. A1—primary auditory cortex; AON—anterior olfactory nucleus.