+1 point
Thank you for your contribution! You can also upload a video entry related to this topic through the link below: https://encyclopedia.pub/user/video_add?id=22130
Check Note
2000/2000
Cutaneous Flavonoid Delivery System

Flavonoids are one of the vital classes of natural polyphenolic compounds abundantly found in plants. Due to their wide range of therapeutic properties, which include antioxidant, anti-inflammatory, photoprotective, and depigmentation effects, flavonoids have been demonstrated to be promising agents in the treatment of several skin disorders. However, their lipophilic nature and poor water solubility invariably lead to limited oral bioavailability. In addition, they are rapidly degraded and metabolized in the human body, hindering their potential contribution to the prevention and treatment of many disorders. Thus, to overcome these challenges, several cutaneous delivery systems have been extensively studied. Topical drug delivery besides offering an alternative administration route also ensures a sustained release of the active compound at the desired site of action. Incorporation into lipid or polymer-based nanoparticles appears to be a highly effective approach for cutaneous delivery of flavonoids with good encapsulation potential and reduced toxicity.

For centuries, flavonoids have been used to treat various human diseases, and despite the fast-growing development of new and innovative synthetic drugs, continuous use of these natural compounds has prevailed to this day [1][2]. Flavonoids are one of the key classes of bioactive compounds abundantly found in plants and have a general structure of a 15-carbon backbone, consisting of two benzene rings connected by a 3-carbon bridge, which forms a heterocycle. They are low-molecular-weight polyphenolic compounds derived from plant metabolites, and the presence of different substitutes creates different subclasses (Figure 1) [3][4][5]. Due to their broad spectrum of biological activity and attractive pharmacological properties, which include antioxidant, anti-inflammatory, antiproliferative, photoprotective, and antiaging effects, flavonoids have been explored as a therapeutic option towards a great number of diseases, including several skin disorders [6][7]. However, their lipophilic nature, which results in a reduced capacity to be orally absorbed, and the fact that they undergo extensive first-pass metabolism and rapid elimination hamper their oral bioavailability [8][9][10]. Thus, alternative research focuses on the development of the cutaneous delivery of flavonoids, with high patient compliance and potential to surpass drawbacks associated with oral and parental routes of administration. Although skin acts as a physical barrier to drug absorption, the development of delivery systems, such as nanoparticles, hydrogels, and microneedles, allows for the delivery of both hydrophilic and lipophilic compounds as well as drugs with shorter half-time and limited therapeutic index. This results in a higher bioavailability at the target site under a controlled release rate and avoids interactions with gastric and intestinal fluids as well as flavonoid degradation [11][12].

Figure 1. Classification of flavonoids based on their chemical structure.

One of the major concerns regarding the use of flavonoids as therapeutic agents is their relatively low bioavailability. Even in the presence of a large daily intake of flavonoids in dietary sources, their plasma and tissue concentrations are often insufficient to exert the desired pharmacological effects [3]. Due to several factors that include chemical structure and molecular weight, relatively low water solubility, absorption and metabolism in the gastrointestinal tract, lack of site specificity in distribution, and rapid elimination, flavonoids have generally low bioavailability, which largely affects their therapeutic potential. Moreover, this class of compounds is highly susceptive to degradation upon oxygen exposure, temperature changes, ultraviolet radiation, or pH change [13][14][15].
After being absorbed by the intestinal epithelium, flavonoids undergo extensive biotransformation into conjugated products, namely glucuronides, sulphates, and methylated derivatives, first in the intestine and then in the liver, where they are secreted into bile [16][17]. Thus, the bioavailability and the subsequent cell and tissue accumulation of the different flavonoids essentially depend on the multidrug-resistance-associated proteins (MRP-1 and MRP-2), ubiquitously expressed as ATP-dependent efflux transporters. The actual flux of a flavonoid from the gut lumen to the blood stream and the various organs depends on the tissue distribution of MRP-1 and MRP-2 as well as on their substrate’s affinity. This metabolic pathway is called phase III metabolism. However, it appears that certain phase II metabolic derivates of flavonoids can act as competitive substrates of the MRP-mediated membrane transporters and the potential use of flavonoids as a mean to overcome transporter-mediated chemotherapy resistance due to the frequent overexpression of MRP in several types of cancer is based on this property. The intestinal absorption of quercetin, for instance, is favored in the aglycone form, and its metabolism in the gut and liver appears to be relatively high, so that less than 2% of ingested quercetin is recovered on the plasma [3]. Additionally, after oral administration of flavonoids, a significant amount can reach the colon and can interact with microbiota. Microbiota can, for instance, metabolize some flavonoids to smaller phenolic compounds with similar biological effects and improved bioavailability; however, on the other hand, it can also extensively metabolize flavonoids via the glucuronidase and sulfatase enzymes, cleaving the heterocycle break and producing inert polar compounds that are rapidly excreted without producing any biological effect [13].
In addition, flavonoids have been reported to significantly inhibit the activity of the cytochrome P450 system, which can result in an increase of the half-life and concentration of many drugs, thus enhancing their toxicity and side effects [18]. Flavonoids such as quercetin, ECG, EGCG, and sylibin have been shown to downregulate the cytochrome CYP3A4, which is the major cytochrome P450 isoenzyme in the intestine and is responsible for the metabolism of approximately 50% of all prescribed drugs, thus increasing the risk of potential toxicity, especially of drugs with a limited therapeutic window [19]. Flavonoids can also interact with ATP-binding cassette (ABC) transporters, inhibiting them, which can increase the bioavailability of poorly available drugs, on the one hand, but it can also potentiate the toxicity of other ABC transporters substrates [20]. Thus, flavonoid encapsulation in effective nano-carrier systems can not only improve their pharmacokinetics and therapeutic potential but also avoid enhancement of the toxicity and side effects of drugs that can concomitantly be administrated with these compounds [13].
The rapid metabolic elimination of flavonoids, together with the evidence that they are able to interact with the metabolism of other drugs, highlights the need to develop novel ways to improve the delivery of flavonoids. Cutaneous administration emerges as an alternative option to common oral and parenteral routes [21][22]. Skin drug delivery is one of the most preferred administration routes with higher patient compliance and satisfaction. The advantages also include the avoidance of liver first pass metabolism effects, metabolic degradation associated with oral administration, and minimal systemic side effects.

3. The Need for Nanocarriers in Cutaneous Flavonoid Delivery

Despite flavonoids’ pharmacological potential, dietary flavonoids present several disadvantages, hindering their clinical potential. In addition, the fact that flavonoids can suffer an enhanced complexation or precipitation when ingested with other food components as well as degradation by microbiota greatly reduces their bioavailability and stability. On that matter, cutaneous delivery is one of the most advantageous routes in overcoming the challenges associated with flavonoid administration [3][13].
Nonetheless, the impermeable nature of the skin presents a serious challenge to cutaneous delivery, where in most of the cases the therapeutic effect produced by the conventional drug dosage is not sufficiently effective. Thus, the development of nano-engineered delivery systems for flavonoids capable of increasing the solubility and bioavailability and of providing a site-specific delivery with improved pharmacokinetic properties is imperative. Thus far, gels are the most common form of topical drug administration, including hydrogels and olegels. However, other delivery systems such as lipid and polymeric nanoparticles, microparticles, and transferosomes, among others, are currently being developed (Figure 2). These carriers can later be formulated into creams and gels, improving patient compliance [5]. 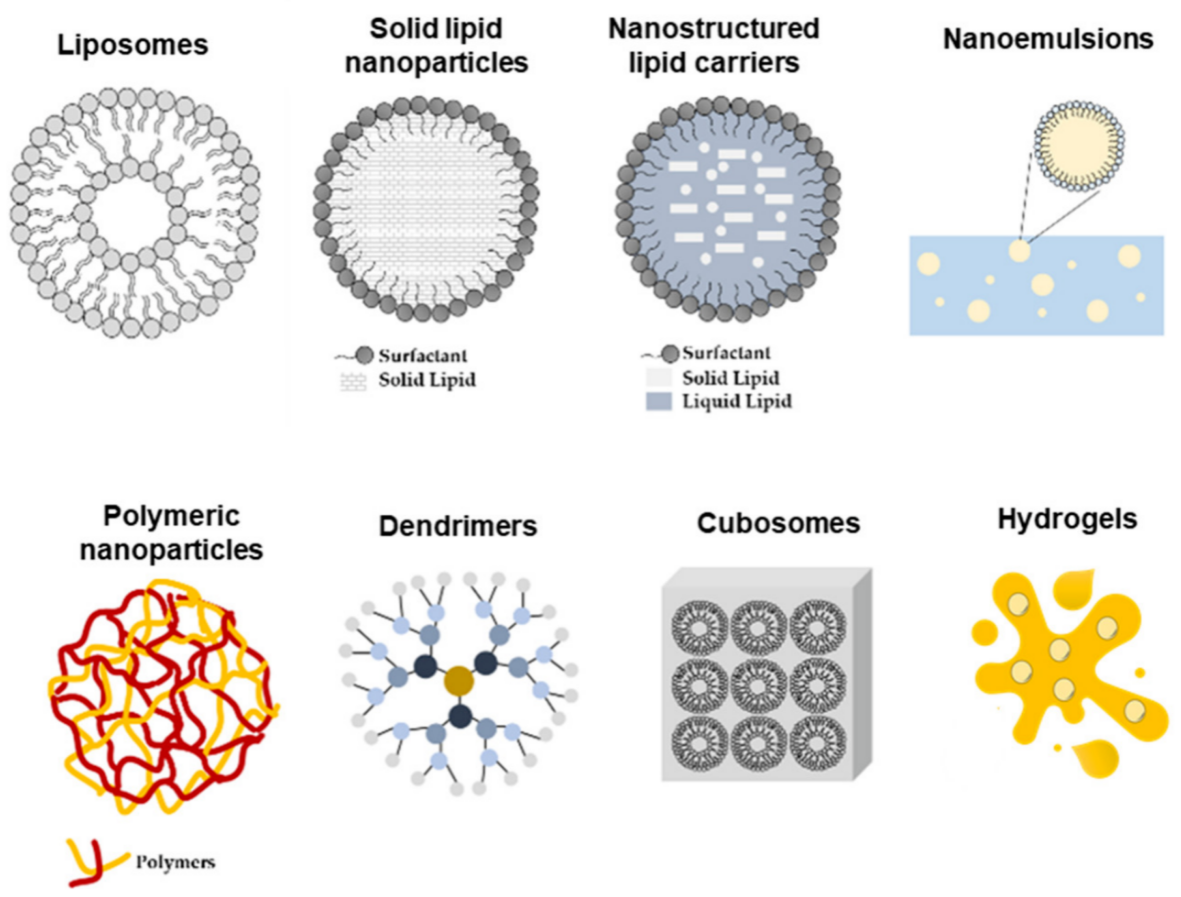 4. Cutaneous Delivery Systems of Flavonoids for Treatment of Skin Pathologies

Cutaneous delivery of flavonoids is a powerful strategy to avoid systemic toxicity while restricting the therapeutic effects to the specific site of action. However, one of the major challenges that a topical delivery system faces is the ability to overcome the SC barrier against foreign substances [5]. In addition, most flavonoids are highly lipophilic compounds and their permeation across the SC into viable skin layers is hindered by their affinity for SC components and the tendency to be retained in this layer. Thus, there has been a growing interest in the use of nanotechnology as a strategy for a more efficient flavonoid delivery to the human body (Figure 3). Nano-delivery systems are in fact excellent tools to overcome the challenges associated not only with the cutaneous absorption of the drug per se but also with flavonoid pharmacology, including low solubility, short half-life, and poor bioavailability [5][23].

4.2. Examples of Nanocarriers Designed for Other Flavonoid Classes’ Topical Delivery

More
© Text is available under the terms and conditions of the Creative Commons Attribution (CC BY) license; additional terms may apply. By using this site, you agree to the Terms and Conditions and Privacy Policy.
Upload a video for this entry
Information
Subjects: Biochemical Research Methods
Contributors MDPI registered users' name will be linked to their SciProfiles pages. To register with us, please refer to https://encyclopedia.pub/register :
Sofia Lima
,
Paula Gameiro
,
Salette Reis
View Times: 231
Entry Collection: Biopharmaceuticals Technology
Revisions: 2 times (View History)
Update Date: 22 Apr 2022
Table of Contents
1000/1000
Hot Most Recent