+1 point
Thank you for your contribution! You can also upload a video entry related to this topic through the link below: https://encyclopedia.pub/user/video_add?id=21936
Check Note
2000/2000
Fungicides Elimination in Agriculture

Fungicides is a class of pesticides that target fungi that is commonly used in conventional farming. The benefits of pesticides are the consequences of their effects: increased productivity, protection of crop losses, vector disease control, and quality of food. Europe’s Farm to Fork strategy aims to boost the development of its organic farming area to 25% of total farmland by 2030. The environmental impacts of fungicides due to their production and application are analyzed, and expected benefits to human health and ecosystem quality due to their elimination are calculated here.

The most environmentally damaging form of human consumption is eating [1] because industrial agriculture results in environmental burdens due to the overuse of machinery, fertilizers, insecticides, herbicides, and fungicides [2]. The latter are toxic to humans and the environment [3]. This entry reviews the contribution to toxicity of fungicides in fruits, vegetables, cereals, and rapeseed production to show the benefits for human health and ecosystem quality after their elimination.
The primary goals of agriculture are the production of nutritional food for humans and feed for animals, and the increased economic development of stakeholders. In addition, the UN 2030 Agenda on Sustainable Development also identified bioeconomy as being in line with goals for energy efficiency (Goal 7) [4]. These goals resulted in a significant growth of the bioeconomy, and the number of publications about bioeconomy increased from 1000 in 2017 to approximately 3500 in 2021 [5]. Furthermore, during the period 2021 to 2030, global agricultural production is projected to increase by 1.4% per year [6]. Maize, rice, wheat, oilseeds, and oil products are major commodities globally [6]. Due to the introduction of synthetic pesticides between 1960 and 1989, pest control and agricultural output have significantly improved [7].
Intensive, industrial agricultural practices employ large quantities of inputs, such as fuels, electricity, water for irrigation, fertilizers, and pesticides. Such intensive agricultural practices are held responsible for increased energy use and accompanied elevated emissions of greenhouse gases [8], and adverse effects on human health and ecosystem quality [3]. In contrast, in organic agricultural practice, the use of fertilizers is significantly reduced while the consumption of pesticides is avoided [9].
The term pesticide covers a wide range of compounds, including insecticides, fungicides, herbicides, etc. The benefits of pesticides are the consequences of their effects: increased productivity, protection of crop losses, vector disease control, and quality of food [7]. These effects occur due to active ingredients in pesticides, which are chemicals that kill, control, or repel pests. The World Health Organization [10] and a study [11] focusing on toxicity stated that insecticides tend to be more toxic to humans than fungicides and herbicides by one and four orders of magnitude, respectively. However, three active fungicides ingredients—(1) tebuconazole, (2) epoxiconazole, and (3) prochloraz—were more toxic than herbicides and insecticides to mitochondrial activities, membrane degradations, and caspases 3/7 activities [12].
Fungicides are the class of pesticides that target fungi. Fungicides are classified as systemic and contact. Systemic fungicide can be defined as a fungicide that, when sprayed on top surfaces of the plant, is translocated to the plant tissues, transferring its toxicity to the targeted fungus [13]. Examples of systemic fungicides are Benomyl, Crypoconazol, and Imazalil. Contact fungicides remain on the plant surface after application and do not penetrate plant tissues. These fungicides are typically employed to control foliar diseases. A contact fungicide must be present on the plant surface before the disease penetrates the tissue [14]. Examples of contact fungicides are Mancozeb and Thiram. Pre-harvest fungicide use is greatly limited or absent in organic agroecosystems [15]. According to studies [16][17][18], approximately 55% of applied fungicide is found in air, freshwater, and soil while the rest remains in or on the crop, depending on fungicide class.
Stakeholders from corporate, academic, civil society, and governmental sectors highlighted a shift to organic agriculture as a sustainable solution to the negative effects of industrial agriculture [19]. In particular, European Union (EU) strategies regarding agricultural development encourage eco-friendly practices [20]. Europe’s Farm to Fork (F2F) strategy aims to boost the development of its organic farming area to 25% of total farmland by 2030. However, a recent study [21] concluded that increasing organic cultivation with the F2F strategy may result in less sustainable food systems because EU law strictly prohibits the use of genetically modified organisms in organic cultivation, which can result in failing to achieve hunger reduction (Sustainable Development Goal 2).

Active ingredients of fungicides contribute to various environmental impacts depending on their constituents and release in terms of mass, and release in terms of environmental medium. Figure 1, Figure 2 and Figure 3 show the extent to which active ingredients contribute to climate change, freshwater ecotoxicity, terrestrial ecotoxicity, human toxicity [3], (terrestrial) acidification [22], and freshwater eutrophication [23]. Among these environmental impacts, only climate change is not affected during fungicide application but derives from the production their stage due to greenhouse gases emissions. The other impacts occur during fungicides application in the cultivation stage. 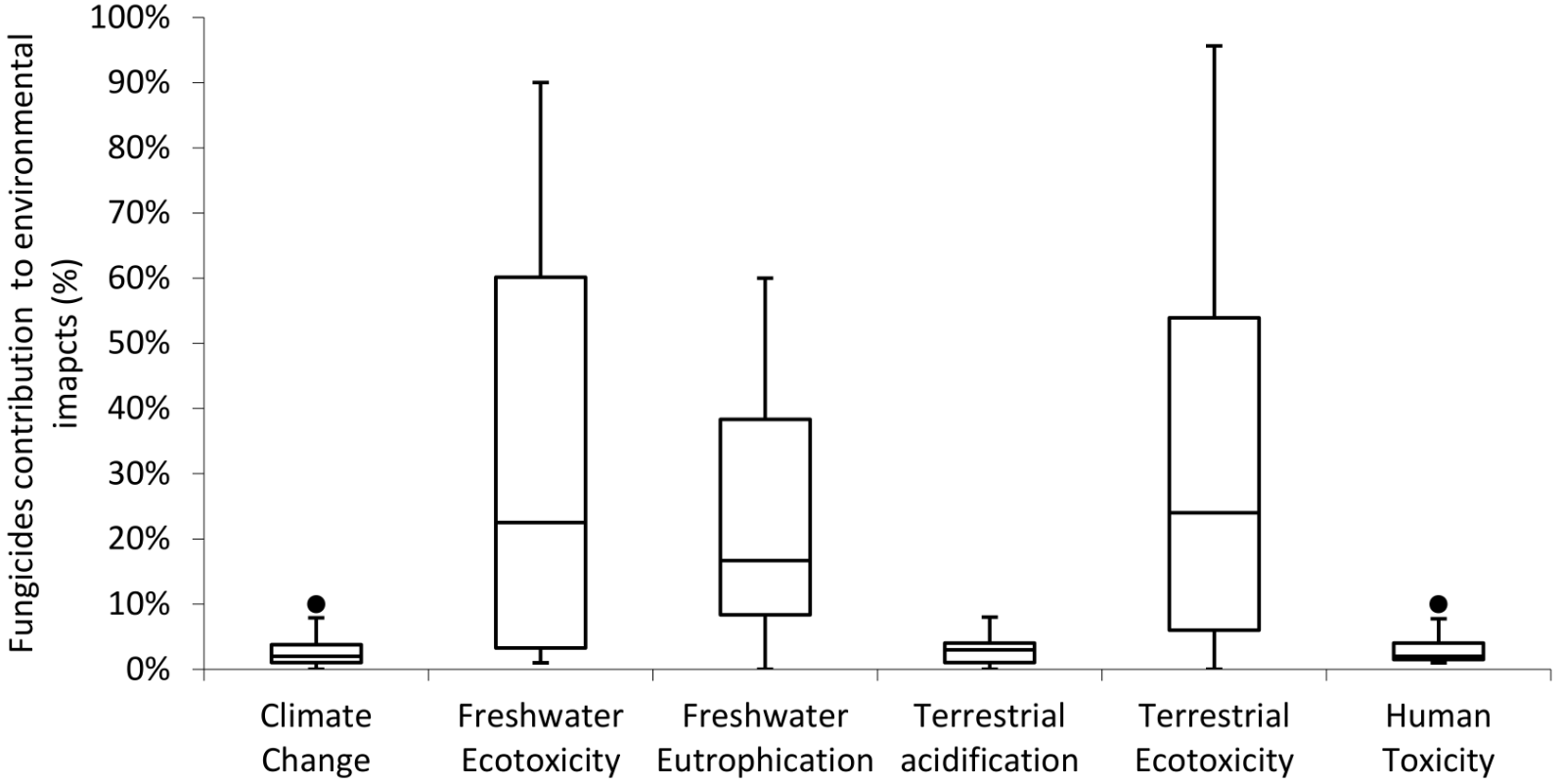 Figure 1. Box plot with median and outliers of fungicides contribution to environmental impacts of 1 kg of fruits. 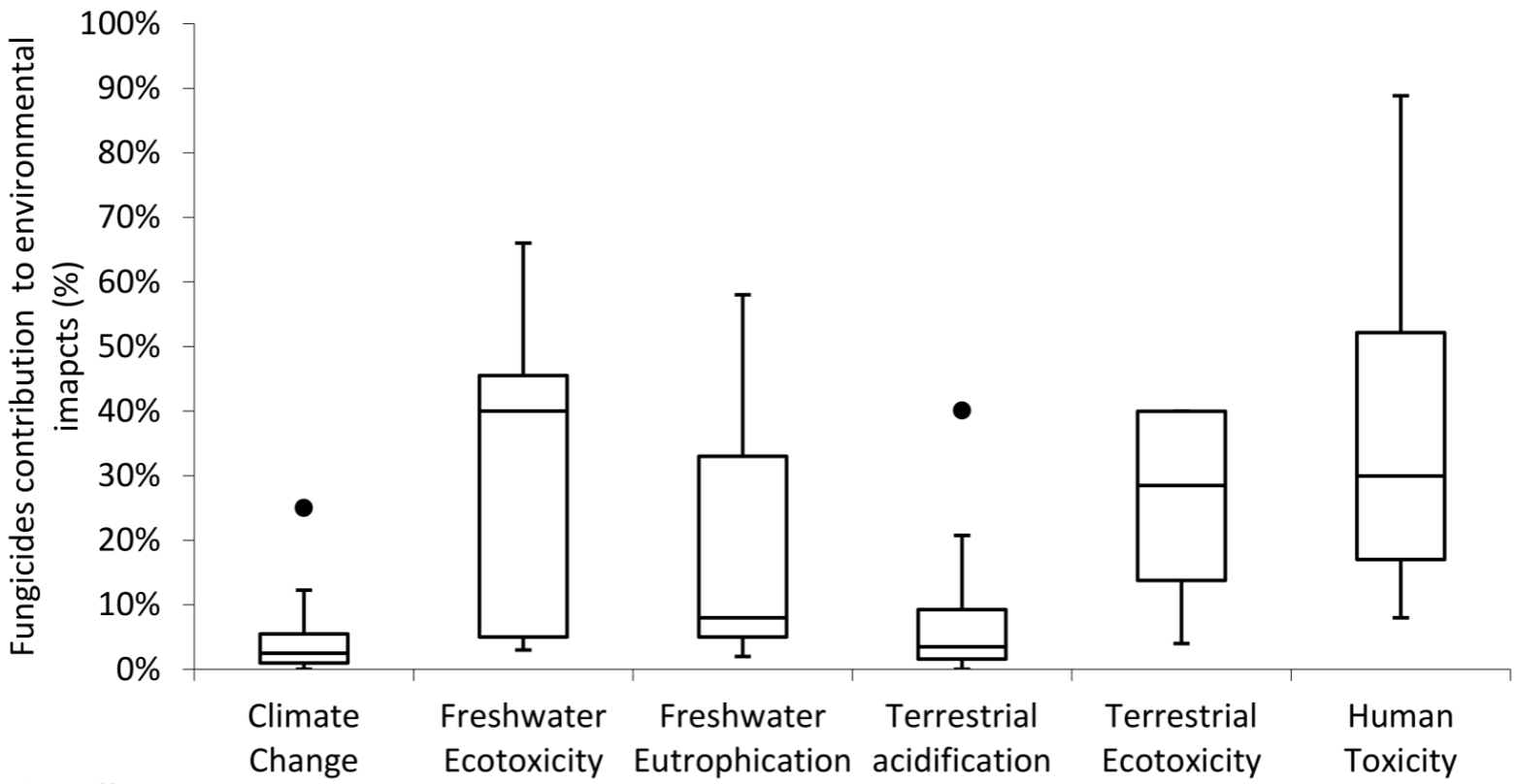 Figure 2. Box plot with median and outliers of fungicides contribution to environmental impacts of 1 kg of vegetables.

Figure 3. Box plot with median and outliers of fungicides contribution to environmental impacts of 1 kg of cereals and seeds.

3. Endpoint Impacts Due to Fungicides Application

In 2019, approximately 42,000, 55,430, and 255,870 ktonnes of fruits, vegetables [24], and cereals [25], respectively, were produced in Europe with conventional farming [26][27]. It should be mentioned that non-edible parts of these agricultural products and rapeseed can be used for the production of biofuels [28][29] depending on the availability of money and consumers’ habits [30]. Table 1 and Table 2 show minimum and maximum benefits in human health per person and ecosystems quality (terrestrial), respectively, if fungicides are eliminated in fruits, vegetables, and cereals and rapeseed production in Europe. Outliers of climate change (in Figure 1 and Figure 2) were not considered in endpoint calculations based on Grubbs’ test. These outliers were derived from studies that grouped fungicides emissions with farm emissions.
Table 1. Human health and ecosystem quality (terrestrial) based on low contribution of fungicides to climate change, human toxicity, terrestrial ecotoxicity, and terrestrial acidification.
Table 2. Human health and ecosystem quality (terrestrial) based on high contribution of fungicides to climate change, human toxicity, terrestrial ecotoxicity, and terrestrial acidification.
Potential benefits for human health are greater in fruits than vegetables, cereals, and rapeseed. In addition, the fact that midpoint to endpoint conversion factors ranges minimally between individualist and hierarchist perspectives results in similar values for both perspectives for both low and high fungicides contributions to climate change and human toxicity. In contrast, concerning the egalitarian perspective, the climate change midpoint to endpoint conversion factor increases by at least one order of magnitude compared to the individualist perspective and results in adverse effects for all crops (Table 2). This increase in climate change conversion factor results in vegetables damaging human health more than cereals and rapeseed with the egalitarian perspective. Human toxicity is the midpoint indicator that influences human health results for all perspectives. Climate change insignificantly affects human health from individualist and hierarchist perspectives but increases its effect with the egalitarian perspective due to the increase in midpoint to endpoint contribution. Lastly, the production of cereals is an order of magnitude higher than fruits and vegetables, but the very low contribution of fungicides in human toxicity of cereals and rapeseed does not result in higher toxicity per person than fruits.
The elimination of fungicides in cereals and rapeseed results in greater potential benefits in ecosystem quality (terrestrial) than vegetables and fruits for individualist and hierarchist perspectives. This occurs mainly due to production yields of cereals and rapeseed and larger terrestrial acidification score of cereals and rapeseed than other crops, especially with respect to the lowest amount of expected ecosystem benefits (Table 1). In contrast, terrestrial ecotoxicity is the largest contributor to benefits in ecosystem quality for the cases of fruits and vegetables based on the individualist and hierarchist perspectives. The individualist and hierarchist perspectives result in a greater difference in benefits among considered crops, but similar benefits are found with the egalitarian perspective. The egalitarian perspective results in more species loss due to the increase in midpoint to endpoint conversion factor for climate change and production yields for all crops.

More
© Text is available under the terms and conditions of the Creative Commons Attribution (CC BY) license; additional terms may apply. By using this site, you agree to the Terms and Conditions and Privacy Policy.
Upload a video for this entry
Information
Subjects: Environmental Sciences
Contributor MDPI registered users' name will be linked to their SciProfiles pages. To register with us, please refer to https://encyclopedia.pub/register :
Georgios Archimidis Tsalidis
View Times: 167
Entry Collection: Environmental Sciences
Revisions: 2 times (View History)
Update Date: 20 Apr 2022
Table of Contents
1000/1000
Hot Most Recent