+1 point
Thank you for your contribution! You can also upload a video entry related to this topic through the link below: https://encyclopedia.pub/user/video_add?id=21893
Check Note
2000/2000
Microencapsulation of Natural Food Antimicrobials

Encapsulation is defined as the process in which an active substance (core material) is enveloped into another substance (shell/matrix/wall material) to elaborate particles with a specific geometry at the nanometer (nanoencapsulation), micrometer (microencapsulation) or millimeter scale. Some natural food antimicrobials with strong antimicrobial activity and low toxicity have been considered as alternatives for current commercial food preservatives. Nonetheless, these natural food antimicrobials are hardly applied directly to food products due to issues such as food flavor or bioavailability. Recent advances in microencapsulation technology have the potential to provide stable systems for these natural antibacterials, which can then be used directly in food matrices.

Food safety is the most important issue for both consumers and the food industry since it is expected to prevent, reduce or eliminate risks at diverse levels of the food chain and in the meantime allows us to sustain, provide and distribute high-quality food to meet consumer demands. Chemical additives have been extensively used to prevent food spoilage by pathogenic bacteria, but their safety and impact on human health are under discussion owning to undesirable aspects such as carcinogenicity, toxicity and teratogenicity. Therefore, there is an ongoing demand for safe, minimally processed, easily prepared and ready-to-eat fresh foods and high-quality products free of synthetic chemical preservatives [1]. The current important trends in using natural antimicrobial compounds from plants (essential oils (EO), herbs, spices…), animals (lysozyme, chitosan…) and microorganisms (nisin, pediocin, enterocin…) in foods are attributed to the preservation of a wide spectrum of antioxidant and antimicrobial activities, reducing the development of antibiotic resistance by pathogenic microorganisms and extending the quality and shelf-life of perishable food products besides their biodegradability, availability and low toxicity [2].
The direct addition of natural compounds to food products is the most common method of application, even if numerous efforts have been made to find alternative solutions with the aim of avoiding undesirable inactivation [3]. Moreover, the direct addition of some bioactive agents can contribute to changes in the flavor, odor and texture of foods and the bioavailability of these compounds might be reduced by the possible interactions with the food ingredients. Consequently, stabilization of these compounds before addition to food products is of great importance in order to obtain products with a prolonged shelf-life without noticeable alterations in their sensory properties, which can be achieved by applying the encapsulation process [4].
Encapsulation is defined as the process in which an active substance (core material) is enveloped into another substance (shell/matrix/wall material) to elaborate particles with a specific geometry at the nanometer (nanoencapsulation), micrometer (microencapsulation) or millimeter scale [4]. The classification of the structure of microcapsules includes the monocore shell, the multicore shell and the matrix type in which the core material is dispersed like small droplets inside the shell material [5]. Natural or synthetic polymers, which form the shell (outer part) of microcapsules, act as a barrier to protect the microparticle core from losing its nutritional value and/or activity and decreasing the undesired interactions with the environment [6]. Internal structure and morphology are the two major parameters for classifying microparticles into microspheres and microcapsules, but often the terms are used synonymously. Microcapsules and microspheres are distinguished by reservoir systems and matrix systems, respectively [7] (Figure 1). Recently, the controlled release of encapsulated bioactive molecules under specific conditions has been well-documented in the literature [8][9][10]. However, there are still uncertainties about the selection of appropriate encapsulation techniques and the application of these encapsulated antimicrobials in various foods, which need further exploration. Thus, gaining knowledge about the properties of encapsulated active agents, encapsulation materials used for the formation of microcapsules (shell/matrix/wall material) and suitability of the formed delivery systems for useful applications turns into an important issue. 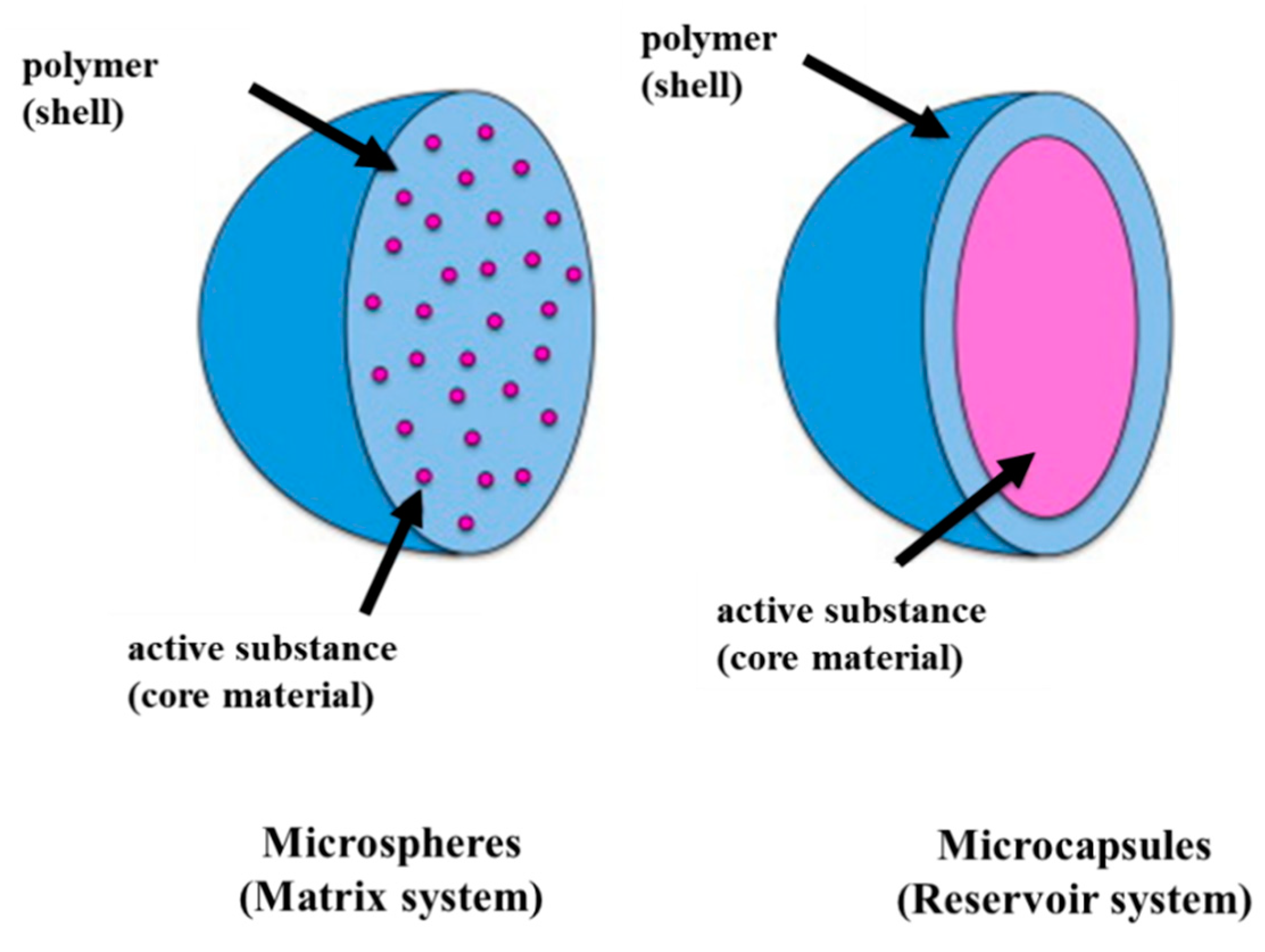 Applying GRAS natural antimicrobials in a food matrix can lead to healthier and safe products for consumers [36], but the range of antibacterial activity of these compounds against different microorganisms as well as their compatibility and interactions with produced microcapsules and ability of microcapsules to protect entrapped agents and release core material at the desired rate should be evaluated. Antimicrobial activity of different agents can be increased or decreased via microencapsulation, unlike free agents, which depend on the composition of the antimicrobial agent and encapsulation method used.

Propolis, or bee glue, is an adhesive and resinous material collected by honey bees (Apis mellifera L.) from various parts of plants and buds and leaves of trees. The main property of propolis is its inhibitory activity against microorganisms in addition to many other biological activities, such as antioxidant, anti-inflammatory, anesthetic, anticarcinogenic and anticariogenic properties [47][48][49]. Owing to its great properties, propolis, as a natural additive, can be safely used in food and pharmaceutical industries despite of some disadvantages, such as its unpleasant taste, off-odor and alcohol solubility [50], which could be overcome by microencapsulation [23][31][51][52].
The biological activities of propolis are attributed to the presence of several bioactive compounds, such as phenolic compounds, terpenoids, steroids, amino acids and vitamins [48]. Propolis extract (PE) displays antimicrobial activity against both Gram-positive and Gram-negative bacteria, indicating its possible use as a natural food preservative [39][41]. Several research studies have demonstrated that Gram-positive bacteria are more sensitive to PE than Gram-negative ones due to differences in bacterial cell structure [53][54]. In fact, the high permeability of Gram-positive bacteria cells is related to the presence of 90–95% peptidoglycan in cell walls, thus allowing the penetration of antimicrobial agents into the cell, whereas lipopolysaccharides (LPS) from the outer membrane of Gram-negative bacteria create resistance toward natural antimicrobial active compounds [39]. Spray-dried microparticles of PE (2.5 and 5.0% w/v) with pea protein as a carrier (2.0% w/v) have shown bacteriostatic and even bactericidal effects against the Gram-positive bacteria Listeria monocytogenes and S. aureus. Unlike PE, these propolis microparticles did not show any activity against either Gram-negative bacteria S. Typhimurium or E. coli [39]. The antimicrobial activity of pure PE was shown to be higher than that of encapsulated PE, which could be due to the lower PE concentration in the microparticles [23][39][41]. The inhibitory activity of microencapsulated propolis in soy protein isolate–pectin coacervates with encapsulant agents and core concentrations between 2.5 and 5.0 g/100 mL against S. aureus was about 200–400 µg/mL, and for the free one, this ranged between 50 and 100 µg/mL [23]. Thus, higher concentrations of propolis should be encapsulated to obtain antibacterial activity comparable to that of the free antimicrobial.
The overall antimicrobial activity of encapsulated propolis is influenced by several factors, such as the type and concentration of the wall material used for encapsulation, the amount of PE substances within the dry particles and the presence of various biological compounds in the pure PE. However, no detectable growth of S. aureus was found for either free propolis or spray-dried propolis–gelatin microcapsules, confirming that spray drying was effective at preserving the properties of the active agent [51].

Generally, antimicrobial peptides (AMP) are composed of 20–50 amino acids possessing a broad spectrum of antimicrobial activity and can be found in a wide variety of life forms, from microorganisms to humans. The net positive charge and the amphipathicity are considered as the main properties of AMPs [55]. The AMP has the ability to kill microbial pathogens through membrane permeabilization and disruption of biological activity of pivotal cytoplasmic substances including proteins, enzymes and RNA and DNA [56]. Antimicrobial peptides from bacteria can be produced ribosomally or nonribosomally. Ribosomally biosynthesized peptides are known as bacteriocins, of which only a few have been used in the food industry because of their high salt sensitivity and proteolysis [57]. Among the studied bacteriocins, such as pediocin, subtilin, lacticin, sakacin, leucocin, enterocin, mutacin and mesenterocin [58], nisin has been the only bacteriocin recognized as GRAS by the FDA since 1980. Nisin is a 3.4 kDa antimicrobial peptide consisting of 34 amin acids with unsaturated amino acids and lanthionin residues. Nisin A differs from nisin Z by a single amino acid substituting histidine at position 27 in nisin A and asparagine in nisin Z. Additionally, other nisin variants have been identified, such as Q, F and U (Ko et al., 2015). It is produced by certain strains of Lactococcus lactis sp. lactis and has antimicrobial activity against a wide range of Gram-positive bacteria, including foodborne pathogens such as L. monocytogenes [59]. This metabolite can also inhibit bacterial growth of heat resistant and/or spore-forming microorganisms, particularly those belonging to the Listeria, Bacillus and Clostrodium species found in dairy products and canned foods [57][60]. However, the antimicrobial activity of free nisin added into food products can be reduced over time as a result of establishing complex interactions with food ingredients such as fats and proteins in addition to the possible proteolytic degradation [61]. Additionally, the emergence of bacteriocin-resistant bacteria might occur through direct incorporation of nisin in food systems [62]. Microencapsulation is an appropriate alternative able to overcome limitations of direct bacteriocin application in foods and achieve a sustained release of antimicrobial peptides in delivery systems [35][63].
The slow release of antimicrobial agents such as beacteriocins from microcapsules can improve their antimicrobial activity by reducing the contact time of agents with some food components, resulting in partial inactivation. The antimicrobial activity of alginate microcapsules containing nisin formed by vibrating technology was evaluated against Brochothrix thermosphacta 7R1. The residual activity of encapsulated nisin in active microcapsule units per mL (AMU/mL) was measured under various conditions (4 and 20 °C, pH 2.5, 4.5 and 6.0) over 168 h. The best result was achieved for the active microcapsules under storage conditions of 4 °C and pH 6.0. The efflux of nisin from microcapsules at higher temperatures and higher pH can lead to the reduction in AMU/mL. The microencapsulation of nisin had a significant effect on total inactivation of 104 and 106 CFU/mL resting cells of Brochothrix thermosphacta 7R1 [35]. The antimicrobial activity of nisin encapsulated in liposomes was assessed against L. monocytogenes and E. coli O157:H7. The inhibitory effect of PC and PC/PG 6/4 (mol%) liposomes containing 5.0 or 10.0 µg/mL nisin (with or without EDTA) were almost equal to free nisin plus EDTA against L. monocytogenes. The highest growth inhibition against E. coli was obtained for liposome-coencapsulated nisin and EDTA. A consistent release of nisin and EDTA within 48 h was obtained for liposomes with PC/PG 6/4 formulation and other liposomes with a low amount of PC or PG released active agents more slowly [63]. Structural changes in nisin through β-turns’ formation occurring as a result of interactions between nisin and phospholipid membranes can contribute to increasing the stability and antimicrobial activity against bacteria. Additionally, cholesterol can have a stabilizing effect on liposome composition by reducing membrane permeability and improving cohesive interactions. Addition of cholesterol to liposome composition can contribute to its orientation within the fatty acyl chains of phospholipid molecules, while its hydroxyl group faces toward water interface, thus promoting in vitro and in vivo stability of liposomes [64].

More
© Text is available under the terms and conditions of the Creative Commons Attribution (CC BY) license; additional terms may apply. By using this site, you agree to the Terms and Conditions and Privacy Policy.
Upload a video for this entry
Information
Subjects: Food Science & Technology
Contributors MDPI registered users' name will be linked to their SciProfiles pages. To register with us, please refer to https://encyclopedia.pub/register :
Adem Gharsallaoui
,
Wei LIAO
,
Emilie Dumas
View Times: 284
Revisions: 2 times (View History)
Update Date: 19 Apr 2022
Table of Contents
1000/1000
Hot Most Recent