Submitted Successfully!
Thank you for your contribution! You can also upload a video entry related to this topic through the link below:
https://encyclopedia.pub/user/video_add?id=2185
Check Note
2000/2000
Milk Fat Globule Membrane (MFGM)
Edit

Milk fat globule membrane (MFGM) is an important component of milk lipids that showed several biological properties (such as anticarcinogenic, antimicrobial, anti-inflammatory, and anticholesterolemic activities). In this review we analyse the latest results obtained from comparative proteomic studies regarding the variations and the similarities of MFGM proteome across species and lactation stages. Infant formula supplementation with MFGM represents an interesting opportunity to implement the bioactive properties exerted by MFGM, in order to narrow the gap between human breast milk and infant formula.

Bovine milk is an oil-in-water emulsion and is rich in nutrients and bioactive factors [1]. Milk fat occurs as milk fat globules (MFGs), composed of a nonpolar triglyceride (TG) core and covered in a layer of surface-active material, called milk fat globule membrane (MFGM) [2][3][4][5]. It is made up of many different compounds: polar lipids such as phospholipids, sphingolipids and glycolipids, and also cholesterol, proteins, and surface glycoproteins [6]. This membrane acts as a natural emulsifier and encases the nonpolar triglyceride core of MFGs [7][8]. There are several health-promoting e ects of the MFGM (mainly from bovine but also from other species), such as anticarcinogenic, antimicrobial, anti-inflammatory, and anticholesterolemic activities [5][9]. The aim of this review is to provide a general overview about the formation of bovine MFGs and MFGM and to highlight the main similarities and di erences across the MFGM proteomes of the most-studied species (human, cow, goat, buffalo, etc.) through the analysis of comparative proteomic studies. Moreover, the potential supplementation of MFGM fractions in infant formula (IF) is investigated in order to underline the beneficial e ects exerted by MFGM bioactive components in infant feeding. 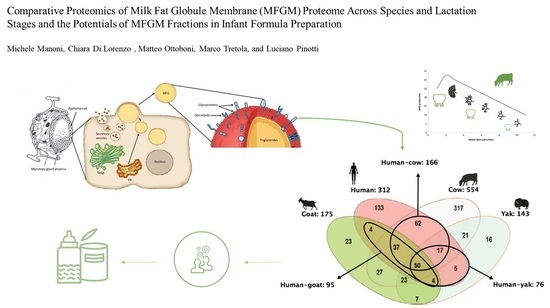 2. Lipids in MFG and MFGM 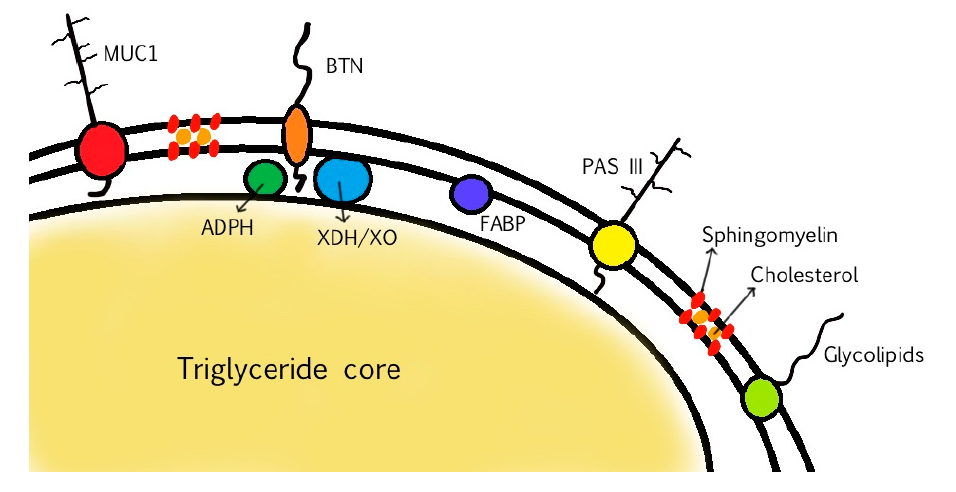 In the following table, the major components of bovine MFGM and their main functions are listed. 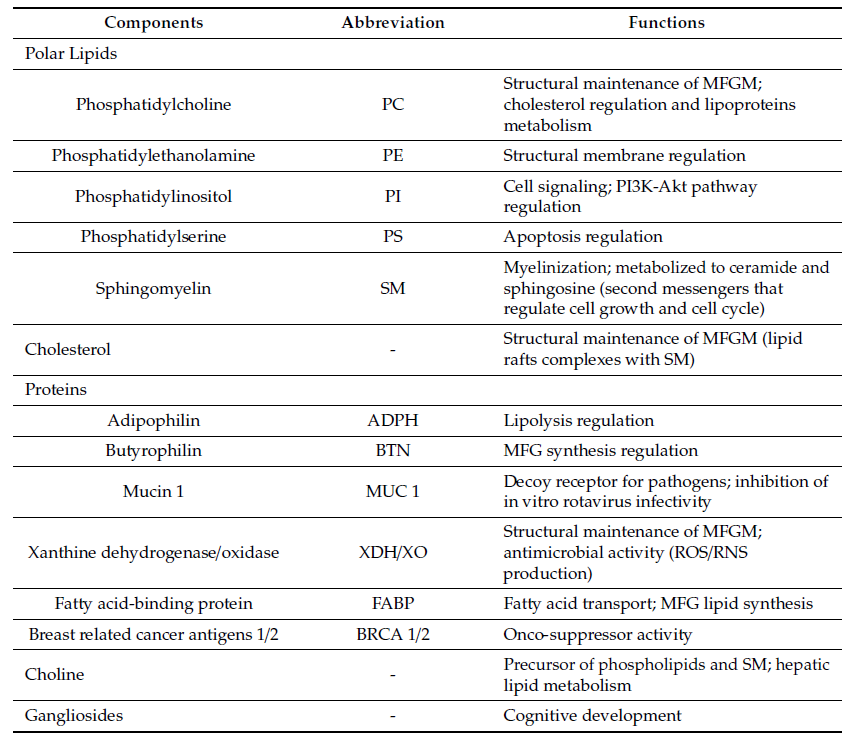 Although most of the beneficial effects of MFGM are associated with its polar lipid fraction [5], studies on MFGM proteome are increasing since MFGM proteins show bioactive properties and new technologies have enabled more detailed analyses of the MFGM proteome. Comparative proteomic analyses have been performed to understand how proteomes vary between different species and between different stages of lactation [13]. To summarize, the principal MFGM proteins have been identified in all species. However, the main molecular functions exerted by MFGM proteomes vary according to species and lactation stage due to the variations in protein expression. For example, the human MFGM proteome (in particular that contained in colostrum) has more immune response-related proteins than the MFGM proteome from other species. There are similarities between human and cow MFGM proteome and molecular functions, suggesting that bovine milk, and more specifically bovine MFGM proteins, could be used as a supplement in infant formulas (IFs) [14][15].

Breast milk is considered the gold standard for infant nutrition and is required for optimal infant growth, brain and GI tract development, as well as establishing the immune system. Some of the bioactive factors of breast milk are present in the MFGM. In order to develop products that reflect the complexity of human milk, efforts have been made to imitate the nutritional profile and composition of human breast milk. IF has been designed in order to be a suitable alternative to human breast milk [14][15][16][17]. Bovine milk is currently the basis for most IFs. In addition to nutrients, human breast milk also contains several bioactive compounds (Igs, enzymes, hormones) and live cells (e.g., leucocytes) that cannot be easily added to IFs [17][18]. All these elements prevent IFs from having the same composition as human breast milk, although the research in this field has advanced considerably. In fact, several studies [12][14][19][20][21] have suggested that supplementing IFs with MFGM could provide beneficial e ects because of the presence of bioactive compounds such as proteins and polar lipids in the MFGM, thus narrowing the gap between human breast milk and IFs. Many of these results were obtained through the supplementation of IF with the polar lipid fraction of the MFGM (phospholipids and sphingolipids), given that these compounds are the main contributors to the nutraceutical effects of the MFGM [5]. Few studies have investigated supplementing IF with MFGM proteins [15]. Timby and collaborators [14] evaluated the effect of a low-energy and low-protein formula supplemented with a protein-rich bovine MFGM fraction on healthy infants. Their results showed that the cognitive score (assessed with Bayley-III tests) was 4.0 points higher in the experimental formula group than in the standard formula group (105.8 vs. 101.8; p < 0.05), but was similar to the breastfed group (105.8 vs. 106.4; p > 0.05). This suggested that the experimental formula could decrease the gap in cognitive performance between breastfed and formula-fed infants [14].

Milk has important nutritional features for newborns. Indeed, breast milk is a mixture of several bioactive compounds that modulate the GI tract and contribute to building the immune system of breast-fed infants. The growing interest in MFGM led researchers to study the MFGM proteins from a wider approach through proteomics. There are variations in terms of protein expression level and molecular function across species, even though the major MFGM proteins are observed among all the species considered. The properties of the MFGM proteome of each species could be exploited to design products supplemented with MFGM fractions that meet specific needs, for example, the enhancement of the immune system, the regulation of cholesterol metabolism, or the supply of beneficial polar lipids to support cognitive function. The promising results obtained with the supplementation of IF with MFGM proteins [14][22] and polar lipids [21] underline once again the importance of MFGM in IF preparation—since cow milk-based IF is formulated to better resemble human breast milk, the MFGM supplementation could increase the presence of bioactive compounds in IF (usually at low levels in standard formula). Future work is likely to be addressed towards a deeper comprehension of MFGM proteome and its variations across species and lactation stages. The overall aim is to further increase the knowledge of MFGM properties and to assess the potential of the supplementation of IFs with MFGM proteins.