The mucosal advancement flap is mainly preferred for the treatment of mid-level AS. Good functional outcomes have been reported by a couple of studies that include different samples sizes [1][2]. Rakhmanine et al. reported outcomes of 95 patients in a retrospective study, and the overall complication rate was found to be 3% [3].
Technical notes of Mucosal advancement flap:
The technique starts with the excision of the scar tissue; then, a transverse incision is made proximally to the dentate line. The rectal mucosa is dissected to the level of submucosa and advanced to the anal canal to cover the excised stricture area. The exterior wound is preferred to be left open to minimize the ectropion formation [4]. 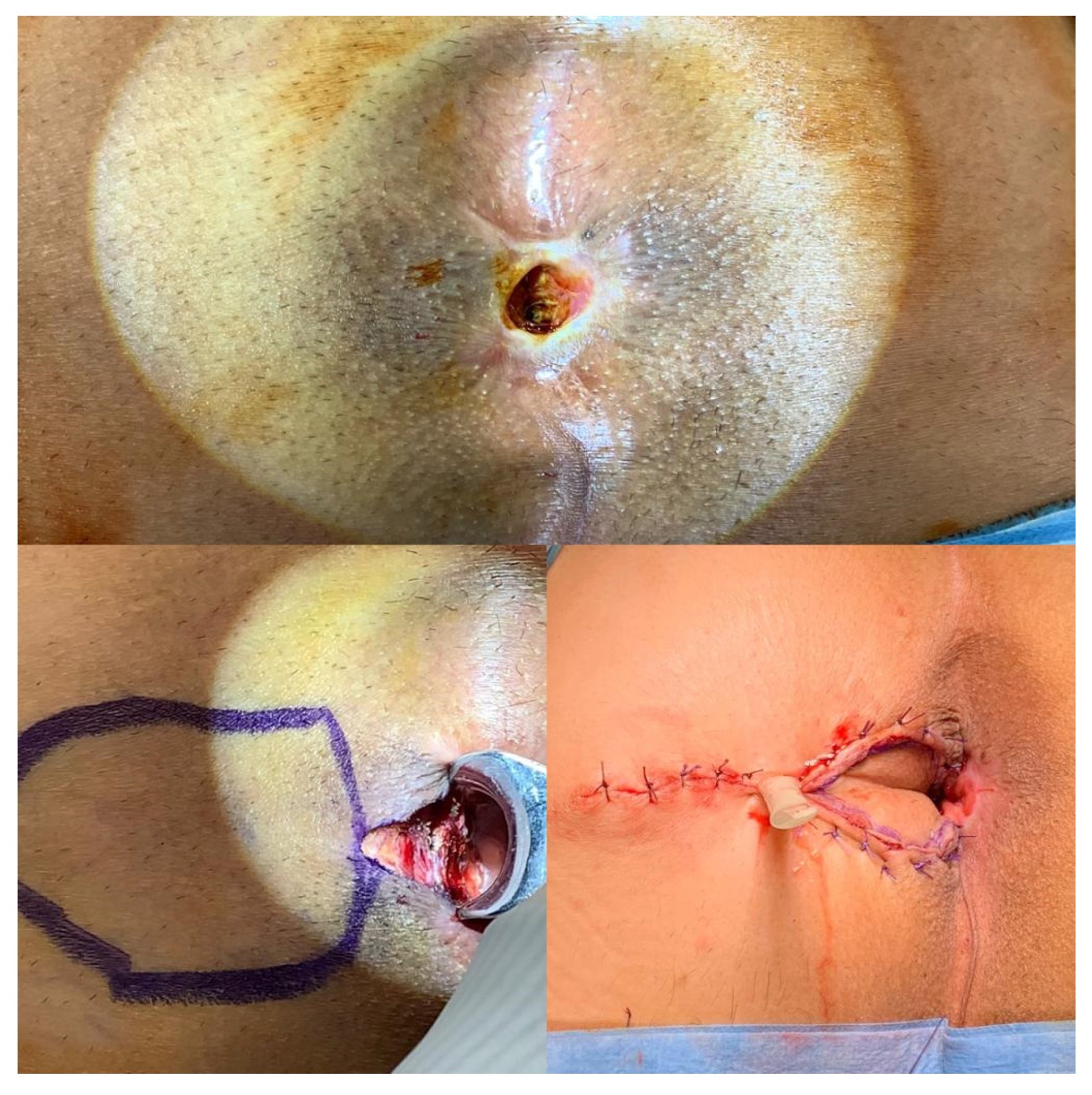 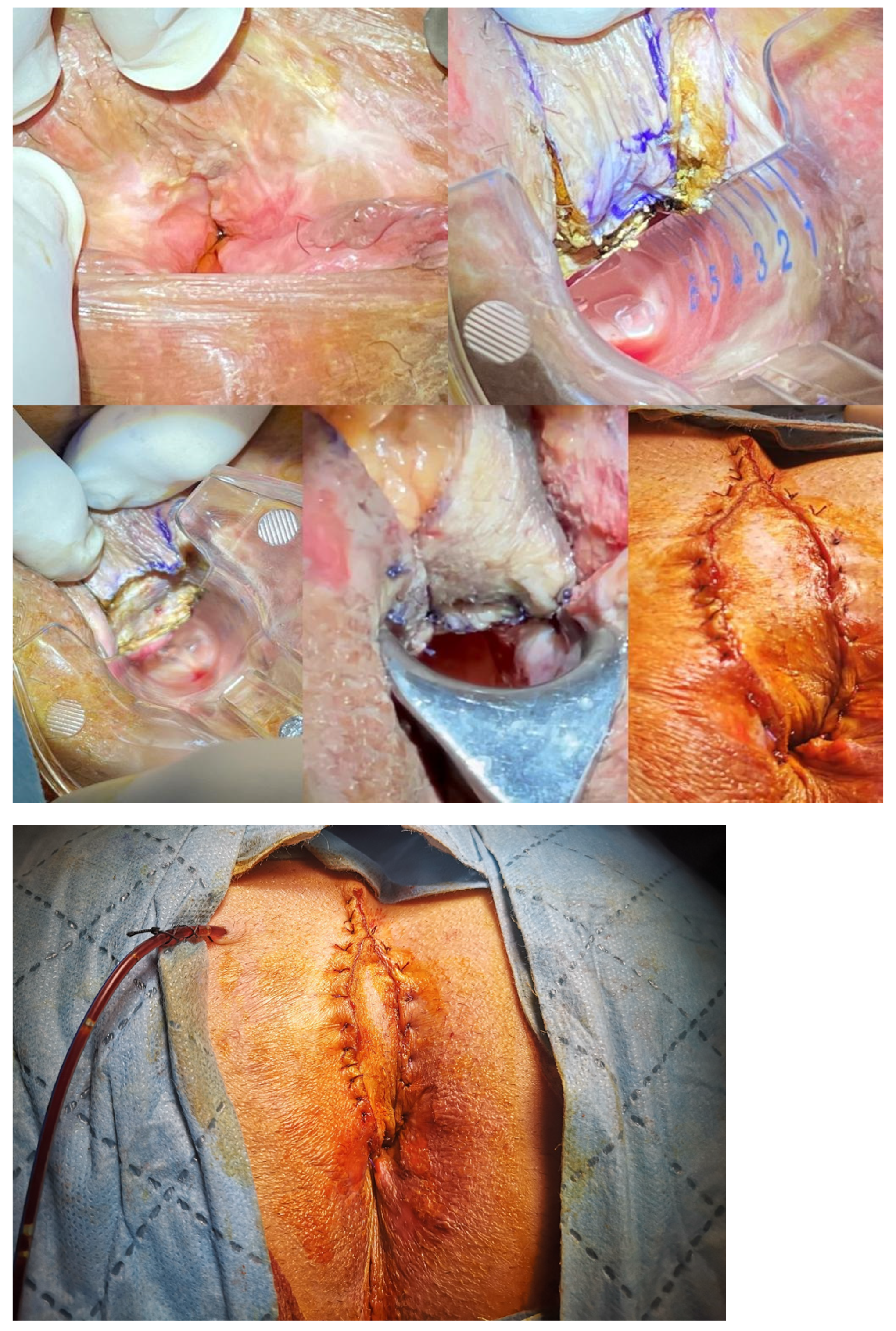 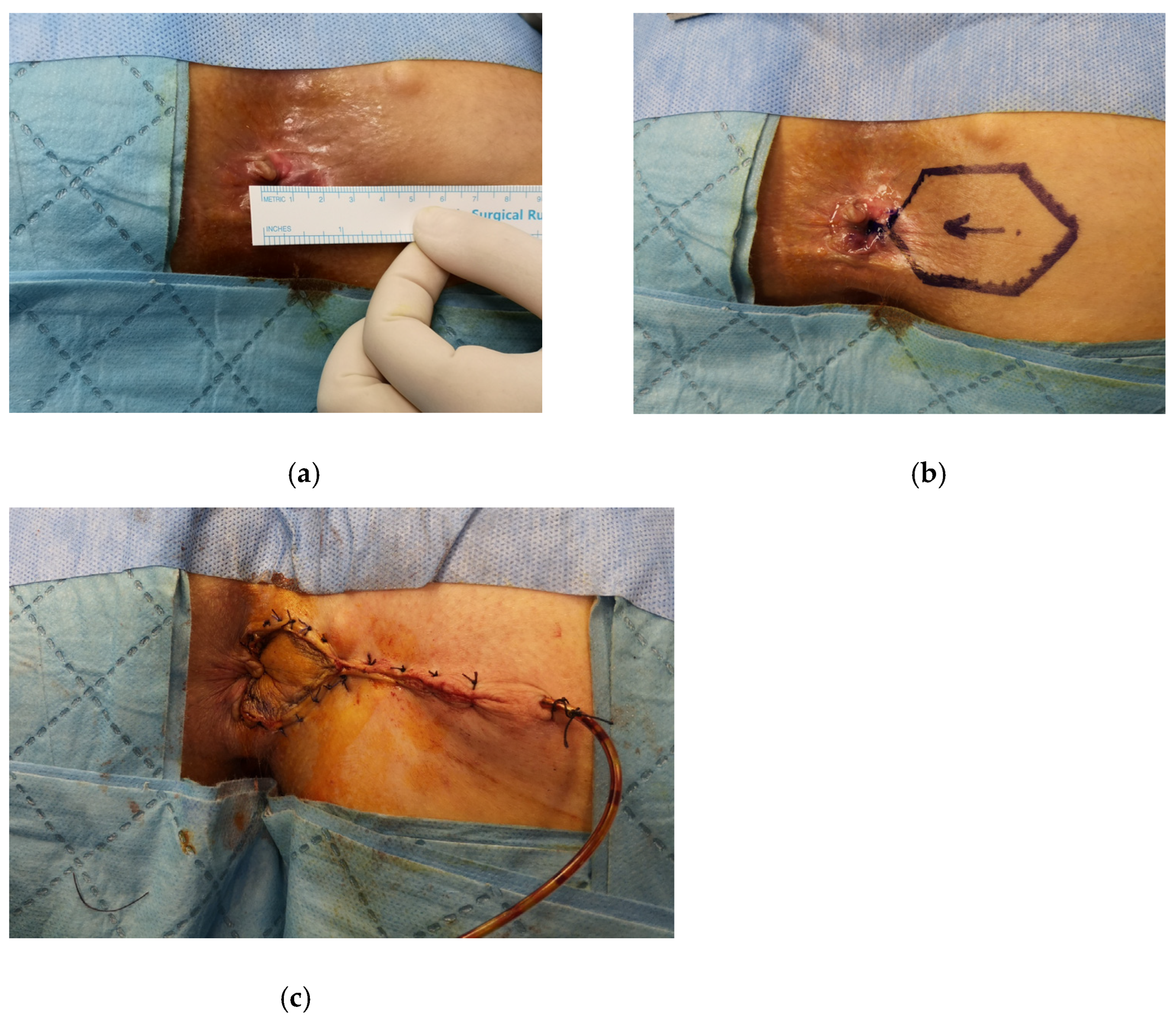 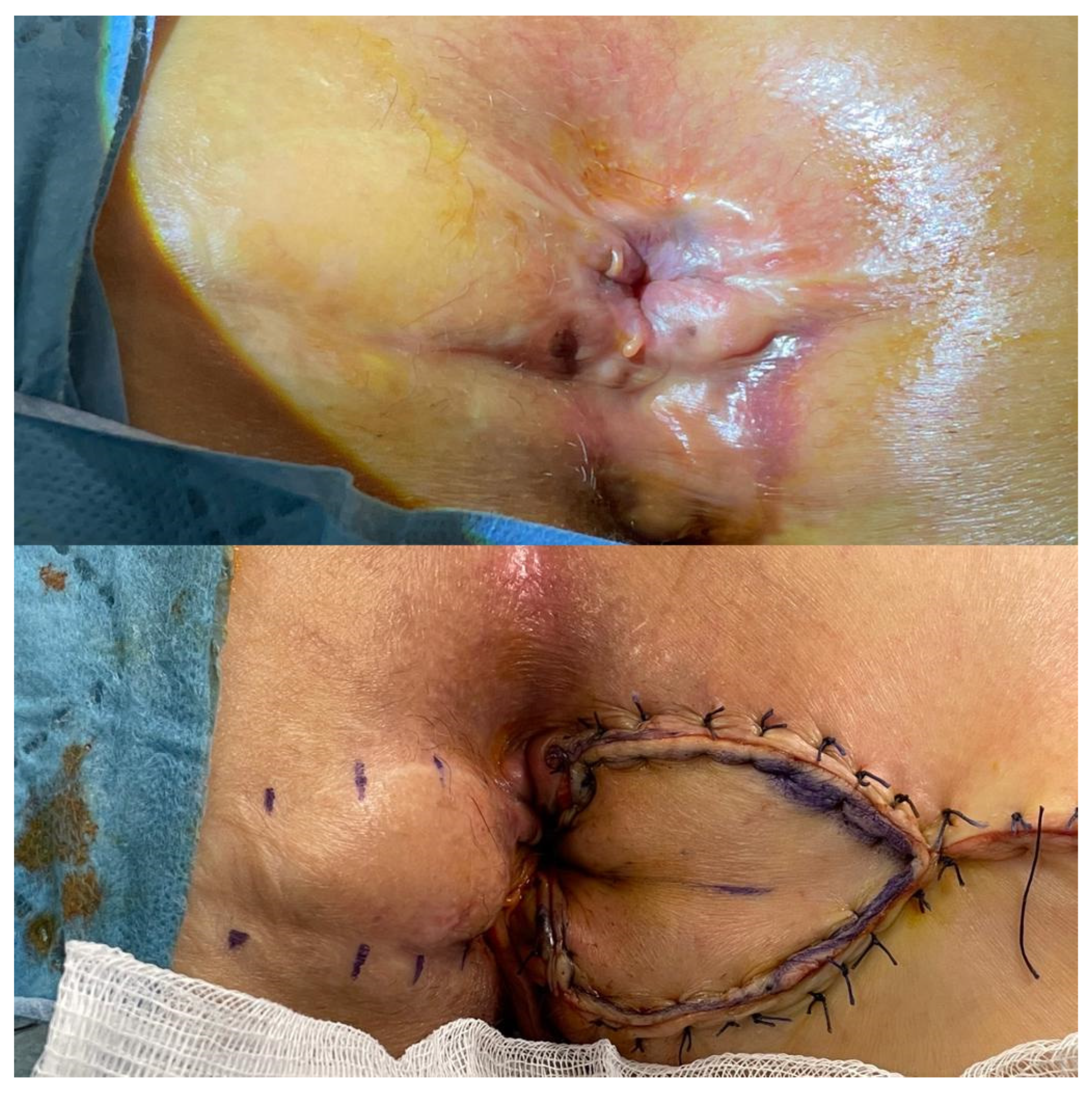 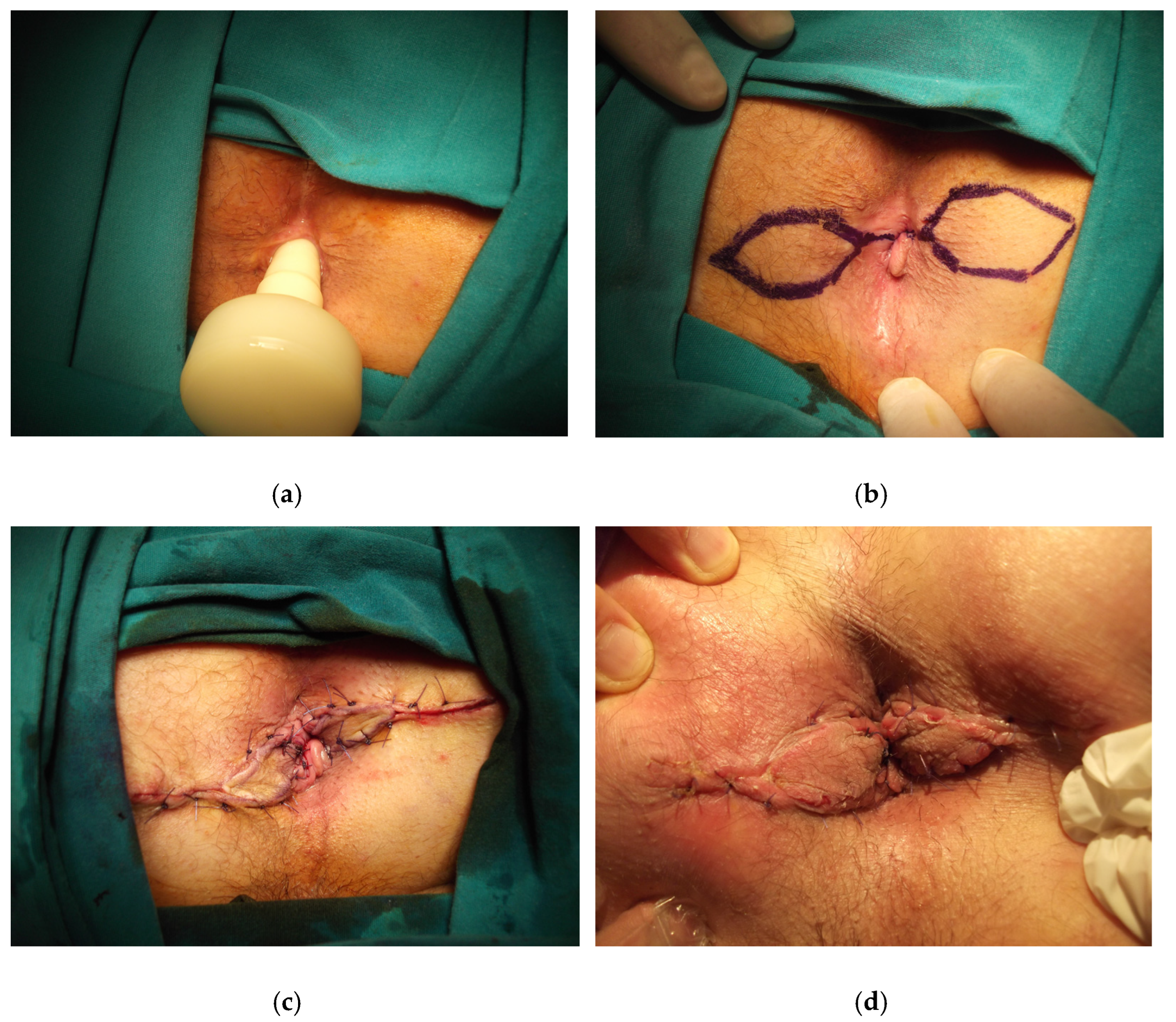 The Y-V advancement flap is performed for low and localized strictures below the dentate line, whereas the V-Y flap is used for mild to severe stricture at the dentate line [4]. Maria et al. reported 29 patients who had Y-V anoplasty in a comparative study with diamond flap, with a healing rate of 90% and an ischemic contracture of the leading edge of the flap and wound dehiscence in two patients [11]. The authors suggested that the diamond flap is a more reliable technique due to the reduced tension in the suture line and the better blood supply of the flap. Farid et al. observed less clinical improvement (65%) and higher ischemic wound complications (15%) with this technique [7].
Technical notes of Y-V flap/V-Y flap:
Initially, the vertical limb of the Y is performed to the area of stricture. The incision is extended to the perianal skin in two directions creating a V shape. Then, the tip of the V is advanced to the vertical limb of the Y incision. It can also be done in either a lateral position or just in the posterior midline. The main disadvantage regarding this technique is the tip of the V flap being prone to ischemic necrosis [12].
For the V-Y advancement flap, the first few steps are the same as the Y-V flap, but in this procedure, the wider base of the triangular Y flap is sutured to the dentate line. Then the perianal skin is approximated with sutures longitudinally behind the V shape to form the Y shape [4].

Rotational S-plasty was first described by Ferguson in 1959 for the repair of the whitehead deformity of the anus [16]. Corman et al. in 1976 adapted this technique for the treatment of AS [17]. This technique enables covering large areas of skin with an adequate blood supply. Gonzalez et al. revealed that 94% of patients had good results during a mean follow-up of 18 months [18].
Technical notes of Rotational S-plasty:
The technique starts with outlining the semicircular incision in the perianal skin, with a length of 12 to 13 cm. The base of the incision should not be shorter than its length. Then skin incision is done to the layer of subcutaneous fat lobules to preserve the blood supply of the skin flaps. The flap is then rotated and fixed to the mucosa by interrupted sutures [19].
© Text is available under the terms and conditions of the Creative Commons Attribution (CC BY) license; additional terms may apply. By using this site, you agree to the Terms and Conditions and Privacy Policy.
Upload a video for this entry
Information
Subjects: Surgery
Contributors MDPI registered users' name will be linked to their SciProfiles pages. To register with us, please refer to https://encyclopedia.pub/register :
Bengi Balci
,
Sezai Leventoǧlu
View Times: 359
Entry Collection: Gastrointestinal Disease
Revisions: 2 times (View History)
Update Time: 18 Apr 2022
Table of Contents
1000/1000
Hot Most Recent