+1 point
Thank you for your contribution! You can also upload a video entry related to this topic through the link below: https://encyclopedia.pub/user/video_add?id=21667
Check Note
2000/2000
Universal Model of Cancer Transformation and Development

As a phenomenon, cancer is a disease related to multicellular evolution, i.e., cancer in general is understood to be a failure of the multicellular systems and is considered a reversal to unicellularity. Cancer cells are like unicellular organisms that benefit from ancestral-like traits. As a disease, cancer can be interpreted as (a) a destruction of cooperative behaviors underlying multicellular evolution, (b) a disruption of molecular networks established during the emergence of multicellularity or (c) an atavistic state resulting from reactivation of primitive programs typical of the earliest unicellular species. From this point of view and in accordance with the layered model of evolution of cellular functionalities, cancer transformation can occur as a result of huge disturbances or the destruction of functionalities that are located in the multicellular layer.

The war on cancer was announced in 1971 by then President of the USA, Richard Nixon, and continues today [1]. Although huge amounts of money have been spent and much has been done for this purpose, it is still not enough to empty hospital corridors of people waiting for rescue. Although a lot of research has been conducted, a lot of experimental data has been collected and a lot of articles have been published, it is still not enough to fully understand the mechanism of cancer initiation and progression. There are still phenomena during cancer development that are incomprehensible and therefore considered paradoxical [2]. Today, i.e., after 50 years, the war on cancer goes on, seemingly endlessly [3][4]. Today, a lot of cancer theories have been established (for example, more than 20 theories are presented in [5]), and new theories are introduced all the time, for example, the detached pericyte hypothesis [5]. Pursuant to another interesting idea, the main driver of cancer development is repeated loss of synchronization between the circadian clock (CC) and the cell cycle [6]. This loss of synchronization leads to arrest of the mitotic cell cycle, reprogramming, polyploidization and activation of the ploidy cycle [6]. Then, through depolyploidization, Hayflick’s limit is renewed, cells regain synchronization between CC, and the cell cycle and mitotic cell cycle are activated [6]. Other studies also indicate the importance of polyploidy during cancer development [7][8]. To answer to the question, “what is the reason for cancer, and what is the mechanism of its development”, it is necessary to combine existing theories into one unified theory on the basis of which it will be possible to interpret all phenomena (including that the occurrence of which is considered paradoxical) observed during cancer transformation and development. Most of these theories have been developed to explain phenomena that cannot be explained using the somatic mutation theory (SMT). SMT has been the dominant theory in the study of carcinogenesis for at least sixty years and says that cancer arises from a succession of driver mutations and clonal expansions [9][10]. These phenomena that cannot be explained using SMT (thus proving the weaknesses of SMT) are, among others, (a) causation of cancers by a chemical not known to damage genes, (b) lack of an inducing mutation (for example, in transgenic mouse tumors), (c) infectious causation of cancers and (d) regression of cancer to a benign tumor [11].
The reversal of cancer cells towards an atavistic form of life was formulated by some researchers as the atavistic theory of cancer [12][13][14][15][16][17][18][19][20][21][22][23]. It is well known that atavisms can occur experimentally without a mutational basis [24]. This feature of atavisms is especially important in light of the presented weaknesses of SMT and developing new models. Developed atavistic models take into account that cancer onset is a kind of reversion to the quasi-unicellular ancestral phenotype [24]. Evolution of life on Earth over a period of 4 billion years can be divided into two main subperiods. The first and longest subperiod of evolution was dominated by establishing mechanisms responsible for life of unicellular organisms. These mechanisms include mechanisms related to competition, survival and proliferation. Prokaryotic cells probably transitioned into unicellular eukaryotic cells between 2.0 and 1.4 billion years ago [25]. This transition was the basis for the next transition, i.e., the transition to multicellularity. The transition to multicellularity followed the first subperiod and occurred between 1.5 and 0.5 billion years before the present era. During this second, shorter subperiod of evolution, the newer mechanisms (including the pathways) to support multicellular life (inter alia, cell collaboration and differentiation) were established. In accordance with the atavistic cancer model, these newer mechanisms, because they were less well established during the shorter evolution subperiod, are more susceptible to damage than the conservative mechanisms responsible for unicellular life [26]. Damage to the mechanisms responsible for multicellular life can cause cancer transformation. Cancer transformation, according to atavistic cancer models, involves the switch (i.e., the transition) to atavistic unicellular life. This switch is characterized by the occurrence of the Warburg effect and activation of the atavistic mechanisms of competition, survival and proliferation typical of primitive unicellular organisms. A recently proposed exemplary atavistic model assumes that cancer onset and development can be described as a series of reversionary transitions. In accordance with this model (called the serial atavism model), cancer can be considered as not a single atavism with a multicellular-to-unicellular switch but as a sequence of atavistic reversions [24]. Activation of atavistic mechanisms implies the activation of processes that belong to the most conserved and protected processes supported by a myriad of built-in redundant pathways [26]. This may explain the metabolic flexibility in cancer cells that are able to upregulate their compensatory pathways following inhibition of the dominant metabolic pathway [27]. This metabolic flexibility leads to the development of resistance to metabolic inhibitors and is therefore a real challenge in the treatment of cancer [27]. Many attempts have been made to date to eliminate cancer cells, including chemotherapy, hormone therapy, hyperthermia, immunotherapy, photodynamic therapy, radiation therapy, stem cell transplant, surgery and targeted therapy. Striving to understand the universal mechanisms of cancer transformation and development is crucial, as these mechanisms should reveal new ways to eliminate cancer cells more effectively.

2. Cancer Transformation as a Loss of Control over Atavistic Functionalities

Results of studies on tumor development published to date (deep sequencing, multi-region sequencing and single-cell sequencing) indicate that a single normal cell is a common origin of cancer [31]. In order to increase the probability of survival, cancer transformation initiates the creation of multiple clones, along with activation of the ploidy cycle (see Introduction) [6][32]. Transformation also initiates cancer development, which, according to the universal model of cancer transformation and development (Figure 1), occurs as the development of a population of individual cloning cells. Due to the very high complexity of the task, establishing a universal model of cancer transformation and development can be treated as a process of successive extensions and improvements. The first approaches to establishing such a universal model were presented in previously published articles [28][29]. The universal model of cancer transformation and development (Figure 1) is presented from the perspective of the proposed layered model of evolution of cellular functionalities (especially from the perspective of losing control over functionalities of the unicellular layer), which can be considered a significant extension and improvement compared to the previously presented approaches. Figure 1, with a very synthetic explanation (compared to that previously presented in Figure 7 in [28] and Figure 3 in [29]) allows for a more complete understanding of the presented considerations. According to the universal model of cancer transformation and development, vertical and optional horizontal development can be distinguished [28]. Both vertical and horizontal cancer development occur through step-by-step changes of attractors, i.e., caner development shows attractor-like behavior. The idea of “cancer attractors” was first proposed by Stuart Kaufman and has been supported experimentally [33][34]. The use of the attractor idea has made it possible to explain why the cells of multicellular organisms are prone to oncogenesis [35]. In general, the application of the attractor concept allows the physical concept to be used in biological reality, where the term “attractor” denotes the configuration towards which the system evolves over time to achieve stability [36][37]. Attaining an attractor means that a given system configuration is stable enough to return to its original state after the disappearance of any small disturbances [37]. Additionally, in Figure 1, exemplary attractors of normal cell fates are marked on the vertical green axis. It should be noted that all normal cell fates are generated by cells trapped in one genome attractor. This is because genome DNA sequences in each cell nucleus are identical in human cells (and tissues of each individual) [38]. 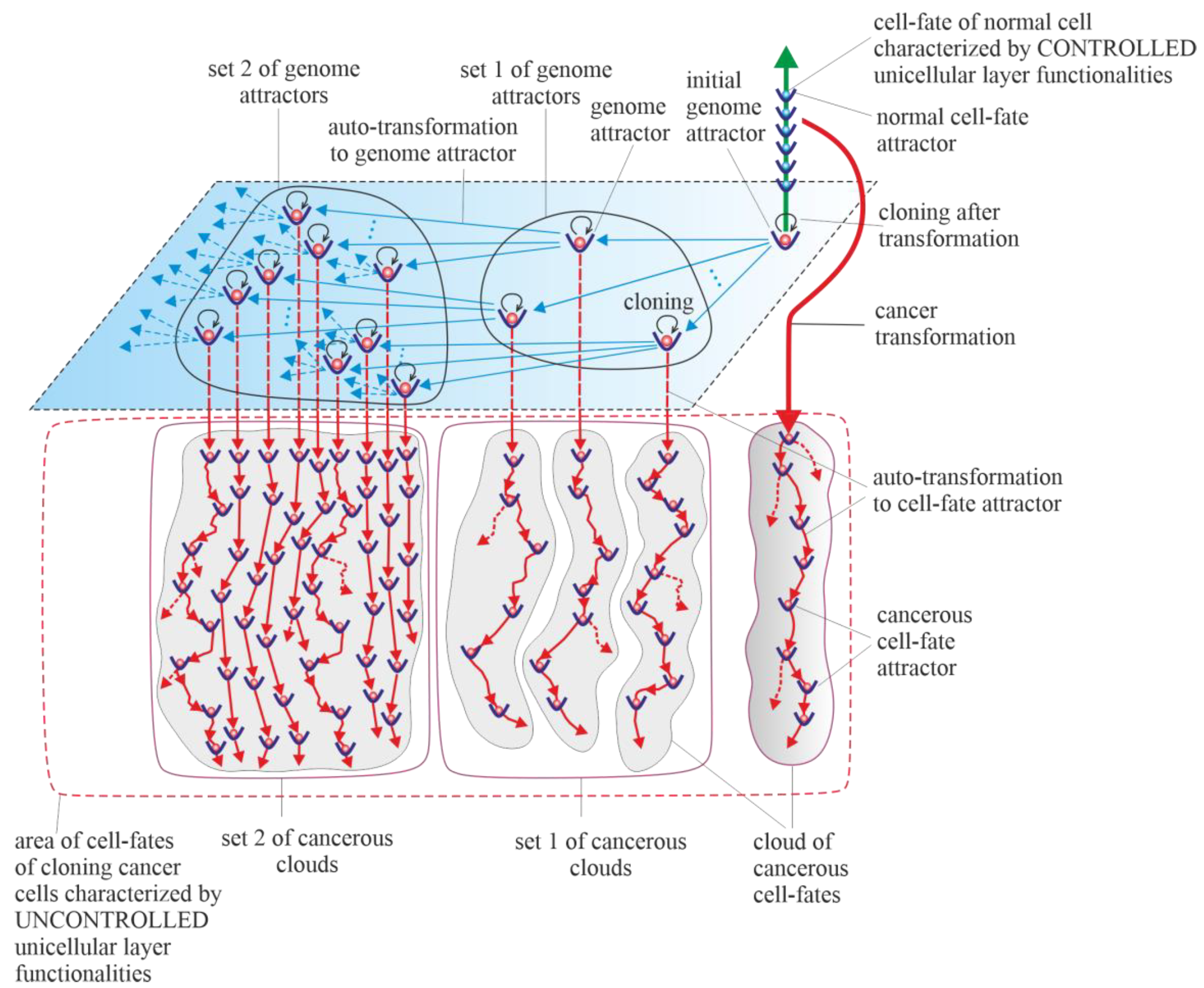 Teratomas and choriocarcinomas, as exemplary cancers without mutations, are formed by misplaced embryonic and placental cells [61]. These cells are characterized by altered expression of hundreds of oncogenes and tumor suppressors (silenced or induced by epigenetic mechanisms) compared to adult tissues [61]. In choriocarcinoma, HLA-G is demonstrated to change the tumor microenvironment through the inactivation of the local immune system at very high levels and functions [62]. Moreover, choriocarcinoma is characterized by overexpression of p53 and MDM2, along with overexpression of other genes (i.e., NECC1, epidermal growth factor receptor, DOC-2/hDab2, Ras GTPase-activating protein, E-cadherin, HIC-1, p16 and TIMP3) or downregulation via hypermethylation, with no evidence of somatic mutation [62]. In this light, a special case of vertical cancer development is purely vertical cancer development without any mutation. That means that during cancer development, cancer clones are trapped and kept in the initial genome attractor, and additionally, cancer development occurs without mutations (i.e., only as a result of bioenergetic problems that lead to subsequent destabilizations of cell fates and changes in cell-fate attractors).

8. Cancer Development as a Learning Process

Cancer progression can be considered a learning process [63]. This learning process is very costly because a large number of cancerous cells dies during cancer development [64][65][66]. Taking into account that the cancer cell-doubling time is around 1–2 days and that tumor-doubling time is around 60–200 days, the conclusion is that the vast majority of cancer cells die before they can divide [64][65][66]. Even advanced malignancies can exhibit such characteristics of growth (i.e., Gompertzian growth) [65]. In light of the universal model of cancer transformation and development, horizontal cancer development is driven by successive destructions of mechanisms responsible for monitoring genomic integrity. Consequently, a loss of genomic integrity can lead to genome instability (GIN) and, as a result, genome chaos and formation of unstable genomes (as an outcome of genomic chaos). Taking into account cancer Gompertzian growth, in light of the universal model of cancer transformation and development, only a small part of the unstable genomes can undergo transformation (by autotransformation to the genome attractor) to stable genomes and attain stability in genome attractors. It should also be taken into account that not all stable genomes have the potential to keep the cell alive. This means that only part of the clones with stable genomes can undergo successful vertical transformation and attain cell-fate stability in cell-fate attractors.

More
© Text is available under the terms and conditions of the Creative Commons Attribution (CC BY) license; additional terms may apply. By using this site, you agree to the Terms and Conditions and Privacy Policy.
Upload a video for this entry
Information
Subjects: Oncology
Contributor MDPI registered users' name will be linked to their SciProfiles pages. To register with us, please refer to https://encyclopedia.pub/register :
Andrzej Kasperski
View Times: 2599
Revisions: 4 times (View History)
Update Date: 06 May 2022
Table of Contents
1000/1000
Hot Most Recent