+1 point
Thank you for your contribution! You can also upload a video entry related to this topic through the link below: https://encyclopedia.pub/user/video_add?id=21646
Check Note
2000/2000
Applications of Antimicrobial Photodynamic Therapy

Originally discovered as a relatively new anticancer therapeutic technology, photodynamic therapy (PDT) has since evolved and is now used in many therapeutic technologies. For example, it is used against viruses, such as the recently reported antiviral activity against COVID-19, bacteria, fungi, and parasites, in treating neovascular disease, in environmental sanitation and pest control, and in many other applications.

Originally discovered as a relatively new anticancer therapeutic technology [1], photodynamic therapy (PDT) has since evolved and is now used in many therapeutic technologies. For example, it is used against viruses, such as the recently reported antiviral activity against COVID-19 [2], bacteria [3], fungi [4] and parasites [5], in treating neovascular disease [6], in environmental sanitation [7] and pest control [8], and in many other applications. Besides anticancer applications, photodynamic therapeutic applications against bacteria have defined the knowledge field of antimicrobial photodynamic therapy (aPDT) [9] and the allied healthcare variant known as photodynamic antimicrobial chemotherapy [10]. Common reference to both photodynamic antimicrobial chemotherapy and photoactivated chemotherapy (PACT) as antimicrobial chemotherapy is unfortunate because oxygen in the latter is not required [11]. PDT has been shown to kill many bacterial species in planktonic and biofilm formations [12][13]. Although aPDT photosensitizers have shown very little or no tendency to induce it [14][15][16], some mechanisms of bacterial resistance have been reported, including ABCG2 mediated efflux, DNA damage repair, procaspase damage-induced inhibition of apoptosis, heat shock protein upregulation, hypoxia, and antioxidant defense mechanisms [17]. Given that biofilm formation is one of the most important mechanisms for the development of bacterial resistance, there has been increasing focus on the development of new methods for the treatment of bacterial biofilms [18], among which PDT has been highly prized with an increasing number of research reports showing promising results in vitro and in vivo [19][20].
Furthermore, aPDT has been used in combination with several other therapeutic agents, with additive and synergistic efficacy enhancement [21][22]. aPDT combinations with chemotherapy have been studied for the potential treatment of bacterial infections [23]. Other combination therapy studies include PDT with anticancer chemotherapy [24], photothermal hyperthermia therapy (PTT) for anticancer applications [25], antibacterial applications [26], and antifungal applications [27]. PDT has also been studied in combination with magnetic hyperthermia therapy (MHT) for various applications including hard-to-reach cancers such as brain cancer [28] and bone tissue cancers [29]. As a therapeutic technology, MHT involves the temperature elevation of tissues in which embedded magnetic nanoparticles are energized using a high frequency alternating magnetic field generated by an appropriate MHT applicator [30].
When combined with cold atmospheric pressure plasma therapy (CAP), PDT has the potential to overcome hypoxia, which limits the concentration of reactive oxygen species that can be generated by PDT [31][32]. The reason for this is that CAP essentially introduces exogenous reactive gas species from a plasma jet (in the case of the direct CAP) or from a plasma activated fluid (in the case of the indirect CAP). When a gas such as helium or oxygen is passed over a high voltage electrode, reactive gas species are generated at room temperature in the gas phase, including high energy electrons and gas phase ionic species, creating a cold atmospheric pressure plasma gas as a controllable source of reactive species [33]. These reactive species are widely used to destroy undesirable cells directly or indirectly. Devices used in CAP include the dielectric barrier discharge device [34] PlasmaDerm® VU-2010 [35], the atmospheric pressure plasma jet kINPen® MED [36], and the SteriPlas [37], which are CE-certified as medical products to treat chronic wounds in humans with efficacy and a good tolerability.

Deeper understanding of the biofilm structure and how it contributes to antibiotic resistance has improved since the late 1970s [38], when they were first recognized in clinical samples. Biofilms are constituted from microbial communities that intimately associate with surfaces to sustain viability and improve their resistance up to a thousand times more than their planktonic forms; the surface contact and association is a key requirement for the biofilm formation mechanism [39]. Biofilms are characterized by an extensive multi-channel-permeated extracellular 3D matrix among the cells, consisting of polymeric materials, including polysaccharides and peptides, nucleic acids and lipids [40]. The biomolecule constitution of the biofilm matrix and extracellular polymeric substances (EPS) has been described in more detail [41]. It plays a vital role as a living environment for the bacterial cells in the biofilm [42] and as an infective mechanism through detachment and re-attachment [43]. Researchers have recognized several stages in biofilm formation, including contact and adhesion, formation of the colony, biofilm architecture maturation, final detachment and distal infection.
Therefore, bacterial biofilms enhance antibiotic resistance and further infection [44]. Furthermore, the formation of biofilm is a collective behavior that is triggered by cell-to-cell proximity and facilitated by a bacterial quorum-sensing mechanism [45]. Due to their importance for therapeutic strategy formulation, several studies on the physical, chemical and mechanical properties of biofilms such as substrate adhesion, adsorption of chemical substances, and admission of other cells, have been conducted [46][47][48][49]. These studies have revealed that antibiotics acting on their own do not alter the biofilm structure to gain sufficient access to the constituent bacterial community. Many of these properties can be exploited to overcome the formidable bacterial biofilm formation defense mechanism.
For example, their sessile nature may permit therapeutic targeting and imaging for precision drug delivery. The bacterial biofilm is a hydrophilic and wettable environment, amenable to aqueous soluble drugs and delivery strategies. Variable oxygenation levels have been reported, and the multi-channel 3D structure and reported hypoxia suggest limited susceptibility to the type II mechanism of PDT [50]. The chemical composition of the EPS of the biofilm may be among the key considerations for drug design and targeting strategies, because drugs and photosensitizers that bind to any of the known constituents of the EPS biofilm matrix could contribute toward biofilm structure disruption [51]. For these reasons, the affinity for biofilm penetration may be a key factor in therapeutic strategies.

In the aPDT approach, absorbed light energy is always used for bactericidal or bacteriostatic impact through two key molecular photosensitizer-mediated mechanisms. While the type I mechanism is based on radical-forming hydrogen transfer from a light energized photosensitizer directly to biomolecules, the type II mechanism involves an initial photosensitization of oxygen to produce reactive oxygen species, which in turn attack biomolecules [52]. The mechanistic basics of type I and type II may be illustrated using a Jablonski diagram as shown in Figure 1, showing the direct and the reactive oxygen species mediated pathways. Studies have shown that both mechanisms cause irreversible chemical reactions that alter the functionality of biomolecules and disrupt their environment [53], regardless of whether these biomolecules are cellular, EPS matrix components or other functional constituents of the biofilm [54]. These studies showed that aPDT is not prevented by the biofilm from achieving an increase in intracellular reactive oxygen species. At the same time, several studies have focused on the impact of aPDT on the biofilm matrix strength and constituent pathogen metabolic activity [55][56]. For example, bacterial pathogen reduction and eradication was found to be accompanied by reactive oxygen- induced oxidative stress, biofilm matrix weakening, loss of adhesion and component changes [57]. 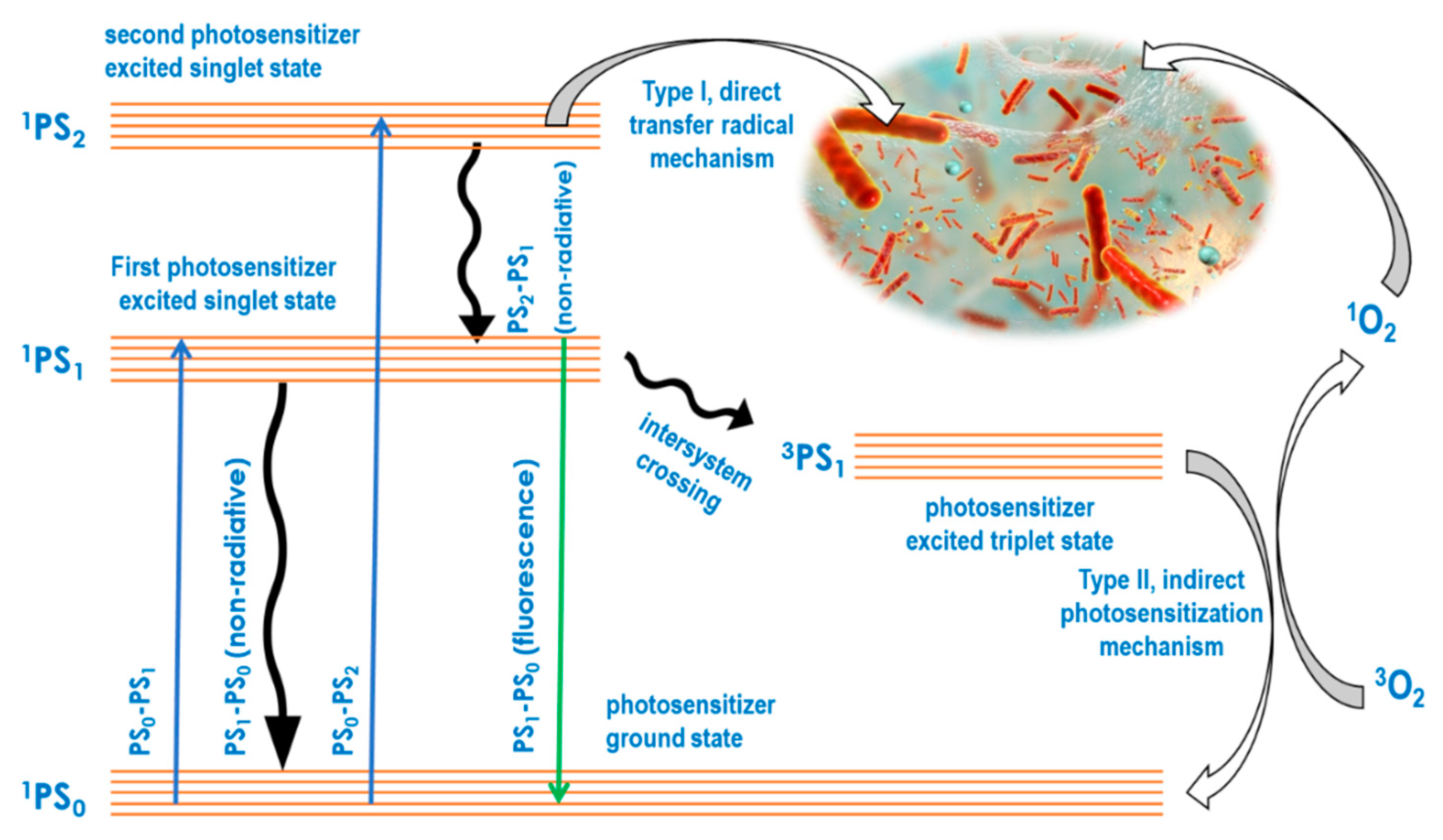 More
© Text is available under the terms and conditions of the Creative Commons Attribution (CC BY) license; additional terms may apply. By using this site, you agree to the Terms and Conditions and Privacy Policy.
Upload a video for this entry
Information
Subjects: Biochemistry & Molecular Biology; Pharmacology & Pharmacy
Contributors MDPI registered users' name will be linked to their SciProfiles pages. To register with us, please refer to https://encyclopedia.pub/register :
Sandile Phinda Songca
,
Yaw Adjei Anane
View Times: 173
Revisions: 2 times (View History)
Update Date: 13 Apr 2022
Table of Contents
1000/1000
Hot Most Recent