+1 point
Thank you for your contribution! You can also upload a video entry related to this topic through the link below: https://encyclopedia.pub/user/video_add?id=21595
Check Note
2000/2000
The NIMA Family of Kinases

The Never in mitosis gene A (NIMA) family of serine/threonine kinases is a diverse group of protein kinases implicated in a wide variety of cellular processes, including cilia regulation, microtubule dynamics, mitotic processes, cell growth, and DNA damage response. The founding member of this family was initially identified in Aspergillus and was found to play important roles in mitosis and cell division. The yeast family has one member each, Fin1p in fission yeast and Kin3p in budding yeast, also with functions in mitotic processes, but, overall, these are poorly studied kinases.

S. pombe and S. cerevisiae each contain one member of the NIMA family of kinases, Fin1p in fission yeast and Kin3p in budding yeast [21][22]. Neither of these proteins is essential for growth in yeast, and, functionally, neither is able to rescue Aspergillus nimA mutants. Kin3p is not well characterized, but it appears to be functionally related to human Nek2, which will be discussed later. There are many parallels between the structure and function of Aspergillus NIMA and yeast Fin1p. One significant difference, however, is that NIMA is indispensable for G2/M progression and mitosis, whereas Fin1p is not. Additionally, Moura et al. [23] showed that Kin3p was required for proper DNA checkpoint arrest at G2/M following DNA damage. A growing body of evidence has also implicated several members of the mammalian NIMA family in playing a role in DNA checkpoint control; this will be discussed in greater detail later.
Fin1p is an 83 kDa protein, overexpression of which leads to premature chromatin condensation during any point in the cell cycle, independently of Cdc2 activity [21]. fin1 null cells are viable but show an elongated morphology that is characteristic of cell cycle delay. The cell cycle delay occurs in G2; however, unlike Aspergillus nimA mutants, in yeast Cdc2 activation is delayed. Structurally, Fin1p is similar to NIMA, with an N-terminal kinase domain followed by a C-terminal coiled-coil motif and PEST sequences. Also, like NIMA, the levels and activity of Fin1p are tightly regulated, with maximal activity observed from metaphase–anaphase transition to G1 [24]. The protein localizes to the spindle pole bodies in late G2 and remains there for the duration of mitosis. Furthermore, fin1 null cells show perturbations of the nuclear envelope, suggesting a role for Fin1p in regulating nuclear membrane dynamics during mitosis in yeast. Interestingly, this phenotype was greatly enhanced in the cut11 null background. Cut11p plays a role in anchoring spindle pole bodies to the nuclear envelope during mitosis, and is also associated with the NPCs during interphase. Cut11p has two Fin1p consensus phosphorylation sites, however Fin1p does not phosphorylate Cut11p in vitro. Nevertheless, it is likely that Fin1p regulates Cut11p function in order to modulate nuclear membrane dynamics during mitosis. Another protein that has been found to be regulated by Fin1p is Plo1p [25], with Plo1p being the yeast homolog of Polo kinase (for a review of Polo kinases and their function, see [26]). Fin1p was found to regulate the association of Plo1p with spindle pole bodies during late G2 and mitosis [25], and overexpression of Fin1p caused premature recruitment of Plo1p to the spindle pole bodies.
The yeast homologues of NIMA have provided insight into the function of the protein, but with clear differences from Aspergillus nimA. Morphological differences, especially the lack of a nuclear envelope breakdown and associated mechanistic differences, in the nuclear structure during mitosis between higher eukaryotes and yeast also make it difficult to relate some of the observed effects to mammalian analogues.

There are 11 members of the NIMA family of kinases (Neks for NIMA rElated Kinase) in humans, named Nek1 through Nek11. The first mammalian NIMA-related protein kinase cloned was Nek1 [27], followed by subsequent identification of others, with the naming following the order of identification. All the Neks share a similarly conserved kinase domain that define them as NIMA-related kinases, and most (with the exception of Nek3, Nek5, and Nek11) contain a tyrosine inhibitory residue that protrudes into the catalytic site. Phylogenetic analysis of the full-length human Neks groups them into three distinct clades (Figure 1); clade 1 consisting of Nek4, 6, 7, 8, 9 and 10; clade 2 consisting of Nek11; and clade 3 consisting of Nek1, 2, 3, and 5. If researchers look only at the kinase domain, the phylogenetics change somewhat (Figure 2), but the number of clades remains the same. In this case, clade 1 consists of Nek6, 7, and 10; clade 2 consists of Nek1, 2, 3, 4, 5 and 11; and clade 3 consists of Nek8 and 9. Multiple sequence alignment also demonstrates that, although the majority of the Nek kinase domains are relatively similar, there are some outliers (Figure 2). Most notably, the kinase domain of Nek10 is significantly truncated versus the others by well over 50 amino acids. Other notable differences include small insertions found in Nek2, 10, and 11; as well as extended C-terminus residues found in Nek6 and 7. Interestingly, Nek10, lacking the C-terminus found within the kinase domains of other mammalian Neks, appears to be a dual-specificity kinase with serine/threonine and tyrosine phosphorylation activities [28]. The difference in the two alignment outcomes, either for the whole kinase or the kinase domain only, suggests different evolutionary constraints. It is likely that the kinase domain is more restricted in its ability to change and would result in a more conservative degree of evolutionary alterations. However, the whole protein is less restricted, so would have regions that evolve more rapidly to fit specific functional needs, which is not possible for the catalytically active domain that is restricted in evolution by its need to be enzymatically active. 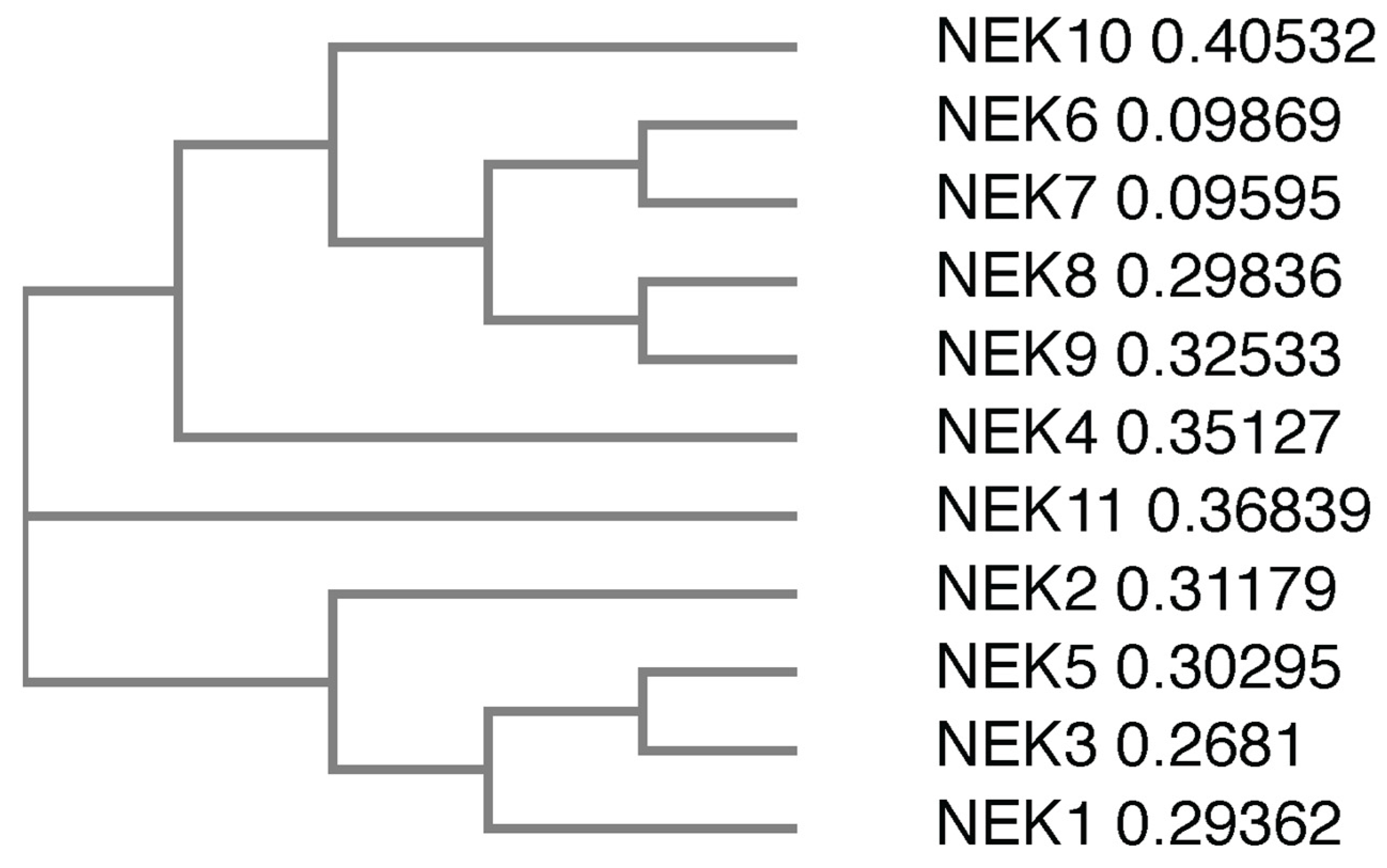 Figure 2. Phylogenetic tree and protein sequences alignment of the human Nek proteins kinase domains. All kinase domain protein sequences were obtained from UniProtKB. Protein sequences were subsequently submitted to Clustal Omega, which generated (A) a phylogenetic tree and (B) a multiple protein sequence alignment of the 11 human Nek protein kinase domains. Colours refer to amino acid properties as follows: red—small and hydrophobic including aromatic but excluding tyrosine; blue—acidic; magenta—basic excluding histidine; green—charged with hydroxyl, amine, or sulfhydryl groups, and glycine. * –fully conserved residues, : –conservation between groups of residues with strongly similar properties, . –conservation between groups of residues with weakly similar properties. The numbers next to the protein names in (A) refer to the sequence distance measure.
Structural data on the various human Neks are scant, so researchers used artificial intelligence-based structural analysis tools to predict the potential structures of the human Nek kinase family (Figure 3). As the analysis shows, beyond the globular kinase domain, the various Neks differ significantly in structure. Notably, Nek8 and 9 have a characteristic seven-propeller Regulator of Chromosome Condensation 1 (RCC1)-like domain, which is located distinct from the kinase domain. It is hard to conclude how accurate the predicted structures are due to there being only three resolved Nek structures in the Protein Database (PDB); nevertheless, this provides a foundation for future structural analyses and may give valuable insights for mutagenesis studies despite certain oddities observed in some of the predicted structures. Importantly, the predicted structures show great diversity in how these proteins are shaped, reflective of their diverse functions within cells. 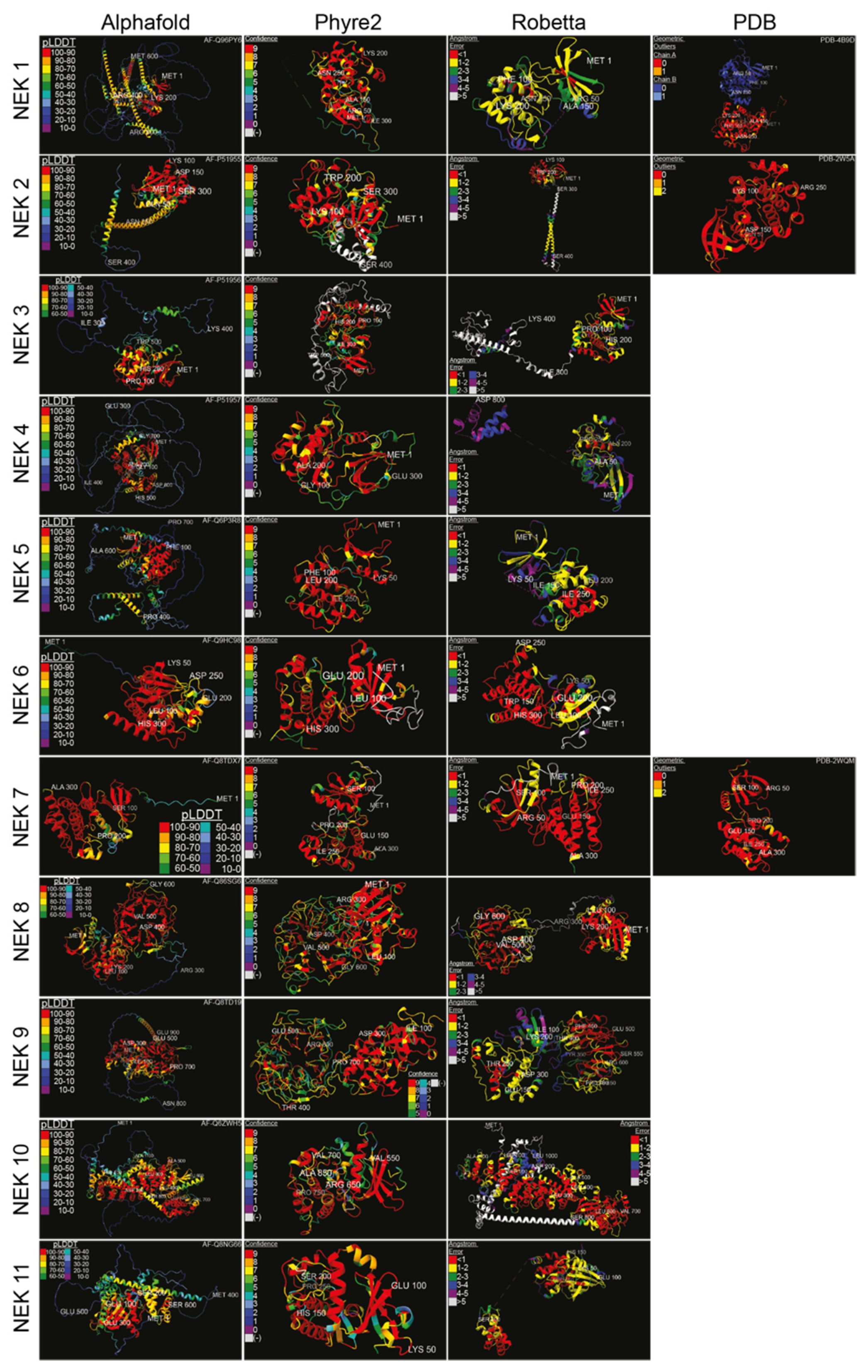 Figure 3. Structure predictions and known crystal structures of the human Nek proteins. Amino acid sequences were input into Robetta’s RoseTTAFold [29] and Phyre2′s Intensive [30] algorithms, with the resulting structures visualized in the first quarter of 2022. Amino acids were truncated from the C-terminus if necessary. Alphafold [31] and PDB structures were from [32] for Nek1 kinase domain, [33] for Nek2, and [34] for Nek7, with the accession numbers displayed. Structures were colour-coded according to the source’s measurement of error. High-error sequences were removed for visual clarity. Structures were visualized, colour-coded, and imaged with ChimeraX [35] (pLDDT = per-residue confidence score; (-) = outside of confidence range).
Researchers have also collected subcellular localization data for each Nek available from The Human Protein Atlas (Figure 4). Most of the Neks showed at least partial cytoplasmic localization, with some showing more predominant nuclear staining. In particular, Nek7 and 11 showed strong nuclear staining with reduced cytoplasmic localization, while Nek2, 6, and 10 showed nucleocytoplasmic distribution; lastly, Nek1, 3, 4, and 9 showed predominantly cytoplasmic localization during interphase. They know from the literature that the distribution of these proteins changes with the cell cycle; therefore, only cells that are in interphase and are not actively dividing are shown for simplicity.

Figure 4. Subcellular localization of human Nek proteins in U2OS and A-431 cells. All images were obtained from the Human Protein Atlas and is reprinted with permission under Creative Commons Attribution-ShareAlike 3.0 International License from [36], copyright 2022 Human Protein Atlas, which did not have images for human Nek5 and Nek8; thus, they have been excluded. All images were taken in the human osteosarcoma cell line U2OS, except for Nek7, which was imaged in the human epidermoid carcinoma cell line A-431. The bar in the lowermost right image represents 20 μm and is the same for all panels.

More
© Text is available under the terms and conditions of the Creative Commons Attribution (CC BY) license; additional terms may apply. By using this site, you agree to the Terms and Conditions and Privacy Policy.
Upload a video for this entry
Information
Subjects: Biochemistry & Molecular Biology
Contributors MDPI registered users' name will be linked to their SciProfiles pages. To register with us, please refer to https://encyclopedia.pub/register :
Peter Pelka
,
Nikolas Akkerman
View Times: 144
Revisions: 2 times (View History)
Update Date: 12 Apr 2022
Table of Contents
1000/1000
Hot Most Recent