+1 point
Thank you for your contribution! You can also upload a video entry related to this topic through the link below: https://encyclopedia.pub/user/video_add?id=21318
Check Note
2000/2000
Surgical Management of Rectal Cancer

The completeness of the mesorectum, as well as other pathologic parameters, such as lymph node harvest and margin involvement, are critical for pathologic staging, prognosis, and subsequent therapy of surgical patients [1][2]. Consequentially, surgical techniques that fail to meet these pathologic standards may be considered inferior to conventional techniques.
The degree of surgical resection depends on the location and circumferential spread of the tumor. The three main resection types for tumors within 15 cm of the anal verge are classified as low anterior resection (LAR) and abdominal perennial resection (APR). Low anterior resection is best utilized for tumors of the rectosigmoid region, where partial or total mesorectal excision is required to obtain an adequate gross margin on the surgical specimen. This surgical distal margin is a continued topic of debate and depends on the height of the tumor in the mesorectal fascia along with its relation to the pelvic floor and anal verge. For proximal, upper rectal cancers tumors in the proximal mesorectal fascial envelope, specific mesorectal excision (partial) is required to obtain a 5 cm gross distal margin. For tumors of the mid-mesorectal envelope, the adequate distal gross margin decreases to 2 cm. Tumors of the distal mesorectal envelope post the greatest difficulty in decision making, as the decision to offer patients sphincter preserving therapy becomes a difficult balancing act with the desire to decrease local recurrence rates. In ultralow anterior resections, the ability to obtain even a 1 cm gross margin in conjunction with a total mesorectal excision has been demonstrated to be an acceptable outcome [3][4][5]. The inability to obtain even a 1 cm gross margin with a total mesorectal excision necessitates the utilization of an abdominal perennial resection (APR) and end colostomy.
Further complicating the decision of what surgery to offer is the functional outcome that ultralow anterior resections can confer on a patient’s quality of life. Low anterior resection syndrome (LARS) consists of a constellation of findings, including fecal urgency, incontinence, increased frequency, constipation, feelings of incomplete evacuation, and bowel-emptying difficulties. Short-term symptoms (within 6–12 months of surgery) are usually due to temporary neorectal irritability in the postoperative period and can resolve with time, while long-term symptoms of LARS (extending more than 12 months after surgery) are more likely permanent. The prevalence of LARS is high, with approximately 80–90% of individuals reporting varying degrees of symptoms [6].

Laparoscopic surgical resection for rectal cancers has become increasingly popular over the conventional open technique due to positive patient factors, such as decreased pain, lower morbidity, and faster recovery [7][8]. Additionally, the technique has been found to be non-inferior to open techniques in multiple randomized controlled trials in terms of recurrence, overall survival, and disease-free survival [9][10]. With the increasing prevalence of robotic surgery in the United States and the demonstrated efficacy of laparoscopic surgery in the completion of total mesorectal excision, studies evaluating robotic surgery’s role in the treatment of rectal cancer must be explored.
Utilization of the da Vinci Surgical System (Intuitive Surgical Inc., Sunnyvale, CA, USA) for the completion of a robotically assisted total mesorectal excision has valuable advantages over traditional laparoscopic TME. The use of the robot can allow for an immersive 3-dimensional depth of field, utilization of seven degrees of freedom with its articulating instruments, and a stable camera platform. The first study to evaluate the efficacy of the robot in rectal cancer in a randomized clinical trial setting was completed by the ROLARR Randomized Clinical Trial in 2017 [11]. This was a randomized clinical trial that included 471 patients from 29 different sites across 10 different countries and evaluated all levels of anterior resection (high vs. low) and abdominoperineal resection. These patients were designated to receive robotic-assisted or conventional laparoscopic TME. The conversion rate in the robotic cohort was 8.1%, while the conversion rate in the laparoscopic cohort was 12.2%, which demonstrated a distinct trend towards superiority but did not reach statistical significance. In addition, none of the other eight reported prespecified secondary endpoints demonstrated statistical differences between the two cohorts.
Rouanet et al., in 2018, building on the non-significant trend of the ROLARR study to have less conversion to open TME, evaluated their single-center experience with robotic and laparoscopic sphincter sparing total mesorectal excision [12]. Their data suggested that in sphincter sparing TME, the utilization of the robotic platform resulted in mixed results. There were no differences in overall survival, R1/R0 resection rates, TME grading, length of the distal margin, and circumferential radial margin positivity. There was a difference in the open conversion rate, with robotic TME possessing a conversion rate of 2.0% as opposed to 9.5% found in laparoscopic TME. There were also differences in the median hospital length of stay, with robotic TME patients being more likely to be discharged before postoperative day seven (22% vs. 5.5%). Robotic TME was also associated with a lower number of harvested lymph nodes at pathologic evaluation (15 vs. 19 lymph nodes). From their data, Rouanet et al. concluded robotic surgery, when utilized for patients with difficult anatomy (BMI > 30, low coloanal anastomosis, intertuberous distance under 10 cm, and mesorectal fat area <20.7 cm2), contradicted the ROLARR study by demonstrating superior short-term outcomes and overall survival.
Concurrently, in 2018, a smaller randomized control trial out of the National Cancer Center of South Korea highlighted the advantages of robotic TME [13]. Their patient population consisted of cT1-3NxM0 patients who were stratified into robotic TME or conventional laparoscopic TME. Outcomes included quality of the TME sample obtained, circumferential and distal resection margins, the number of harvested lymph nodes, morbidity, bowel function recovery, and quality of life. Their randomized clinical trial demonstrated similar rates of conversion to open surgery (1.5% vs. 0%), distal resection margins (1.5 vs. 0.7 cm, p = 0.11), circumferential resection margin positivity (6.1% vs. 5.5%), and rates of complete TME (80.3% vs. 78.1%, p = 0.599). Of interest, there were higher harvested lymph nodes (18 vs. 15 lymph nodes, p = 0.04), which contradicted Rouanet et al.’s retrospective review. Operative times in the robotic cohort were, on average, 112 min longer, but when evaluated in patients with a BMI over 25, the statistical significance disappeared, suggesting that the robot may play a greater role in patients with higher BMI. With similar results in the two groups, they concluded that equivalent outcomes were achievable when comparing robotic TME and laparoscopic TME.
While the operative outcomes appear similar between robotic and laparoscopic TME, several studies have attempted to pool data to identify overall trends. In one meta-analysis, seventeen retrospective reviews and three randomized control trials were combined for analysis [14]. The collective risk of open conversion statistically favored robotic TME in the retrospective cohort (Odds ratio 0.26 [95% CI, 0.17 to 0.38]), while the randomized control trials trended towards favoring robotic as well (Odds ratio 0.63 [95% CI, 0.35 to 1.13]). Operative time was also statistically longer in both the retrospective reviews and the randomized control trials, with mean differences of 50.35 and 54.4 min, respectively. In the retrospective reviews and the randomized control trials, there were no differences in overall survival, 3-year disease-free survival, local recurrence, lymph nodes harvested, distal margin length, positive circumferential radial margins, and length of stay. With the equivalency of outcomes demonstrated across studies, attention must be turned to the cost implications of performing robotic TME. In a recent meta-analysis combining cost data from robotic and laparoscopic TME, six out of seven studies demonstrated a significantly higher total cost with robotic TME. Four out of four studies in the meta-analysis identified higher operative cost with robotic TME, and zero out of five studies demonstrated no hospital cost savings with robotic TME [15]. Across the board, robotic TME has been associated with increased healthcare expenditure.
With the equivalent outcomes between robotic TME and laparoscopic TME when universally applied to all patients, one must consider the burden to the healthcare system that robotic surgery conveys. Though no significant outcomes have been identified, robotic TME may play a beneficial role in overweight male patients requiring low coloanal anastomosis.

Traditional transabdominal approaches have been primarily utilized for the surgical resection of low to mid-rectal tumors. With the heterogeneity of patient pelvic anatomy, several MRI-based scoring systems for surgical resection difficulty have been proposed to identify patients in whom a traditional top-down dissection would be difficult [16][17]. Factors identified as causing increased surgical difficulty with the traditional transabdominal approach include high BMI, coloanal anastomosis, short distance between the lowest points of the ischial tuberosities, and a large cross-sectional area of mesorectal fat. In mid- and low-rectal cancer, the forward tapering of the mesorectum in the pelvis and forward angle of the distal rectum facilitate a more difficult surgical dissection leading to a greater propensity for incomplete mesorectal excision and involved circumferential resection margins.
As a tool for improved visualization with surgical dissection, a combination transanal transabdominal procedure was first described in 1990 [18]. This transanal transabdominal procedure was later adapted by Lacy in 2010 to incorporate a single port laparoscopic platform to facilitate better visualization during transanal TME (TaTME) (Figure 1 and Figure 2) [19]. TaTME has grown in popularity for difficult mid- and low-rectal cancers and can be a powerful tool in sphincter sparing rectal cancer excision. Multiple studies have identified the efficacy of transanal surgical dissection with acceptable postoperative complication rates and TME specimen completeness ranging from 84.0% to 97.1%, but these were small case series and had no direct comparison to the traditional transabdominal approach [19][20][21][22][23]. In the only randomized clinical trial comparing TaTME to traditional transabdominal TME, Denost et al., in 2014, randomized 100 patients with low-rectal cancers (<6 cm from the anal verge) to either TaTME or traditional transabdominal TME [24]. Their primary outcome was a combination of markers for quality oncologic resection (circumferential resection margin, mesorectum grade, and total lymph nodes identified on pathologic evaluation). When compared, the TaTME group and the traditional transabdominal TME group did not differ by any notable descriptive variables. When outcomes were compared, the rate of positive circumferential resection margin decreased significantly when TaTME was employed (4% vs. 18%, p = 0.025), with no difference in TME quality, morbidity, number of lymph nodes located at pathologic evaluation. Denost et al. concluded that the TaTME approach reduced the risk of positive circumferential resection margin, as compared with the conventional abdominal dissection in low-rectal cancer, suggesting that perineal rectal dissection could become the new standard in laparoscopic sphincter-saving resection for low-rectal cancer. Denost’s study did not evaluate long-term survival, disease-free survival, or local recurrence of the TaTME procedure. 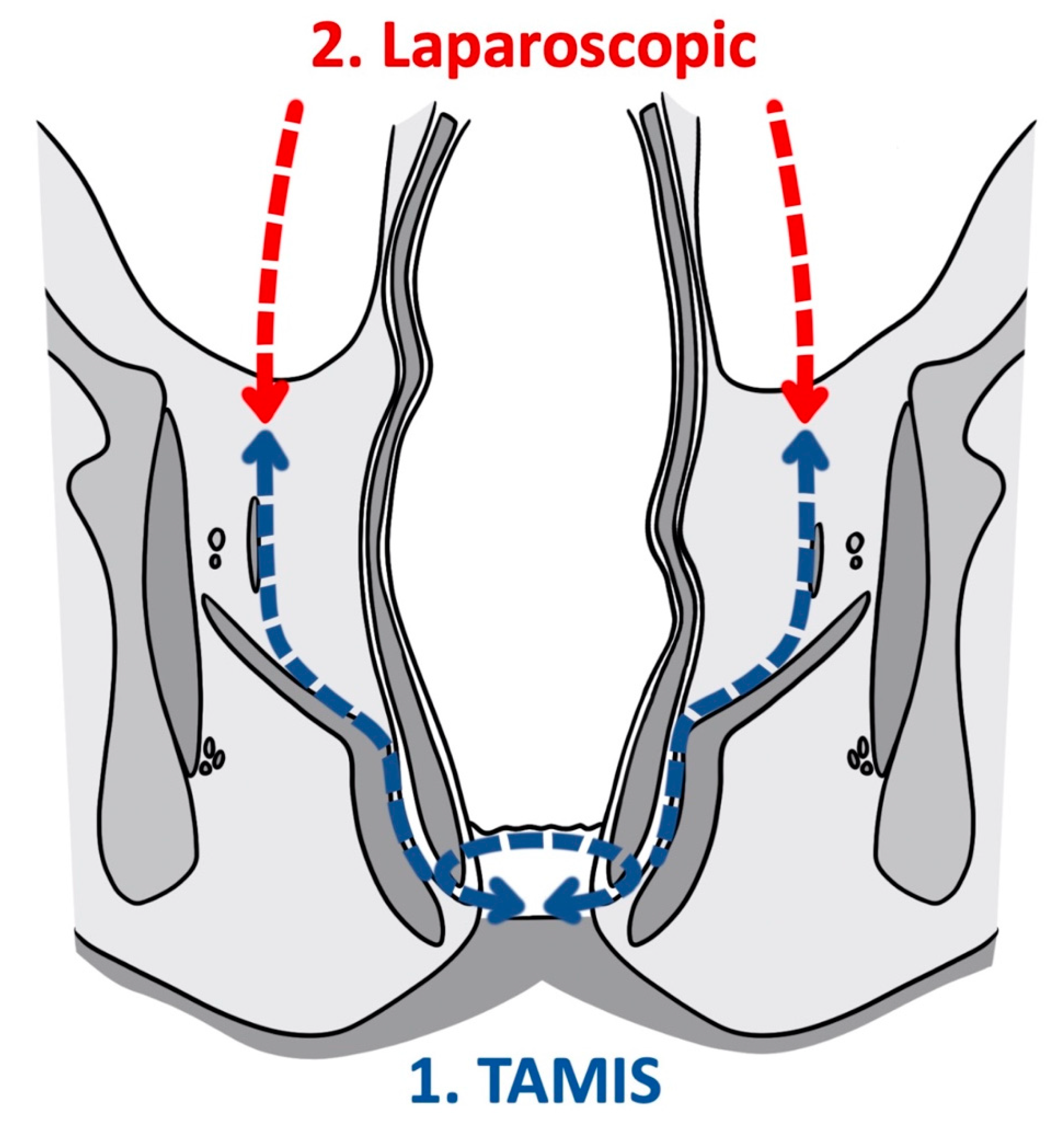 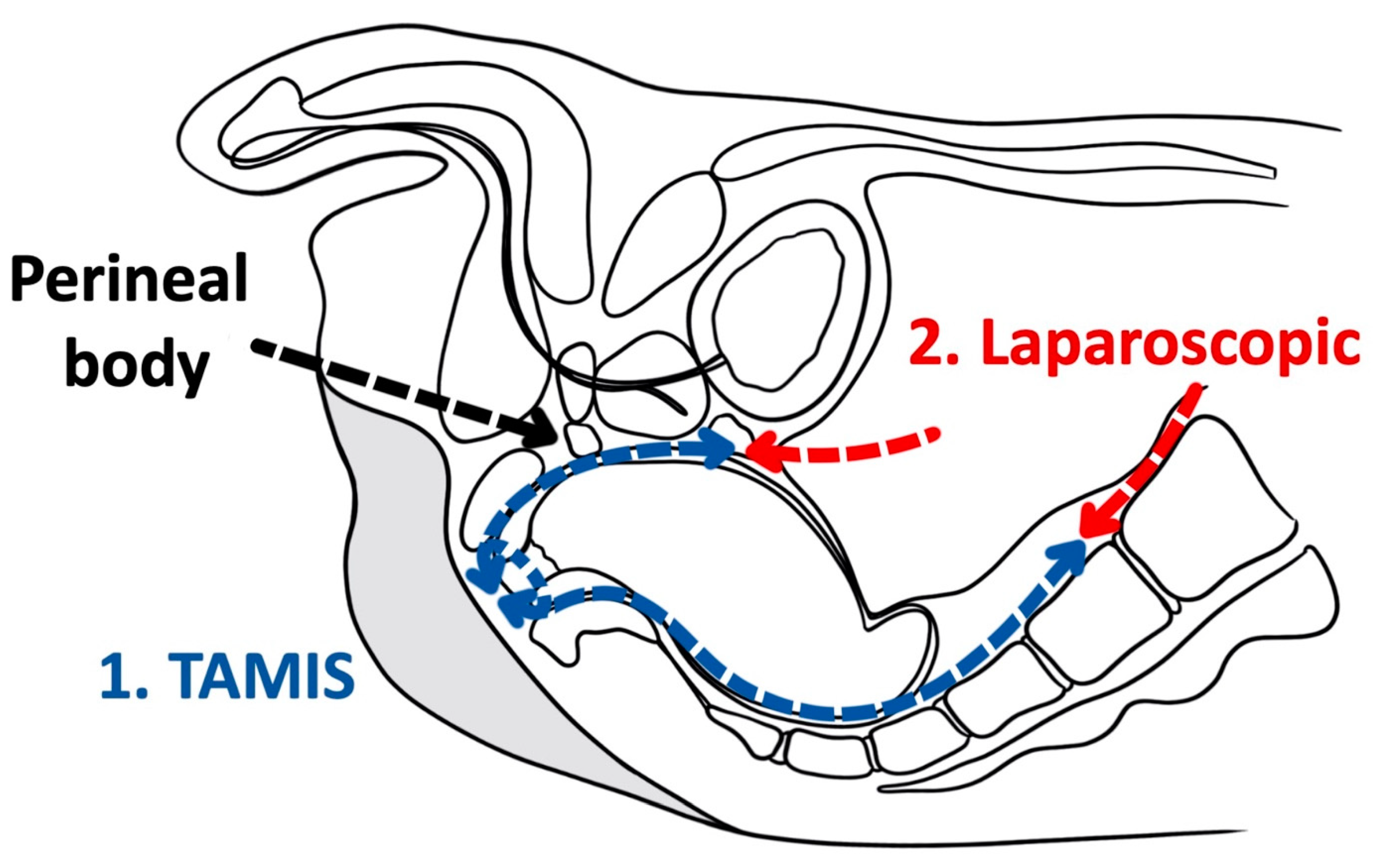 Figure 2. Transanal total mesorectal excision (Saggital).
TaTME is a powerful tool in facilitating increased visualization of the low-rectal dissection of the distal mesorectum that, in cases of unfavorable pelvic anatomy, traditional transabdominal TME cannot provide. To truly identify TaTME as the preferred method for surgical dissection of low-rectal tumors, long-term oncologic outcomes must be compared to traditional transabdominal TME. The COLOR III trial, created by Deijen et al., has been designed to compare local recurrence, disease-free, and overall survival transanal and laparoscopic TME for mid- and low-rectal cancer with the expected end date of May 2025 [25].

More
© Text is available under the terms and conditions of the Creative Commons Attribution (CC BY) license; additional terms may apply. By using this site, you agree to the Terms and Conditions and Privacy Policy.
Upload a video for this entry
Information
Subjects: Anatomy & Morphology
Contributors MDPI registered users' name will be linked to their SciProfiles pages. To register with us, please refer to https://encyclopedia.pub/register :
Jordan Wlodarczyk
,
Sang W. Lee
View Times: 99
Revisions: 3 times (View History)
Update Time: 06 Apr 2022
Table of Contents
1000/1000
Hot Most Recent