+1 point
Thank you for your contribution! You can also upload a video entry related to this topic through the link below: https://encyclopedia.pub/user/video_add?id=20937
Check Note
2000/2000
Neutrophil Extracellular Traps in Cancer Therapy Resistance

Neutrophils and their products are increasingly recognized to have a key influence on cancer progression and response to therapy. Their involvement has been shown in nearly every aspect of cancer pathophysiology with growing evidence now supporting their role in resistance to a variety of cancer therapies. Recently, the role of neutrophils in cancer progression and therapy resistance has been further complicated with the discovery of neutrophil extracellular traps (NETs). NETs are web-like structures of chromatin decorated with a variety of microbicidal proteins. They are released by neutrophils in a process called NETosis. NET-dependent mechanisms of cancer pathology are beginning to be appreciated, particularly with respect to tumor response to chemo-, immuno-, and radiation therapy.

Although few studies examine the clinical association between circulating NET levels and response to chemotherapy, preliminary in vitro and in vivo data supports NETosis as a mechanism of chemoresistance. Dr. Nefedova’s group [1] reported that neutrophils exhibited potent chemoprotective effects and played a functional role in promoting multiple myeloma (MM) cell survival in response to doxorubicin. Notably, the researchers reproduced this finding with human cells, finding that mature neutrophils from the bone marrow of MM patients protected various MM cell lines from doxorubicin [1]. Mechanistically, neutrophil-dependent chemoprotection seems to be driven by soluble factors produced by TANs in TME [1]. The same group later built upon this work by demonstrating NETosis as a mechanism of this neutrophil-dependent MM chemoresistance [2]. The researchers’ imaging flow cytometry and confocal microscopy results showed that NETs could be internalized by neoplastic cells and subsequently bind to and detoxify various anthracycline drugs such as doxorubicin [2]. Degrading NETs through DNase treatment abrogated the observed effect and restored chemosensitivity in their animal models, demonstrating a functional role for NETs in chemoresistance [2]. Although this finding has yet to be corroborated in other tumors, this emerging evidence is notable since it raises NETs as therapeutic targets for the improvement of chemotherapy response.

Immunotherapy is an emerging systemic cancer therapy and several clinical trials have shown promising results for checkpoint blockade immunotherapy across various neoplasms [3][4][5][6][7][8][9][10][11][12][13]. Several checkpoint inhibitor drugs have been developed that target the PD-1/PD-L1 axis, promoting T cell activity against cancer [14][15][16][17]. Levels of circulating neutrophils have been previously associated with poor response to checkpoint blockade immunotherapies, and recent evidence has implicated NETosis as a possible mechanism of such resistance [18][19][20][21]. NETs were shown to underscore immunotherapy resistance in pancreatic ductal adenocarcinoma by Zhang et al. [20], who reported that neutrophils recruited by interleukin-17 (IL-17) undergo NETosis and bar CD8+ T cells from cancer cells. The researchers found that IL-17 blockade was able to sensitize the neoplasms to checkpoint blockade [20]. Interestingly, abrogating NETosis was found to lead to the same immunotherapy-sensitive phenotype, demonstrating a functional role for NETs in immunotherapy resistance [20]. Although human data on NETs in immunotherapy resistance remains scant, the preclinical data reported from Zhang et al. nonetheless points to the relevance of NETs in fostering an immunosuppressive TME that abrogates efficacy of immunotherapy [20].
Such NET-associated immunosuppression was further corroborated by Teijeira et al. [19] who found that CXCR1 and CXCR2 chemokine receptor agonists induced the production of NETs, which in turn protected tumor-cells from immune cytotoxicity, curtailing the efficacy of checkpoint blockade. In vitro, the researchers reported that NETs coat tumor cells, physically obstructing contact with CD8+ T cells and natural killer cells [19]. Such cytotoxic protection was verified as NET-dependent since DNase 1 treatment restored proper effector-target contact and the consequent killing of cancer cells [19]. Their intravital microscopy experiments in murine models of Lewis lung carcinoma validated these conclusions in vivo [19]. The clinical relevance of this study is underscored by their finding that NETs act as described to limit response to checkpoint blockade immunotherapy, the efficacy of which was restored with the pharmacological targeting of NETs [19]. This data supports the need to further investigate the combinatorial use of NET-targeting therapeutics in patients that would otherwise respond poorly to immunotherapy.

Radiation therapy is used as a treatment modality for a variety of neoplasms, yet a substantial proportion of patients present with resistance, complicating the local control of tumors [22][23][24]. Recent evidence has implicated NETs in playing a functional role in such radioresistance, supporting NET inhibition as a modality for restoring treatment sensitivity [25]. Shinde-Jadhav et al. [25] reported radiation-induced NETosis as a mechanism of radioresistance in murine models of muscle invasive bladder cancer. The researchers found that tumor irradiation induced the elaboration of NETs, which in turn played a functional role in radiotherapy resistance [25]. Inhibiting NETosis or NET degradation through neutrophil elastase inhibitor (NEi) or DNase 1 respectively led to sensitization to radiation therapy, highlighting the use of these agents as modalities to mitigate radiation therapy resistance [25]. Importantly, the researchers demonstrated clinical relevance, reporting that a higher proportion of patients who responded poorly to radiation therapy had NETs in their tumors, and such deposition was associated with poorer overall survival, independent of other confounders [25]. NETs thus seem to have a pivotal influence on radiation therapy resistance [25]. Further clinical exploration of novel combinatorial regimens involving NETosis inhibition or NET degradation could potentially improve therapeutic response.

The evidence presented thus far highlights that NETs likely contribute to resistance to a variety of gold-standard and emerging cancer therapies. While a functional role for NETs in chemo-, immuno-, and radiation therapy has been reported, further elaborating the involvement of NET components in such resistance could allow for novel methods of therapeutic targeting [2][20][25]. While there are many NET components, five have been well-described within the context of cancer therapy resistance. NE, MMP-9, and CG decorate NETs and have been studied in treatment resistance [26]. Additionally, other factors, such as PD-(L)1 and carcinoembryonic antigen cell adhesion molecule 1 (CEACAM1), have been explored in the context of NET-dependent immunotherapy resistance.

NE is a serine protease that is found in azurophilic granules and potentiates the microbicidal activity of neutrophils [26][27][28]. NE is released into the extracellular space during degranulation and NETosis [26][29][27][30][28]. NE is implicated in various physiological and pathological events, including inflammation, ECM degradation and the progression of cancer [26][27]. The pro-tumorigenic properties of NE have increased interest regarding its influence on the response to therapy [26][27].
Pre-clinical and clinical evidence suggests NE could promote systemic treatment resistance through inducing the epithelial-to-mesenchymal transition (EMT) [31][32][33]. EMT is a well-recognized hallmark of cancer, characterized by a biochemical cascade that promotes metastasis [33][34][35][36]. The cell changes to a mesenchymal phenotype with greater migratory and antiapoptotic capacity [33][34][35][36][37][38][39]. Thus, EMT promotes enhanced malignancy and resistance to chemo- and immunotherapies [33]. The association between EMT and such systemic therapy resistance has been described across tumor sub-types, but largely without reference to NETs [33][40][41][42][43][44][45][46]. With that said, evidence has emerged supporting neutrophil infiltration in the TME as a driver of EMT through NE-activity [27][28][47][48][49][50]. The relevance of NE to EMT and associated treatment resistance is particularly striking considering recent evidence on the role of NETs in EMT [31][32]. Various groups have reported that NETs enhanced the migratory ability of cancer cells and upregulated various EMT markers [31][32]. Such effects were abrogated with DNAse-1 treatment, suggesting that NETs play a functional role in promoting EMT, perhaps through NE activity [31][32]. A NET-dependent, NE-mediated EMT pathway of resistance could be pharmacologically targeted to restore treatment sensitivity, yet this hypothesis remains to be further explored.

Matrix metalloproteinases are a family of endopeptidases that can degrade various components of the tumor microenvironment [51]. MMP-9 is a neutrophil-derived protein that is known to facilitate cancer progression through extracellular matrix (ECM) degradation [52][51][53][54][55][56]. Furthermore, recent evidence has elaborated MMP-9-associated chemoresistance [57][58]. Gao et al. [57] conducted immunohistochemical staining of cancerous and healthy tissue samples obtained from advanced primary gastric cancer patients and found that the positive expression of MMP-9 and associated ECM degradation and angiogenesis markers were associated with poor response to chemotherapy. Yang et al. [58] corroborated this finding by showing that MMP-9 inhibition improved the response of colorectal cancer cells to chemotherapy in vitro. Although functional data examining MMP-9 in the context of therapeutic resistance is scant, emerging clinical data associates elevated MMP-9 and poor response to systemic treatment.
Moreover, existing evidence implicates neutrophil-derived MMP-9 in therapeutic resistance. One such mechanism is angiogenesis, which is known to complicate cancer therapeutic management since the formation of abnormal tumor vascular network inhibits the diffusion of chemotherapeutic agents [59][60][61]. Hawinkels et al. [54] studied neutrophil MMP-9-mediated colorectal cancer angiogenesis, analyzing plasma and tissue samples from patients undergoing resection for primary colorectal cancer. The researchers reported elevated leukocyte-derived MMP-9 in the tumors of these patients, which was correlated with the expression of various markers of angiogenesis [54]. Their research thus corroborates that TANs are a major source of MMP-9 and key promoters of angiogenesis, which is intriguing given the well-established association between angiogenesis and systemic therapy resistance (Figure 1) [62][54][55][63][64]. With all of this said, the current data on neutrophil MMP-9 in treatment resistance is promising, but further research is needed to elaborate a functional role and evaluate therapeutic targeting. 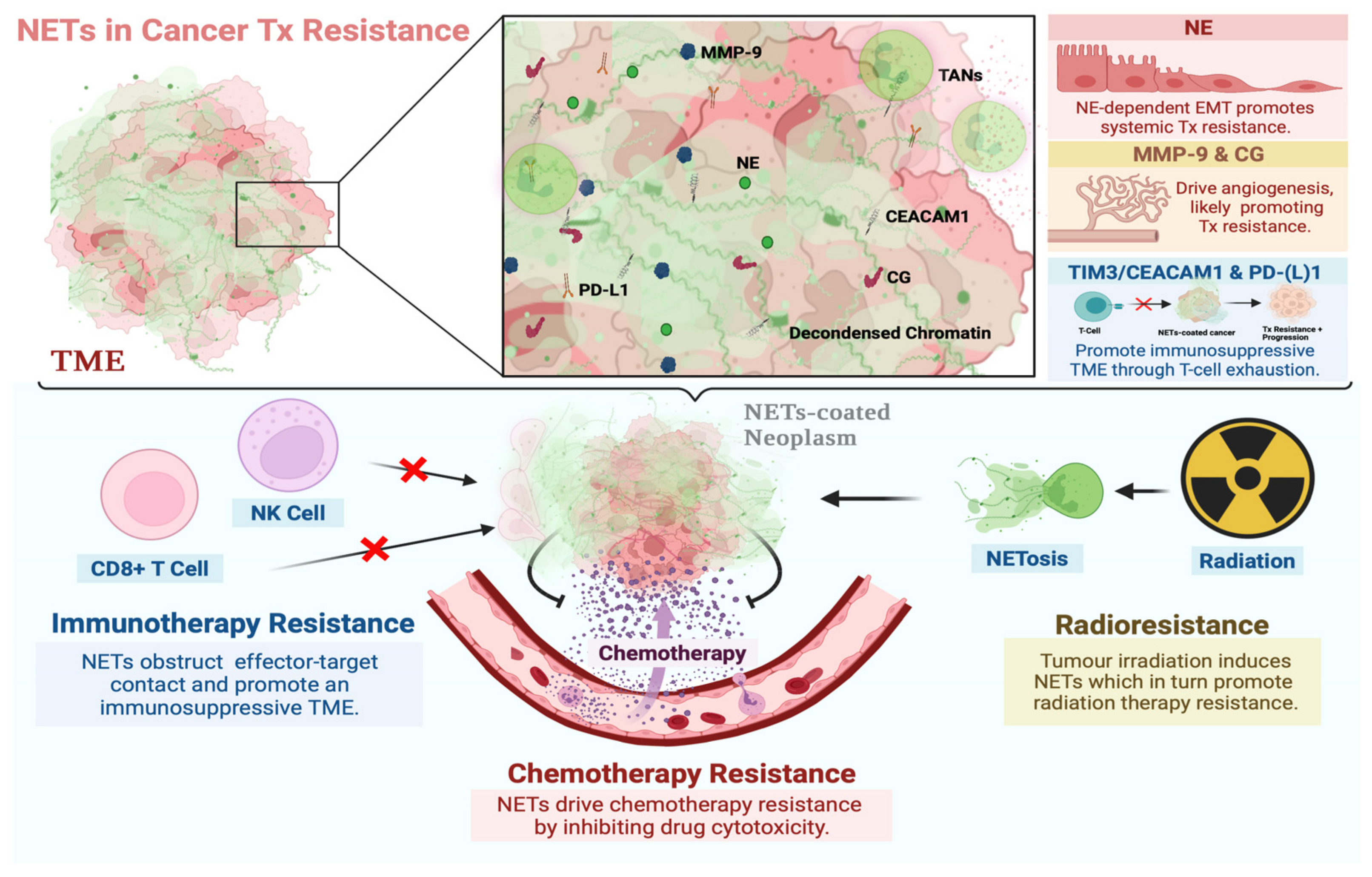 Figure 1. Involvement of NETs in resistance to systemic and local cancer therapies. NETs are DNA webs extruded by neutrophils and associated with NE, MMP-9, CG, CEACAM1, and PD-L1 proteins, among others. These proteins are known to drive mechanisms associated with neoplastic resistance to systemic and local therapies. NETs may promote a microenvironment that favors the development of such a phenotype by sequestering tumor cells, bringing them into contact with these proteins, and driving multiple mechanisms of resistance concurrently. The functional role of NETs in resistance to chemo-, immuno-, and radiation therapy has been reported [61][65][66][67][68]. Proposed mechanisms thereof include NETs coating neoplasms and preventing contact with cytotoxic immune cells, T-cell exhaustion through CEACAM1/TIM-3 interactions and the PD-1/PD-L1 axis, drug detoxification, angiogenesis through CG and MMP-9 activity, and NE-dependent EMT, among others. Created with BioRender.com (accessed on 28 January 2022).

In a recent study, group identified CEACAM1 as a NET-associated protein responsible for enhanced metastatic potential [73]. CEACAM1 is a transmembrane glycoprotein belonging to the carcinoembryonic antigen (CEA) family of proteins, which are known to play functional roles in cancer progression and neutrophil activation [73][74][75]. Here showed that CEACAM1, which is known to decorate NETs, facilitates pro-metastatic NET-dependent interactions, enhancing colon carcinoma cell adhesion and migration in vitro and in vivo [73]. The data thus established a functional role for NET-associated CEACAM1 in cancer, leading to renewed interest over its potential influence on response to therapy as well [73].
A growing number of pre-clinical and clinical studies have in turn associated CEACAM1 with resistance to systemic therapy [74][75][76][77][78][79]. Ortenberg et al. [77] conducted a longitudinal retrospective study to evaluate association between serum CEACAM1 expression and response to immunotherapy in progressive melanoma patients, reporting that the protein was elevated over time in poor responders. Additionally, Huang et al. [76] elaborated the mechanistic underpinnings of CEACAM1-associated immunotherapy resistance, finding that the protein regulates T-cell exhaustion through interactions with T-cell immunoglobulin domain and mucin domain-3 (TIM-3). T cell exhaustion is a dysfunctional phenotype that is characterized by attenuated effector activity against cancer cells, allowing for tumor progression [65]. TIM-3 and CEACAM1 co-expression was thus associated with an immunosuppressive TME conducive to cancer progression and therapy resistance [76]. These results were later corroborated in clinical cohorts of colorectal and head and neck cancer patients underscoring the clinical relevance of this work [78][79]. With that said, it stands to reason that therapeutically targeting NETs in conjunction with CEACAM1 could potentially restore sensitivity to immunotherapy, but this hypothesis remains to be tested.

More
© Text is available under the terms and conditions of the Creative Commons Attribution (CC BY) license; additional terms may apply. By using this site, you agree to the Terms and Conditions and Privacy Policy.
Upload a video for this entry
Information
Subjects: Immunology; Oncology
Contributors MDPI registered users' name will be linked to their SciProfiles pages. To register with us, please refer to https://encyclopedia.pub/register :
Muhammad Hussain Shahzad
,
Ariane Brassard
View Times: 251
Revisions: 3 times (View History)
Update Date: 26 Apr 2022
Table of Contents
1000/1000
Hot Most Recent