Submitted Successfully!
Thank you for your contribution! You can also upload a video entry related to this topic through the link below:
https://encyclopedia.pub/user/video_add?id=2093
Check Note
2000/2000
Rhenium(I) Tricarbonyl Complexes As Photosensitisers
Edit
Upload a video
This entry is adapted from 10.3390/molecules25184176

Photodynamic therapy (PDT) is emerging as a significant complementary or alternative approach for cancer treatment. Re(I) tricarbonyl complexes is a new generation of metal-based photosensitisers for PDT that are of great interest in multidisciplinary research.

Photodynamic Therapy (PDT) is a treatment modality that uses harmless visible light to activate non-toxic light-excitable molecules (i.e., the photosensitisers), for the generation of cytotoxic reactive oxygen species (ROS, type I photoactivation) and singlet oxygen (type II photoactivation) from molecular oxygen (Figure 1) [1][2][3][4][5][6][7]within or at near vicinity to cancer cells, to cause cell death and tissue necrosis [8]. PDT was claimed to be relatively selective and safe compared to classical anticancer therapies due to the use of harmless therapeutic agents during the process, liberty of activating only the photosensitisers (PSs) at the tumour region via selective exposure of the tumour to light, and increased tendency of the targeted photosensitisers to accumulate at the tumour site [7][9]. PDT can be used repetitively without causing resistance to tumour or hypersensitivity to normal tissue, as a single agent or in conjunction with other anticancer therapies such as chemotherapy and radiotherapy [10][11][12][13][14]. 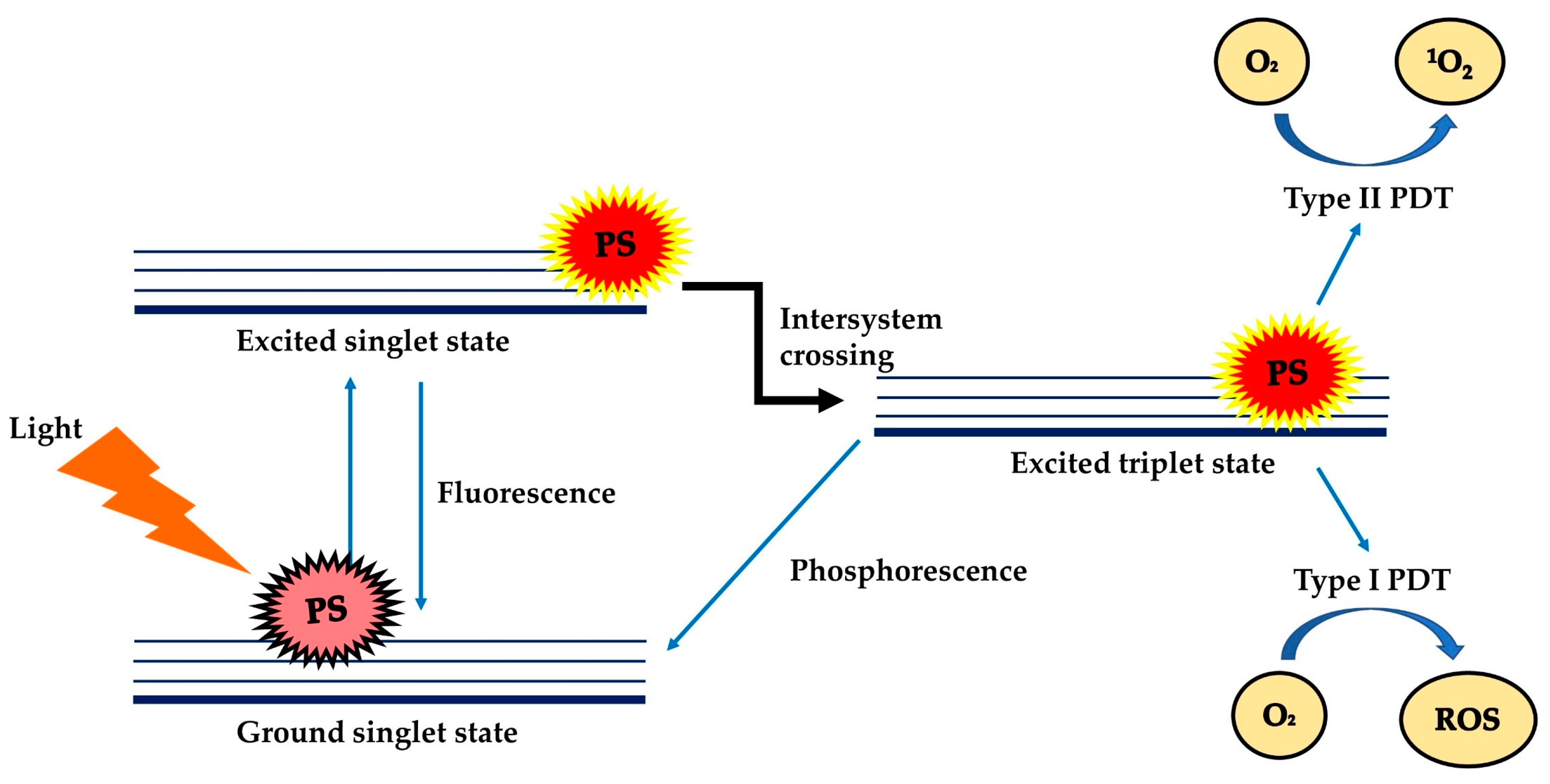 At present, a number of PSs have received approval from the FDA for the treatment of cancer (e.g., skin, pancreatic and other cancers—refer to Table 1) [8]and non-cancer disorders (e.g., verteporfin for age-related macular degeneration treatment and 5-aminolevulinic acid for moderate to severe acne vulgaris) [15]. Despite the advantages, the extensive clinical use of PDT was limited by the inherent weaknesses of common photosensitisers, such as water insolubility, aggregation tendency in the physiological environment, and requirement of a rich oxygen environment for the production of singlet oxygen/ROS [16][17][18]. In recent years, Re(I) complexes have been increasingly explored as a new alternative choice of photosensitisers for PDT [5][19][20]. This review gives a brief account of the development of anticancer PDT and assesses the potential of Re(I) complexes as potent photosensitisers for PDT.

Table 1. Application of clinically approved photosensitisers for treatment of cancer.

Studies done by several research groups including Gasser’s group, Megger’s group, Alex’s group and others have proved that Re(I) tricarbonyl complexes are potential new generation of photosensitisers which may generate free radicals to kill the cancer cells at higher wavelength by tuning of the functional group or ligands attach to it. Structural modifications have been done on the published Re(I) tricarbonyl complexes to improve the photo-absorption profiles and phototoxic activity towards HeLa cells and PC-3 cells. Significant result (difference of 10-20 µM) before and after modification of the structures can be seen in the published data. For example, Gasser et al. further explored the use of a photolabile protecting group (PLPG) to enable the release of Re(I) tricarbonyl complex at low irradiation energy (1.2 J cm−2). Such strategy in combining targeting with peptides and irradiation-dependent release of the PLPG-Re complexes further increased the phototoxicity of these compounds against cancer cells (HeLa and PC-3, IC50: 9.3 µM) while, at the same time, reduced the phototoxic effects towards non-cancerous cells (MRC-5, IC50: 20.5 µM) [5][20][35][36].

Re(CO)3 complexes is an attractive candidate for further investigation in the effort to discover new and effective photosensitisers for PDT. The introduction of more ring structures or fluorine or methyl groups as displayed by reported complexes will be the structural strategy to improve lipophilicity and phototoxic effect of new Re(I) tricarbonyl complexes. Moreover, Re(I) complexes can be included in formulations with various nanoparticles such as liposomes, liquid crystalline nanoparticles or micelles to enhance its solubility and delivery to the cancer cells. This class of compounds can also be paired with synergistic agents like current chemotherapeutic agents to improve cellular targeting effect and treatment outcomes. Advancement in combination therapies discovery may unlock a new platform to strengthen the antitumor effects and enhance clinical outcomes. From our review, only a few Re(I) complexes advanced into the in vivo or clinical phase [37][38][39]. The available in vivo studies mainly focused on Re(I) tricarbonyl complexes tested on the cytotoxic activity but not on PDT. This might be due to the short UV wavelength required for excitation. With the emergence of two-photon laser technology, Re(I) complex can be further investigated to result in a deeper tissue penetration through photoactivation with two times higher wavelength. Besides, the Re(I) complex may also be studied further in photothermal therapy to improve its anticancer activity through heat energy. As Re(I) complexes have been most frequently studied in cell culture, more preclinical and clinical studies are expected to be carried out in the future.

The development of Re(I) tricarbonyl complexes has unlocked a new avenue for the treatment of cancer via photodynamic therapy to improve the overall survival rate of cancer patients. To achieve this, researchers and clinicians have to improvise their understandings of tumour immunology, novel complexes, and optimise the timing of photodynamic therapy. We believed that these novel complexes represent a promising alternative in all types of cancer, thus progressing from bench to bedside at a swift pace. Re(I) complexes as photosensitisers in photodynamic therapy will bring a bright future ahead for patients suffering from this aggressive and challenging killer.

More
© Text is available under the terms and conditions of the Creative Commons Attribution (CC BY) license; additional terms may apply. By using this site, you agree to the Terms and Conditions and Privacy Policy.
Upload a video for this entry
Information
Subjects: Oncology ; Chemistry, Medicinal ; Chemistry, Inorganic & Nuclear
Contributors MDPI registered users' name will be linked to their SciProfiles pages. To register with us, please refer to https://encyclopedia.pub/register :
May Lee Low
,
Liew Hui Shan
View Times: 329
Revisions: 4 times (View History)
Update Time: 27 Oct 2020
Table of Contents
1000/1000
Hot Most Recent