+1 point
Thank you for your contribution! You can also upload a video entry related to this topic through the link below: https://encyclopedia.pub/user/video_add?id=20789
Check Note
2000/2000
Poly (Butylene Succinate) and PBS Copolyesters Degradation

The impact of plastics on the environment can be mitigated by employing biobased and/or biodegradable materials (i.e., bioplastics) instead of the traditional “commodities”. Poly (butylene succinate) (PBS) emerges as one of the most promising alternatives due to its good mechanical, thermal, and barrier properties, making it suitable for use in a wide range of applications. Nevertheless, less information regarding PBS biodegradation is available, as research is still ongoing. PBS degradation methods include hydrolytic degradation, enzymatic degradation, and biodegradation in environmental conditions, such as burial, activated sludge, and compost.

So far, enzymatic degradation is regarded as one of the most attractive and effective methods for the biodegradation of biopolyesters. The main reason is the presence of labile ester bonds in the chemical structures of biopolyesters, where enzymes can attack [7]. Then, the enzymatic degradation process usually starts with the attachment of the enzyme on the surface, and hydrolysis proceeds via surface erosion. Among all the different types and families of enzymes that can effectively biodegrade PBS and its copolymers. Table 1 shows various enzymes and different experimental conditions for PBS enzymatic biodegradation.
Table 1. Classification of enzymes by families for different PBS enzymatic degradation studies.
Enzymatic degradation assays for biopolyesters and PBS are commonly carried out at physiological temperature (i.e., 37 °C) [6][10][13]. However, it has been demonstrated that this degradation method is favored at a temperature close to Tm (the PBS melting temperature is above 100 °C) [20]. Some researchers have reported low weight loss values for PBS homopolymer at different experimental conditions, reaching a 3.5% weight loss after 12 days in the presence of Pseudomonas cepacia lipase [20], or even lower [12][14]. The low degree of degradation obtained could be attributed to the high crystallinity of this polymer compared to other aliphatic polyesters [20]. Other studies carried out under different experimental conditions report much higher degradation rates. For example, for enzymatic degradation assays employing cutinases, weight losses reach almost 100% in just 12 h [10], as seen in Table 1. An interesting study developed by Shi et al. showed the influence of two different enzymes (Fusarium solani cutinase and Candida antarctica lipase B, CALB) in the degradation rate of PBS. They found that the PBS degradation rate was much faster by the action of cutinase. PBS degraded in the presence of cutinase reached ~50% weight loss in 4 h, whereas those degraded in the presence of lipase reached ~20% weight loss over the same time. For both cases, a nearly total decomposition was achieved after 26 h [11].
Figure 1 shows the results corresponding to different biodegradation studies where the weight loss (%) of PBS in the presence of lipase from Pseudomonas cepacia has been reported. As can be observed in Figure 1, only one study shows a relatively high weight loss of PBS with this enzyme (higher than 40% in 100 h) [17]. For the rest, the weight loss reached after several hours in contact with Pseudomonas cepacia is very low (less than 6%), which could be attributed, in part, to the low concentration of the enzyme employed for some of the studies [13][15][18]. 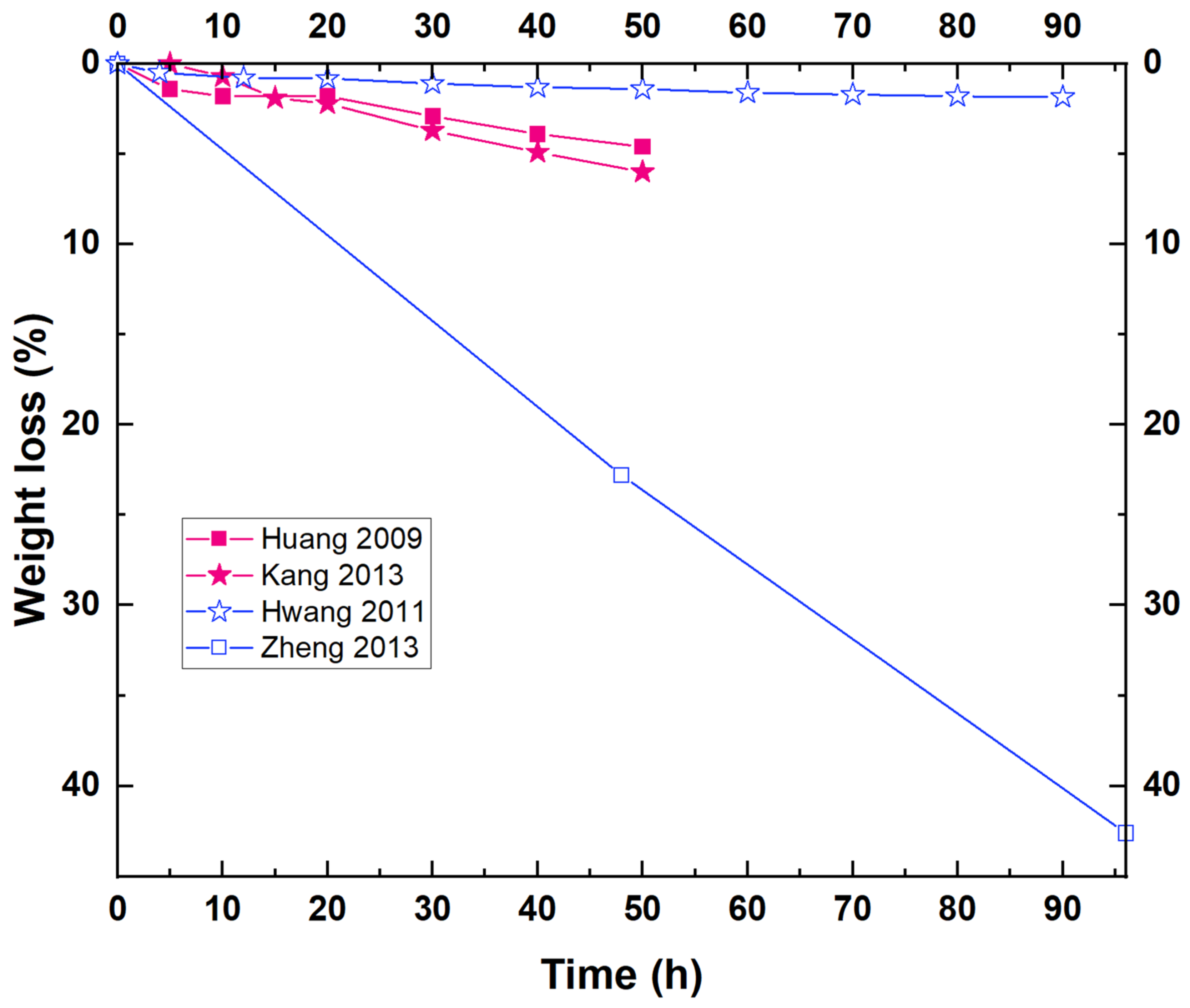 Figure 1. Weight loss curves corresponding to various enzymatic degradation studies of PBS by the action of a lipase from Pseudomonas cepacia. Experimental conditions differ from one study to another, although the same enzyme is used.

Although enzymatic hydrolysis (laboratory conditions) has shown satisfactory results for PBS biodegradation, this biopolyester commonly degrades in environmental conditions [24]. The study of the biodegradation of PBS under environmental conditions will give an idea for the implementation of PBS in agricultural applications such as mulching films [25][26][27]. PE films are commonly employed, being an effective method for promoting plant growth during the cold seasons (i.e., spring and autumn). The problem here is the recyclability of the PE film due to the contamination caused to the soil itself, so a biodegradable film is required, and PBS is a suitable candidate to solve this issue [28].
The experiments for this type of biodegradation are usually carried out following different standards from international organizations (ISO, ASTM, and EU). Because of this, the definition of more experimental parameters is required as compared to enzymatic and hydrolytic assays. As the conditions and parameters differ from one study to another (as well as the soil employed for the tests and the microorganisms content in the soil), biodegradation in environmental conditions covers a wide range of variable results [29].

The presence of fillers in PBS biocomposites has been widely studied to modulate the degradation in environmental conditions, as in the case of other types of degradation and thermomechanical and barrier properties. Special cases are natural fillers, that, in addition to being easily biodegraded, can potentially increase the degradation rate of PBS. Table 2 includes several examples of biodegradation studies carried out under environmental conditions for different PBS-based biocomposites. Among all the examples presented in the table, some interesting results will be commented on below. As a general idea to consider, the trend shows that PBS-based biocomposites degrade faster than neat PBS.
Table 2. Different biodegradation studies of PBS and PBS biocomposites carried out in environmental conditions.
Although the experimental conditions differ from one study to another, it has been observed that cellulose fillers (micro- or nano-sized) achieve one of the best results for PBS degradation. Platnieks et al. have studied many different PBS/cellulose-based composite films: microcrystalline cellulose (MCC) [36], nanofibrillated cellulose (NFC) [14][23], and recycled cellulose from TetraPak® [44]. The experimental conditions were similar for all the studies, employing a simulated compost under aerobic conditions at 58 °C, with a slightly acidic medium (pH = 5.7–6.5) and a water content of 50% or higher. The researchers found that, although almost every sample was completely disintegrated within 75–80 days, PBS-biocomposites degraded 5–10 days earlier than neat PBS films. In general, the degradation rate was faster at higher filler content. However, for the PBS/rCell biocomposite with the highest content in rCell, the degradation rate was faster in the early stages of the assay, whereas it slowed down during the course of the experiment (see Figure 2a–c). If the results were compared to corresponding to the PBS biocomposites with high filler content (i.e., 40 wt%), it was found that the PBS/MCC composite degraded faster than the other two biocomposites (i.e., PBS/NFC and PBS/rCell) which present a similar behavior, being much faster than the biodegradation of neat PBS (see Figure 2d). 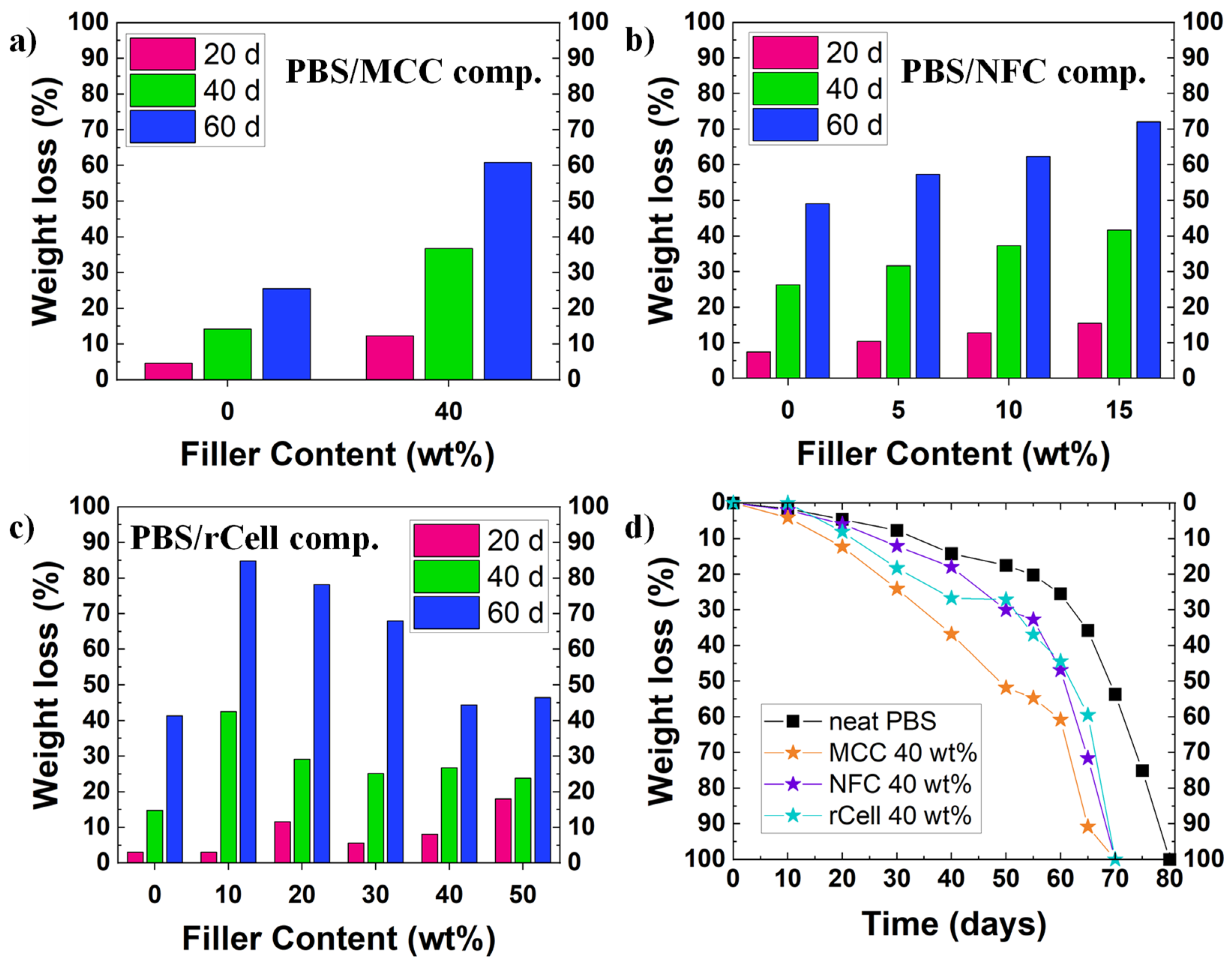 More
©Text is available under the terms and conditions of the Creative Commons-Attribution ShareAlike (CC BY-SA) license; additional terms may apply. By using this site, you agree to the Terms and Conditions and Privacy Policy.
Upload a video for this entry
Information
Subjects: Polymer Science
Contributor MDPI registered users' name will be linked to their SciProfiles pages. To register with us, please refer to https://encyclopedia.pub/register :
Mario Iván Peñas
View Times: 766
Revisions: 2 times (View History)
Update Date: 22 Mar 2022
Table of Contents
1000/1000
Hot Most Recent