+1 point
Thank you for your contribution! You can also upload a video entry related to this topic through the link below: https://encyclopedia.pub/user/video_add?id=20624
Check Note
2000/2000
Two CONSTANS-like 16 Genes

In higher plants, floral transition is the process that describes the switch from the vegetative stage to the reproductive stage. The time for this process is referred to as flowering time. The flowering mechanism of the annual plant species Arabidopsis is thoroughly understood. According to recent research, the onset of flowering is regulated in a timely manner by an intricate network involving a series of regulatory pathways, such as gibberellin, photoperiod, autonomous, aging and vernalization pathways [1][2][3]. Of the many regulatory pathways, the photoperiod pathway is especially important; it is involved in plant responses to photoperiod sensing and subsequent molecular events [4].
Many photoperiod pathway-related genes have been discovered, such as TIME OF CAB EXPRESSION 1 (TOC1), LATE ELONGATED HYPOCOTYL (LHY), EARLY FLOWERING 4 (ELF4), GIGANTEA (GI), CIRCADIAN CLOCK ASSOCIATED 1 (CCA1), FLOWERING LOCUS T (FT) and CONSTANS (CO) [5]. Among them, CO is a key component of which there are orthologs in various plant species [6][7][8][9]. Currently, CYCLING DOF FACTOR (CDF) is known as the only transcription factor that directly binds to the CO promoter and suppresses the expression of CO [10][11][12]. The GI gene plays a key role in the photoperiod induction pathway and positively regulates the expression of the CO gene under long-day conditions [13]. Overexpression of the FLOWERING BHLH (FBH) gene elevates CO levels without being affected by photoperiod [14]. In addition, phytochrome-interacting factors (PIFs) interact with CO to suppress flowering [15]. The E3 ubiquitin ligase-encoding gene HIGH EXPRESSION OF OSMOTICALLY RESPONSIVE GENES1 (HOS1) is involved in controlling the abundance of CO, and CONSTITUTIVE PHOTOMORPHOGENIC1 (COP1), as a flowering repressor, is regulated by cryptochromes (CRY) and promotes the proteolysis of CO in the dark [16][17]. CO genes belong to the BBX family and can be divided into three categories according to their domains in Arabidopsis [7][18]. Group I genes have one CO, CO-like, and TOC1 (CCT) domain and two B-box domains; group II genes have one B-box and one CCT domain; and group III genes have one B-box, one variant B-box and one CCT domain.
However, the functions of CO orthologs vary across different species. In Arabidopsis, overexpression of the AtCO, AtCOL5 and AtCOL16 genes promotes flowering under long-day (LD) or short-day (SD) conditions [19][20], but AtCOL7, AtCOL8 and AtCOL9 inhibit flowering under LD conditions [21][22]. In rice, the OsHd1 gene delays flowering under LD conditions and promotes flowering under SD conditions [23], and OsCOL16 inhibits flowering under both SD and LD conditions [24]. StCO, a CO homolog in potato, regulates flowering [25]. Moreover, the CO orthologs in Fuji apple, MdCOL1 and MdCOL2, play a significant role in the growth and development of reproductive organs [26]. Thus, homologous CO genes have a wide range of effects on plant flowering and development.
Mango (Mangifera indica L.) is a member of the Anacardiaceae family and is an economically important fruit tree species. Flowering time has a considerable influence on the yield and quality of mango. Therefore, the discovery and identification of flowering-related genes are necessary for mango production. Mango flowering is the result of a complex process influenced by many factors, but it is not affected by daylength [27]. Several flowering-related regulatory genes have recently been identified in mango. For example, the MiFT, MiSOC1 and MiAP1 genes promote flowering, but the MiCO gene inhibits flowering in Arabidopsis [28][29][30][31]. However, the COL16 gene has not been studied in mango. 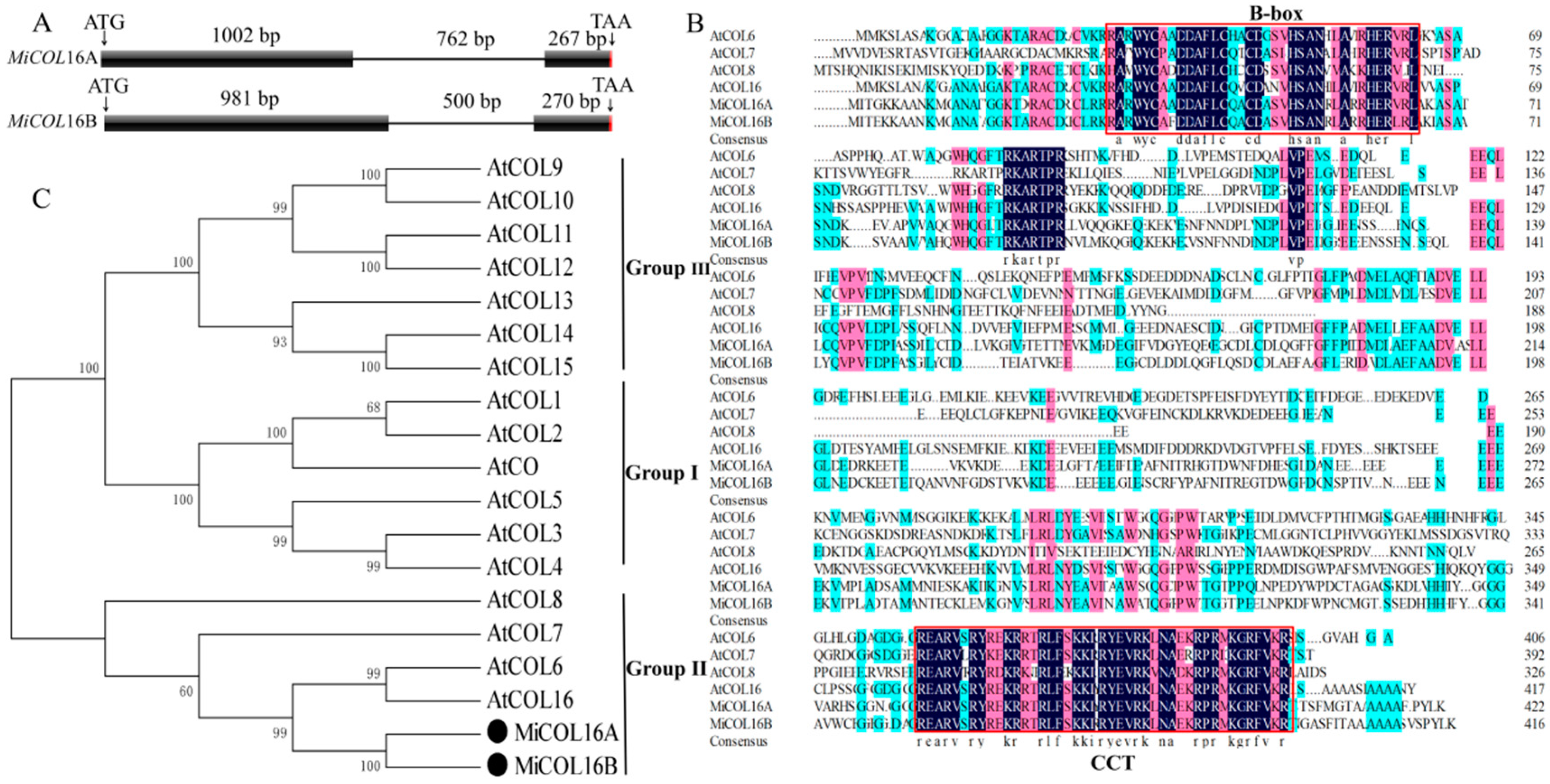 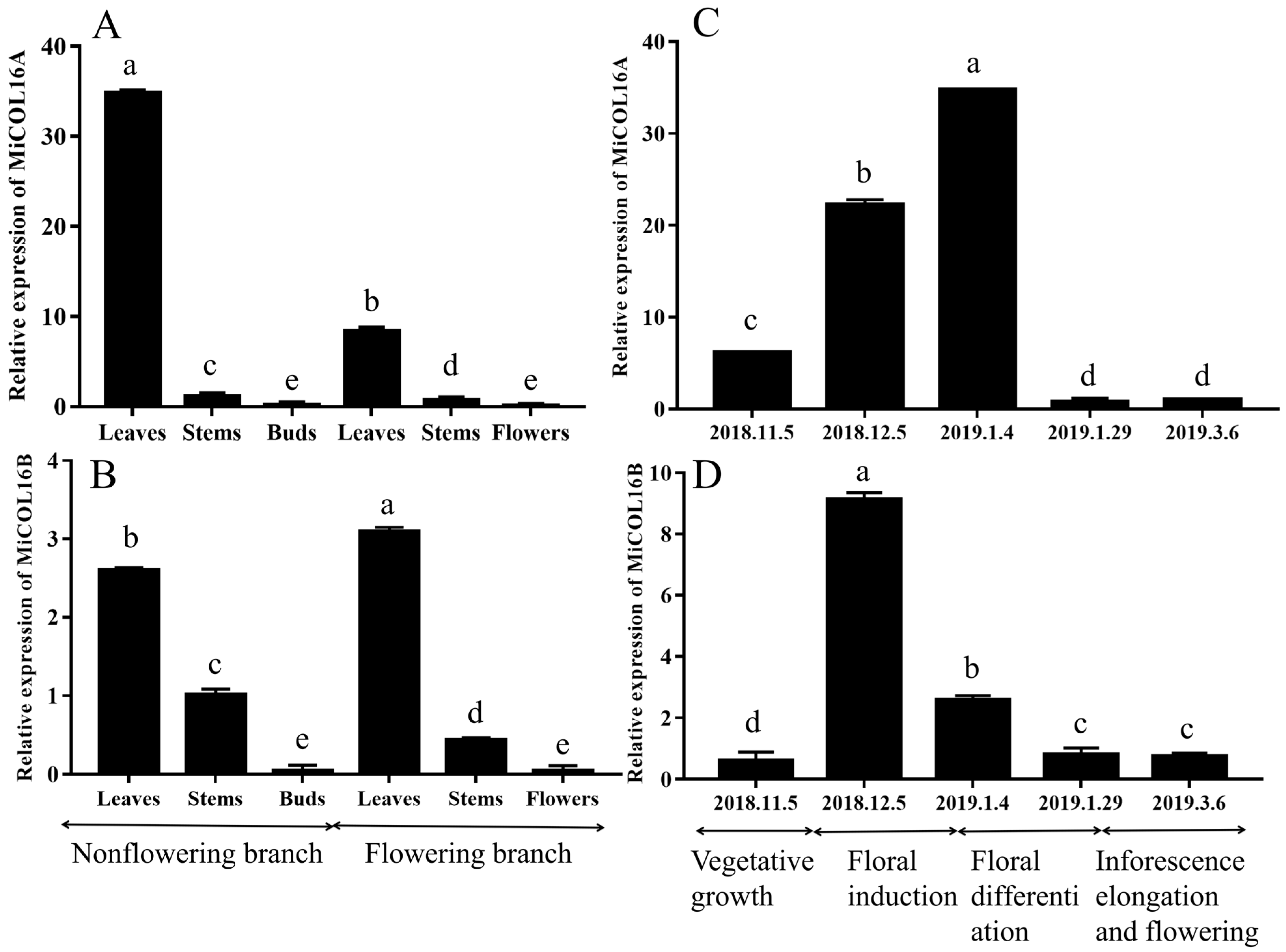 4. Both MiCOL16A and MiCOL16B Are Nuclear Proteins with Transcriptional Activation Activity

MiCOL16A and MiCOL16B protein-linked GFP fusion constructs driven by the CaMV 35S promoter were developed for molecular function assays. The GFP fusion constructs were inserted into vectors, which were transferred into onion inner epidermal cells. Single-strand analysis indicated that free GFP localized to the nucleus and cytomembrane, and both the MiCOL16A and MiCOL16B proteins localized to the nucleus (Figure 4A). 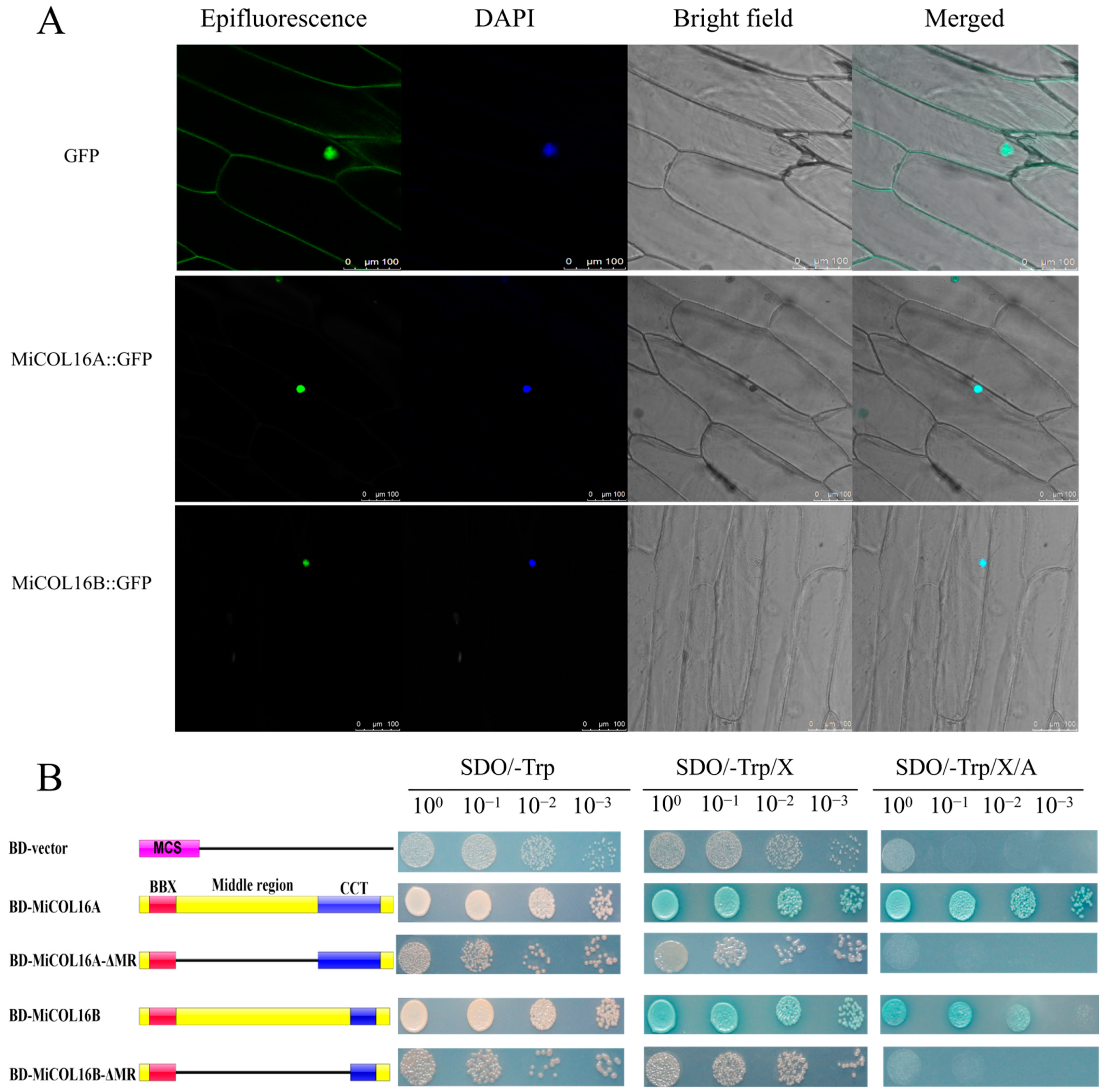 Figure 4. (A) Subcellular localization. Scale bars = 100 µm. (B) Transcriptional activation activity. The left diagram shows various constructs. MCS, multiple cloning sites; BD, GAL4-DNA binding domain; BBX, B-box; CCT, CO, CO-like, TOC1; MR, middle region.
A transcriptional activity assay was performed in yeast cells to demonstrate whether MiCOL16A or MiCOL16B had transcriptional activation activity. According to a previous study, the MR between the B-BOX and CCT domains is required for CO transcriptional activity [24][32][33]. Thus, MiCOL16A, MiCOL16B, MiCOL16A-ΔMR and MiCOL16B-ΔMR were fused into a pGBKT7 vector, and an empty pGBKT7 vector was used as a control. The five different plasmids were transferred into yeast cells, which were then transferred onto different plates. Three days later, all the transformants grew equally well on selective SD/-Trp media. On these three selective media, the BD-MiCOL16A and BD-MiCOL16B transformants grew well and turned blue, but the yeast transformed with the BD-vector, BD-MiCOL16A-ΔMR and BD-MiCOL16B-ΔMR grew only on SD/-Trp/X-α-gal plates and did not turn blue (Figure 4B). Together, α-gal activity could not be detected when the MR region was deleted. These results showed that through their MR domains, MiCOL16A and MiCOL16B have transcriptional activation activity in yeast. 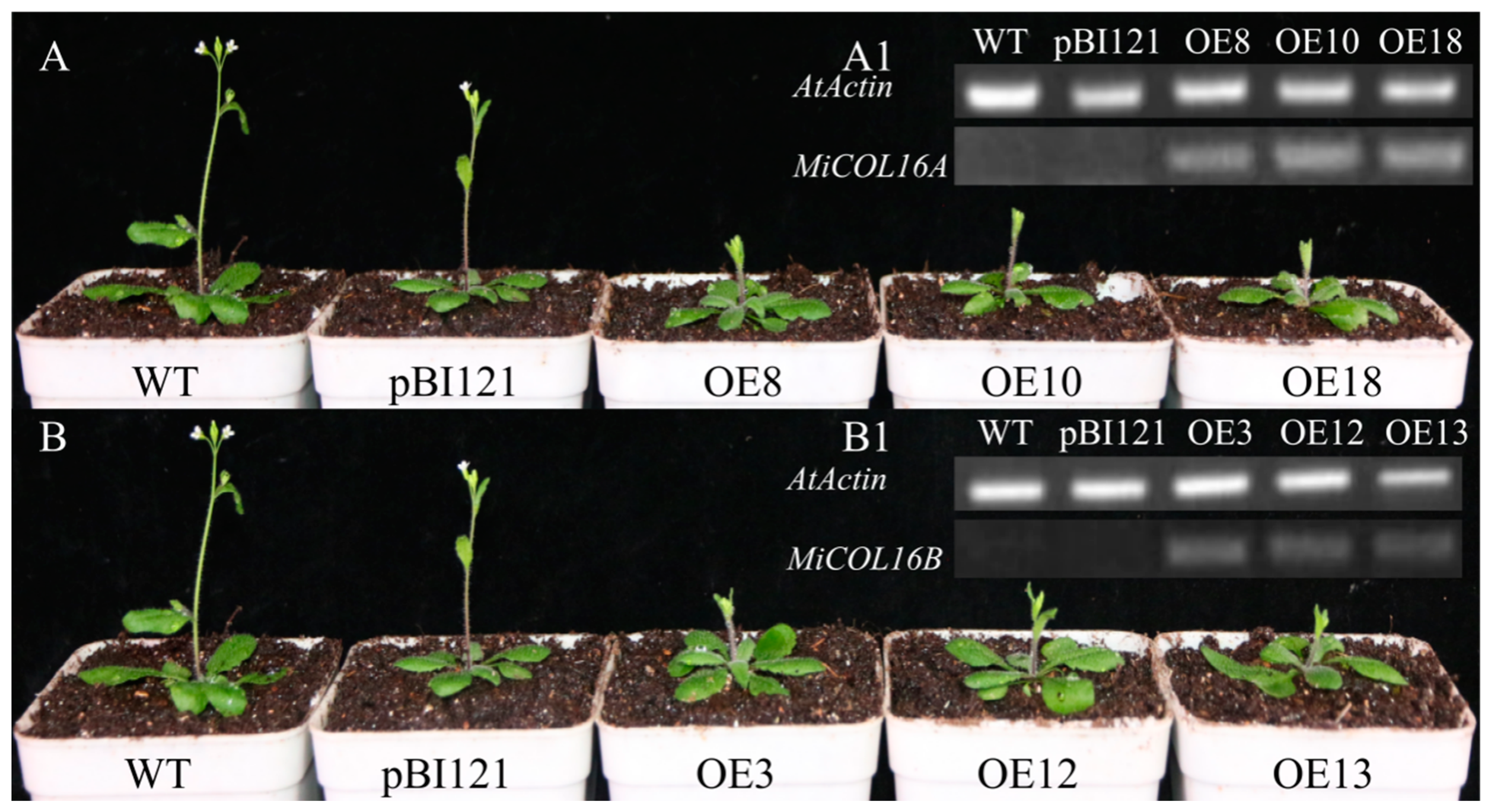 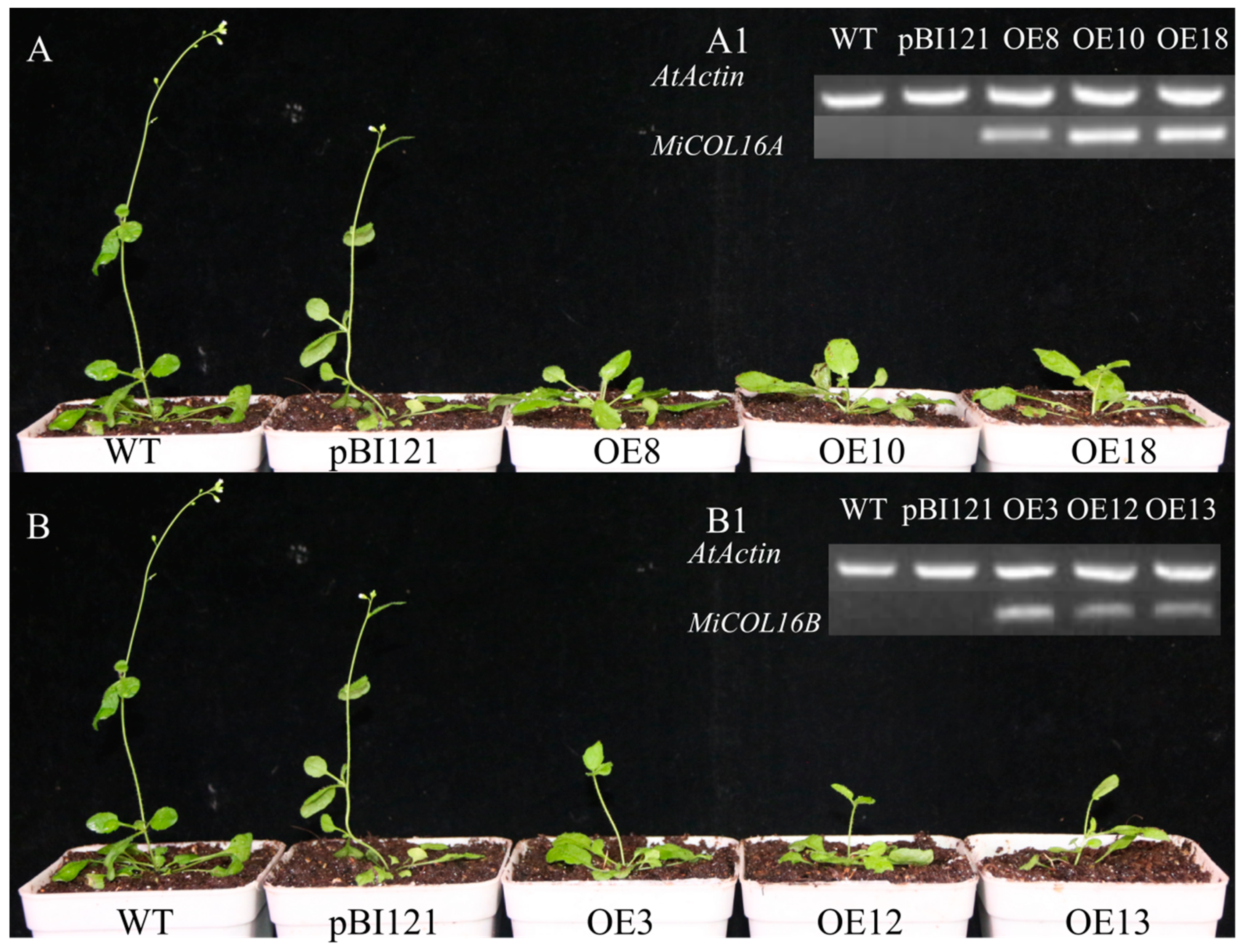 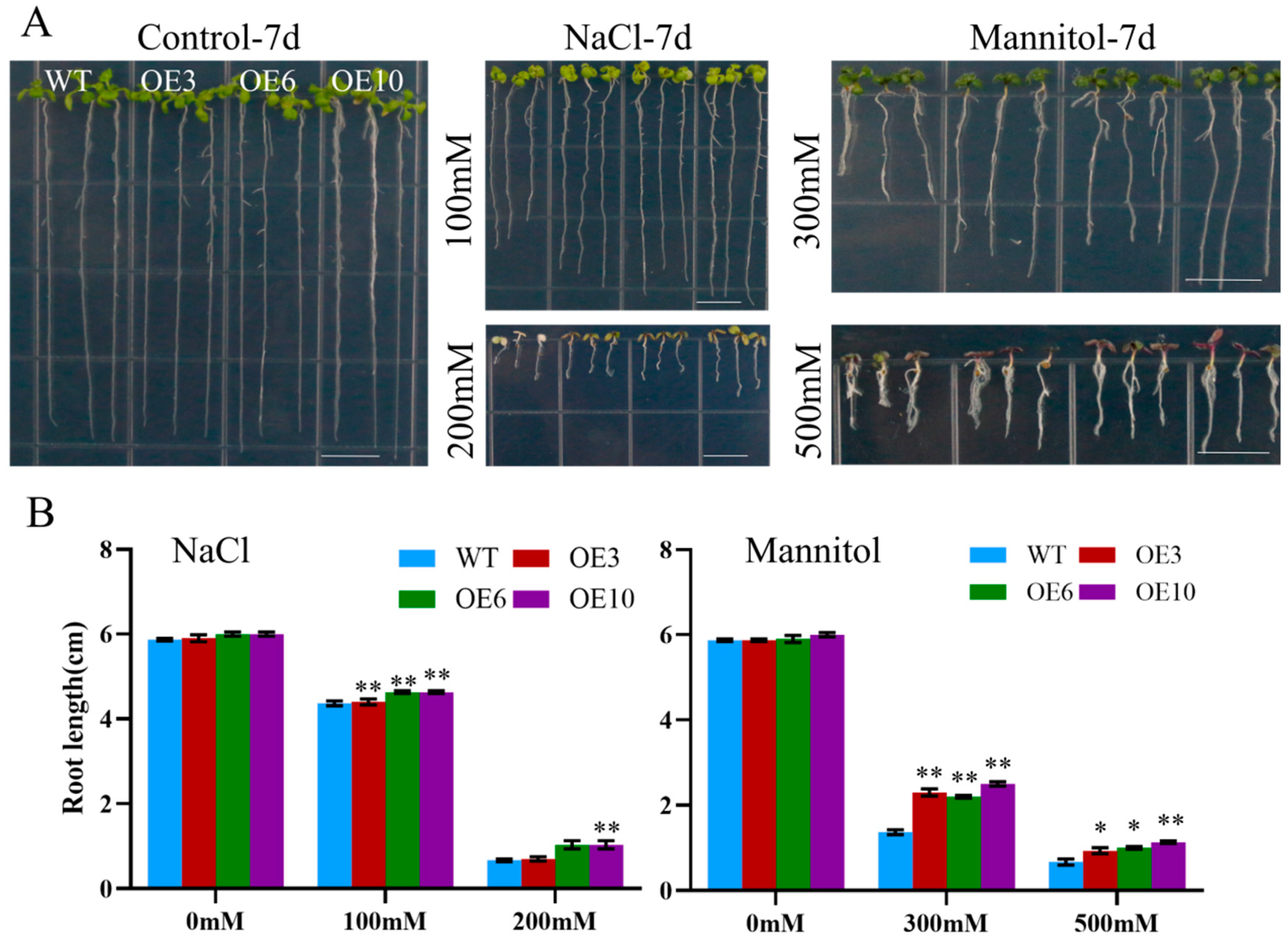 Figure 8. Assays of the length of the primary roots of WT and MiCOL16A transgenic lines under abiotic stress. (A) Seeds of the WT and three transgenic lines grown on half-strength MS media and subjected to various stresses. The bars represent 1.0 cm. (B) Lengths of the roots of all the lines under salt and drought treatment. Significant differences among the samples were assessed at the p < 0.05 (*) and p < 0.01 (**) levels by Student’s t tests. 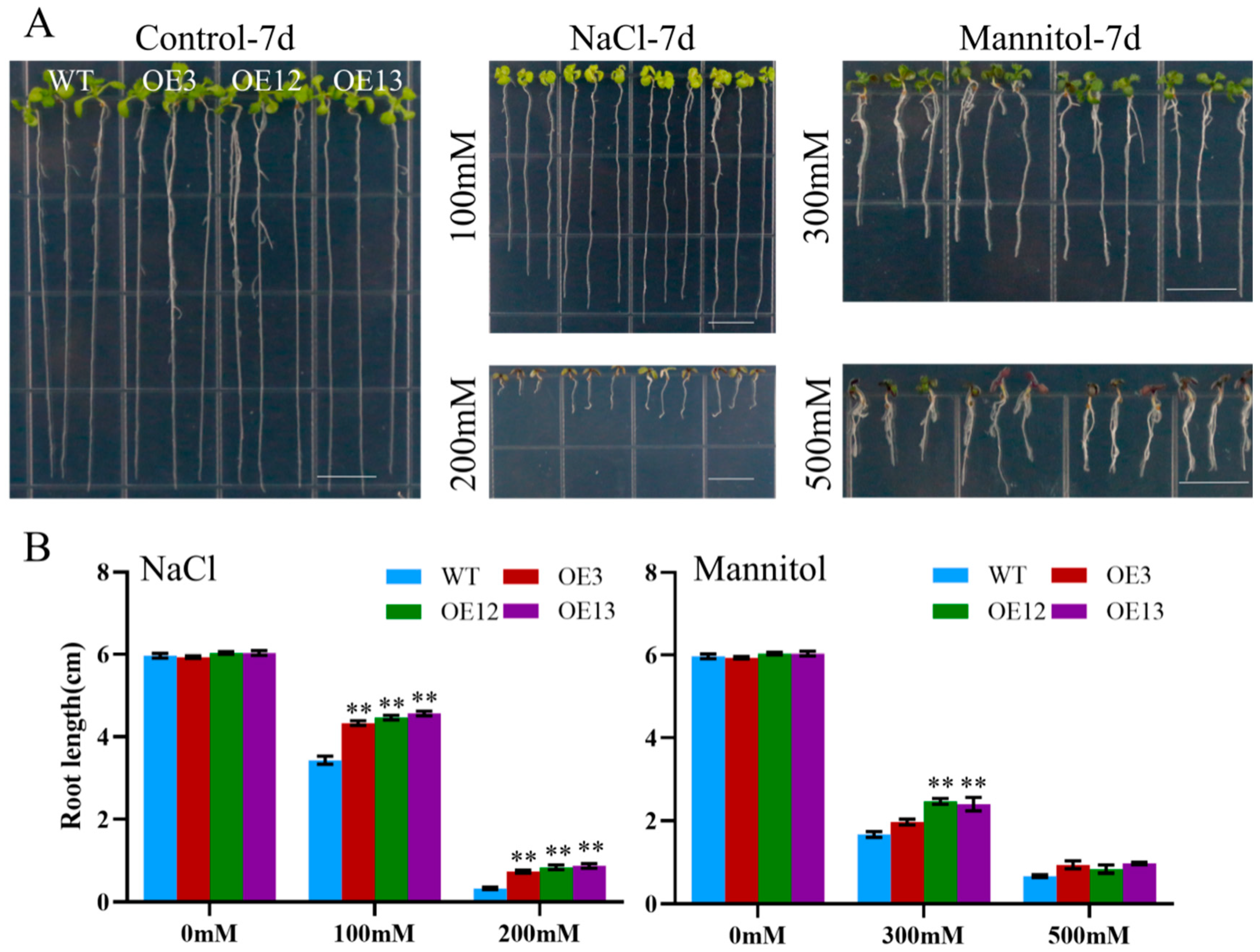 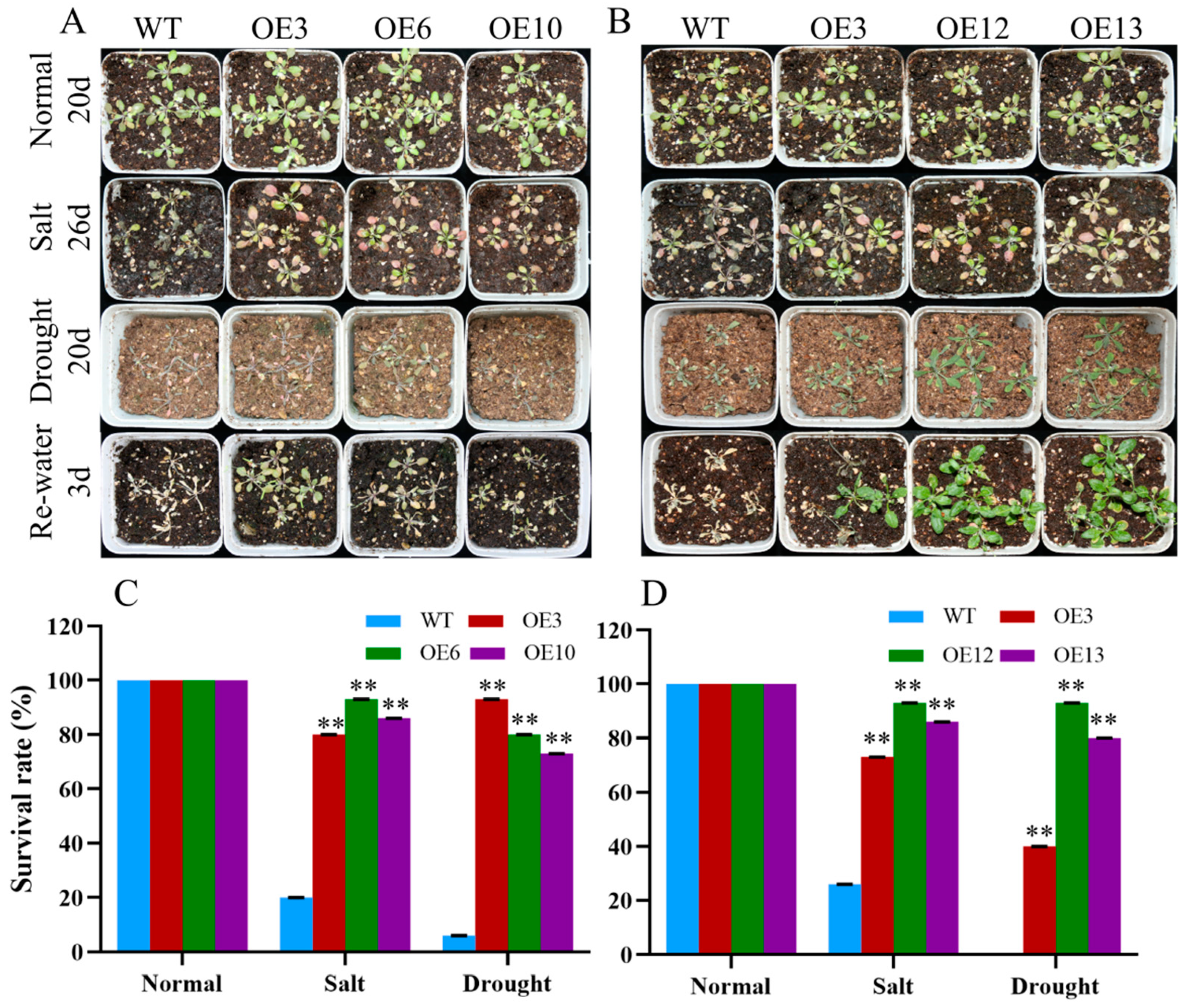 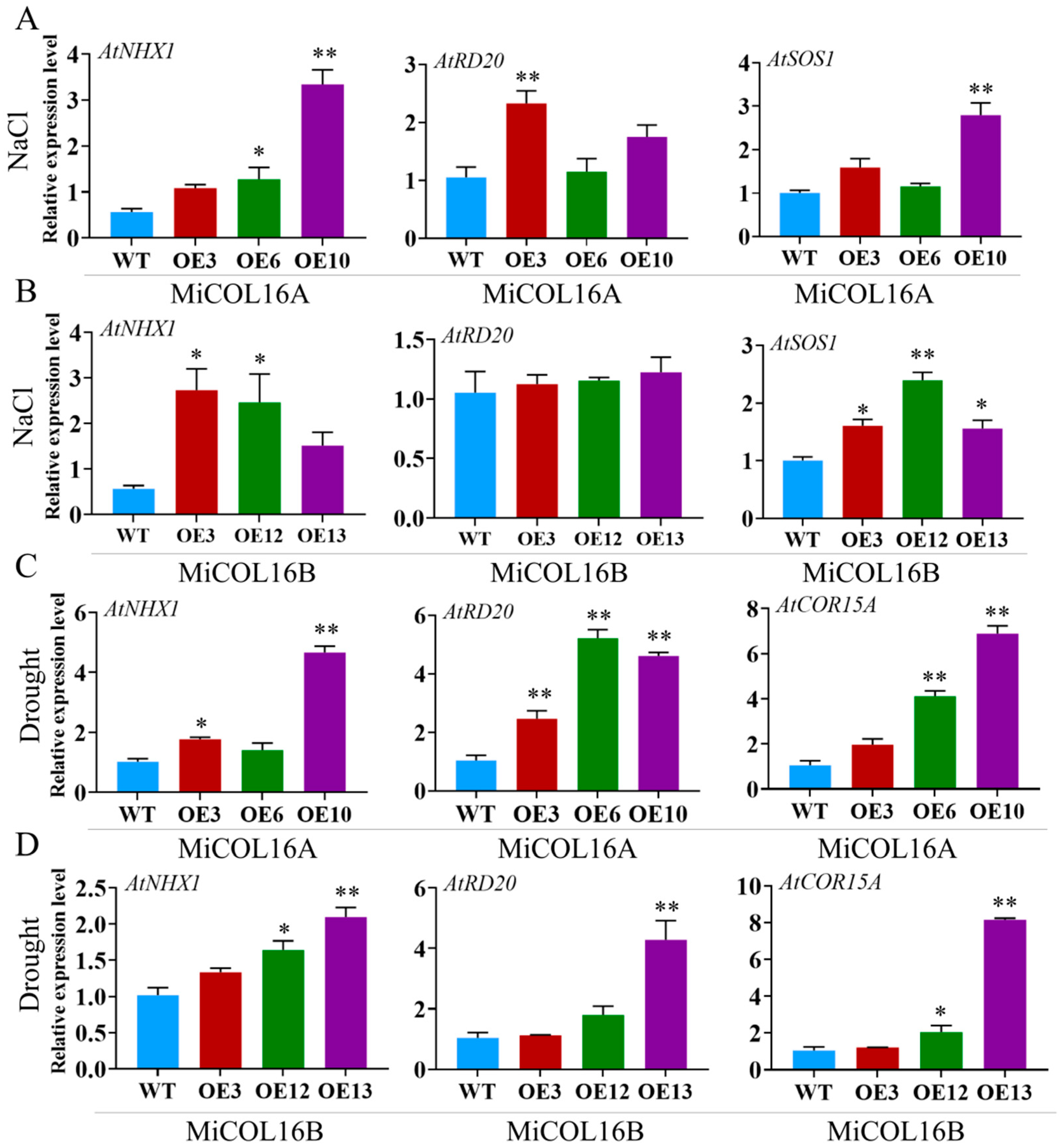 More
© Text is available under the terms and conditions of the Creative Commons Attribution (CC BY) license; additional terms may apply. By using this site, you agree to the Terms and Conditions and Privacy Policy.
Upload a video for this entry
Information
Subjects: Agriculture, Dairy & Animal Science
Contributor MDPI registered users' name will be linked to their SciProfiles pages. To register with us, please refer to https://encyclopedia.pub/register :
Xinhua He
View Times: 178
Revisions: 2 times (View History)
Update Date: 16 Mar 2022
Table of Contents
1000/1000
Hot Most Recent