+1 point
Thank you for your contribution! You can also upload a video entry related to this topic through the link below: https://encyclopedia.pub/user/video_add?id=20596
Check Note
2000/2000
Salicylic Acid and Wheat

Wheat (Triticum aestivum L.) is an important cereal crops worldwide; however, its production is adversely affected by several abiotic stress factors including waterlogging, which causes approximately 15–20% of the yield loss in annual wheat crop production [1]. Waterlogging significantly reduces the diffusion rate of oxygen through the soil, leading to the occurrence of hypoxic or anoxic conditions [2]. To cope with waterlogging-induced oxygen deficient conditions, plants develop several morphological and anatomical adaptive responses such as the formation of adventitious roots and root aerenchyma that improve oxygen availability to the roots [3]. Waterlogging induced development of adventitious roots in upland cereal crops such as wheat is often associated with the formation of aerenchyma [4][5].

Salicylic acid is one of the plant hormones that influences several plant physiological processes and mediates plant responses to a number of biotic and abiotic stresses [6][7]. With respect to abiotic stresses, SA plays an important role in mitigating the adverse effects of drought, cold, heat and salinity in many plant species including wheat [6][8]. Studies on Arabidopsis and mung bean have demonstrated the role of SA in the formation of adventitious roots under normal growing conditions [9][10][11]. For example, SA-deficient mutants of Arabidopsis eds5-1 and eds5-2 exhibit significantly reduced number of adventitious roots as compared to the corresponding wild type plants [11]. Further studies on mung bean revealed that induction of adventitious root formation by salicylic acid is closely associated with H2O2 accumulation. Consistently, treatment of mung bean hypocotyls with H2O2 scavenger/H2O2 biosynthesis inhibitor leads to inhibition of the SA-induced adventitious root formation [9][10]. In wheat, exogenous application of SA and its synthetic derivative, acetyl SA, has also been shown to have positive effects on several morphological traits in the shoot system including plant height, number of tillers, flag leaf area, number of spikes per plant, and number of grains per spike [12][13].

Plant hormones such as ethylene and auxin play important roles in mediating plant adaptation to waterlogging/oxygen deficient conditions [4][14][15][16][17]. The observation of root morphological changes in response to waterlogging including enhanced formation of axile roots, and inhibition of axile root elongation and lateral roots emergence is consistent with previous reports [4][16][17][18]. The association of these alterations in root morphological traits due to waterlogging with upregulation of specific root SA biosynthesis genes and induction of root SA content implies the significance of SA in forming a shallow root system and thereby tolerance to waterlogging conditions. However, as compared to the corresponding non-waterlogged plants, lower root SA level was evident in plants waterlogged for 1 and 7 days. Given that waterlogging induces accumulation of ethylene [17], which has been reported to suppress SA biosynthesis [19], the observed decrease in SA level might imply the responsiveness of SA biosynthesis to ethylene during the initial phases of waterlogging.

It has been shown previously that exogenous SA induces the development of adventitious roots in several plant species grown under normal or aerated conditions [9][10]. This effect of SA is reported to be associated with the activation of the de novo synthesis of auxin, which is known to play critical role in the formation of adventitious roots [20], and its rootward transport, and the repression of its shootward and non-polar transport in the root tips [21]. Consistent with these results, exogenous SA promoted the formation of axile roots in our non-waterlogged wheat plants. However, the induction of axile root formation in non-waterlogged plants was also prevalent in response to inhibition of SA synthesis, implying that the development of such roots is not entirely dependent on SA. The reduction of axile root length in the non-waterlogged wheat plants by SA along with its induction via inhibition of ethylene synthesis in the SA treated plants indicates the significance of ethylene in controlling the elongation of axile root cells. Consistently, ethylene has been shown to inhibit root growth in Arabidopsis plants grown under aerated condition through repressing cell elongation, which is mediated by its effect on local auxin biosynthesis and transport [22]. The observation of further induction in the formation of axile roots and reduction of root elongation in waterlogged plants due to exogenous SA indicates the importance of SA in promoting these root morphological traits and enhance adaptation to waterlogging. This result is in agreement with a previous report that showed the presence of higher SA level and development of more adventitious roots in waterlogging tolerant than waterlogging sensitive soybean lines grown under waterlogged condition [23]. Furthermore, exogenous SA has been shown to inhibit primary root elongation and lateral root formation but enhance adventitious root development, leading to the formation of a shallow root system in Arabidopsis [21]. The role of SA in suppressing primary root elongation and lateral root organogenesis has been reported to be associated with its negative effect on auxin transport through inhibiting protein phosphatase 2A, which regulates the activity of PIN auxin efflux carriers [24].

The prevalence of enhanced aerenchyma formation in the roots of both waterlogged and non-waterlogged wheat plants in response to exogenous SA, although its effect was more pronounced in waterlogged plants, indicates the role of SA in inducing this anatomical adaptive trait. Aerenchyma development, which facilitates oxygen transport and availability in waterlogged roots, is controlled mainly by ethylene [17][26]. Although the formation of aerenchyma in dry land plant species is uncommon under well-drained/aerated soil conditions, previous studies have reported that exogenous ethylene can promote the development of this anatomical trait in the roots of such plant species including wheat and maize when grown under aerated conditions [17][27]. Therefore, the repression of SA-induced aerenchyma formation in both non-waterlogged and waterlogged plants due to inhibition of ethylene synthesis suggests that the induction of aerenchyma development by SA is dependent at least partly on ethylene. In agreement with this, enhancement of aerenchyma formation in waterlogging tolerant as compared to waterlogging sensitive soybean lines grown under waterlogged condition has been shown to be associated with increases in the levels of both SA and ethylene but not that of ethylene alone [23].

The absence of any effect of exogenous SA on shoot growth under both non-waterlogged and waterlogged conditions suggests that SA does not have primary role in the regulation of shoot growth in wheat plants. In contrast, treatment with SA enhanced tiller formation under both conditions. The formation of tillers from axillary meristem is regulated by phytohormones such as cytokinin (CK) that acts as positive regulator of tillering, and auxin and strigolactones (SL), which act as inhibitors of tillering [28]. It has been shown previously that SA induces the expression levels of CK signaling genes such as those encoding the Arabidopsis histidine phosphotransfer (AHP6), which acts as positive regulator of CK signaling [29], and the Arabidopsis response regulator (ARR), which is a known mediator of CK signaling [30]. Furthermore, induction of tillering in tobacco plants overexpressing the Ras-related small GTP-binding protein 1 (RGP1) gene has been shown to be associated with increases in the levels of both CK and SA [31]. It therefore likely that the exogenous SA applied to our wheat plants induced CK production and signaling, and thereby tiller initiation. Previous reports have also implicated SA in the regulation of the biosynthesis, transport and signaling of auxin, which acts as important regulator of tiller formation/branching in plants. For example, SA represses the expression of genes encoding auxin receptor (TIR1) and auxin importer and exporter (AUX1 and PIN7) [32], and such suppression of auxin transport and signaling has been shown to lead to an increase in the number of tillers [33][34]. Therefore, the prevalence of enhanced tiller formation in response to SA might suggest the suppression of auxin production/signaling and its transport. Previous studies have also demonstrated the interaction between SA and SL. For instance, treatment of Arabidopsis seedlings with exogenous GR24, synthetic analogue of SL, induces SA level while SA level has been shown to be suppressed in more axillary growth2 (max2) mutant plants that are defective in SL signaling [35]. Therefore, the observation of induction in tiller formation in response to inhibition of SA biosynthesis in the control non-waterlogged wheat plants might imply suppression of SL signaling and thereby an increase in tiller number.

In summary, SA enhances the development of axile and surface adventitious roots in waterlogged wheat plants but represses their elongation, leading to the formation of shallow root system. This along with the pronounced induction of root aerenchyma formation by SA highlights the significance of SA in mediating morpho-anatomical responses and thereby adaptation of wheat plants to waterlogging as depicted in Figure 1. 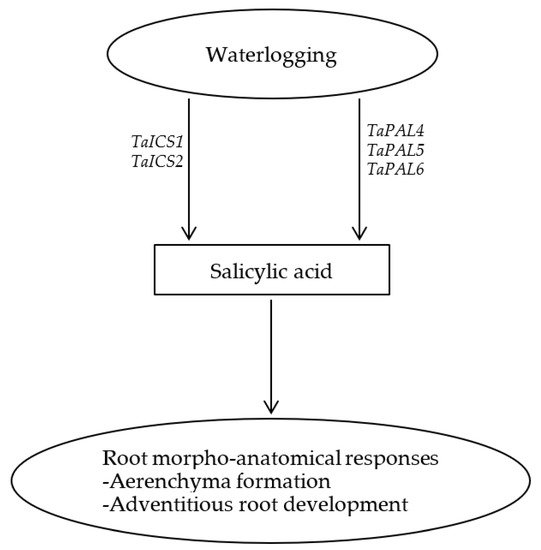 Figure 1. Schematic representation of the role of salicylic acid in inducing aerenchyma formation and development of adventitious roots in wheat under waterlogging condition.

More
© Text is available under the terms and conditions of the Creative Commons Attribution (CC BY) license; additional terms may apply. By using this site, you agree to the Terms and Conditions and Privacy Policy.
Upload a video for this entry
Information
Subjects: Plant Sciences
Contributors MDPI registered users' name will be linked to their SciProfiles pages. To register with us, please refer to https://encyclopedia.pub/register :
Belay T. Ayele
,
Anh Tuan Pham
,
Murali Krishna Koramutla
View Times: 205
Revisions: 2 times (View History)
Update Date: 16 Mar 2022
Table of Contents
1000/1000
Hot Most Recent