+1 point
Thank you for your contribution! You can also upload a video entry related to this topic through the link below: https://encyclopedia.pub/user/video_add?id=20585
Check Note
2000/2000
PEDOT:PSS/Nonionic WPU

Poly(3,4-ethylenedioxythiophene):poly(styrenesulfonate) (PEDOT:PSS) has the merits of high electrical conductivity and solution processability, and can be dispersed in water. To improve the stretchability of PEDOT:PSS-based transparent electrode films, the intrinsically conducting polymer PEDOT:PSS was blended with highly stretchable nonionic waterborne polyurethane (WPU) and coated on a thermoplastic polyurethane (TPU) film. Nonionic WPU has good compatibility with PEDOT:PSS, without affecting the acidity.

1.1. Compatibility of PEDOT:PSS and Nonionic WPU

Basically, the PEDOT chains are attached with PSS anions by electrostatic attraction and PSS roles the primary dopants for PEDOT. The chemical doping level was controlled through additional doping with H2SO4 or neutralization with ammonia. Sulfuric acid induced the PEDOT chains to form a crystalline nanofibril structure, in which positively charged PEDOT and negatively charged PSS were segregated [29]. The intrinsic electrical conductivity of PEDOT:PSS influenced the maintenance of sheet resistance at stretched state. Cationic and anionic WPU undergo aggregation due to pH-induced collision. Figure 1a shows the aggregation of both positive and negative ions. Nonionic WPU has good compatibility with PEDOT:PSS over a wide pH range, as well as good dispersion properties, and storage stability. Figure 1b shows the effect of the R–group of WPU on the compatibility with PEDOT:PSS doped with sulfuric acid [23,30].

Figure 1. (a) Compatibility of PEDOT:PSS and (b) sulfuric acid-doped PEDOT:PSS with different types of WPU.
Anionic sulfone-containing groups, phosphonates, and carboxylic acids are the most commonly used R–groups. Polyurethane contains cationic groups, tertiary sulfur atoms, or quaternary nitrogen atoms. These ionic groups induce aggregation because the dispersion balance in the emulsion is broken owing to the reaction of the PSS acid.
This characteristic indicates that PEDOT:PSS can be mixed with WPU. The excellent compatibility of PEDOT:PSS with nonionic WPU was further demonstrated by EDS. Figure 2 shows the nitrogen and sulfur distribution in the PEDOT:PSS/nonionic WPU composite with 2.0 wt% WPU, coated on the TPU film. The nitrogen atoms come from the WPU and TPU films, while the sulfur atoms come from PEDOT:PSS. Nitrogen and sulfur were evenly distributed throughout the coating layer. These results indicate that the PEDOT:PSS/nonionic WPU forms a miscible polymer blend. The good miscibility of these two polymers can be attributed to their strong interactions. Hydrogen bonds may form between PSS and WPU because of the oxygen atoms in PSS and the NH groups in WPU. In addition, protons can be transferred from the –SO3H of PSS to the –NH of WPU. As a result, –SO3H is converted to negatively charged –SO3−, whereas –NH is converted to positively charged –NH2+. Therefore, there is a coulombic attraction between PSS and WPU [31].

Figure 2. Scanning electron microscope (SEM) images and EDS elemental mapping images: (a) electron image; (b) nitrogen and (c) sulfur distribution in PEDOT:PSS/nonionic WPU (WPU 2.0 wt%) on TPU film.
As shown in Figure 3, The peaks between 3320 and 3335 cm−1 in the FTIR spectra of the films are attributed to the urethane and urea N–H groups. Two peaks located at approximately 3320 and 3450 cm−1 are often observed, which can be assigned to hydrogen bonding and non-hydrogen bonding N–H of the urethane and urea groups [32]. In this case, only a single peak at approximately 3333 cm−1 was visible, suggesting that most of the N–H groups are involved in hydrogen bonding. In this region, oscillatory peaks that gain intensity with the nature of the C=O group and its hydrogen bonding capacity appeared at different wavenumbers in the profile of WPU. Sharp peaks were distinguished at approximately 1720 cm−1, and shoulders were observed at approximately 1700 cm−1, assigned to the C=O groups of free urethane and the polyester groups, and hydrogen-bonded C=O of the urethane groups, respectively [32]. 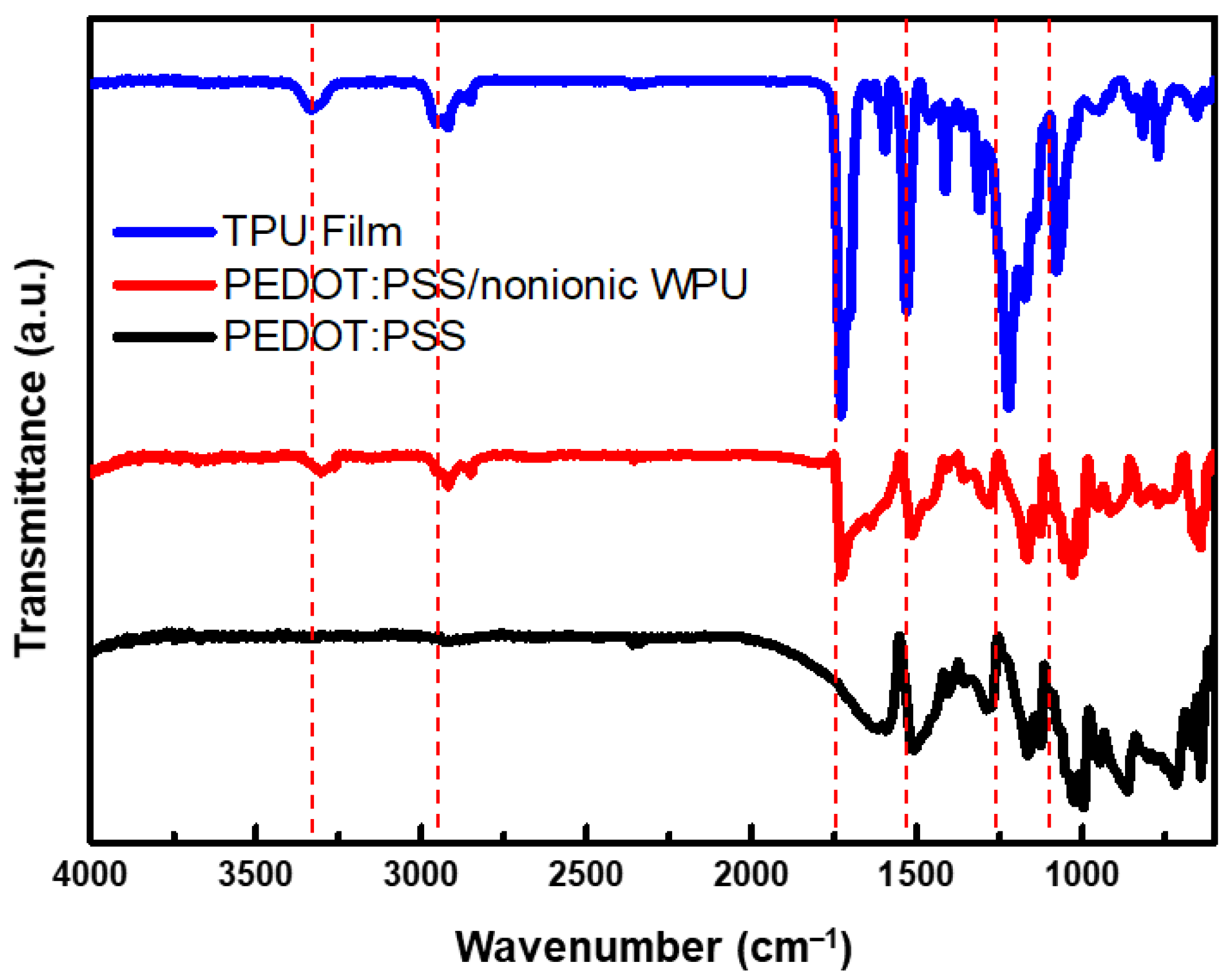 Figure 3. FTIR spectra of TPU film (Bare), PEDOT:PSS/nonionic WPU, and PEDOT:PSS coated on TPU film.
Nonionic WPU has good compatibility with acids. It exhibits good dispersibility and adhesion to the PSSH segments without PEDOT attached. It forms hydrogen bonds and coulombic interactions with PEDOT:PSS [33,34]. Acid doping is required to improve the electrical conductivity of PEDOT:PSS, and sufficient acid doping can be achieved in nonionic WPUs.

1.2. Preparation and Surface Morphology of the PEDOT:PSS/Nonionic WPU 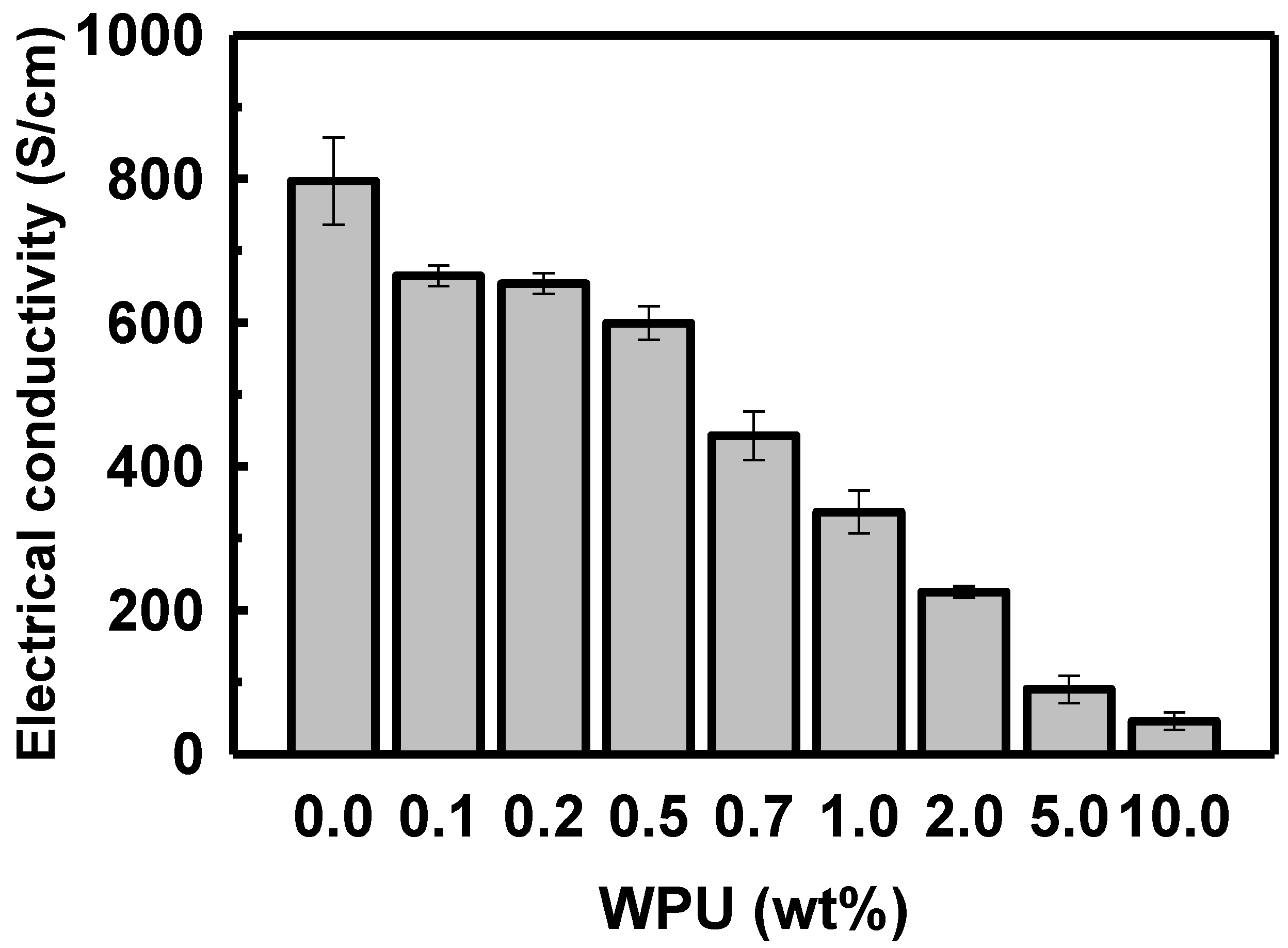 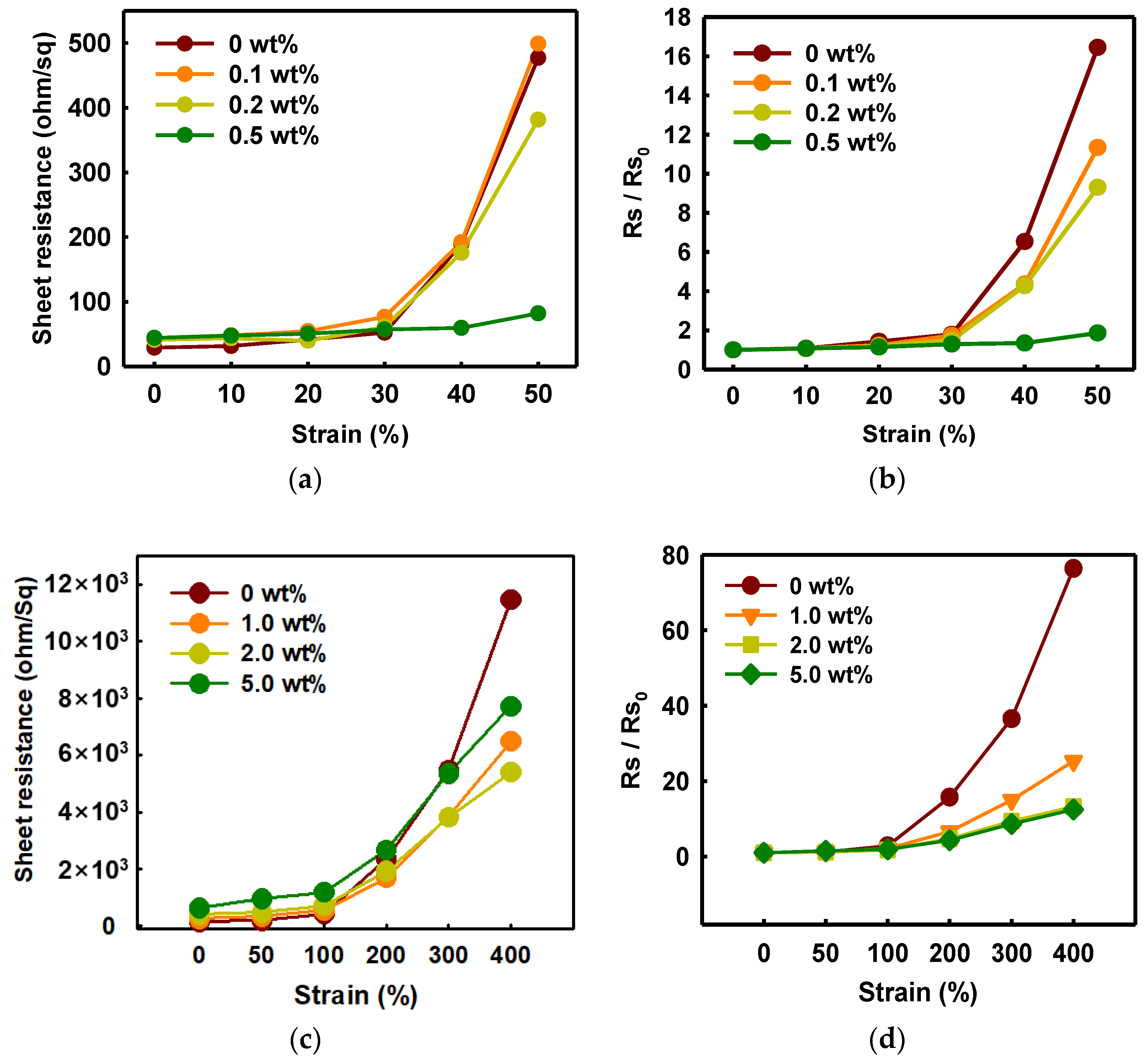 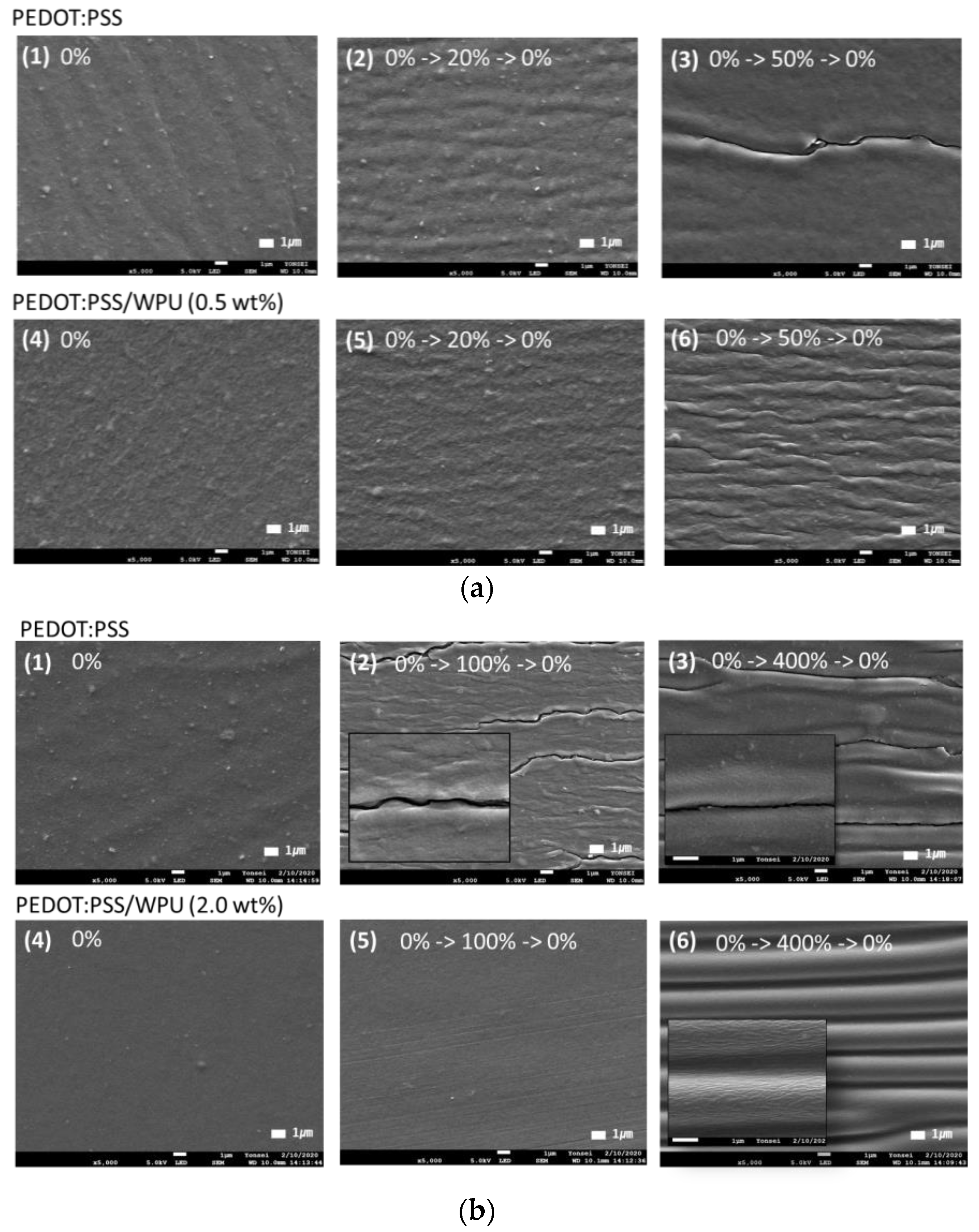 1.4. Mechanical Properties of Other Substrate Materials

By comparing the TPU and PDMS substrates, it was possible to observe the change in the adhesion and sheet resistance according to the strain that emerges owing to the difference in the substrate (see Figure 8a). Both the WPU and TPU films have reactive polyester groups; therefore, the adhesion was good. With the PDMS substrate, the sheet resistance increased sharply above 50%, even when WPU was added. Because the PDMS surface is hydrophobic, the strain and coating layers peeled off when subjected to different strains (Figure 8b). the TPU with high surface energy as the substrate film improved the deformability of PEDOT:PSS/nonionic WPU more than the PDMS with low surface energy.

Stretchable ACEL Device Employing PEDOT:PSS/Nonionic WPU Composite Electrodes on TPU Film
The PEDOT:PSS/nonionic WPU composite electrodes on the TPU film were used in a demonstration ACEL device. A ZnS:Cu phosphor mixed with silicone rubber acted as a stretchable light-emitting layer between the two electrodes. Figure 9a shows the structure of the ACEL device manufactured using the solution process. The ACEL device exhibited excellent elastic motion without degradation of the performance, even at 500% strain (Figure 9d). The ACEL device was powered by a rectangular pulse function (pulse voltage of 300 V and frequency of 400 Hz) and showed a maximum luminance of 14.29 cd/m2 from the emission peak at 467 nm, at a voltage of 300 V (Figure 9b,c). 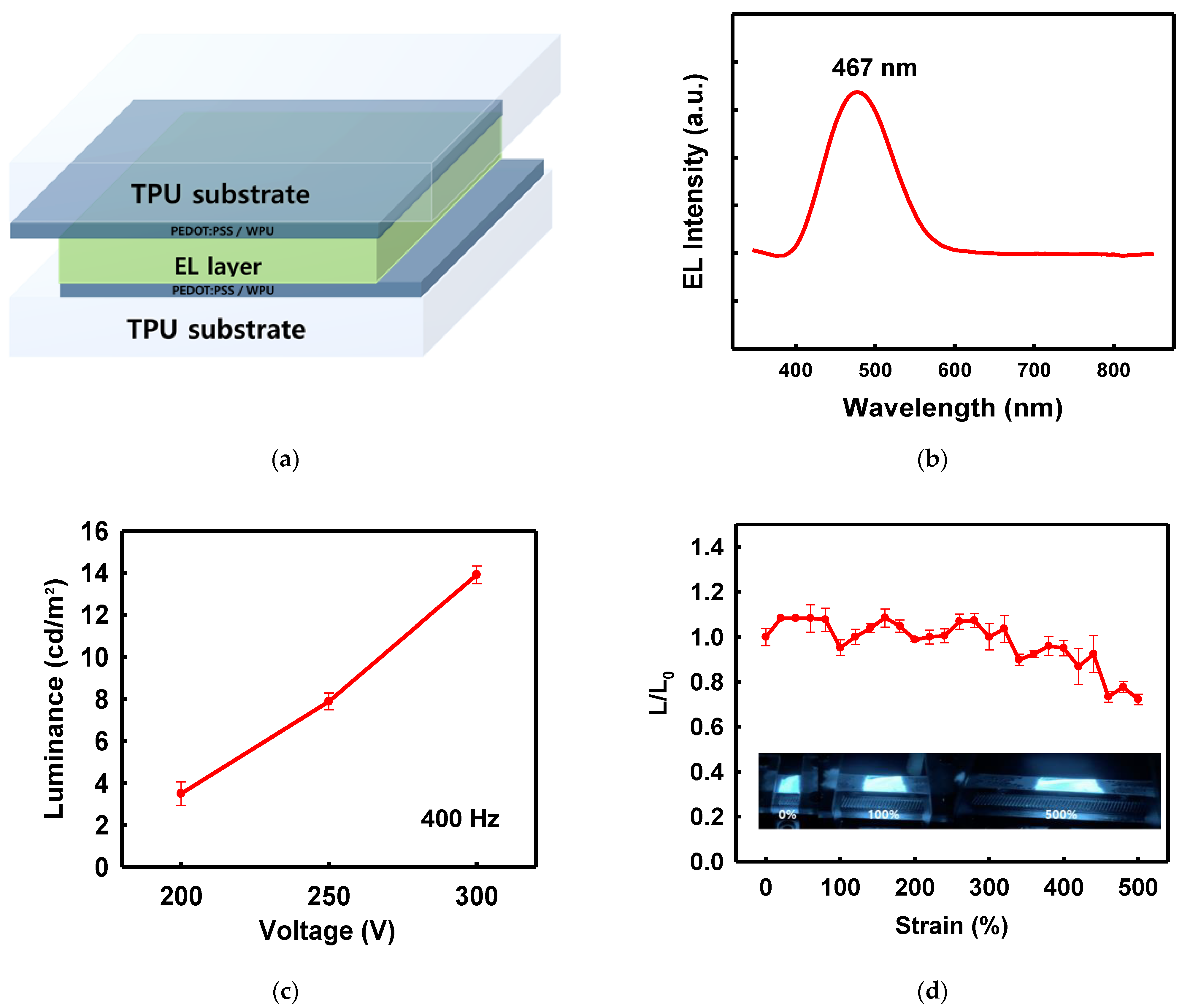 Figure 9. (a) Schematic of device structure, (b) electroluminescence spectrum of the device, centered at 467 nm, (c) luminescence according to voltage change at 400 Hz, (d) L/L0 ratio of the device under strain and photographs of the device under 0, 100, and 500% strain.
Figure 9d shows the deformation-dependent properties of the stretchable ACEL devices. The stretchable ACEL device maintained the 70% of the initial luminance at 500% stretched state, showing very stable emission performance (Figure 9d).
© Text is available under the terms and conditions of the Creative Commons Attribution (CC BY) license; additional terms may apply. By using this site, you agree to the Terms and Conditions and Privacy Policy.
Upload a video for this entry
Information
Subjects: Polymer Science
Contributor MDPI registered users' name will be linked to their SciProfiles pages. To register with us, please refer to https://encyclopedia.pub/register :
Jung Hyun Kim
View Times: 335
Revisions: 2 times (View History)
Update Date: 16 Mar 2022
Table of Contents
1000/1000
Hot Most Recent