+1 point
Thank you for your contribution! You can also upload a video entry related to this topic through the link below: https://encyclopedia.pub/user/video_add?id=20475
Check Note
2000/2000
Ethanol Stability and Composition of Camel Milk

Camel milk has recently gained the interest of consumers and the dairy industry, as it is widely suggested as an ideal substitute for cow milk. The nutritional value and the bioactivity of camel milk proteins have received particular attention from research groups and industrial companies around the world. Camel milk proteins can be used as ingredients in the manufacturing and stabilization of foods and beverages; however, in these applications, the controlled aggregation of milk proteins and stability at high temperatures and in alcohol are desirable.

Mother’s milk of different species is a high-quality source of nutrients at the early stages of life. Cow milk is the most commonly consumed and processed milk. Consumption of milk from other animals, such as camel milk, is becoming more widespread. Camel milk has recently gained the interest of consumers and the dairy industry, as it is widely suggested as an ideal substitute for cow milk [1]. Recently, the presence of alcohol (ethanol) and/or heat during the dispersion of sodium caseinate was found to have a significant effect on protein solubility but have no effect on the physical parameters of protein’s aggregations, such as size and surface charge [2].
In camel milk, despite the low ratio of casein to whey proteins, the casein fraction is mainly a substrate for bioactive peptide generation [3][4][5]. Camel milk caseins are primarily composed of β-casein, followed by α-casein and κ-casein (65%, 21%, and 3.47% of total casein, respectively) [6]. The camel milk whey proteins are predominantly α-lactalbumin, lactoferrin, camel serum albumin, peptidoglycan recognition protein, and immunoglobulins [7]. In contrast to bovine milk, β-lactoglobulin, which is a common allergen, is deficient in camel’s milk [8][9]. This deficiency, combined with the abundance of β-casein, ensures that camel milk is easier to digest and less allergenic than cow’s milk, making it tolerable for people suffering from allergic symptoms [10].
The nutritional value and the bioactivity of camel milk proteins have received particular attention from the scientific community and industrial companies around the world. Camel milk or proteins can be used as ingredients in the manufacturing and stabilization of foods and beverages; however, in these applications, controlled aggregation of milk proteins and stability at high temperatures and in alcohol is desirable. In the past, the ethanol stability of milk was used as an indicator of its freshness and to provide information on the stability of raw milk at ultra-high temperatures and powder processing [11][12]. Thus, alcohol testing was extremely useful to the global dairy industry since it allowed acidic milk, such as colostrum or mastic milk, to be processed without causing quality issues or coagulation in the dairy pasteurizer’s heating plates [13]. Much attention has been devoted to the heat stability of camel milk in recent years [14], but there is relatively little published information on the effects of ethanol on camel milk protein stability.
Ethanol stability is defined as the minimum concentration of added aqueous ethanol that results in milk coagulation. It is related to the chemical properties of milk, including pH, divalent cation content, and saline balance. The ethanol stability of cow milk is pH dependent with a typical sigmoidal pH profile; increasing the pH value of milk increases its ethanol stability.
Regarding casein fraction, the addition of ethanol to milk allows for interaction between charges on the κ-casein layer by reducing the dielectric constant of the medium [15], which decreases the negative micellar charges and their repulsion force and then promotes milk coagulation. Hence, it is relevant to know how milk proteins are destabilized by ethanol from a technological point of view. Furthermore, Horne [12] and Rosa et al. [13] reported that ethanol stability differs from one species to another. In comparison to cow milk, there is a scarcity of current understanding in the alcohol stability of camel milk. Sagar et al. [16] reported that camel milk has negative alcohol stability, though no visible flakes nor coagulation formation were reported. On the other hand, in other studies, the addition of salts and increasing pH values were found to improve the alcohol stability of camel milk to up to 85% [16][17]. Furthermore, the addition of EDTA to camel milk can improve ethanol stability [18]; moreover, it could convert sterilized camel milk from type A to B [19]. 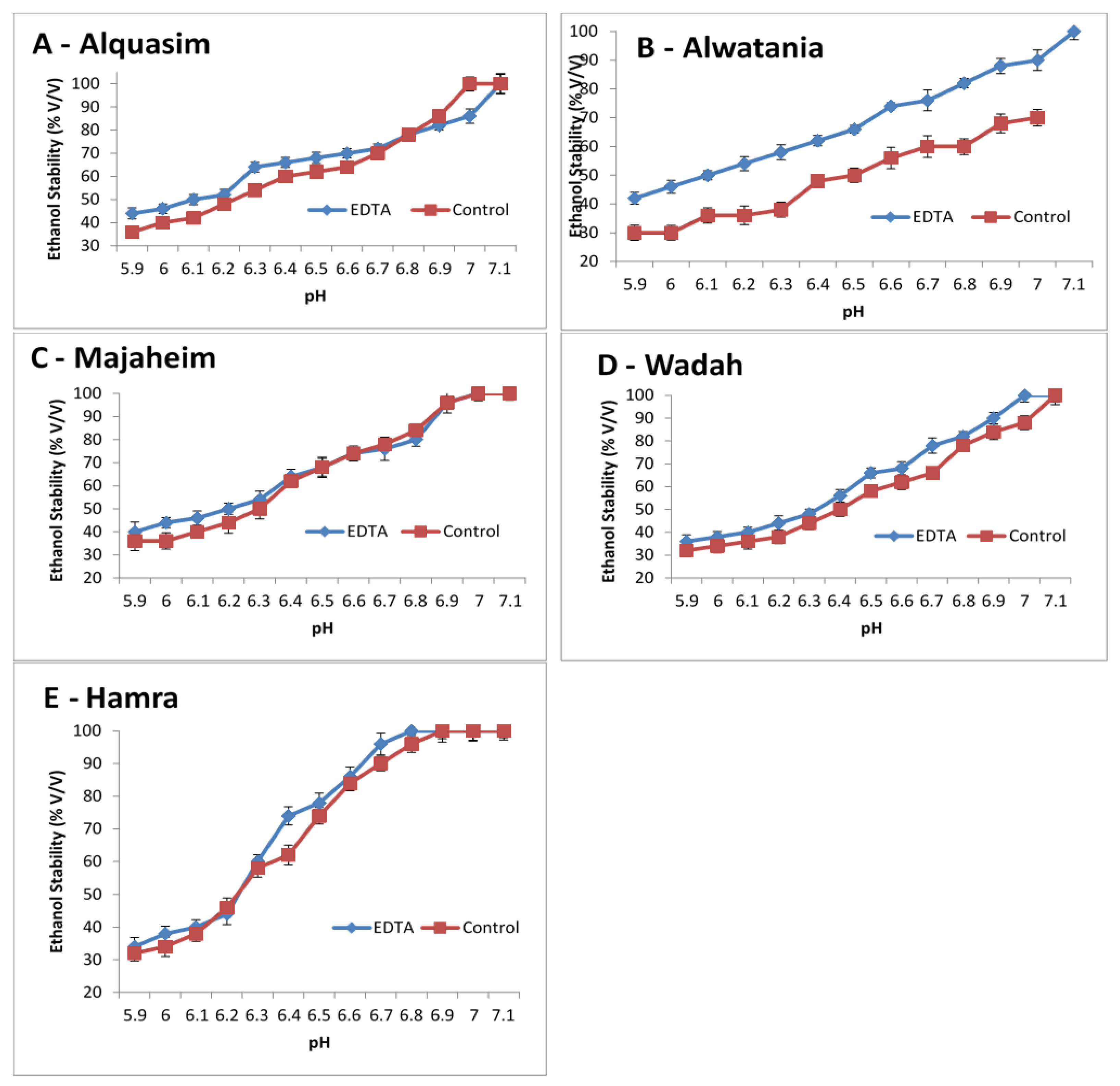 More
© Text is available under the terms and conditions of the Creative Commons Attribution (CC BY) license; additional terms may apply. By using this site, you agree to the Terms and Conditions and Privacy Policy.
Upload a video for this entry
Information
Subjects: Biochemical Research Methods
Contributor MDPI registered users' name will be linked to their SciProfiles pages. To register with us, please refer to https://encyclopedia.pub/register :
Omar Alhaj
View Times: 244
Revisions: 4 times (View History)
Update Date: 11 Mar 2022
Table of Contents
1000/1000
Hot Most Recent