+1 point
Thank you for your contribution! You can also upload a video entry related to this topic through the link below: https://encyclopedia.pub/user/video_add?id=20408
Check Note
2000/2000
HMGB1 Structure and Receptors

High mobility group box 1 (HMGB1) is a highly conserved DNA-shepherding protein that is plentiful in the cell nucleus. HMGB1 is actively secreted by multiple cell types, including macrophages, monocytes, dendritic cells, natural killer cells, endothelial cells, and platelets, and passively by necrotic and damaged cells. Either mode can release substantial amounts of extracellular HMGB1, which participates in multiple biological functions. Serum and liver levels of HMGB1 are significantly increased in some schistosomiasis patients with inflammatory responses, suggesting a close association with disease progression.

High mobility group box 1 (HMGB1) is a highly conserved DNA-shepherding protein that is plentiful in the cell nucleus [1]. HMGB1 is actively secreted by multiple cell types, including macrophages, monocytes, dendritic cells, natural killer cells, endothelial cells, and platelets [2], and passively by necrotic and damaged cells [3][4]. Either mode can release substantial amounts of extracellular HMGB1, which participates in multiple biological functions. Serum and liver levels of HMGB1 are significantly increased in some schistosomiasis patients with inflammatory responses, suggesting a close association with disease progression [5]. Moreover, recent studies suggest that HMGB1 is significantly upregulated in patients with schistosome-induced hepatic fibrosis as well as animal models [6]. Meanwhile, inhibition of the translation and release of HMGB1 or blocking related signaling pathways via the HMGB1 receptor can protect against hepatic inflammation and fibrosis, suggesting that HMGB1 may be a vital factor in schistosome-induced liver disease as well as a potential therapeutic target [6][7][8].

HMGB1, first isolated and identified in 1973 by Goodwin et al. [9], is a non-histone chromosome-binding protein composed of 215 amino acid (aa) residues and is named to describe the high electrophoretic mobility in polyacrylamide gels. The structure of human HMGB1 is composed of two functional DNA-binding domains, the A box (aa 9–79) and B box (aa 95–163), an N-terminus, and a C-terminus, known as the “acidic tail”, which consists of 30 glutamic and aspartic acid residues [10] (Figure 1). The sequence of HMGB1 is 98.5% identical in all mammals. The B box is the functional region of HMGB1 that promotes inflammation, while the A box is the antagonistic site that can competitively inhibit the pro-inflammatory effect of the B box [4]. Besides, HMGB1 carries two nuclear localization signals (NLSs): NLS 1, which is located in the A box (aa 28–44), and NLS 2, located in the B box (aa 179–185) [11]. Moreover, HMGB1 contains a Toll-like receptor (TLR) binding site (aa 89–108) and a receptor for advanced glycation end-products (RAGE) binding site (aa 150–183) [10]. Interestingly, the HMGB1 sequences of S. japonicum (SjHMGB1) and S. mansoni (SmHMGB1) are identical and share 60% similarity with mammalian HMGB1. Unlike human HMGB1, which contains an unbroken run of 30 glutamic or aspartic acid residues, SmHMGB1 and SjHMGB1 possess unusually short acidic C-terminal tails, composed of five acidic residues interrupted by two serine residues [12]. 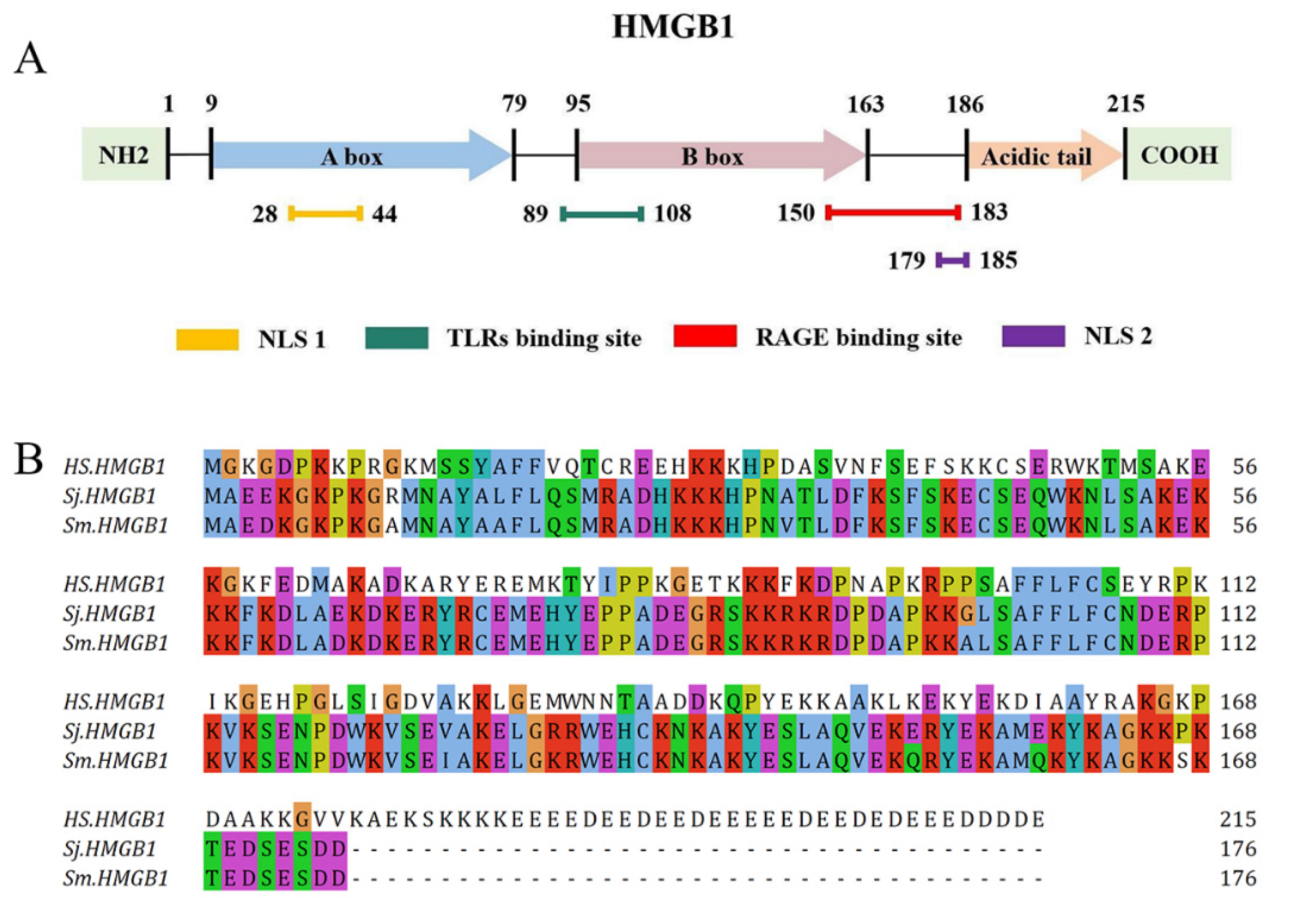 RAGE, a transmembrane protein of the immunoglobulin superfamily, is expressed on the surfaces of monocytes, macrophages, endothelial cells, vascular smooth muscle cells, and neurons [13]. RAGE expression is higher in most cell types and tissues in a disease state as compared with a healthy state [14][15][16]. In addition to HMGB1, RAGE interacts with many other ligands, such as advanced glycation end products, members of the S100 protein family, and beta-amyloid peptide [14], which further triggers activation of the Ras-extracellular signal-regulated kinase 1/2 (ERK1/2) pathway [17], stress-activated protein kinase/c-Jun-NH2-terminal kinase (SAPK/JNK) pathway, Cdc42/Rac pathway [18], and p38 mitogen-activated protein kinase (MAPK) pathway [16]. Finally, the proinflammatory effects of HMBG1 can be amplified through signaling cascades of transcription factors, such as nuclear factor (NF)-κB [19], cAMP response element-binding protein [17], and members of the signal transducers and activators of transcription family with the involvement of the RAGE ligand [20]. Accumulating evidence suggests that activation of RAGE signaling in the liver can lead to the development of numerous types of hepatic disorders [21]. For example, Gaens et al. [22] found that fatty acids could stimulate Nε-(carboxymethyl) lysine accumulation in hepatocytes and subsequently elicit inflammatory reactions and hepatic steatosis via the induction of RAGE, while Nomota et al. [23] suggested that the lack of galectin-3 was related to the progression of non-alcoholic fatty liver disease in mice, which was also associated with up-regulated RAGE expression in hepatocytes.
TLRs are type I transmembrane pattern recognition receptors that can identify diverse signals, such as damage-associated molecular patterns and pathogen-associated molecular patterns [24]. TLRs have been identified as intermediary players linking the innate and adaptive immune responses in favor of initial enhancement of inflammation [25][26][27]. In gastric ischemia-reperfusion injury, HMGB1 interacts with TLR2, which leads to significant organ damage after reperfusion [28]. Meanwhile, Azam et al. [29] found that myeloid differentiation primary response 88 (MyD88)- or non-MyD88-dependent signaling could be activated by HMGB1 to trigger downstream signals via activation of TLR4, which enhances the secretion of cytokines via the NF-κB pathway. In addition, HMGB1 has been associated with activation of the TLR9/MyD88 pathway and the release of proinflammatory cytokines in autoimmune thyroiditis [30]. Besides, the lack of HMGB1 leads to increased susceptibility to hepatocyte death through TLR9 in response to oxidative stress [8]. In summary, TLRs participate in the signal transduction of HMGB1, which further promotes the transcription of cytokines and chemokines via activation of inflammatory signaling pathways.

4. HMGB1 as a Therapeutic Target

Increasing evidence indicates that as a multi-functional mediator, HMGB1 contributes to a variety of systemic diseases, including ischemia-reperfusion injury, enterocolitis, sepsis, and liver injury, indicating the potential of HMGB1 as a therapeutic target [28][31][32][33]. Recently, under the worldwide threat of sudden acute respiratory syndrome (SARS-CoV-2), the etiological agent of COVID-19 disease, the progression from acute respiratory failure to sepsis has been correlated with the release of HMGB1 [34]. Wei et al. [35] proposed that HMGB1 regulates the expression of angiotensin-converting enzyme 2, which is essential for the entry of SARS-CoV-1 (highly pathogenic zoonotic CoVs), SARS-CoV-2 (highly pathogenic zoonotic CoVs), and human coronavirus NL63. Emerging studies have indicated that the inhibition of HMGB1 can improve the courses of all related diseases. For instance, knockout of HMGB1 protected against cell death induced by SARS-CoV-2 and the degree of protection were correlated with the level of HMGB1 [35]. Inhibition of HMGB1 was found to improve intestinal inflammation in necrotizing enterocolitis by inhibiting NLR pyrin domain containing 3 via the TLR4 and NF-κB signaling pathways [32]. Besides, HMGB1-neutralizing antibodies relieved liver inflammation and functional injury in the early stages of nonalcoholic fatty liver disease [36]. Another study demonstrated that HMGB1-neutralizing antibodies rescued cystic fibrosis-induced macrophage dysfunction and reduced lung inflammation induced by Pseudomonas aeruginosa [37].

More
© Text is available under the terms and conditions of the Creative Commons Attribution (CC BY) license; additional terms may apply. By using this site, you agree to the Terms and Conditions and Privacy Policy.
Upload a video for this entry
Information
Subjects: Agriculture, Dairy & Animal Science
Contributor MDPI registered users' name will be linked to their SciProfiles pages. To register with us, please refer to https://encyclopedia.pub/register :
Haoran Zhong
View Times: 156
Revisions: 2 times (View History)
Update Date: 11 Mar 2022
Table of Contents
1000/1000
Hot Most Recent