Submitted Successfully!
Thank you for your contribution! You can also upload a video entry related to this topic through the link below:
https://encyclopedia.pub/user/video_add?id=20094
Check Note
2000/2000
Sweet Boron
Edit

Boron neutron capture therapy (BNCT) is a binary type of radiotherapy for the treatment of cancer. Due to recent developments of neutron accelerators and their installation in some hospitals, BNCT is on the rise worldwide and is expected to have a significant impact on patient treatments. Therefore, there is an increasing need for improved boron delivery agents.

Boron neutron capture therapy (BCNT) is a binary radiotherapeutic approach based on the nuclear capture of low-energy neutrons (thermal) by a boron-10 (10B) nucleus. 10B has a cross-section for neutron capture of 3840 barns (1 barn = 10−24 m2, the size of the uranium nucleus Mughabghab, S.F. (2003), ‘Thermal neutron capture cross-sections: Resonance integrals and g- factors’, IAEA Nuclear Data Section, Wagramer Strasse 5, A-1400, Vienna), by far greater than that of the elements (among others, nitrogen, hydrogen, and oxygen) commonly present in tissues.
When 10B captures a neutron, the formed 11B isotope is in an excited state which rapidly decays through a fission reaction producing an α particle and recoiling a lithium-7 (7Li) ion. These high-linear-energy transfer (LET) particles dissipate their energy by traveling a distance corresponding to a cell diameter. If a 10B-containing compound is preferentially accumulated within a cancer cell, the irradiation of the tumor area with a neutron flux gives rise to a lethal fission reaction confined within the boron-containing cells, providing selective destruction of the malignant cells saving the surrounding healthy tissues, provided that some requirements are fulfilled, as later discussed (Figure 1). 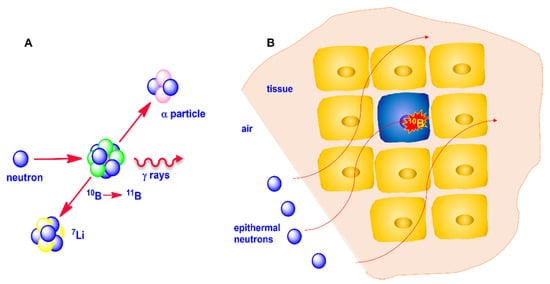 Figure 1. (A): Neutron capture by 10B and fission reaction of 11B; (B): thermalization of neutron and selective cancer cells destruction.
The principle of the possible therapeutic use of BNCT was first introduced by Locher in 1936 [1], and initially attempted at the Brookhaven National Laboratory [2] and at the Massachusetts General Hospital with irradiation at MIT nuclear reactor in Boston [3]. At the same time Soloway, again at the Massachusetts General Hospital, began studies for finding suitable non-toxic boron-containing compounds. These experiments failed essentially for a lack of selectivity of boron compounds used, together with the low penetration of thermal neutrons. For these reasons, the use of epithermal neutrons that are thermalized by water in the patient’s tissues when they arrive proximal to the tumor site was introduced.
The results obtained by Hatanaka using BSH (sodium mercapto-undecahydro-closo-dodecaborate) at the end of the 1960s [4] gave rise to renewed interest in BNCT both in Europe and in the United States, alongside the development of boron chemistry [5][6].
Since then, BNCT has been applied primarily to selected tumor types, mainly to high-grade gliomas and, more recently, to recurrent head and neck cancer [7], although other kinds of tumors have been occasionally treated [8].
Two basic requirements must be fulfilled to have a chance for effective therapy: first, neutron sources with a sufficient neutron flux are required. Until the second half of the last decade, the only neutron sources with an adequate flux for therapeutic use were nuclear reactors, which hampered the wide development of BNCT due to limitations intrinsic to the use of nuclear reactors. Nowadays some accelerators are already available in Japan, China, and Finland, and others are under installation [8].
The availability of in-hospital neutron sources is expected to give a boost to clinical trials and patient treatment using BNCT. Therefore, the demand for new, more efficient boron delivery agents is rising and will increase in the future.
To have the possibility of successful therapy, the compounds must have some important and commonly accepted requirements: (a) low toxicity; (b) high and selective tumor uptake which means a concentration of at least 20 μg of boron for g of tumor tissue, a tumor/normal tissue ratio and a tumor/blood concentration higher than 3:1; (c) sufficiently fast clearance from normal tissues and blood and adequate persistence (several hours) in the tumor to allow neutron irradiation; (d) adequate water solubility [9].
After the failure of the initial trials during the 1950s–1960s in which boric acid and its derivatives were used, the need for more selective boron carriers immediately became clear. Starting from the pioneering work of Soloway [10] in Boston, a huge number of boronated compounds have been synthesized [9][11]. Three molecules have been approved for clinical use, namely sodium mercapto-undecahydro-closo-dodecaborate (or sodium borocaptate, Na2B12H11SH, BSH), L-boronophenylalanine (BPA) and decahydrodecaborate (GB-10). Currently, only two compounds are used for clinical trials, namely BSH, and BPA (Figure 2) which were shown to be safe in humans. 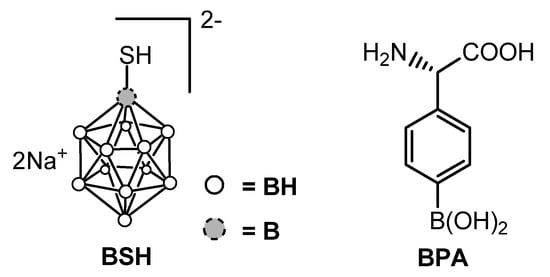 Figure 2. Structures of BSH and BPA.
BPA, administered as a fructose complex (BPA–F) to significantly increase its water solubility, entered into clinical use for the treatment of patients with high-grade gliomas, first in the United States and subsequently in Finland, Sweden, Holland, and Japan, and it subsequently became the drug of choice for clinical BNCT of patients with recurrent tumors of the head and neck region [12].
However, clinical results from the two compounds are not completely satisfactory, mainly because of their rapid clearance from blood and the significant variability in tumor uptake, especially in brain tumors. Both of them show low selectivity for cancer cells and short retention time, BPA being slightly better than BSH.
Therefore, combining all different conditions required for an efficient boron delivery agent for BNCT in a single compound has proven to be a difficult task. It should be noted that the development of efficient BNCT agents has significant differences with respect to a traditional chemotherapy drug or a tumor radiodiagnostic compound, the main problems being the significant amount of boron to be delivered to the tumor tissue which requires a large amount of compound to be administered, and the boron compound persistence within the tumor for a time sufficient to allow the treatment with contemporary clearance from normal tissues and blood.

Since their discovery, boron clusters have attracted great interest, forcing chemists to change the classical way to consider covalent bonds, although practical applications were not immediately perceived. The introduction of polyhedral borane anions [13], and their carborane analogs [14] contributed to reestablishing the interest in BNCT. The development of new compounds for BNCT mainly focused on carboranes and, to a lesser extent, on dodecaborate, essentially due to the high number of boron atoms delivered by each cluster-containing molecule. Three positional isomers of carboranes are possible, namely ortho-, meta- and para-carboranes (see e.g., [6] and ref cited therein). All these compounds are characterized by high hydrophobicity which increases in the order o-carborane > m-carborane > p-carborane. This feature, together with relatively easy access to o-carboranes, explains why many studies on polyhedral boron-cluster-containing compounds for BNCT applications have been oriented towards o-carborane derivatives.
On the other hand, icosahedral dodecaborates are doubly charged and therefore they are water soluble, although the boron cage maintains a surprisingly high affinity for hydrophobic surfaces, attributed to the chaotropic effect [15]. The use of dodecaborates in the preparation of derivatives for BNCT emerged more recently with respect to carboranes, when an efficient strategy for their functionalization was introduced by the group of Bregadze [16].
A commonly employed strategy to improve the water solubility of o-carboranes is their conjugation with a highly water-soluble moiety. Among different classes of natural and synthetic compounds, carbohydrates attracted attention—although their use increased only in recent years, probably because classical carbohydrate chemistry and boron chemistry were traditionally two distinct “chemical worlds”. The first examples of sugar-carborane conjugates exploited the so-called Ferrier rearrangement of glycals [17] and the reaction of lithiated carborane with protected aldehydo sugars (Scheme 1) [18], together with a few other approaches [19][20].

Scheme 1. First examples of sugar-carborane conjugates: (A): from glycals; (B): from aldehydo sugars.
At the end of the last century, mono- and bisglycosyl carboranes 7 and 10 were obtained [21][22] from the reaction of a decaborane–acetonitrile complex (6,9-bis-(acetonitrile)decaborane) with alkynyl glycosides 5 and 8, which gave a stimulus towards the synthesis of boron-containing sugars (Scheme 2). 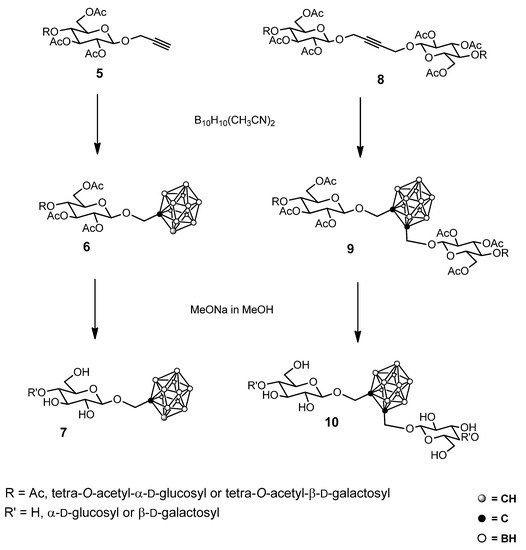 Scheme 2. Some examples of glycosyl carborane synthesis.
After these seminal studies, several sugar-containing boron clusters were described and some of them were submitted to physicochemical and biological characterization. Among them, glycosides of sugars other than d-glucose or lactose, C-glycosyl carboranes, carbohydrate-containing thioderivatives of carboranes, and conjugates through an amide bond were described (Figure 3) [23][24][25][26][27][28][29].

Figure 3. Some representative sugar-containing boron clusters.
From these studies some preliminary general information was accessible, and this area expanded in the following years [30][31].
As previously stated, carboranes are highly hydrophobic and conjugation to sugars improves their solubility. It has been proven that at least two monosaccharidic units are required to allow water solubility of the compound [21]. It should be noted that when speaking about solubility, the nature of the obtained solution should be taken into account. Carboranes conjugated with a disaccharide have the propensity to act as a surfactant and to form micelles in solution, as demonstrated by their easy incorporation in liposomes [27], which could have negative effects on cell membranes. Moreover, the highly polar sugar part may hamper the compound to cross the blood–brain barrier; on the other hand, a proper choice of the sugar may exploit transport proteins such as GLUT1 to reach different body compartments.