Submitted Successfully!
Thank you for your contribution! You can also upload a video entry related to this topic through the link below:
https://encyclopedia.pub/user/video_add?id=1994
Check Note
2000/2000
Usutu virus in Europe
Edit
Upload a video
This entry is adapted from 10.3390/pathogens9090699

Usutu virus (USUV) is an emerging arbovirus isolated in 1959 (Usutu River, Swaziland). Previously restricted to sub-Saharan Africa, the virus was introduced in Europe in 1996. While USUV has received little attention in Africa, the virus emergence has prompted numerous studies with robust epidemiological surveillance programs in Europe. Epizootics and genetic diversity of USUV in different bird species as well as detection of the virus in mosquitoes suggest repeated USUV introductions into Europe with endemization in some countries. The zoonotic potential of USUV has been reported in a growing number of human cases. Clinical cases of neuroinvasive disease and USUV fever, as well as seroconversion in blood donors were reported in Europe since 2009. Since spreading trends of USUV are likely to continue, continuous multidisciplinary interventions ('One Health' concept) should be conducted for monitoring and prevention of this emerging arboviral infection.

Usutu virus (USUV) is an emerging arbovirus that belongs to the family Flaviviridae, genus Flavivirus, Japanese encephalitis serocomplex. Similar to other flaviviruses, USUV is a spherical, small, enveloped virus with a single stranded positive-sense RNA genome of ~12 kb. Phylogenetic analyses of the NS5 gene have shown that USUV strains clustered into eight genetic lineages: three African (Africa 1–3) and five European (Europe 1–5) [1]. In nature, USUV is maintained in a bird–mosquito–bird cycle, however the virus or antibodies detection were reported sporadically in humans, horses and other mammals (Figure 1).

USUV was isolated in 1959 from Culex neavei mosquito caught near the Usutu River in Swaziland [2]. After that, the virus was confined to Africa with only few human cases with fever, rash and jaundice reported [3]. In Africa, the USUV host range includes mosquitoes, birds, equids and dogs [4][5]. The virus was also isolated and nucleotide sequenced from five asymptomatic small mammals in Senegal that belong to two rodent species (black rat; Rattus rattus and multimammate rat; Mastomys natalensis) and a single species of shrew (Crocidura sp.) (Figure 1) [6].

A retrospective analysis of archived tissue samples originating from a bird die-off showed that USUV emerged in Europe in 1996 (Tuscany region, Italy), five years before the advent of USUV-associated bird deaths in Austria which has been generally assumed as the starting point of the virus spread in Europe [7]. In 2001, the virus caused the first large outbreak in several bird species in the region of Vienna (Austria) [8]. In the following years, continuous geographic expansion of the USUV in Europe has been shown by reports of epizootics or small outbreaks as well as serologic detection in different wild and captive bird species [9][10][11][12]. In addition, the virus was detected in different native (mainly Culex pipiens) and invasive mosquito species (Aedes albopictus, Ae. japonicus) [13][14][15][16][17][18]. USUV RNA was also found in bats (Pipistrellus pipistrellus) in Germany and Belgium [19][20]. Moreover, USUV antibodies were sporadically detected in horses [21][22][23], dogs [24], squirrels [25], wild boar, roe deer [26] and lizards [27] (Figure 1), expanding the USUV host range (Figure 1), however these species are considered incidental hosts. 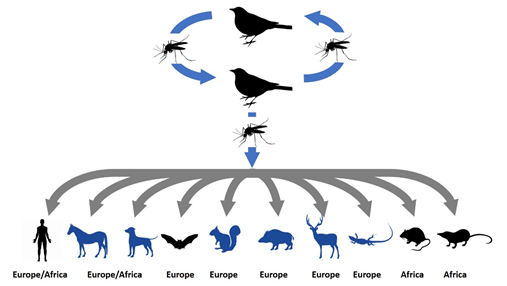 The zoonotic potential of USUV has been reported in a limited number of human cases. Few cases of neuroinvasive disease and USUV fever, as well as seroconversion in blood donors were reported in Europe since 2009 [11][28][29][30][31][32][33]. Phylogenetic analyses showed that the majority of USUV strains detected in humans, birds and mosquitoes belong to European USUV lineages, however several reports indicated the presence of African lineages as well [18][34][35][36].

The USUV diversity in Europe appeared in the last decade, however, the phylogenies suggest a long-term virus circulation in this region [37]. The presence of USUV was documented by virus isolation/detection or serologically in Austria, Belgium, Croatia, the Czech Republic, France, Germany, Greece, Hungary, Italy, the Netherlands, Poland, Serbia, Slovakia, Spain, Switzerland and the United Kingdom.

The emergence and geographic distribution of USUV infections in European countries is presented in Table 1 and Figure 2.

Table 1. Emergence of Usutu virus (USUV) in Europe: clinical cases/seroconversion/RNA detection/serologic evidence. In Europe, USUV emerged in 1996 in the Tuscany region (Italy) when it was detected by retrospective analysis of archived tissues from dead birds. In mosquitoes, USUV was discovered for the first time in 2006 (Spain) in a pool of Cx. pipiens. Seroconversion in horses was reported in 2008 (Italy), following the first two human clinical cases in 2009. In 2013, the virus was detected in two dead bats (Pipistrellus pipistrellus) in Germany. Until 2018, USUV infections were reported in 16 European countries. 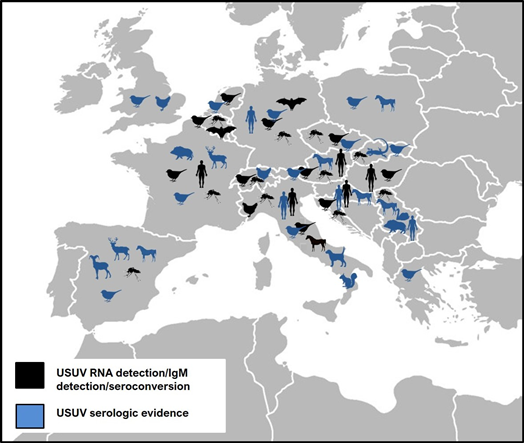 Circulation of different European and African USUV lineages (Table 2, Figure 3), suggests multiple introduction events to Europe from Africa. The Europe 2 lineage is the most commonly detected USUV lineage in the European countries [16][32][62][63]. The Europe 3 USUV lineage was predominantly circulating in Southern Belgium in 2017 and 2018 [20]. Recent studies from Germany [64] and the Netherlands [65] showed an increase in the USUV Africa 3 lineage detection during the same period. The genetic diversity of European lineages is most likely shaped by enzootic maintenance (in situ evolution) rather than by extensive migration, while African lineages are driven mostly by extensive migration and repeated introduction of viral variants from different geographic origins [37]. In addition to data from the published articles, the sequences retrieved from the GenBank suggest for certain European countries broader host range as well as USUV lineage diversity within a specific host.

*Blood donors/donations; **based on nucleotide sequences retrieved from the GenBank. 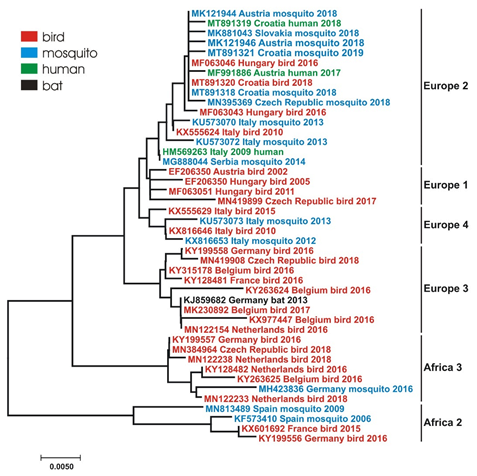 Figure 3. Neighbor-Joining tree of USUV sequences based on 495 nucleotides of the NS5 gen illustrating phylogenetic and host diversity of USUV strains detected in European countries. Taxon information includes the GenBank accession number, country in which the virus was detected, host and isolation/detection year. Colour codes for different hosts are shown in the upper left corner. USUV genetic lineages are indicated on the right. Scale bar indicates the mean number of nucleotide substitutions per site.

The integrated veterinary and human surveillance system ('One Health') based on the viruses detection in mosquitoes, migratory and resident birds as well as horses and poultry was proved to be useful for estimating the public health risk for other flaviviruses such as WNV. This enables the effective and timely control of the diseases in humans [78][79][80]. Since spreading trends of USUV are likely to continue, continuous multidisciplinary interventions in accordance with the 'One Health' concept, should be conducted to increase the awareness of USUV and implement appropriate monitoring and prevention methods for this emerging arboviral infection.

More
© Text is available under the terms and conditions of the Creative Commons Attribution (CC BY) license; additional terms may apply. By using this site, you agree to the Terms and Conditions and Privacy Policy.
Upload a video for this entry
Information
Subjects: Virology
Contributors MDPI registered users' name will be linked to their SciProfiles pages. To register with us, please refer to https://encyclopedia.pub/register :
Tatjana Vilibic-Cavlek
,
Vladimir Savic
View Times: 472
Revisions: 2 times (View History)
Update Time: 26 Oct 2020
Table of Contents
1000/1000
Hot Most Recent