+1 point
Thank you for your contribution! You can also upload a video entry related to this topic through the link below: https://encyclopedia.pub/user/video_add?id=19556
Check Note
2000/2000
ZrO2—CeO2 Ceramics Doped with Yttrium

The synthesis of ZrO2—CeO2 ceramics was carried out using solid-phase mechanochemical synthesis followed by thermal sintering of the obtained mixtures. ZrO2 and CeO2 powders in equal mole fractions (0.5:0.5) were chosen as initial components for synthesis.

Over the past few years, special attention has been paid to the search for new types of compounds and compositions for the creation of fuel elements with dispersed nuclear fuel, as well as materials for inert nuclear fuel matrices. Interest in these types of research is due to the need to increase the level of safety of nuclear reactors, the transition to uranium-free fuel and a decrease in the concentration of accumulated plutonium and nuclear waste [1][2][3]. The search for new types of materials is also due to the need to operate these materials under conditions of increased temperatures (more than 700 °C) and an increased radiation background, including neutron radiation, which initiates transmutation reactions, the product of which is the accumulation of helium, as well as interaction with fission fragments [4][5]. A distinctive feature of new types of inert matrix materials is the possibility of their operation at high temperatures due to the use of refractory oxide ceramics in them, as well as increased radiation resistance, which allows them to be operated much longer than conventional materials.
In this regard, for inert matrices of dispersed nuclear fuel in particular ceramics, the following requirements are put forward, which they must meet [6][7][8][9][10]. First, the inert matrix material should have good mechanical properties such as hardness, crack resistance and strength. At the same time, these materials must not only withstand short-term effects but also maintain stability for a long time of operation and, as a result, withstand the mechanical impact of the pressure of gaseous fission products, as well as the consequences of transmutation effects. Second, the material must be stable to phase changes capable of occurring as a result of prolonged radiation exposure or thermal conductivity. Additionally, the material must be highly compatible with the fuel composition, heat transfer agent and containment material. Thirdly, the material should have high thermal conductivity and low thermal expansion coefficients, which should ensure a good transfer of thermal energy from the fuel to the coolant.
Oxide ceramics such as ZrO2, CeO2, MgO, Al2O3 and Y2O3 [11][12][13][14][15], as well as various more complex oxide systems, are considered some of the promising material candidates for inert matrices of dispersed nuclear fuel [11][12][13][14][15]. Interest in them is due to the fact that the most studied nuclear fuels are UO2 and PuO2 oxide fuel, as well as their physicochemical, structural and mechanical properties and small sections of thermal neutron capture. Among the variety of oxide ceramics, great interest is shown in zirconium dioxide (ZrO2), the distinctive features of which are high chemical stability, mechanical and strength properties, as well as high compatibility, both with heat carriers and materials of fuel element shells [16][17]. However, despite the great prospects for the use of ZrO2 ceramics, there is one significant drawback, which lies in polymorphic phase transformations resulting both from elevated temperatures and from irradiation [18][19]. To eliminate this drawback, as a rule, various dopants are used, the addition of which leads to an increase in stability for polymorphic transformations as well as an increase in the strength and mechanical properties [20]. Another promising material among oxides is CeO2, which has high thermal and radiation stability as well as a number of properties that allow its use not only as inert matrices but also as a solid-fuel oxide element or catalyst [21][22][23].
One of the areas of research in the field of searching for and studying the properties of new types of materials based on oxide matrices is the creation of composite structures having several types of phases—the so-called cermets—which have a set of properties of components used in their production as well as increased resistance to external influences [24][25][26][27][28][29][30].
Based on the foregoing, the purpose of this work is to obtain ZrO2—CeO2 ceramics doped with yttrium of a complex multiphase composition with the formation of interstitial or substitutional solid solutions. The choice of zirconium and cerium oxides as components of the composite ceramics is due to their properties, which together should give a unique combination. The choice of yttrium as a dopant is due to the fact that, as a rule, yttrium is added to increase resistance to external influences, as well as to strengthen materials [31][32][33]. 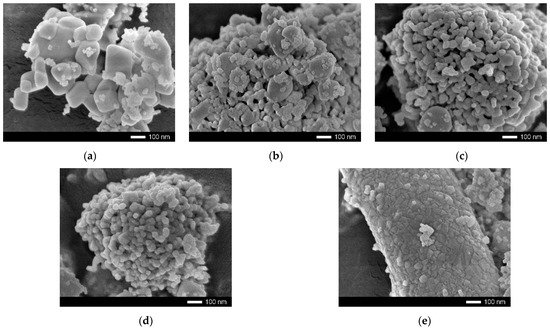 Figure 1. SEM images of morphological features of ZrO2—CeO2 ceramics, depending on the concentration of the yttrium dopant: (a) 0.00 mol, (b) 0.10 mol, (c) 0.15 mol, (d) 0.20 mol and (e) 0.25 mol.
Figure 2 shows the X-ray diffraction patterns obtained for a series of samples with different concentrations of yttrium dopant. A common observation for all the obtained diffraction patterns is that the shape and intensity of the reflections, as well as the ratio of the reflection areas to the background area, allowed us to conclude that the synthesized ceramics obtained by thermal sintering had a high structural ordering degree. At the same time, the main change in the X-ray diffraction patterns, depending on the dopant concentration, was the shift in reflections relative to the reference lines of the corresponding phases, determined using the full-profile analysis method. Such changes due to the substitution effect with an increasing dopant concentration could be due to both structural distortions and the formation of intercalation or replacement phases. These two factors were taken into account in the analysis and determination of the phase composition of the synthesized ceramics.

Figure 2. (a) X-ray diffraction patterns of the studied samples, depending on the dopant concentration. (b) Detailed representation of change in the position of diffraction reflections when determining the phase composition.

More
© Text is available under the terms and conditions of the Creative Commons Attribution (CC BY) license; additional terms may apply. By using this site, you agree to the Terms and Conditions and Privacy Policy.
Upload a video for this entry
Information
Subjects: Energy & Fuels
Contributor MDPI registered users' name will be linked to their SciProfiles pages. To register with us, please refer to https://encyclopedia.pub/register :
Artem Kozlovskiy
View Times: 185
Revisions: 3 times (View History)
Update Date: 28 Mar 2022
Table of Contents
1000/1000
Hot Most Recent