Submitted Successfully!
Thank you for your contribution! You can also upload a video entry related to this topic through the link below:
https://encyclopedia.pub/user/video_add?id=1892
Check Note
2000/2000
Brainstem Encephalitis
Edit
Upload a video
This entry is adapted from 10.3390/pathogens9090715

Brainstem encephalitis refers to inflammatory diseases affecting the midbrain, pons, and medulla oblongata. The causes of brainstem encephalitis include infections, autoimmune diseases, and paraneoplastic syndromes. Listeria is a common etiology of infectious rhombencephalitis. The trigeminal nerve has been proposed as a pathway through which Listeria monocytogenes reaches the brainstem after entering damaged oropharyngeal mucosa or periodontal tissues. Listeria monocytogenes may also invade the brainstem along the vagus nerve after it infects enteric neurons in the walls of the gastrointestinal tract.

After the prodrome stage, patients present progressive brainstem deficits, including cranial nerve palsy and cerebellar dysfunction/ataxia. The motor and/or sensory deficits of extremities, respiratory distress, consciousness impairment, seizure, fever, and meningitis, may also be present. Several possible causes of cranial nerve signs have been suggested: invasion of a cranial nerve and then its nucleus, intra-axonal spreading from a region in the brainstem to other regions, and space-occupying effect originating from abscesses and accompanying edema in the brainstem[6].

Two structures in the midbrain, the cuneiform nucleus (CN) and the pedunculopontine nucleus (PPN), participate in gait control [12][13]. The exact scopes of the CN and PPN are defined in a histochemically based atlas [14]. Lesions in these regions may result in gait disturbance[15]. The PAG is a region that is traditionally considered as a center for pain regulation. Recently, it has been regarded as a node that links the cerebellum and participates in motor control[16] (PAG, CN and PPN shown in Figure 1). 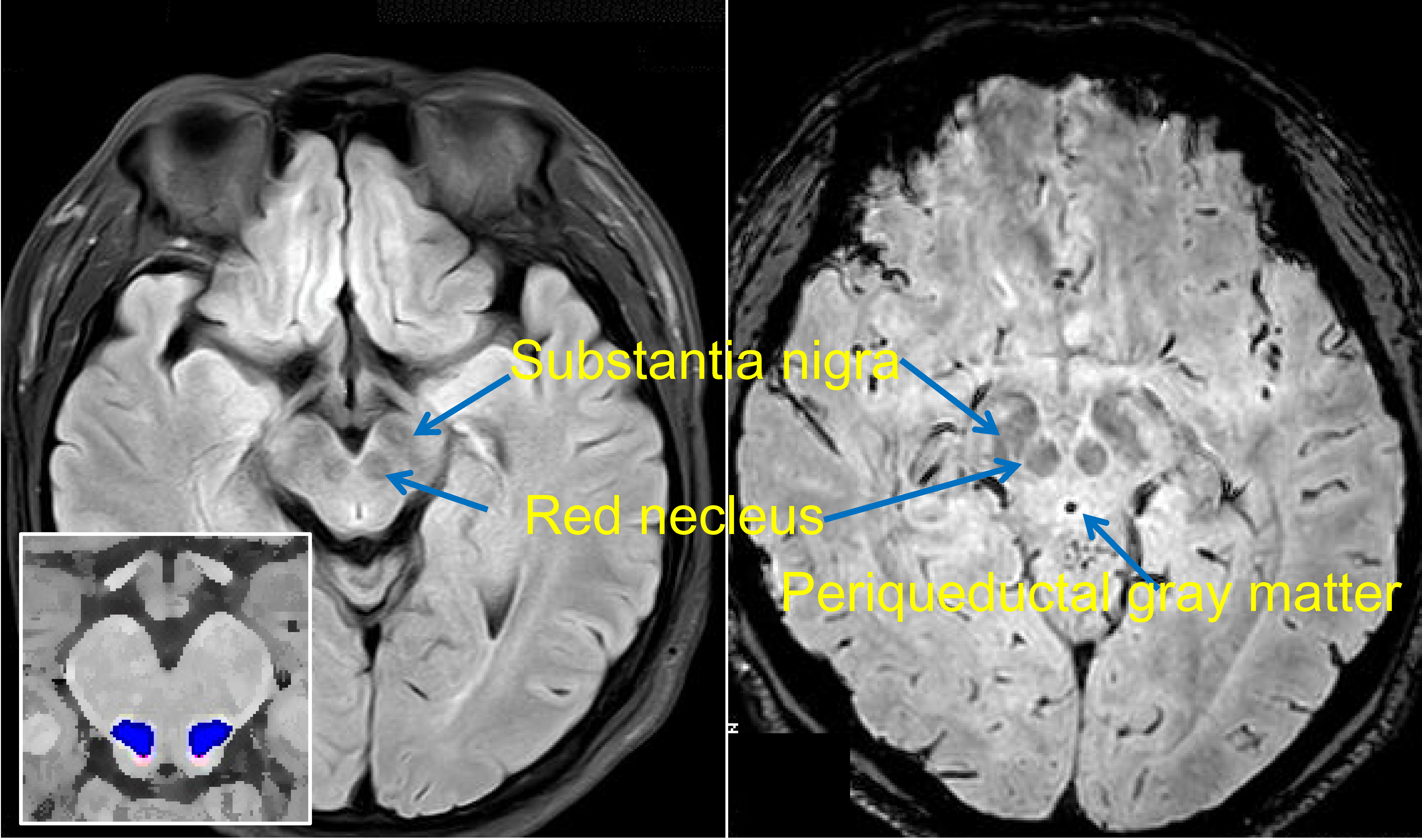 Figure 1. Brainstem nuclei on MRI. Flair (on the left) and susceptibility-weighted (right) MR images are shown. The substantia nigra and red nucleus present hypointense signals. The approximate locations of the cuneiform nucleus (CN) and the pedunculopontine nucleus (PPN) are indicated in red and blue, respectively. 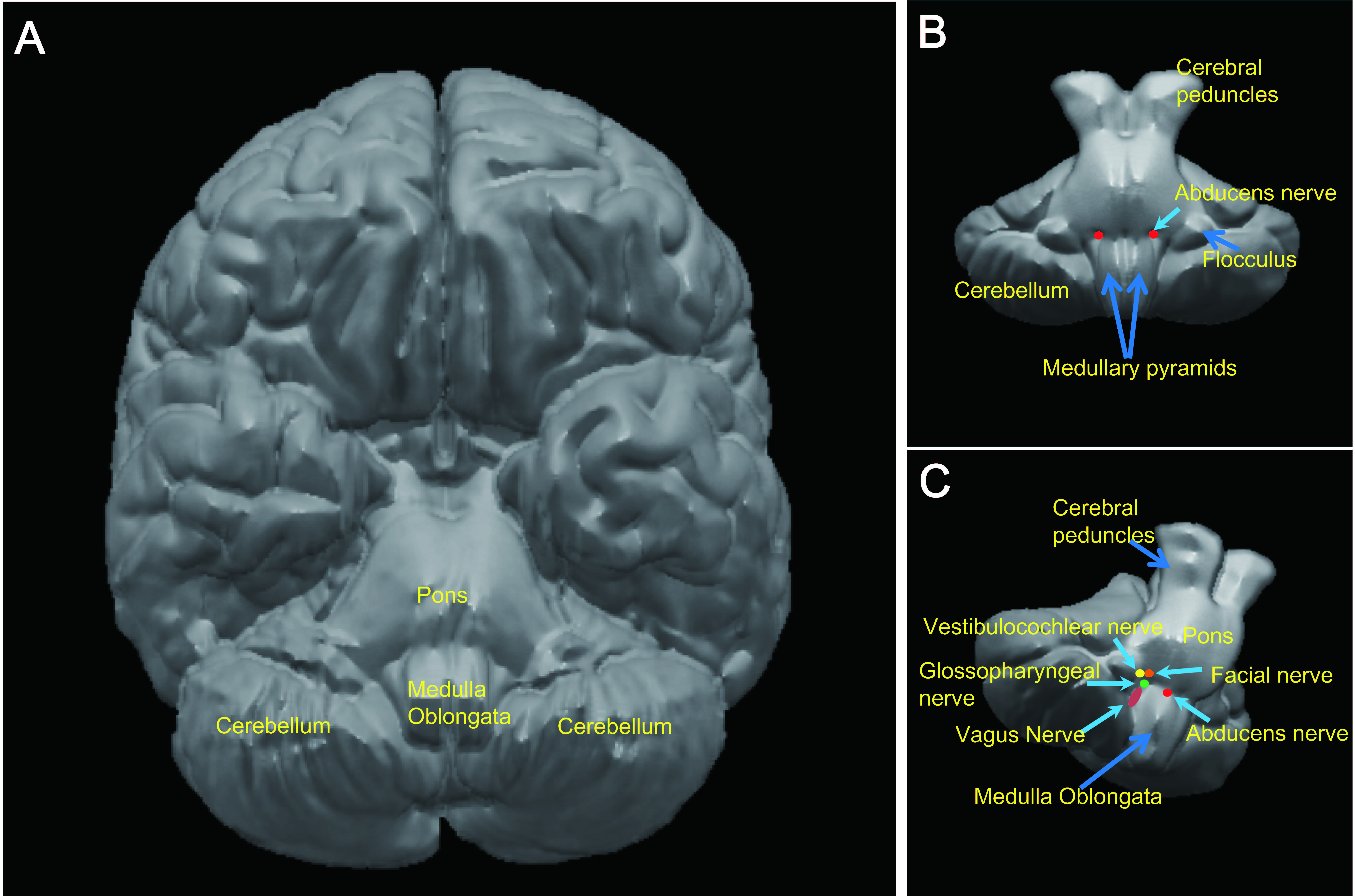 Figure 2. Spatial relationship among the roots of cranial nerves VI–X. (a) Inferior view of a 3D brain generated from an anatomical template (colin27T1_seg.nii in the SPM Anatomy toolbox) by using the MRIcroN software. (b) 3D brain (brainstem and cerebellum only) generated from an anatomical template (SUIT.nii in the SUIT toolbox). Red spots indicate the approximate locations of the roots of the abducens nerve. (c) Rotated 3D brainstem/cerebellum. Spots in different colors indicate the roots of cranial nerves. The vagus nerve is thicker than the glossopharyngeal nerve.

Due to a low spatial resolution, clinical routine MRI can hardly detect thin nerve roots such as the hypoglossal nerve. Nevertheless, thick cranial nerves, i.e., the trigeminal, vestibulocochlear, and facial nerves, are easily found. Recently, a review that included 123 cases of L. monocytogenes rhombencephalitis concluded that abnormal findings for the hypoglossal nerve are reported only occasionally, although the cranial nerves (fifth, seventh, ninth, tenth, and twelfth) supplying the oropharynx are commonly affected [6]. The introduced phenomena (i.e., the trigeminal nerve is thick and almost conspicuous; the glossopharyngeal and vagus nerves are jacent and difficult to differentiate; and the roots of the trochlear and hypoglossal nerves are too thin to be seen) may account for the numerous reports on the involvement of the trigeminal nerve and the scarcity of MRI reports on the involvement of the vagus nerve.

In sheep that are cutting, changing, and losing teeth, the inoculation of Listeria monocytogenes into the endodontium follows a route from the infected trigeminal nerve at the dental terminals to the brain via an ascending neuritis [23]. Notably, dental diseases are highly prevalent across the world and pose a serious public health challenge [24] but are often under-reported [25]. Therefore, we suggest that the frequently reported involvement of the trigeminal nerve in listeria rhombencephalitis [6] may partly stem from damaged dental and periodontal defense mechanisms due to dental diseases, which provide a route for the food‐borne Listeria monocytogenes to invade the brainstem through the trigeminal nerve.

An autopsy study of more than 200 natural cases of listeria encephalitis in cattle, sheep, or goats found that except for the frequent involvement of the trigeminal nerve, lesions are also detected in solitary nuclei and oculomotor and facial nerves. These findings suggested that Listeria monocytogenes may enter the brainstem via axonal migration along other nerves [26].

The long distance of the vagus nerve can account for the delay (approximately 4 weeks) between gastrointestinal tract infection and brainstem involvement in certain cases. The slow transition of an enteric pathogen to the brain through the vagal nerve is proposed as the cause of Parkinson's disease [28]. In a mouse model, the vagus nerve in the small intestine or colon infected by a modified rabies virus transports the virus into the nucleus tractus solitarius of the brainstem[29], thereby proving the existence of such a pathway. Prior to listeria brainstem encephalitis, during the prodrome stage that presents nausea, vomiting, fever, and sweating, the bacterium may be transported along the vagus nerve. After arriving in the nucleus tractus solitarius, it can spread to other parts of the brainstem. The mechanisms by which Listeria monocytogenes intrudes into the brainstem through the trigeminal nerve also permit the entry of the bacterium in the brainstem along the vagus nerve.

The trigeminal nerve is thicker than the vagus nerve and other cranial nerves on brainstem MRI. Hence, the hyperintensities of the trigeminal nerve are more frequently observed and reported in MR images than those of other cranial nerves. The roots of the glossopharyngeal and vagus nerves may not be seen in clinical MRI and are difficult to differentiate even by high-resolution MRI. This difficulty may account for the low rate of positive findings for thin and vagus nerves on MRI examination. High resolution MRI may have greater probability of detecting abnormalities of the vagus nerve.

More
© Text is available under the terms and conditions of the Creative Commons Attribution (CC BY) license; additional terms may apply. By using this site, you agree to the Terms and Conditions and Privacy Policy.
Upload a video for this entry
Information
Subjects: Pathology
Contributor MDPI registered users' name will be linked to their SciProfiles pages. To register with us, please refer to https://encyclopedia.pub/register :
Pengxu Wei
View Times: 2085
Revisions: 3 times (View History)
Update Time: 22 Oct 2020
Table of Contents
1000/1000
Hot Most Recent