Submitted Successfully!
Thank you for your contribution! You can also upload a video entry related to this topic through the link below:
https://encyclopedia.pub/user/video_add?id=188
Check Note
2000/2000
Transplacental Gene Delivery
Edit
Upload a video

Transplacental gene delivery (TPGD) is a technique for delivering nucleic acids to fetal tissues via tail-vein injections in pregnant mice. After transplacental transport, administered nucleic acids enter fetal circulation and are distributed among fetal tissues. In 1995, TPGD was established by Tsukamoto et al., and its mechanisms, and potential applications have been further characterized since. In 2019, Nakamura et al. demonstrated that intravenous injection of plasmid DNA containing genome editing component (CRISPR/Cas9 system) produced indels in fetal myocardial cells. In the future, this unique technique will allow manipulation of fetal cell functions in basic studies of fetal gene therapy.

The development of efficient methods for the transfer of nucleic acids to fetuses is an important goal for in utero gene therapy. Many of these approaches require ex vivo handling procedures that temporally expose fetuses, and micropipette injections of nucleic acids under anesthetic conditions are time-consuming and labor-intensive. As an alternative administration route, transplacental transfer of plasmid DNA constructs was reported after tail-vein injection into dam. After transplacental transport, administered nucleic acids reach the fetal circulation and efficiently transfect fetal cells. This approach represents a noninvasive and convenient method for the transfection of fetal tissues, and is hereafter referred to as transplacental gene delivery (TPGD). Since the work of Tsukamoto et al.[1], supporting data have been generated, and TPGD has been achieved with nucleic acids derived from plasmids or viral vectors[2]. Recently, Nakamura et al. elicited CRISPR/Cas9-mediated mutations in a target locus of embryonic cells for the first time using TPGD for acquiring genome-edited fetuses (TPGD-GEF)[3].

During TPGD, the placenta plays an important role in the transport of nucleic acids from the blood stream of pregnant dams to post-implantation embryos. The placenta is a highly specialized tissue that contributes to fetal developing by controlling the flow of nutrients through the umbilical cord to the uterine wall, by eliminating metabolic decomposition products and by mediating exchange gas between maternal and fetal circulatory systems[4]. 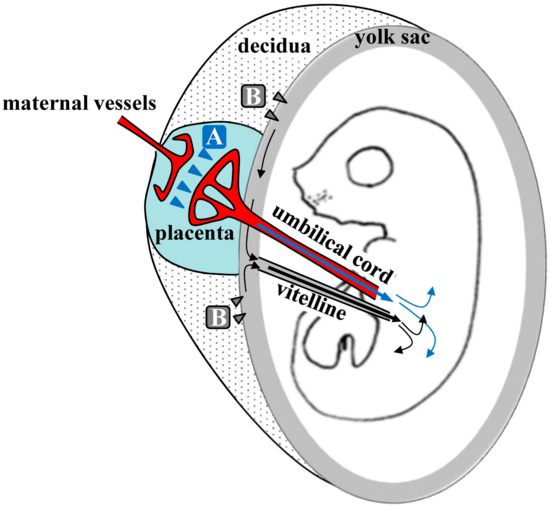 Figure 1. Hypothetical mechanism of transplacental gene delivery (TPGD) as suggested by Kikuchi et al.[5]; Following TPGD on E12.5, when placental circulation is established, intravenously injected plasmid DNA/lipid complexes may be transferred from maternal blood to the fetus via at least two routes. Flow via the placenta to the embryo is indicated by the blue arrowheads (area A); injected plasmid DNA is transferred beyond the blood-placenta barrier (BPB) and enters the umbilical cord. Flow from the decidua to the yolk sac is indicated by the gray arrowheads (area B); some DNA becomes trapped in yolk sac and is transferred to the embryo after the establishment of functional placental circulation.

Because the placenta is the most species-specific organ, hypotheses that are generated from rodent experiments extrapolate poorly to humans [8]. However, accumulating evidence suggests that nanoparticles in the maternal blood stream can be transferred to the fetus via the placenta. Transfer of nanoparticles through the placental barrier requires passage through syncytiotrophoblast (ST) and villous stroma (VS) layers, and through endothelial cells of fetal capillaries, evoking paracellular and transcellular pathways, respectively [9]. Nanoparticles of less than 25 nm in diameter can pass through the paracellular pathway and penetrate ST layers via passive diffusion, thus entering the VS layers with ease. Cationic nanoparticles are also increasingly considered as vehicles for gene delivery and may directly fuse to ST layers, because basal ST membranes are negatively charged. Other nanoparticles usually employ the transcellular pathway, as exemplified by endocytosis and exocytosis. Alternatively, nanoparticles may be taken up by STs via phagocytosis, clathrin-mediated endocytosis, caveolae-mediated endocytosis, or micropinocytosis. However, these routes are subject to endosomal escape pathways, lysosomal secretion, and multivesicular body (MVBs)-related secretions. In all cases, nanoparticles diffuse into fetal circulation through endothelial cells of fetal capillaries (Figure 2).

In human placenta tissues, most drugs of less than 600 Da are known to reach the fetus by passive diffusion, whereas drug molecules of over 1000 Da[10]  require transport via specific receptor-mediated pathways on ST surfaces. Macromolecules, such as immunoglobulin G antibody (~150 kDa) and vitamin B12 (1.3 kDa), are known to cross the placenta[11]. Hence, such receptor-mediated transfer systems may be critical for delivery of large molecules using TPGD in humans. The mechanisms underlining transplacental transport of substances remain poorly understood, however, and further research will be needed prior to application of TPGD in humans.

Figure 2. Schematic of nanoparticle transplacental transport mechanisms in humans (based on Zhang et al. [9]); nanoparticles in the maternal circulation cross the placental barrier and are transported to the fetus via various routes. The transcellular route is mediated by endocytosis and exocytosis. Nanoparticles are taken up via macropinocytosis, endocytosis, and phagocytosis in syncytiotrophoblast (ST) cells and are then exocytosed from endocytic vesicles through the multivesicular bodies (MVBs)-related secretion and endosomal escape. After entering the villous stroma (VS), nanoparticles cross endothelial cells of fetal capillaries by diffusion or via exosomes and enter the fetal blood. Some cationic nanoparticles can move toward fetal capillaries by simple diffusion, reflecting electrostatic interactions with cell membranes. Very small nanoparticles can pass ST cells through placental channels and enter the VS through the paracellular route.

In future, TPGD may be possible to manipulate, (i) fetal genomes of domestic animals, which are more difficult to manipulate than fetuses from small animals such a mice, and (ii) genomes of fetuses from animals for which in vitro cultivation systems are not fully established. In addition, it seems that TPGD and TPGD-GEF are still in the process of improvement but have a great potential as future fetal gene therapies.

More
© Text is available under the terms and conditions of the Creative Commons Attribution (CC BY) license; additional terms may apply. By using this site, you agree to the Terms and Conditions and Privacy Policy.
Upload a video for this entry
Information
Subjects: Genetics & Heredity
Contributor MDPI registered users' name will be linked to their SciProfiles pages. To register with us, please refer to https://encyclopedia.pub/register :
Shingo Nakamura
View Times: 885
Revisions: 2 times (View History)
Update Time: 31 Jul 2020
Table of Contents
1000/1000
Hot Most Recent