Submitted Successfully!
Thank you for your contribution! You can also upload a video entry related to this topic through the link below:
https://encyclopedia.pub/user/video_add?id=1877
Check Note
2000/2000
Fatty Acid Synthase
Edit
Upload a video
This entry is adapted from 10.3390/molecules25173935

Fatty acid synthase is a multi-enzyme protein that involves in fatty acid synthesis. It's main function is to synthesise palmitate, a 16-carbon long chain saturated fatty acid from acetyl-CoA and malonyl-CoA, in the presence of NADPH.

Cancer hallmarks were introduced by Hanahan et al. in 2010 and these hallmarks encompass six basic tumor characteristics—which are self-sufficiency in growth signals, insensitivity to anti-growth signals, tissue invasion and metastasis, unlimited replication potential, sustain angiogenesis, and evading apoptosis [1]. The whole paradigm was revised the following year to include metabolic reprogramming after a monumental effort had been spent on cancer metabolism studies [2]. Cancer metabolism was initially proposed by Otto Hendrich Warburg, termed Warburg’s effect, describing glucose consumption through glycolysis by cancer cells for ATP generation allowing tumor cell survival under aerobic condition [3]. In recent years, numerous studies have unraveled the dynamics of cancer metabolism and the concept of metabolic plasticity or metabolic rewiring of cancer cells was subsequently introduced. Apart from glucose utilization, cancer cells undergo various oncogenic mutations or adaptations to allow utilization of a more diverse range of nutrients including fatty acids (FAs) and amino acids for tumor survival, metastasis and disease progression. These findings have led to renewed interests to elucidate the diverse roles of lipid metabolism in cancer. This minireview aims to present current knowledge on fatty acid synthase FASN, its roles in cancer cell biology, metabolic reprogramming, and also the current challenges of FASN-targeted therapy.

FASN is a large multi-enzyme complex and the monomeric protein size is ~270 kDa. It comprises six separate enzymatic grooves that work together to produce a 16-carbon chain saturated fatty acid (FA) palmitate, from acetyl-coenzyme A (CoA) and malonyl-CoA in the presence of Nicotinamide adenine dinucleotide phosphate hydrogen (NADPH) [1]. The FASN monomer (Figure 1) possesses enzymatic activities which include beta-ketoacyl synthase (KS), acetyl/malonyl transacylase (AT/MT), beta-hydroxyacyl dehydratase (DH), enoyl reductase (ER), beta-ketoacyl reductase (KR), acyl carrier protein (ACP), and thioesterase (TE). Although the FASN monomer contains all the necessary enzymes needed for palmitate synthesis, the dimer formation is crucial for its function. The structure of FASN can be further categorized into three major domains where domain I contains KS, AT/MT and DH, domain II contains ER, KR and ACP, and domain III contains TE. About a quarter length of the monomer protein, located between domains I and II, which lacks catalytic activity, is called the interdomain/core region and is identified to be crucial for dimer formation [2]. 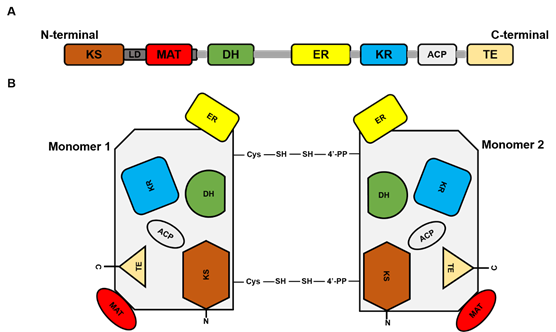 FASN expression is critical for early embryo development, in which FASN knockout (KO) embryos fail to survive before implantation and the number of FASN heterozygous pups is 70% lower than predicted by Mendelian Inheritance, which indicate partial haploid insufficiency [3]. Furthermore, FASN expression is shown to participate in the proper development of the fetal lung and the normal functionality of the adult lung. There is ample evidence demonstrating that the fetal lung is capable of de novo FA synthesis and that FASN is required for surfactant production of alveolar epithelial cells [4]. After early development, FASN remains relatively quiescent in most tissues, however the reason why this is so still remains elusive. A plausible explanation is that non-actively proliferating tissues can meet the FAs’ demand from the diet to fulfil their physiological FA requirements. Nonetheless, a strong FASN expression has been reported in the lung, breast, liver, adipose and brain [5].

Deletion of FASN in alveolar type II epithelial cells is found to disrupt surfactant lipid composition and exacerbate injury response to bleomycin-induced fibrosis [6]. The mature mammary gland is a unique lipid metabolizing tissue where, in resting-state, it does not require fatty acid synthesis but strongly induces FASN during pregnancy and lactation [7]. De novo FA synthesis in the mammary gland is responsible for producing short and medium chain FAs in milk, which account for ~15–40% of total FA content [8][9]. Mammary gland-specific FASN KO mice are shown to suffer from growth reduction in mammary epithelial cells, alteration of the FAs profile in milk from lactating mothers, and also improper development of the functional lactating mammary gland [10].

FASN is considered as a housekeeping protein in the liver under normal physiological conditions where it controls the hepatic triglyceride mechanism. When carbohydrates are abundant, glucose are converted to FAs with the help of FASN. Excess FAs are then assembled into triglycerides and stored in the form of lipid droplets or secreted as very low-density lipoproteins [11][12]. During fasting or under glucose-depleted conditions, lipid droplets undergo lipolysis or catabolism and fatty acid oxidation to produce ketone bodies which are then used as fuel [13]. In the brain, FASN is essential to maintain proper development and control lipid metabolism in neural stem cells. Neural stem cells are responsible, not only for early brain development, but also remain active for an entire life to ensure proper brain function. They divide and generate new nerve cells to enable the brain to adapt to new arrangements. Furthermore, disruption of lipid metabolism in neural stem cells, through the expression of a non-functional FASN, results in learning and memory deficits in humans and mice [14].

There is a clear difference in lipid metabolism between normal and tumor cells. Normal cells derive FAs exogenously while tumor cells derive FAs both exogenously and by de novo synthesis through FASN. Tumors or precursor lesions undergo excessive de novo FA synthesis irrespective of circulating lipid levels. In contrast to normal cells, almost all triacylglycerol FAs in tumor cells are derived from de novo synthesis [15]. Though de novo synthesis of FA and glycolysis in cancer are closely associated with elevated lipogenic and glycolytic enzymes activities [16], lipogenesis in cancer did not attract much interest among cancer biologists until the mid-1990s. Renewed interests in lipid metabolism started after the discovery of FASN, formerly known as oncogenic antigen-519, in breast cancer in 1994 [17]. Eukaryotes harbor two distinct FA synthesis systems [18]. FASN exists exclusively in the cellular cytoplasmic compartment and is referred to as the type I fatty acid synthesis system while the type II fatty acid synthesis system is present in mitochondria and termed mitochondrial FAS. Both systems produce two distinct products.

Mitochondrial fatty acid synthesis is functionally different from cytoplasmic fatty acid synthesis as it does not contribute significantly to cellular triglyceride storage or phospholipids. Furthermore, products from mitochondrial FAS cannot be substituted by delivery of FAs from extra-mitochondrial origin. The main product of mitochondrial FAS is lipoic acid, which is an important lipid co-factor for multiple mitochondrial dehydrogenases and is crucial for optimal mitochondrial function [19]. Up until now, little is known on mitochondrial FAS and its association with carcinogenesis. Extensive studies have focused on the cytoplasmic FA synthesis system, which is a type I FA system or FASN, and have sparked huge interests to investigate the roles of FASN in cancer. Like other proteins, FASN’s function is greatly affected by its localization, post-translational modification and protein–protein association. Although FASN has been frequently described as a cytoplasmic protein, it can also be found to localize in other intracellular compartments such as the nucleus [20] and membrane of peroxisomes [21].

More
© Text is available under the terms and conditions of the Creative Commons Attribution (CC BY) license; additional terms may apply. By using this site, you agree to the Terms and Conditions and Privacy Policy.
Upload a video for this entry
Information
Subjects: Biochemistry & Molecular Biology
Contributor MDPI registered users' name will be linked to their SciProfiles pages. To register with us, please refer to https://encyclopedia.pub/register :
Ali Azhar
View Times: 591
Revisions: 3 times (View History)
Update Time: 01 Sep 2020
Table of Contents
1000/1000
Hot Most Recent