Submitted Successfully!
Thank you for your contribution! You can also upload a video entry related to this topic through the link below:
https://encyclopedia.pub/user/video_add?id=1869
Check Note
2000/2000
Oral Cancer
Edit
Upload a video
This entry is adapted from 10.3390/ijms21176207

Chronic inflammation caused by infections has been suggested to be one of the most important cause of cancers. It has recently been shown that there is correlation between intestinal bacteria and cancer development including metastasis. As over 700 bacterial species exist in an oral cavity, it has been concerning that bacterial infection may cause oral cancer. However, the role of bacteria regarding tumorigenesis of oral cancer remains unclear. Several papers have shown that Fusobacterium species deriving the oral cavities, especially, play a crucial role for the development of colorectal and esophageal cancer. F. nucleatum is a well-known oral bacterium involved in formation of typical dental plaque on human teeth and causing periodontal diseases. The greatest characteristic of F. nucleatum is its ability to adhere to various bacteria and host cells. Interestingly, F. nucleatum is frequently detected in oral cancer tissues. Moreover, detection of F. nucleatum is correlated with the clinical stage of oral cancer. Although the detailed mechanism is still unclear, Fusobacterium species have been suggested to be associated with cell adhesion, tumorigenesis, epithelial-to-mesenchymal transition, inflammasomes, cell cycle, etc. in oral cancer.

Oral cancer, predominantly oral squamous cell carcinoma (OSCC), is a significant health problem and is regarded as the main cause of death from oral diseases in many countries. Traditional risk factors of oral cancer include alcohol abuse, tobacco and tobacco-derivate chewing, and oral virus infections. Other factors include infections, exposure to ionizing radiation, and environmental pollutants [1]. Thus, various causes of cancer are known to be closely involved in lifestyle choices, such as smoking, drinking, and diet.

Chronic inflammation caused by infections has been suggested to be one of the most important cause of cancers [2]. Indeed, infection of various viruses, bacteria, and parasites, such as Hepatitis B virus (HBV), Hepatitis B virus (HCV), Epstein–Barr virus (EBV), human papilloma virus (HPV), human herpes virus 8 (HHV8), human thymus-derived-cell leukemia/lymphoma virus-1 (HTLV-1), human immunodeficiency virus (HIV), Helicobacter pylori, Schistosomiasis, and liver flukes are well-known causes of cancer [2]. Recently, commensal bacteria are also involved in carcinogenesis. A huge number of different commensal bacteria naturally colonize in the human body in a relatively stable equilibrium. Microbial-immune network correlates gut bacteria with the whole-body health, and the failure of immune homeostasis manifests significant impact on various diseases, which might result in cancer [3][4][5]. Indeed, some commensal bacteria including Peptostreptococcus anaerobius [6], enterotoxigenic Bacteriodes fragiles [7], and Escherichia coli [8] are involved in carcinogenesis of colorectal cancer (CRC).

In the oral cavity, bacteria, fungi, viruses, and archaea naturally colonize in different habitats including the teeth, gingival sulcus, tongue, cheeks, hard and soft palates, and tonsils. The oral microbiota refers to a highly varied and complicated ecosystem of these organisms. Over 700 bacterial species are endemic to the oral cavity, and indigenous oral flora act to prevent the settlement of foreign bacteria. Some bacteria of the oral cavity are harmful and can cause serious disease, while many of the oral bacteria are in fact beneficial in preventing diseases. Thus, the oral cavity is inhabited by complex multispecies bacterial communities that usually exist in a balanced immunoinflammatory state with the host [9]. It is now established that many chronic inflammatory conditions are caused by an imbalance between host–microbiota interactions, resulting in a dysbiotic community, deregulated immune responses, and eventually disease outcomes [10]. Oral commensal bacteria play a critical role in the development of oral diseases, including periodontal disease and tooth loss, and maintenance of a normal oral physiological environment [11][12]. Moreover, oral commensal bacteria are known to be involved in the pathogenesis and development of systematic diseases, such as pneumonia, cardiovascular diseases, diabetes, dementia, etc. It has been of concern that oral commensal bacteria may be involved in the pathogenesis of OSCC [13][14]. However, it remains unclear the role of bacteria regarding carcinogenesis of OSCC, even though a lot of bacteria inhabit in the oral cavity. Interestingly, it recently has been shown that one of oral commensal bacteria, Fusobacterium species, especially, play a crucial role for the development of CRC [15][16][17]. As Fusobacterium species are commensal bacteria in the oral cavity, the cumulative evidences of Fusobacterium species in CRC make us hypothesize that Fusobacterium species may be involved in the pathogenesis and development of OSCC.

There are many reports showing that Fusobacterium were detected in OSCC tissues [18][19]. The ratio between aerobes and anaerobes within the biofilms on the surfaces of OSCC tissues was approximately 1:2, whereas that in the healthy control was 2:1, indicating that OSCC surfaces provide an important reservoir for anaerobic bacteria [20]. F. nucleatum subsp. polymorphum was the most significantly overrepresented species in OSCC compared to the control group with deep-epithelium swabs [21]. Perera et al. also reported that the Fusobacterium was enriched in OSCC biopsy compared to fibroepithelial polyp as a control [22]. Moreover, significantly greater bacterial diversity was observed in the swab of OSCC sites than that of normal sites [23]. Thus, distribution of bacteria including Fusobacterium in OSCC tissues may be distinct from that in healthy oral mucosal tissues. Yang et al. reported that F. periodonticum and several bacteria in oral rinse samples were associated with OSCC, and they progressively increased in abundance from stage I to stage IV [24].

It has been shown that there are specific associations among bacteria within dental plaque by cluster analysis using subgingival plaque samples [25][26]. As shown in Figure 1, various bacteria exist as shown in the pyramid. F. nucleatum is in the middle of pyramid. Among the species in the middle of pyramid, F. nucleatum is dominant in the dental biofilm at a later stage of plaque formation. As described above, Fusobacterium infection affects the tumorigenesis and development of OSCC through various responses (Figure 1). However, the target molecules of Fusobacterium are still unknown. Further studies will be required for clarifying the evidence of Fusobacterium involvement in tumorigenesis and development of OSCC. 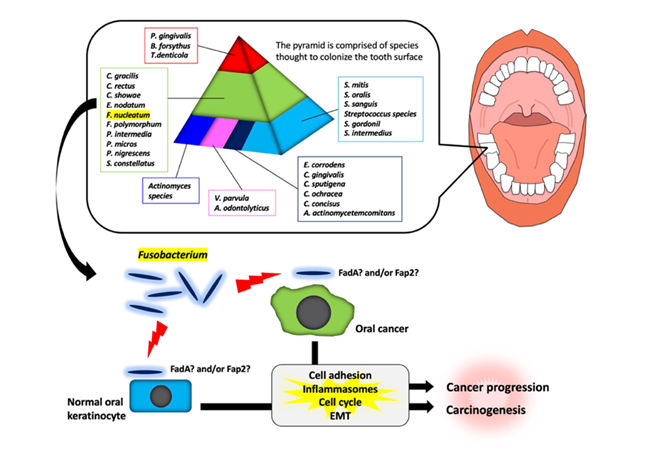 Figure 1. Schematic model for the involvement of Fusobacterium species in oral carcinogenesis and cancer progression. In a dental plaque, various bacteria exist as shown in the pyramid. The base of the pyramid is comprised of species thought to colonize the tooth surface and proliferate at an early stage. Then, complex species in the middle of pyramid becomes numerically more dominant later and is thought to bridge the early colonizers. Finally, the complex species in the top of the pyramid numerically more dominant at late stages in plaque development. Among them, Fusobacterium species may adhere with oral keratinocyte or oral cancer cells via interaction between FadA/Fap2 and E-cadherin. This interaction may induce carcinogenesis and cancer progression.

More
© Text is available under the terms and conditions of the Creative Commons Attribution (CC BY) license; additional terms may apply. By using this site, you agree to the Terms and Conditions and Privacy Policy.
Upload a video for this entry
Information
Subjects: Oncology
Contributor MDPI registered users' name will be linked to their SciProfiles pages. To register with us, please refer to https://encyclopedia.pub/register :
Yasusei Kudo
View Times: 241
Revisions: 4 times (View History)
Update Time: 27 Oct 2020
Table of Contents
1000/1000
Hot Most Recent