Submitted Successfully!
Thank you for your contribution! You can also upload a video entry related to this topic through the link below:
https://encyclopedia.pub/user/video_add?id=1850
Check Note
2000/2000
TILs in rabbit mammary carcinomas
Edit
Upload a video

Tumor infiltrating lymphocytes (TILs) are key components of the tumor microenvironment that mediate the anti-tumor immune response. In breast cancer of humans, TILs represent prognostic and predictive biomarkers. For their standardized evaluation in routinely (hematoxylin and eosin) stained tissue sections, international guidelines exist. Recently, TILs have also been analyzed in pet rabbit mammary carcinomas according to these international guidelines. Results of the study on rabbit mammary carcinomas showed a statistically significant association between higher TIL numbers in stromal TIL hotspot areas and microscopic parameters indicative of a better tumor differentiation, i.e. decreased mitotic count, lower histological tumor grade and higher percentage of calponin positive tumor cells. These findings suggest that in rabbit mammary carcinomas TIL hotspot areas may exert an influence on the biological behavior of these tumors. The present study contributes to comparative pathology. In addition, it provides the basis for further investigations into the impact of TILs on clinical parameters of pet rabbit mammary carcinomas.

Nowadays, rabbits are popular pets[1] and mammary carcinomas are quite commonly diagnosed in does.[2][3] In women, breast carcinoma is worldwide the most frequent cancer type.[4][5][6]

Studies revealed comparative features of mammary tumors of pet rabbits and breast cancer in humans, and pet rabbits have been proposed as suitable animal models for certain types of breast cancer.[3][7][8]

Majority of breast cancer cases in humans[4] and mammary carcinomas in pet rabbits[7][8][9][10] are histologically diagnosed as invasive adenocarcinomas. The histological grading scheme of Elston and Ellis[11] is used to determine the differentiation of mammary carcinomas in humans[12] as well as in rabbits[7][9]. Immunostaining for estrogen receptor-α (ER-α) and progesterone receptor (PR) reveals expression of these hormone receptors in molecular subtypes of human[4][12] and in rabbit mammary carcinomas.[7] The disease affects most frequently middle aged to older individuals: In women, 80% of breast cancer cases are diagnosed at an age ≥50 years,[5][13] and the average age of does with mammary carcinomas is 4.9-5.5 years.[7][9][10] The reproductive age of female rabbits starts with 4-6 months, and the life expectancy of pet rabbits is 6-13 years.[14] In rabbits, elevated serum prolactin concentrations are associated with benign proliferative mammary gland lesions,[15][16][17] that may undergo neoplastic transformation in rare cases.[17] In women a rise in prolactin for a longer duration represents a predisposing factor for breast cancer development.[18] Investigations into mammary tumor development in breeding colonies of rabbits showed clustering in distinct families suggesting a genetic predisposition.[19] In humans, familial breast cancer accounts for approx. 7% of all breast cancer cases,[20] and it is in 25% attributed to mutations in breast cancer gene 1 and 2 (BRCA 1; BRCA 2).[6]

Close similarities between the immune system of rabbits and humans[21][22] facilitate the use of the rabbit in translational immunological studies,[21][22][23][24]that include immuno-oncological research.[25][26]

The fate of a tumor (regression, progression, metastases) is markedly influenced by the hosts immune response that include components of the innate and adaptive[25][27] of tumor infiltrating lymphocytes (TILs) without subclassification has prognostic significance[28][29][30] and can aid in treatment decisions.[28][29][31] International guidelines facilitate a comparison between different studies.[28][29]

The study of Schöniger et al.[32] examined TILs in hematoxylin and eosin stained sections of 107 pet rabbit mammary carcinomas according to guidelines established for breast cancer in humans.[28][29]

TIL evaluation encompassed stromal lymphocytes and plasma cells,[32] whereas stromal TILs are defined as stromal area occupied by TILs related to the evaluated stromal area of a tumor.[28][29] TILs were examined using the 20x objective on a Zeiss microscope A1.[32] For each case, the average percentage of TILs over the entire stromal area as well as the maximal and minimal number of TILs per 20x objective field of view (FOV) were determined.[32] Analyses were performed separately for the central tumor (CT) area and the invasive margin (IM).[32] The latter is defined as 1mm wide zone centered on the outermost margin of the tumor cells.[29] Results from the TIL evaluation were statistically correlated with those histological and immunohistochemical findings that may influence the biological behavior of mammary carcinomas, i.e. proliferative activity, tumor differentiation, ERα and PR status as well as calponin expression in tumor cells;[32] these data were obtained from the diagnoatic records.[7][8] For evaluation of the proliferative activity, tumor cells with mitoses were counted in ten 40x objective FOVs.[7] To examine the degree of tumor differentiation, the histological tumor grade was determined[7] using the 3-tier grading system of Elston and Ellis.[11] The ERα and PR status and calponin expression were assessed by immunohistochemistry.[7]

Results showed that the majority of pet rabbit mammary carcinomas contained 1-10% average stromal TILs in the CT and at the IM (Figure 1).[32] 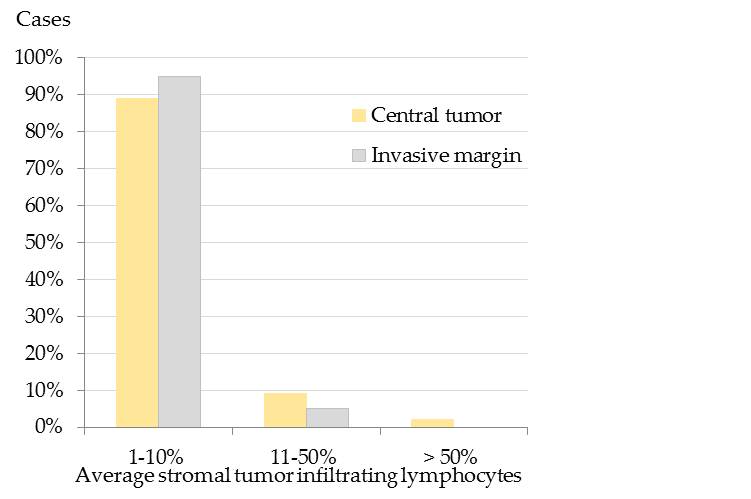 Stromal TILs often displayed spatial aggregations within the stroma (Figure 2), that was slightly more prominent within the CT than at the IM.[32] At the IM, TILs were mostly located in the stroma adjacent to invasive tumor cell nests.[32] The spatial clustering, that was verified by the calculation of the difference of maximal and minimal percentages of stromal TILs per 20x objective FOV[32]  is visualized in Figure 3. 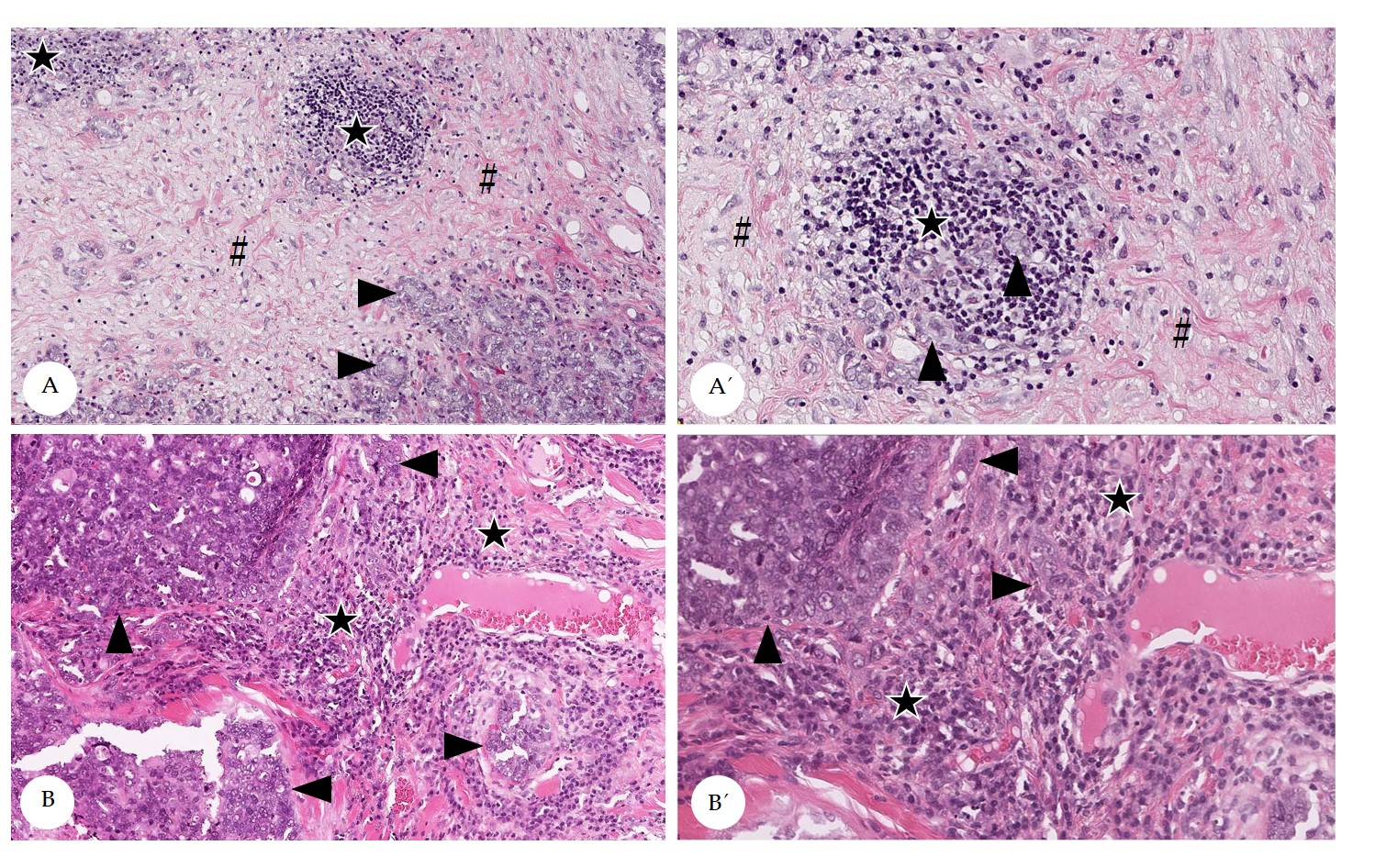 Figure 2. Spatial distribution of stromal tumor infiltrating lymphocytes (TILs) in pet rabbit mammary carcinomas. Depicted are representative examples for a heterogenous (A) and a homogenous distribution (B) of stromal TILs. A´ and B’ depict areas from A and B in higher magnification. Heterogenous distribution of stromal TILs is attributed to the formation of hot spots (A,A’), whereas homogenously distributed TILs diffusely occupy the stroma (B,B´). Stromal areas with TILs are labelled by stars, those without TILs by hash keys. Tumor cell nests are marked by arrowheads. 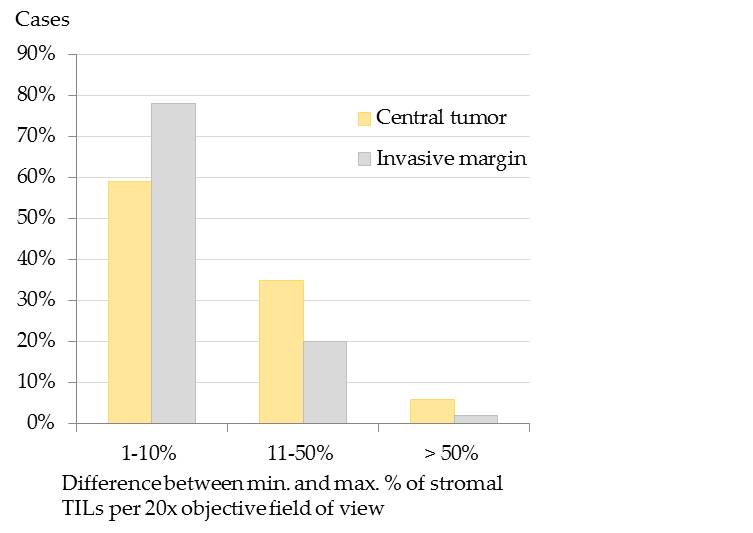 Moreover, in the CT an increased maximal percentage of stromal TILs per 20x objective FOV was statistically associated with histological parameters suggestive of a better tumor differentiation, i.e. a reduced mitotic rate, a lower tumor grade and an increased percentage of calponin positive tumor cells. The latter was also significantly correlated with higher average percentages of stromal TILs in the CT and at the IM.[32] 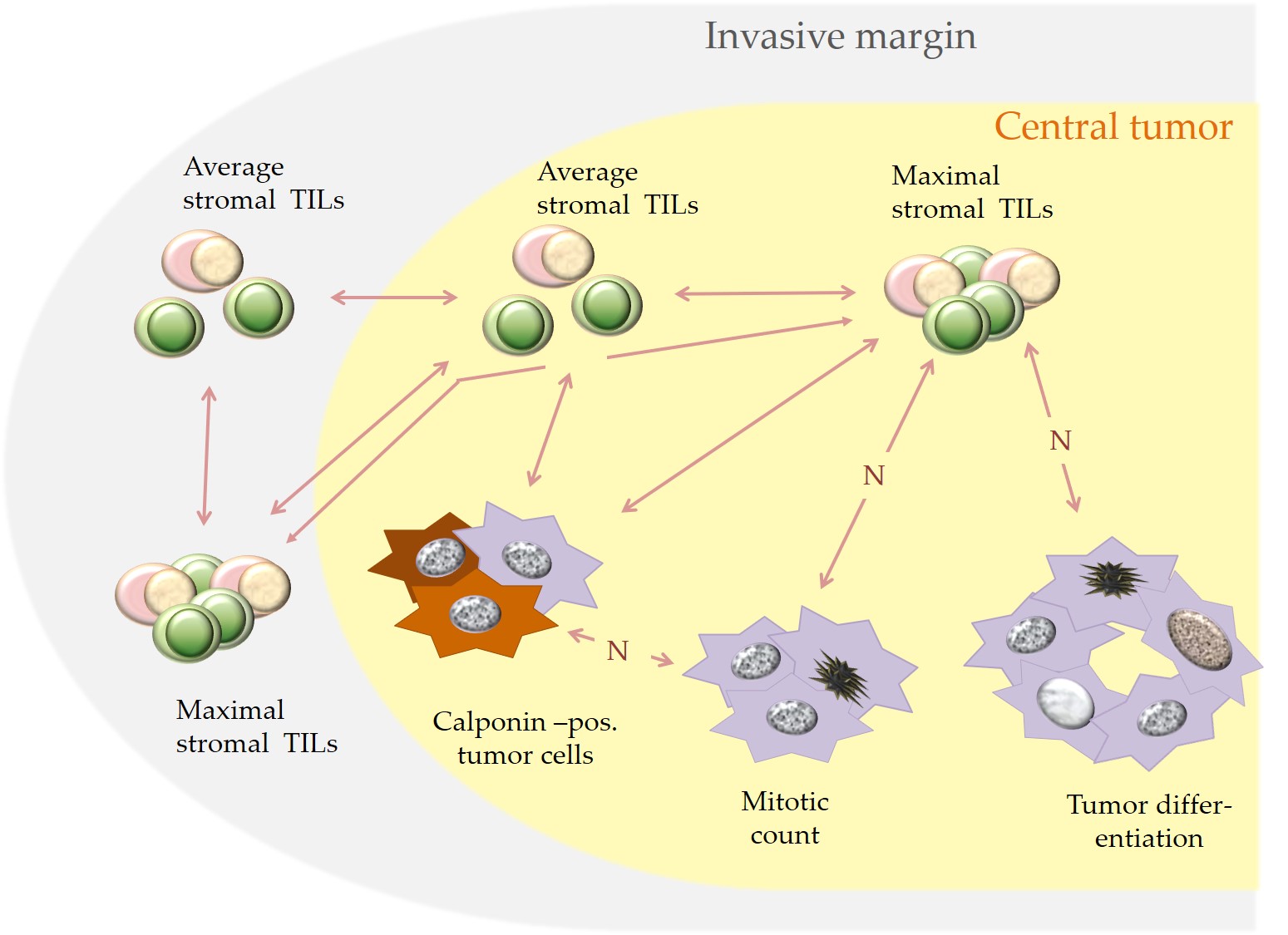 Figure 4. Depicted are statistically significant associations (bilateral arrows) that were detected in pet rabbit mammary carcinomas between increased stromal TILs and specific histological and immunohistological parameters. A negative correlation is labelled with “N”.

Results of the study of Schöniger et al.[32] confirm that the guidelines for TIL evaluation on human tumors[28][29] can be applied to rabbit mammary carcinomas as well.

Calponin is regarded as tumor suppressor protein.[33][34] By binding to the actin cytoskeleton and by interacting with signal transduction pathways, it promotes cell adhesion, reduces cellular motility, and inhibits cell division.[33][34] In rabbit mammary carcinomas, a likely favorable impact of calponin expression in tumor cells is further supported by the findings that a higher percentage of calponin positive tumor cells was significantly related to a lower mitotic count[8][32] and a better tumor differentiation.[8]

This leads to the hypothesis that also in rabbit mammary carcinomas the tumor microenvironment influences the biological behavior of the tumor. In rabbit mammary carcinomas TIL hot spot areas likely contribute to sculpturing the anti-tumor immune response. In human cancers, not only average percentages of stromal TILs,[28][29] but also their spatial arrangement can have prognostic relevance and thus may assist in patient stratification.[35][36]

The contents of this topical review are summarized in Figure 5. 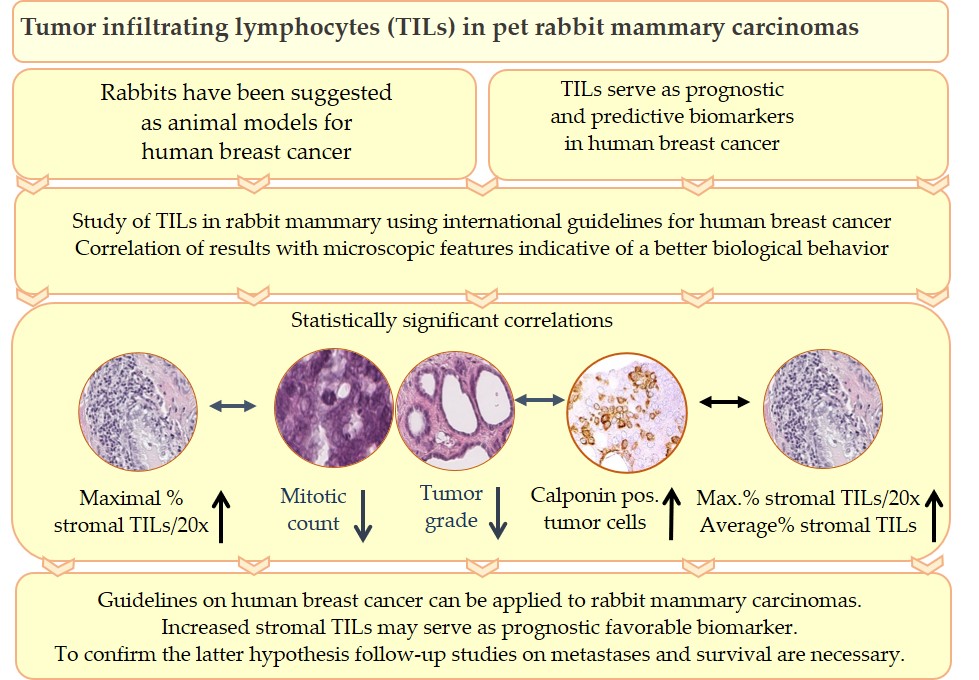 More
©Text is available under the terms and conditions of the Creative Commons-Attribution ShareAlike (CC BY-SA) license; additional terms may apply. By using this site, you agree to the Terms and Conditions and Privacy Policy.
Upload a video for this entry
Information
Subjects: Others ; Oncology ; Immunology
Contributor MDPI registered users' name will be linked to their SciProfiles pages. To register with us, please refer to https://encyclopedia.pub/register :
Sandra Schöniger
View Times: 333
Revisions: 8 times (View History)
Update Time: 27 Oct 2020
Table of Contents
1000/1000
Hot Most Recent