+1 point
Thank you for your contribution! You can also upload a video entry related to this topic through the link below: https://encyclopedia.pub/user/video_add?id=17877
Check Note
2000/2000
Biomarker Studies in Stress Biology

Endpoints assessed at the population or community level are most often the result of the sum of effects on individuals, arising from the effects at the cellular and molecular levels. Within this framework, these lower biological level endpoints are more responsive at an early stage of exposure, making them potential toolboxes to be used as early-warning markers to address stress. Given this, by linking responses and understanding organisms’ metabolism and physiology, the possibilities for the use of biomarkers in stress biology are vast.

1. Introduction to Stress Biology and Biomarkers

Since the early days of mankind and sky rising after the industrial revolution, freshwater, marine, and terrestrial ecosystems have been subjected to a myriad of contaminants and consequent impacts, prompting the need for the establishment of pollution control regulations and monitoring programs. First focused on chemical and microbiological analysis, it was clear that these alone were not sufficient to monitor and protect aquatic ecosystems, and thus the need to develop tools capable of assessing not only the presence of pollutants in the water, but also, and most of all, their latent effects on organisms, their populations, and communities was paramount [1]. To contribute to the environmental health assessments and eventual impact of pollutants, assemblages and diversity of fish, invertebrates, algae, and macrophytes have been used as bioindicators of pollution and water quality for several years to date [2][3][4][5] and are important elements of government regulations and ecological risk assessment (ERA) (e.g., [6][7]).
By using these high levels of biological organization, this type of assessment is therefore highly robust and relevant, and easy to apply and interpret. Using them, it is possible to evaluate the direct effects of anthropogenic or natural disturbances on the structure and/or function of an actual community of aquatic organisms, which cannot be observed when using lower levels of biological organization [8][9]. However, by addressing populations and communities, the specific causes of the observed effects may not be assessed. These, being longer-term effects, may include a temporal gap between the cause and effects that may be difficult to interpret. Also, the predictive capacity of those measurements is restricted because repeatability is difficult, and they may not clearly distinguish between a polluted site and a naturally impoverished one. Despite the relevance of such a level of organization assessment, the major drawback with this approach is that ecologically important effects such as impairment in growth, behaviour, reproduction, death, or even taxa losses, will have already occurred prior to being detected at the population and community levels [10].
It is in this framework that modern ecotoxicology thrives, as the scientific discipline combining methods of ecology and toxicology to study the effects of environmental stressors, i.e., environmental conditions deviating from species optima, while the relevance of responses is paramount to strengthen this field. 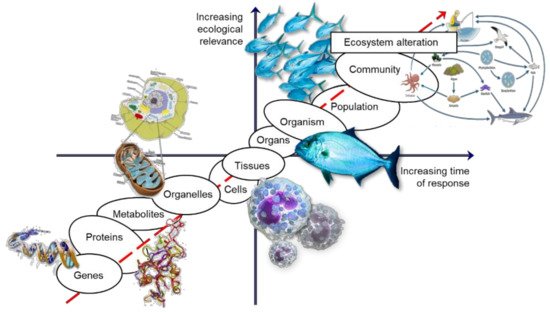 Figure 1. The biological organization continuum, relationship between temporal scale of response and ecological relevance after stress exposure (adapted from Lemos et al. 2010 [9]).
Within this framework, biomarkers arise as a resourceful sub-individual tool in ecotoxicology. As with many other techniques applied in environmental sciences, arising from health science as a “characteristic that is objectively measured and evaluated as an indicator of normal biological processes, pathogenic processes, or pharmacologic responses to a therapeutic intervention” [12] or a “chemical, its metabolite, or the product of an interaction between a chemical and some target molecule or cell that is measured in the human body” [13], biomarkers are presently well established to address the biological effects of environmental contamination.
Similar to everyday use of body temperature, used as a proxy for fever, or even cholesterol that is acknowledged as a biomarker of cardiovascular risk, many are the endpoints that may be considered in other disciplines other than public health, including environmental sciences, where the use of biomarkers was initially promoted in the 1990s.
The environmental biomarkers can then be defined as “any biological response to an environmental chemical at the below individual level, measured inside an organism or in its products (urine, faeces, hairs, feathers, etc.), indicating a departure from the normal status, that cannot be detected from the intact organism” [14], or following Depledge [15] defined as a “biochemical, cellular, physiological or behavioural variation that can be measured in tissue or body fluid samples or at the level of whole organisms, to provide evidence of exposure and/or effects from one or more contaminants”. Both definitions, for modern purposes, should replace “chemical agents” by “stressor” to include other biotic and abiotic features that impact organisms. They are used to characterize stressors’ mode of action, to establish cause–effect relationships, to point to the presence of a certain group of contaminants, and for environmental health monitoring [16]. As already identified, in environmental studies and decision-making, the use of these endpoints is frequently critiqued for their limited ecological relevance as of unknown ecological significance of many sub-cellular responses [9]. This means that a sole significant response of a sub-individual endpoint may prove to be meaningless (or of limited scope, solely indicating exposure) and the cornerstone challenge is to find relationships between these biomarkers and ecologically relevant parameters, and thus obtain the full power of biomarkers as endpoints with high probability to be early warning signals of what may happen in the future to the population/community, while also enabling us to dig deep into a stressor impact mechanistic understanding.
One of the most comprehensive examples includes the biomarker acetylcholinesterase (AChE; EC 3.1.1.7). This may be included in a group of neurotoxicity biomarkers which may give a sign of neuromuscular disorder when addressing the acetylcholine receptor-ion channel complex (AChR) of skeletal muscles. Briefly, the nervous impulse passes when the molecule acetylcholine travels through the axons from the presynaptic membrane to the postsynaptic membrane. At the postsynaptic membrane it connects to a receptor opening an ion channel and the nervous impulse passes through. When the enzyme acetylcholinesterase catabolizes acetylcholine in choline and acetate, the receptor-acetylcholine complex is broken and the nervous impulse stops. Thus, AChE acts as a key of this nervous impulse and has a paramount role as a neuromuscular mediator. As a case study on the use of this biomarker, one may recall to the work of Venkateswara Rao et al. [17] addressing the effects of organophosphates in the brine shrimp, Artemia salina. In this study, Chloropyrifos, Profenofos, Monocrotophos, and Acephate were used as exposure media in the laboratory, and AChE activity was evaluated. For all tested organophosphates, there was a significant inhibition of AChE. Notwithstanding, despite this activity inhibition, one can argue about what does it mean and what it might represent in the biomarker world and shout a “so what?”—as stated before, the low relevance of this level is generally weakly linked to any meaningful real ecological impact. To establish a probabilistic relation with relevant scenarios, this study’s authors monitored the brine shrimp’s behaviour in an arena through video-tracking, where endpoints such as distance travelled, and speed were recorded after exposure to the organophosphates. Authors found a significant reduction in distance travelled and speed in those brine shrimp exposed to the compounds. By linking the AChE inhibition to impaired behaviour, one may now argue about the usefulness of this biomarker, as this link through these levels of biological organization may imply that enzyme inhibition may lead to behavioural impairment and when an organism moves in an increasingly less coordinated way, it will diminish the chances to find food or escape predators (e.g.,) and thus having impacts on survival, growth or reproduction and thus the implicated effects on population numbers and dynamics.
With this example, relevance to a low level of biological organization is given by linking probabilistically to higher levels of biological organization, while maintaining the backbone of the biomarkers’ advantage; that is, to give earlier responses while providing a mechanistic overview of the effects.
The aforementioned example is transversal to a myriad of environments and taxa, with many other authors also establishing such model links, such as with the bivalve Corbicula fluminea, exposed to the pyrethroid insecticide bifenthrin [18], or the common prawn Palaemon serratus exposed to deltamethrin [19], or the freshwater Daphnia magna exposed to chlorpyrifos [20], or the coho salmon Oncorhynchus kisutch exposed to chlorpyrifos [21], or even in the terrestrial environment the earthworm Eisenia fetida exposed to atrazine [22], or the carabid beetle Pterostichus cupreus [23], or the common shrew Sorex araneus [24], exposed to dimethoate, just to give few examples and all linking AChE to behaviour and establishing consequent causal effects at higher levels.
Still, much can be discussed and studied about the degree to which a given impact at a certain level will increase the chance of having effects also at the following level—and this is paradigmatic for biomarkers, as a whole, and definitely one of the biggest challenges for its use for regulatory purposes.

More
© Text is available under the terms and conditions of the Creative Commons Attribution (CC BY) license; additional terms may apply. By using this site, you agree to the Terms and Conditions and Privacy Policy.
Upload a video for this entry
Information
Subjects: Biology; Biochemistry & Molecular Biology; Biodiversity Conservation
Contributor MDPI registered users' name will be linked to their SciProfiles pages. To register with us, please refer to https://encyclopedia.pub/register :
Marco F. L. Lemos
View Times: 146
Revisions: 3 times (View History)
Update Time: 10 Jan 2022
Table of Contents
1000/1000
Hot Most Recent