Submitted Successfully!
Thank you for your contribution! You can also upload a video entry related to this topic through the link below:
https://encyclopedia.pub/user/video_add?id=17534
Check Note
2000/2000
Applications of Chitin in Agricultural Industries
Edit
Upload a video

Chitin can play a key role in the agricultural industry due to its water-soluble nature. The different applications of chitin in the agricultural industry have been well documented with even more novel processes still in development. Some of those would include, but are not limited to, being used as fertilizers, soil conditioning agents, plant disease control agents, antitranspirants, fruit retardants, and seed coatings. Furthermore, chitin can increase the natural defense mechanisms in plants by upregulating plant growth regulators, growth stimulants, anti-stress agents, and elicitors for the production of secondary metabolites.

Chitin formation is controlled by an enzyme known as chitin synthase that actively binds monomers of N-acetyl-glucosamine to form chitin polymers [1]. A schematic representation of N-acetyl-glucosamine formation into the chitin polymers has been shown in Figure 1. This polymer plays an integral part in fungal pathogenicity. Even though plants do not produce chitin directly, they do secrete enzymes that are involved in the breakdown of chitin [2][3][4]. This characteristic is important, as the host plant relies on the number of chitinases secreted from plant cells to resist pathogens [2][3][4]. Consequently, chitin fragments are released from the fungal cell wall, which induces plant defense mechanisms that help with protecting the host plant from fungal pathogens [2][3][4]. Following this, researchers understood that increasing the expression of chitinase in plants would impart noticeable resistance to fungal pathogens [2][3][4]. The genes that control the expression of a plant’s innate defense mechanism have been previously studied and have shown that chitooligosaccharides are important in the controlled expression of plant genes [2][3][4]. Overall, plant disease resistance arises from chitin’s unique ability to control the signal transduction pathway to promptly fend off pathogens [2][3][4]. 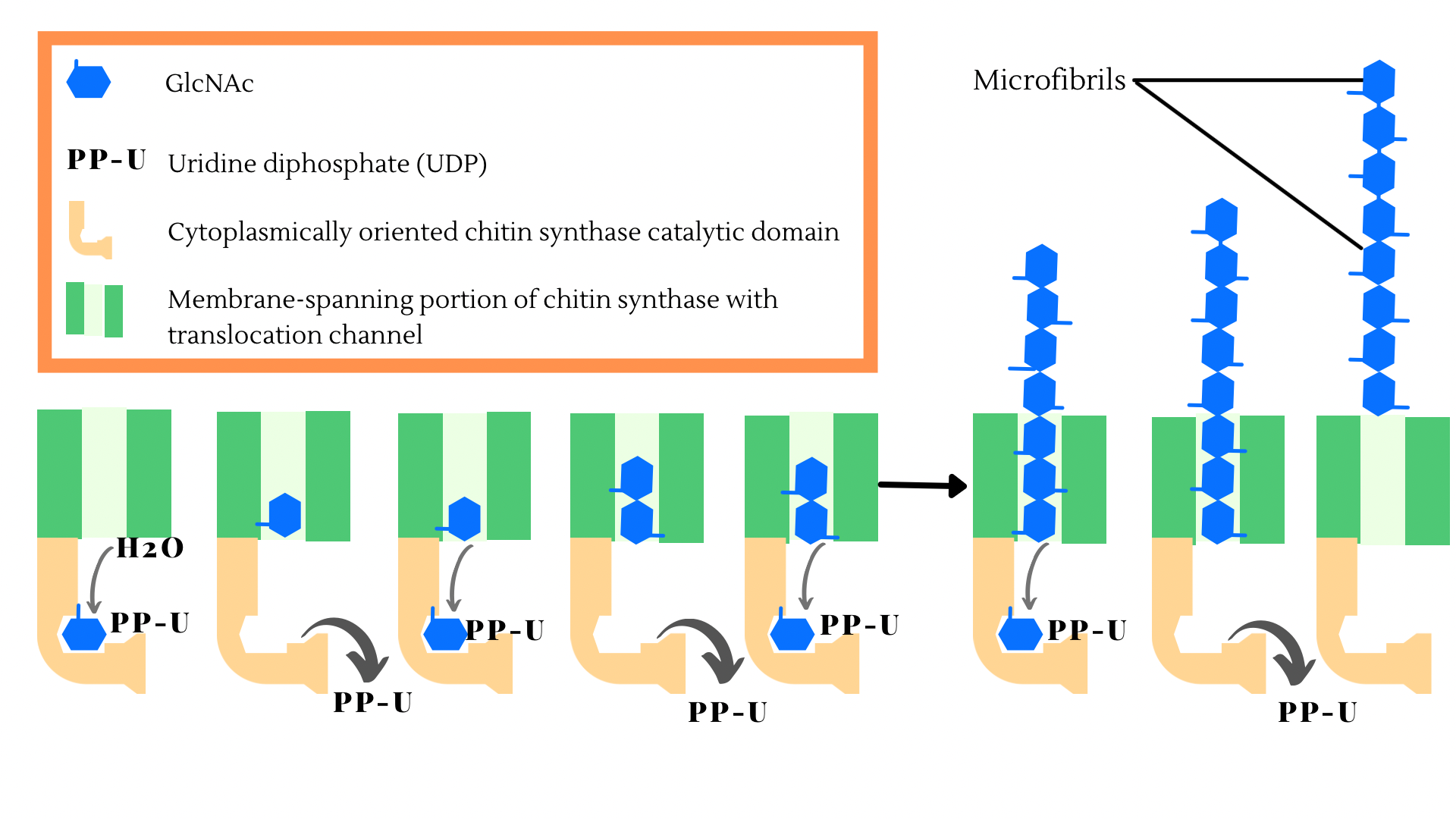 Figure 1: Schematic representation of N-acetyl-glucosamine formation into the chitin polymers.
The class of chitinases known simply as class I chitinases reside in high levels in vacuoles when the host plant is wounded or infected by a pathogen [4][5]. When wanting to create a transgenic plant using genes from other plants and placing those same genes into different plant species, chitinase has increased pathogen resistance in various plant species [4][5]. Species including tobacco, tomatoes, carrots, cucumbers, pickled cucumbers, rice, grapes, apples, potatoes, and broccoli were all transformed by chitinases from Trichoderma harzianum, a parasitic fungus that resulted in the plants showing resistance to various other pathogens [4][5]. After implementing the transgenic chitinase model into other plants, more studies were developed to truly test the limits of the degradation enzyme as a plant defense mechanism. The effects of over-expression of class I chitinase genes to enhance resistance in cacao, a raw ingredient for chocolate, against the pathogen Colletotrichum gloeosporides were studied [4][5]. The study over-expressed the gene TcChil that was obtained from Agrobacterium and performed an in vivo bioassay with the detached left of Theobroma cacao L. that was infected by Colletotrichum gloeosporioides [4][5]. The level of chitinase was measured using in vitro fluorometric assay, which determined that the transgene in the transgenic lines were expressed almost six times more than the non-transgenic lines’ and the control plant’s levels of chitinase [4][5]. Visual evaluation was determined by performing a leaf disk bioassay, which illustrated that the TcChil transgenic leaves limited the growth of fungus significantly when compared to the leaves of the control plant, which saw more leaf necrosis [4][5].
Plant defense mechanisms are not only localized to chitinases activity, but also have a wide variety of different immune responses that are set in place to slow down and halt pathogen proliferation [6][7]. Such responses are initiated through conserved ligands that activate specific receptors, triggering cascading responses that slow down or diminish the pathogens’ ability to spread within the host [6][7]. Pathogens that do bypass this response can deliver their effector proteins into the host cell’s cytoplasm, essentially taking over the host benefitting the pathogen [6][7]. Effector proteins that inhibit pattern-triggered immunity cause plants to use alternative mechanisms, such as intracellular immune receptors set in place to identify effector proteins by triggering cell death as an appropriate response [6][7]. The best-known cell-surface localized receptor is CERK1, a chitin receptor, which recognizes bacterial infections and triggers immunity in plants [6][7]. To test the importance of the receptor, a recent study looking at the effects of receptor-like kinases in other species of plants to determine if they have the same properties as CERK1-like receptors that control plant immunity [8]. It was determined that PsLyk9 was upregulated when Pisum sativum detected a pathogenic fungi infection and that the gene could be a possible candidate for a CERK1-like receptor found in the pea genome [8]. An increase in the rate of infection was reported as resulting from fungal pathogens in those plants that had their genes knocked out and downregulated [8]. Furthermore, levels of defense-response genes were lower in Pisum sativum root when PsLyk9 was downregulated [8].

The interest surrounding the different applications of chitin and its derivatives has allowed researchers to further investigate the polysaccharide’s involvement in different agricultural practices. The use of chemical fertilizers for plant growth has been the gold standard for many farms around the world, but these agrochemicals have resulted in countless problems, including decreased soil fertility, biodiversity loss, environmental damage, and water and food pollution, which have been linked to serious human health concerns [9][10]. Due to the environmentally damaging nature of chemical fertilizers, many have started to switch to more eco-friendly fertilizers in crop production [9][10]. Furthermore, research is currently being performed at an accelerated rate to develop natural plant growth regulators for exceptionally sustainable agriculture for future practices [9][10]. Water-soluble oligosaccharide fragments obtained by grinding chitin and its derivatives have been hypothesized as a substitute, being considered by the scientific community as the best natural plant growth stimulant that is non-invasive [9][10]. These water-soluble oligosaccharide fragments are viewed to have a profound effect on fruit weight, fruit yield, plant height, leaf numbers, overall increased biomass, canopy diameter, spike number, increased seed germination, and growth in flower species [10][11]. These effects can be attributed to the short-chain oligomers of chitin, roughly 6–7 oligomers in length, producing lower reactive oxygen species in plants than larger chitin oligomers [12]. Moreover, short-chain oligomers of chitin that bind to lipids (lippchitooligosaccharides, LCOs) and nodulation factors originating from symbiotic bacteria and fungi have been shown to increase plant growth early in development [12].
The practical applications of chitin on crop growth come in various forms for improving soil quality and plant growth [13][14]. Simply put, treating the soil with chitin has been known to lower the rate of infection of nematodes on plant roots and to further increase suppressiveness against many soil-borne fungal pathogens [13][14]. Furthermore, the suppressive nature of chitin added to the soil often causes changes to beneficial microbiota in the soil and rhizosphere that directly favor plant development [13][14]. Many studies have concluded that rhizosphere organisms not only have a beneficial effect on plant growth, but also have a positive impact on nitrogen-fixing bacteria and mycorrhizal fungi [13][14]. In addition, chitin can increase the positive effect that rhizosphere organisms have on plants by further proliferating growth [13][14]. Biomass significantly increased and the growth of Salmonella enterica on lettuce greatly decreased. However, Escherichia coli survival was lower, although the results were not significant [13][14]. Moreover, the concentrations of chitin added to the soil produced a dramatic increase of other bacterial and fungal genera, which control plant growth, the nitrogen cycle, and chitin degradation [13][14].

Pest management, through various insecticides, such as organophosphates, carbamates, and pyrethroids, has an important role in protecting crops by decreasing the rate of disease transmission [15][16]. However, the use of these chemicals can present major environmental and health risks. Therefore, there is an increased desire to develop eco-friendly insecticides through different non-invasive building materials like chitin [15][16], and recently developed analytical methods could be applied for its identification [17]. Aforementioned, chitin can be found in the cuticles of insects. However, even though plants cannot produce chitin directly, the biopolymer can be used for various signaling pathways to create an alternative insect-specific insecticide [15]. With this knowledge, the development of chitin synthesis inhibitors (CSI) impedes the biosynthesis of chitin in insects, acting as an effective integrated pest management system [15].
Benzoylphenyl ureas, a common CSI, represent an inhibitor that interferes with chitin deposition [15]. Their effect on chitin varies as there are more than 10,000 different types of benzoylphenyl ureas and 15 benzoylphenyl ureas currently out on the market, but the overall effect is the same for dealing with sanitary insect pests [15]. The benzoylphenyl urea insecticide diflubenzuron, otherwise known as DFB or Dimilin, is a CSI that inhibits a key development process in insects known as molting [18][19]. The pervasive characteristic of molting is important to the life cycle of insects as it allows them to grow [20]. More precisely, molting is triggered by different circumstances, like a change in size that marks the transition between the end of the larval growing phase and the formation of the adult exoskeleton [20]. The compound diflubenzuron seemingly prevents the formation of the cuticle, which is largely made up of chitin, affecting the procuticle layers and causing abortive molting [18][19]. To understand the wider range of effects of diflubenzuron, a study was performed on a known pest Tribolium castaneum, otherwise known as the red flour beetle [18][19]. The study fed both larvae and adult beetle wheat that had different concentrations of diflubenzuron. The observable result showed abortive molting, hatching defects, and lower levels of chitin in the larval cuticle, eggs, and peritrophic matrix. Further examination using an electron microscope reported that the larval cuticle presented major cellular damage and loss of the lamellate layer of the procuticle [18][19].

More
©Text is available under the terms and conditions of the Creative Commons-Attribution ShareAlike (CC BY-SA) license; additional terms may apply. By using this site, you agree to the Terms and Conditions and Privacy Policy.
Upload a video for this entry
Information
Subjects: Environmental Sciences
Contributor MDPI registered users' name will be linked to their SciProfiles pages. To register with us, please refer to https://encyclopedia.pub/register :
Azizur Rahman
View Times: 181
Entry Collection: Environmental Sciences
Revision: 1 times (View History)
Update Time: 24 Dec 2021
Table of Contents
1000/1000
Hot Most Recent