Submitted Successfully!
Thank you for your contribution! You can also upload a video entry related to this topic through the link below:
https://encyclopedia.pub/user/video_add?id=17226
Check Note
2000/2000
Neuroendocrine Tumors
Edit
Upload a video
This entry is adapted from 10.3390/biology10100950

Neuroendocrine neoplasms (NENs) first described as “karzinoide” by Dr. Oberndorfer in 1907, comprise a family of heterogeneous tumors which can range from well differentiated neuroendocrine tumors (NETs) to poorly differentiated neuroendocrine carcinomas (NECs). NENs emerge from the diffuse endocrine systemand therefore can be found throughout the body, but they most commonly occur in the gastrointestinal tract with a peak incidence around the 5th and 6th decade of life. Based on the latest Survival Epidemiology and End Results data, incidence of NENs is on the rise with almost 7 cases per 100,000 persons in the United States. NENs can be alternatively classified as functional or non-functional based on the release of specific hormones by the tumor cells (e.g., serotonin, vasoactive intestinal peptide, insulin, gastrin, somatostatin, glucagon) and the subsequent development of various secretory syndromes.

Small intestine NETs (SI-NETs) (i.e., jejunal and ileal) comprise 42% of the tumors of the small intestine, while their incidence in the United States is 1.05 per 100,000 persons [1]. SI-NETs can be functional or nonfunctional, while their diagnosis is challenging and often occurs at an advanced disease stage as SI-NETs often remain asymptomatic or present with chronic abdominal pain. In rare cases initial presentation can be a complication which can include obstruction, perforation, or bleeding [2]. When SI-NETs are suspected, the combination of imaging and biomarkers can point towards diagnosis [3]. Multi-phase CT scan of the abdomen can serve as an initial diagnostic modality, while MRI can detect liver metastases with higher accuracy compared to CT. However, given that the majority of these tumors have somatostatin receptors, functional imaging modalities such as PET/CT with gallium-68–labeled somatostatin analogs have dramatically improved the diagnostic sensitivity [4]. In addition, biomarkers such as Chromogranin A (CgA) and 24-h urinary 5-Hydrocyondoleacetic acid (5-HIAA) have been widely used as SI-NETs diagnostic aids, however with several limitations and suboptimal diagnostic accuracy [5]. Despite the undeniable importance of imaging and biomarkers, SI-NET diagnosis can only be established with tissue biopsy and further tumor grading based on the combination of Ki-67 proliferative index with cell mitotic rate [5].
Carcinoid syndrome can develop in up to 40% of patients with NETs and is a result of vasoactive substances overproduction, mainly serotonin, by tumor cells [6]. Clinical manifestations range from the classic triad of cutaneous flushing, diarrhea and bronchospasm to neuropsychiatric symptoms, pellagra and local or distant fibrosis [7]. The liver normally exerts a first pass metabolism on tumor-secreted vasoactive substances and prevents them from entering systemic circulation. Thus, carcinoid syndrome is not developed until tumor burden is profound or, most commonly, liver metastases occur. Carcinoid heart disease (CHD) is a fibrotic complication of carcinoid syndrome and can affect up to 40% of these patients [8]. CHD is a detrimental complication of elevated circulating levels of vasoactive substances such as serotonin and its metabolites, which produces fibrosis and endocardial plaque formation mainly on right sided cardiac valves and endocardium, subsequently leading to right sided heart failure [9]. Interestingly, in most cases, left sided heart failure is avoided because 5HIAA is inactivated in the lungs [7]. However, in patients with patent foramen ovale (PFO) with right-to-left shunt, bronchial NETs or very high serotonin levels, left-sided CHD can develop as well [8]. Unfortunately, the presence of CHD is associated with substantial morbidity and mortality.

2. Biomarkers in the Diagnosis and Management of Small Intestine NETs (SI-NETs)

Biomarkers used in the setting of SI-NETS are extrapolated from the general field of GEP-NETs and other NETs and are divided in two main categories: mono-analyte and multi-analyte biomarkers [10] ( Figure 1 ). The former are specific molecules (protein, gene, RNA) whose levels in the blood or other bodily fluids can be used to predict the presence of disease as well as assess its degree of severity. This is true for traditional biomarkers like chromogranin A and 5-HIAA, as well as biomarkers used in other malignancies (e.g., CEA for adenocarcinoma). The main disadvantages of the single-analyte method include the high heterogeneity of NETs, the lack of secretory products in high proportion of NETs as well as the lack of standardization in measurement of biomarker concentrations, which subsequently lead to a range of sensitivities and specificities across different assays used [11]. To address the inherent limitations of mono-analyte assays, there has been a gradual shift towards the development of tests that are able to identify multiple genomic regulators (mRNA, miRNA, ctDNA) associated with a specific disease process, with NETest being the most heavily investigated multi-analyte assay in the field of NETs [12]. A brief overview of SI-NET biomarkers is presented on Table 1 . 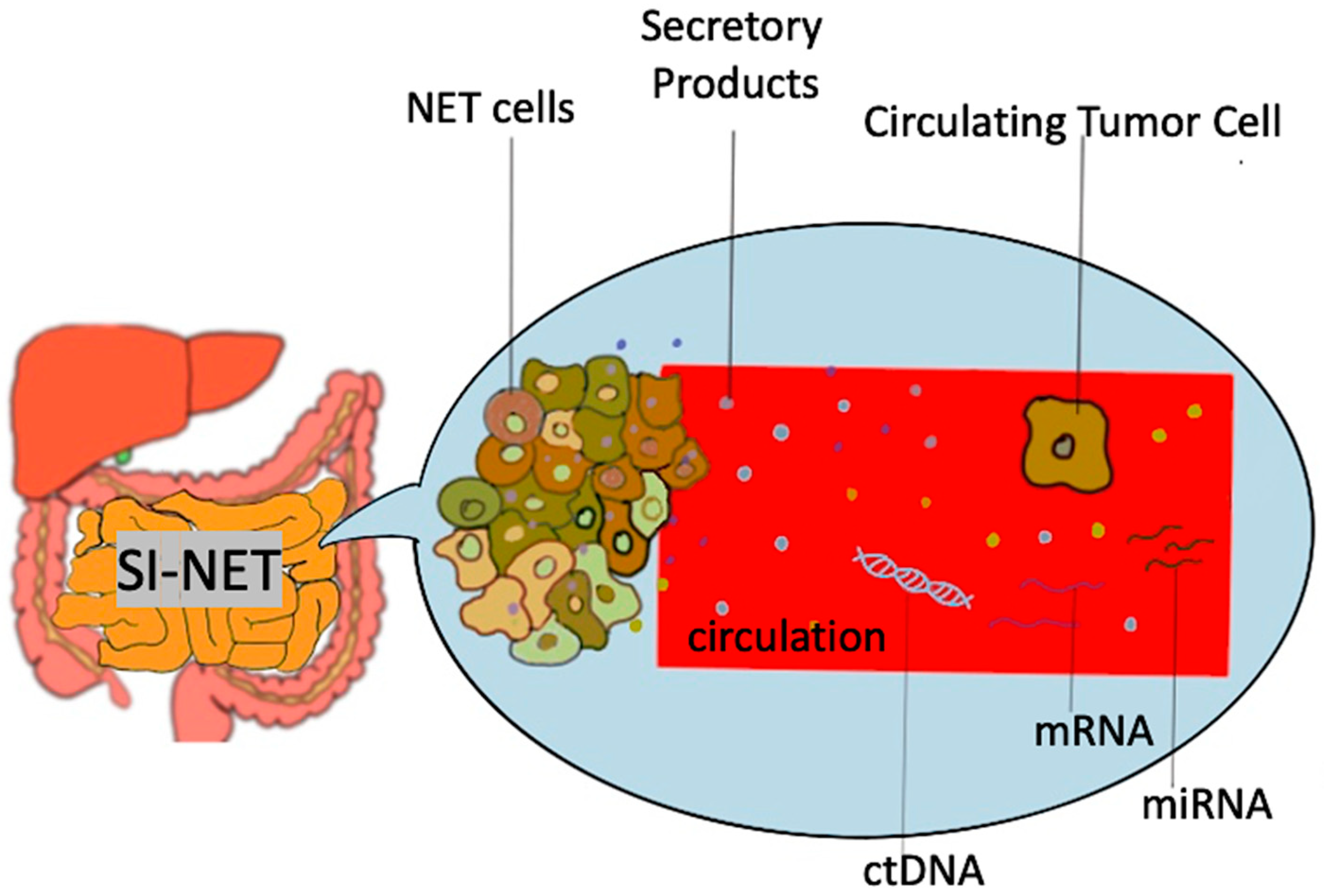 We delineated the wide spectrum of biomarkers used in the field of GEP-NETs with emphasis placed on SI-NETs and CHD. We highlighted that there is a growing armamentarium of molecules with potential diagnostic and prognostic utility, especially in the area of multi-analyte assays like NETest, which aim to surpass the inherent pitfalls of mono-analyte biomarkers like CgA and 5-HIAA by offering consistent and reproducible results, in addition to superior sensitivity and specificity. However, their efficacy remains to be validated by additional studies, with the use of traditional biomarkers still predominating. Based on the available data and until NETest are further validated and become widely available, traditional mono-analytes can be used as adjunct to diagnosis and prognosis. More specifically for SI-NETs CgA should be used and interpreted with caution, given that diagnostic accuracy is limited, while 5HIAA should be followed especially for surveillance of carcinoid syndrome. In addition, the use of biomarkers in the field of CHD is more or less extrapolated from experience with GEP-NETs and carcinoid syndrome in general. For CHD, 5-HIAA and NT-proBNP remain the main biomarkers and should be utilized mainly as screening tools for the development and assessment of progression of CHD in patients with carcinoid syndrome. Given that the role of multi-analyte assays is less clear, future studies should assess the role of novel biomarkers in CHD. The above findings indicate that the search for a “one-size-fits-all” gold standard biomarker in the field of GEP-NETs is still ongoing.

More
© Text is available under the terms and conditions of the Creative Commons Attribution (CC BY) license; additional terms may apply. By using this site, you agree to the Terms and Conditions and Privacy Policy.
Upload a video for this entry
Information
Subjects: Oncology
Contributor MDPI registered users' name will be linked to their SciProfiles pages. To register with us, please refer to https://encyclopedia.pub/register :
Markos Kalligeros
View Times: 56
Revision: 1 time (View History)
Update Time: 16 Dec 2021
Table of Contents
1000/1000
Hot Most Recent