Submitted Successfully!
Thank you for your contribution! You can also upload a video entry related to this topic through the link below:
https://encyclopedia.pub/user/video_add?id=17224
Check Note
2000/2000
Apiaceae as Antioxidants
Edit
Upload a video
This entry is adapted from 10.3390/cosmetics8040111

The excess level of reactive oxygen species (ROS) disturbs the oxidative balance leading to oxidative stress, which, in turn, causes diabetes mellites, cancer, and cardiovascular diseases. Dietary antioxidants can balance these effects of ROS and oxidative stress. In recent years, there has been an increasing trend in the use of herbal products for personal and beauty care. The Apiaceae (previously Umbelliferae) family is a good source of antioxidants, predominantly phenolic compounds, therefore, widely used in the pharmaceutical, cosmetic, cosmeceutical, flavor, and perfumery industries. These natural antioxidants include polyphenolic acids, flavonoids, carotenoids, tocopherols, and ascorbic acids, and exhibit a wide range of biological effects, including anti-inflammatory, anti-aging, anti-atherosclerosis, and anticancer. 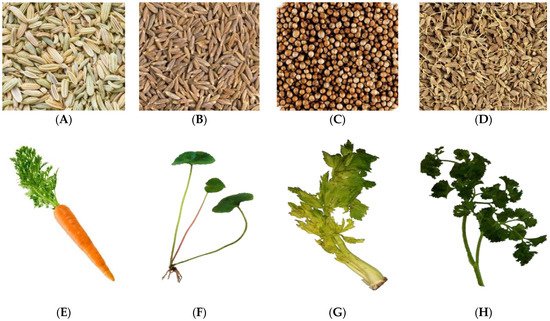 Figure 1. Different parts of selected Apiaceae family: (A) Fennel seeds; (B) Cumin seeds; (C) Coriander seeds; (D) Anise seeds; (E) Carrot; (F) Indian pennywort; (G) Celery plant; (H) Parsley (Photo courtesy of Thevin Randika).
The comparison of global production statistics of Apiaceae crops is difficult as the data tracked by the Food and Agriculture Organization of the United Nations (FAO) is recorded under the crops belonging to other families. The only Apiaceae family crops recorded by FAO are grouped as “carrots and turnips” and “Anise, badian, fennel, coriander”. Production of anise, badian, fennel, and coriander was recorded to be 1.97 million MT in 2019 with the highest quantity from Asia (87.6%) especially from India (1.4 MT). Other top five producers are Mexico, Syria, Iran, China, and Turkey. However, the production of carrots and turnips in 2019 was estimated to be 44.76 MT which is nearly 23-fold higher than that of carrots and turnips. The major production is again arising from Asia (64.8%) especially in China while the other top five countries are Uzbekistan, the United States of America, Russia, Ukraine, and the United Kingdom [9].
Apiaceae family consists of economically important aromatic plants and are commonly used as food, flavors (spices, condiments), ornamental plants, for medical purposes and used in the food, perfume, pharmaceutical, cosmetic and cosmeceutical industries [5][10][11][12]. Some of the Apiaceae are spices, which have been used as a flavoring, seasoning, and coloring agent, and sometimes as preservatives throughout the world since ancient times, especially in India, China, and many other southeastern Asian countries [13]. Many species from Apiaceae have been used as a common household medicinal remedy for various health complications traditionally [14][15]. Many recent studies have also reported that several species in this Apiaceae family are good sources of bioactive phytochemicals with potent antioxidant, antibacterial, antibiotic or antimicrobial, and anti-inflammatory properties, antidiabetic, anticarcinogenic, cardioprotective, antihyperglycemic, hypolipidemic effects, and among others [7][15][16][17].
Due to health risks and toxicity, synthetic phenolic antioxidants are replaced with natural antioxidants [18][19][20]. The natural antioxidants from plant or spices and herbs extracts are vitamins, tocopherols, ascorbic acids, carotenoids, phenolic acid, flavonoids, tannins, stilbenes, lignans, terpenes, anthocyanins, alkaloids, components of essential oils, phospholipids, among others [13][19][21][22]. Apiaceae plants are rich source of these natural antioxidants of which phenolic compounds especially phenolic acids and flavonoids are found predominantly [7]. They are responsible for organoleptic characteristics such as bitterness, astringency, color, flavor, and odor [23].
Overproduction of the reactive oxygen species (ROS) results in oxidative stress that leads to several pathologies, such as hypertriglyceridemia, cancer, neurodegenerative diseases, diabetes, skin diseases, aging, wound healing, and cardiovascular diseases, because of its role in reducing inflammation, DNA damage changes to proteins and peroxidation of lipids [24][25][26][27][28]. These effects of reactive oxygen species (ROS) and oxidative stress can be balanced by antioxidant enzymes and natural dietary antioxidants [29]. Apiaceae rich in antioxidants, predominantly phenolic acids and flavonoids have many therapeutic benefits [7][30][31]. Table 1 shows the reported therapeutic effects of antioxidants from Apiaceae species.
Table 1. Therapeutic effects of antioxidants from Apiaceae species.
Furthermore, antioxidants such as vitamin A, vitamin C, vitamin E, thiols, flavonoids, and other polyphenolics have known applications in dermatology and cosmetology [49][52]. The application of these phenolic compounds in cosmetics has also proved for their anti-aging, photoprotective, antimicrobial, wound healing, and anti-inflammatory action [49][53].
Free radical scavenging and collagenase and elastase inhibitory activities of polyphenols can delay the aging process. The high antioxidant capacity of phytonutrients, especially flavonoids, and triterpenoids, involve in the stimulation of keratinocyte and fibroblast proliferation and play an important role in wound healing. Further polyphenols act as free-radical scavengers and can protect against ultraviolet (UV) damage [49][54][55][56]. Other than the active ingredients, antioxidants are added as protectors of other active ingredients of the cosmetics against oxidation [53][57].
Recently, natural antioxidants derived from plant sources such as spices, herbs, and the essential oil extracted from them have gained mounting interest in the application of cosmetic and pharmaceutical products [49][58]. Many studies revealed that plants from the Apiaceae family can be a good source of natural antioxidants and have the potential for pharmaceutical and cosmetic applications [1][59][60].

2. Chemical Composition of Apiaceae Family and Their Antioxidant Activity

Antioxidants can be defined as substances that, when present at low concentrations, delay or prevent oxidation of a substrate mainly through their free radical scavenging activity [61]. The natural antioxidant capacity of plant or spices and herbs or their extract is mainly associated with the wide range of biologically active compounds that includes phenolic acid, flavonoids, alkaloids, carotenoids, vitamins, tocopherols, ascorbic acids, tannins, lignans, terpenes, components of essential oils, anthocyanins, phospholipids, among others [13][19][21][49]. Table 2 and Table 3 summarize the primary antioxidant and other biologically active compounds present in the Apiaceae family.
Table 2. Chemical composition of some Apiaceae species.
Table 3. Flavonoid content of some Apiaceae species.

So far, there is no single appropriate method to determine the total antioxidant capacity of a particular sample because lack of a validated assay that can reliably measure the antioxidant capacity of foods and biological samples [21][73]. Thus, various tests have been used and based on the chemical reactions involved, the methods are broadly categorized into two categories: single electron transfer (ET), and hydrogen atom transfer (HAT) assays. ET-based assays include 2,2-diphenyl-1-picrylhydrazyl (DPPH) and 2,2′-azinobis-3-ethylbenzothiazoline-6-sulfonate (ABTS) also known as Trolox equivalent antioxidant capacity (TEAC), and ferric reducing antioxidant power (FRAP), while HAT-based assays include oxygen radical absorbance capacity (ORAC) and total peroxyl radical-trapping antioxidant parameter (TRAP) [74][75].
These test assays can also be categorized as organic substrate-based assays such as DPPH and ABTS/TEAC, mineral substrate-based tests such as FRAP, and biological substrate-based ones such as and 2,2,-azobis(2-amidinopropane) dihydrochloride- (AAPH-) induced hemolysis assays [18].
Free-radical trapping capacity can be estimated using DPPH and TEAC/ABTS assays. The FRAP assay is a test that measures the antioxidant power based on the reduction of Ferric (Fe3+) to Ferrous ions (Fe2+) [18][76]. DPPH and TEAC/ABTS assays are broadly applied in assaying food samples [49][73]. Table 4 shows the antioxidant capacity of various plant materials from the Apiaceae family.
Table 4. Antioxidant capacity of Apiaceae species.
Furthermore, methanolic and ethyl acetate extracts of aerial parts of carrot (Daucus carota) showed best antioxidant activity with IC50 of 86.89 μg/mL and 166.79 μg/mL, respectively [81]. Essential oil from wild carrot (Daucus carota L. ssp. Carota) contains phenylpropanoids, monoterpenes, sesquiterpenes, phenols, and flavonoids and showed an in vitro antioxidant activity with the good results of DPPH (2.1 mg/mL) and ABTS (164 mmol FeSO4/g) assay [82]. The values for antioxidant capacity highly varied between the studies. Due to lack of a standard assay, it is difficult to compare the results reported by different research groups and the food and nutraceutical industry cannot perform strict quality control for antioxidant products [73].

More
© Text is available under the terms and conditions of the Creative Commons Attribution (CC BY) license; additional terms may apply. By using this site, you agree to the Terms and Conditions and Privacy Policy.
Upload a video for this entry
Information
Subjects: Others
Contributor MDPI registered users' name will be linked to their SciProfiles pages. To register with us, please refer to https://encyclopedia.pub/register :
Punniamoorthy Thiviya
View Times: 124
Revisions: 3 times (View History)
Update Time: 17 Dec 2021
Table of Contents
1000/1000
Hot Most Recent