Submitted Successfully!
Thank you for your contribution! You can also upload a video entry related to this topic through the link below:
https://encyclopedia.pub/user/video_add?id=17222
Check Note
2000/2000
Expanding Poly(lactic acid) (PLA) and Polyhydroxyalkanoates (PHAs) Applications
Edit
Upload a video
This entry is adapted from 10.3390/polym13234271

Some of the vital limitations to the broader use of these biopolymers are that they are less flexible and have less impact resistance when compared to petroleum-based plastics (e.g., polypropylene (PP), high-density polyethylene (HDPE) and polystyrene (PS)). Recent advances have shown that with appropriate modification methods—plasticizers and fillers, polymer blends and nanocomposites, such limitations of both polymers can be overcome. This work is meant to widen the applicability of both polymers by reviewing the available materials on these methods and their impacts with a focus on the mechanical properties.

One of the ideal materials for various packaging applications is PLA foam. PLA foams are becoming increasingly desired as renewable biopolymer alternatives to petroleum-based polymer foams. This is due to their light weight and good cushioning properties. Polymers foams are produced using different blowing agents, which can be categorized as chemical and physical. The production of foam cells under the impact of pressure/temperature release is done via chemical blowing agents. On the other hand, physical foaming of polymers and composites, results in the production of cellular structures with cell sizes smaller than 10 µm and cell densities greater than 109 cells/cm3, known as microcellular foams [1][2]. PLA foams can be produced via batch processing, foam injection molding, bead foaming as well as foam extrusion. Foam PLA/natural (lignocellulosic) fiber-reinforced composites are produced mainly using foam injection molding and extrusion. Figure 1, Figure 2 and Figure 3, show the concept of foam injection molding, foam extrusion and bead foaming, respectively. Such foams exhibit thermal and mechanical properties comparable to those of the currently used petroleum-based foams [3][4]. An improvement of the morphology of the foam cell via modification of polymer melt viscosity is believed to be feasible through the addition of lignocellulosic fibers. For example, the incorporation of lignocellulosic fibers can lower the cell size and increase foam cell density [2][5][6][7][8][9][10]. Moreover, PLA/natural (lignocellulosic) fiber-reinforced composites were found to enhance specific tensile and flexural moduli. Furthermore, changes in PLA crystallinity prompted by the incorporation of fibers can potentially alter the foam cell characteristics of PLA composites [11]. 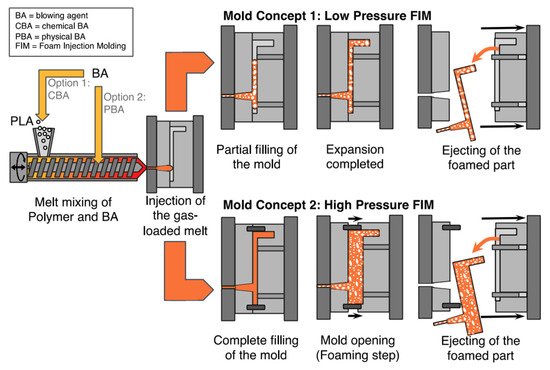 Figure 2. The concept of foam extrusion [3]. 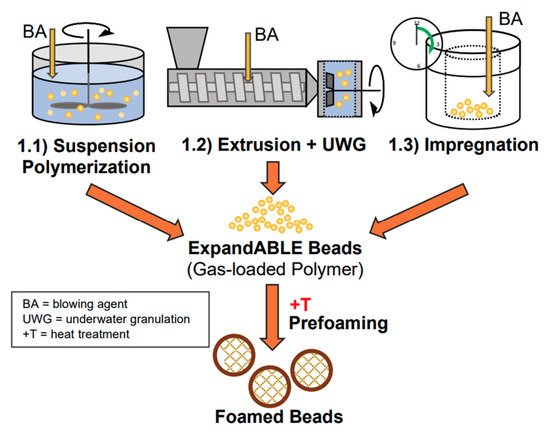 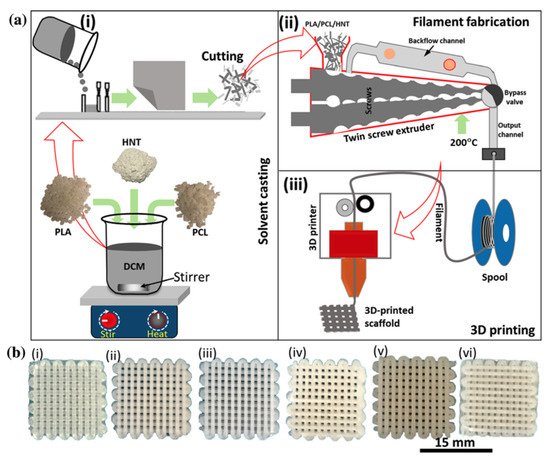 Figure 4. (a) Schematic of filament fabrication and 3D printing of scaffolds and (b) optical images of various scaffolds ((i) for neat PLA, (ii) PLA/PCL (50/50 wt.%), (iii) PLA/PCL/HNTs (50/50/1 wt.%), (iv) PLA/PCL/HNTs (50/50/3 wt.%), (v) PLA/PCL/HNTs (50/50/5 wt.%) and (vi) PLA/PCL/HNTs (50/50/7 wt.%)) [19].
Various applications (e.g., construction, automobile and electronics) requires high criteria for dripping combustions and flammability, which cannot be satisfied by neat PLA. Therefore, there have been some attempts to enhance PLA’s flame retardancy for compact and foamed forms of PLA. In one study [20], an enhancement in compact PLA’s flame retardancy was achieved by a synergistic mixture of ammonium polyphosphate (APP) with expandable graphite (EG), an eco-friendly flame retardant. With 15% of this intumescent flame retardant (APP/EG = 3:1), there was an increase in the Limiting Oxygen Index (LOI) from 22 to 36.5. The UL-94-V-0 classification was also reached [20]. In another study [21], the same burning behavior was reported using 30% of a mixture (3:2) of a novel hyperbranched polyamine charring agent (HPCA) together with APP. Tang et al. [22] reported good flame retardancy, anti-dripping effects and high LOI values with synergistic combinations of expanded graphite and aluminum hypophosphite [22]. Other studies were done to enhance foamed PLA’s flame retardancy with a phosphorous containing flame retardant, as well as graphene [23] or starch [24] as a charring agent. UL-94-V-0 classification was reported. Moreover, LOI was significantly increased and anti-dripping effects were observed.
Vadas and coworkers were able to incorporate a bio-based flame retardant into a PLA extrusion foam [25]. A combination of APP as an intumescent flame retardant and flame retardant treated cellulose (surface treatment with boric acid and diammonium phosphate) as a bio-based charring agent was used to lower PLA foams’ flammability. A multifunctional epoxy-based chain extender was utilized and, even at elevated additive loadings, a substantial expansion with void fractions higher than 90% was attainable with carbon dioxide as a blowing agent. With an additive content lower than 20%, superb flame retardancy (LOI of 31.5% and UL-94 V-0) was reported. Moreover, compared to the compact materials, the flame retardant synergism was less noticeable in the expanded foams. This is attributed to the enlarged contact surface as well as the flame retardant’s lower volume concentration [23][24].
In another investigation [26], a novel flame retardant and toughened bio-based (PLA)/glycidyl methacrylate-grafted natural rubber (GNR) composite was reported. The interfacial compatibility between PLA/GNR matrix and the charring ability of the PLA/GNR/SiAHP composites as well as the modified aluminum hypophosphite by silane (SiAHP) was enhanced to a certain extent due to the surface modification of AHP. The flame retardancy and toughness of the PLA/GNR/SiAHP composites were slightly greater than those of PLA/GNR/AHP composites. UL-94 V-0 rating and LOI of 26.50% were reported. The promising flame retardancy of the PLA/GNR/SiAHP composites was suggested to be due to the synergistic effect including condensed and gaseous phase flame-retardant mechanisms. High-performance flame-retardant PLA/GNR/SiAHP composites have great potential applications as alternatives to petroleum-based polymers in the building and automotive interior sectors [26].
Li et al. [27] developed a cooperative flame-retardant system based on natural intumescent-grafted bamboo charcoal (BC) and chitosan (CS) for PLA. Figure 5 shows a schematic diagram of the composite preparation and testing. The composite demonstrated minimal decline in strength properties and enhanced flame retardancy. CS as an adhesion promoter enhanced the interfacial compatibility between PLA and graft modified bamboo charcoal resulting in improving the tensile properties by 8.42% and 11.11%, respectively for the Young’s modulus and tensile strength. The study found that CS endorses the reorganization of the internal crystal structure. At 3 wt.% CS and 30 wt.% graft-modified bamboo charcoal, the composite’s crystallinity was reported to be 43 times that of neat PLA. Flammability tests (UL-94 V-0 rating and LOI of 33.6 vol.%) showed a substantial enhancement in flame retardancy. The reported composite is claimed to meet the requirements for strong, biodegradable and non-toxic PLA packaging products [27].

Technologies that are developed to enhance shelf life, sensory properties and keeps the packaged food safe from mechanical damage as well as microbial contamination are referred to as active food packaging. Bioactive agents (Figure 6) have been used to create edible films with induced desirable functionalities. Figure 7 shows a schematic of active food packaging based on bio nanocomposites with outstanding preservation capability against pathogens and UV irradiation [28]. In one study [29], poly(3-hydroxyalkanoate-co-3-hydroxyalkanoate) (PHAE) (an mcl-PHA) was coated with zosteric acid (nontoxic, antifouling agent) to come up with a PHA-based active food packaging. Exposing the coated PHAE to sewage sludge showed no signs of microbial growth [29]. In another work [30], Azotobacter chroococcum 23 was used to synthesize PHB in order to develop a PHA-based active food packaging. Antimicrobial agents, namely chemically synthesized benzoic acid and natural Silbiol were added to the PHB films and PHB-coated paper surface. The PHB films and PHB-coated paper surface exhibited no major antimicrobial activity against Gram-negative and Gram-positive bacterial strains [30]. For the purpose of preventing the antimicrobial agents such as benzoic acid from migrating into the food from the food packaging, Kwiecien et al. [31] produced an active food packaging system based on preservative-oligo (3-HB). Different concentrations of the antimicrobial agent vanillin (4-hydroxy-3-methoxybenzaldehyde) was added to the PHB solution [32]. The antimicrobial potential of the developed films was tested against a variety of bacterial strains and fungi. Both thermal and mechanical properties of the produced PHB films with and without vanillin were investigated and analyzed. The study concluded that in order to demonstrate antimicrobial activity, the minimum concentration of vanillin required is ≥50 μg/g PHB for fungi and ≥80 μg/g PHB for bacteria. Furthermore, the elongation at break for the PHB-vanillin exhibited a small increase when compared to that of PHB film. Nonetheless, both of the modulus of elasticity and tensile strength decreased. The rate of migration of vanillin at 37 °C into 50% ethanol and distilled water were 71.736 mg/mL and 65.54 mg/mL, respectively. This might be attributed to the higher temperature and faster migration of vanillin into 50% ethanol than distilled water [32]. 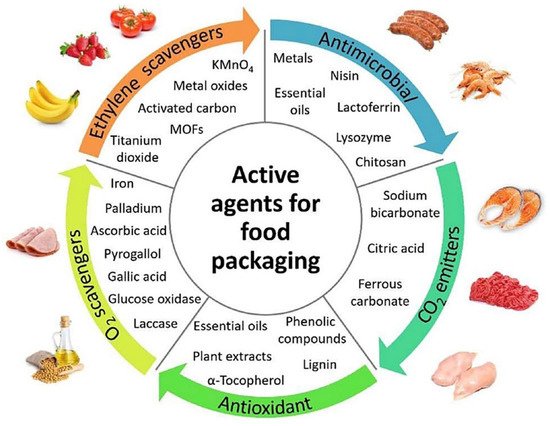 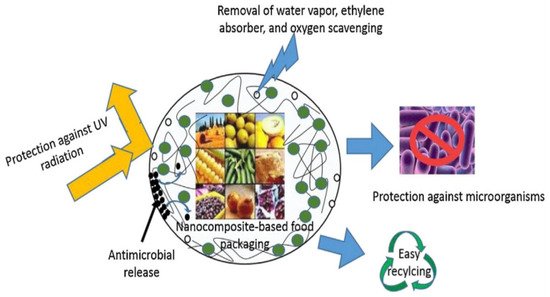 Figure 7. Active food packaging based on bio nanocomposites. Reprinted with permission from Elsevier, 2020 [28].

More
© Text is available under the terms and conditions of the Creative Commons Attribution (CC BY) license; additional terms may apply. By using this site, you agree to the Terms and Conditions and Privacy Policy.
Upload a video for this entry
Information
Subjects: Engineering, Manufacturing
Contributor MDPI registered users' name will be linked to their SciProfiles pages. To register with us, please refer to https://encyclopedia.pub/register :
Ahmed Naser
View Times: 236
Revisions: 3 times (View History)
Update Time: 17 Dec 2021
Table of Contents
1000/1000
Hot Most Recent