Submitted Successfully!
Thank you for your contribution! You can also upload a video entry related to this topic through the link below:
https://encyclopedia.pub/user/video_add?id=17219
Check Note
2000/2000
Optic Flow and Goal-Directed Displacements in Insects
Edit
Upload a video
This entry is adapted from 10.3390/insects12121075

Optic flow was first introduced by Gibson as part of their ecological approach to perception and action. While this theoretical approach (as a whole) has been demonstrated to be particularly suitable for the study of goal-directed displacements in humans, its usefulness in carrying out entomological field studies remains to be established.

Over the last eighty years, it has often been shown that flying insects rely on optic flow to perform various locomotion tasks [1][2][3][4][5]. Optic flow can be defined as a vector field of the apparent motion of objects, surfaces, and edges in a visual scene caused by the relative motion between an agent and the scene while being independent of the scene’s texture (see Figure 1 and [6][7][8]). Insects seem to be masters of spacial navigation due to their ability to extract perceptual information from optic flow in order to finely control their everyday locomotion tasks: terrain-following, centering, wall-following, speed adjustment, and landing (see review articles [3][4][5][9]). 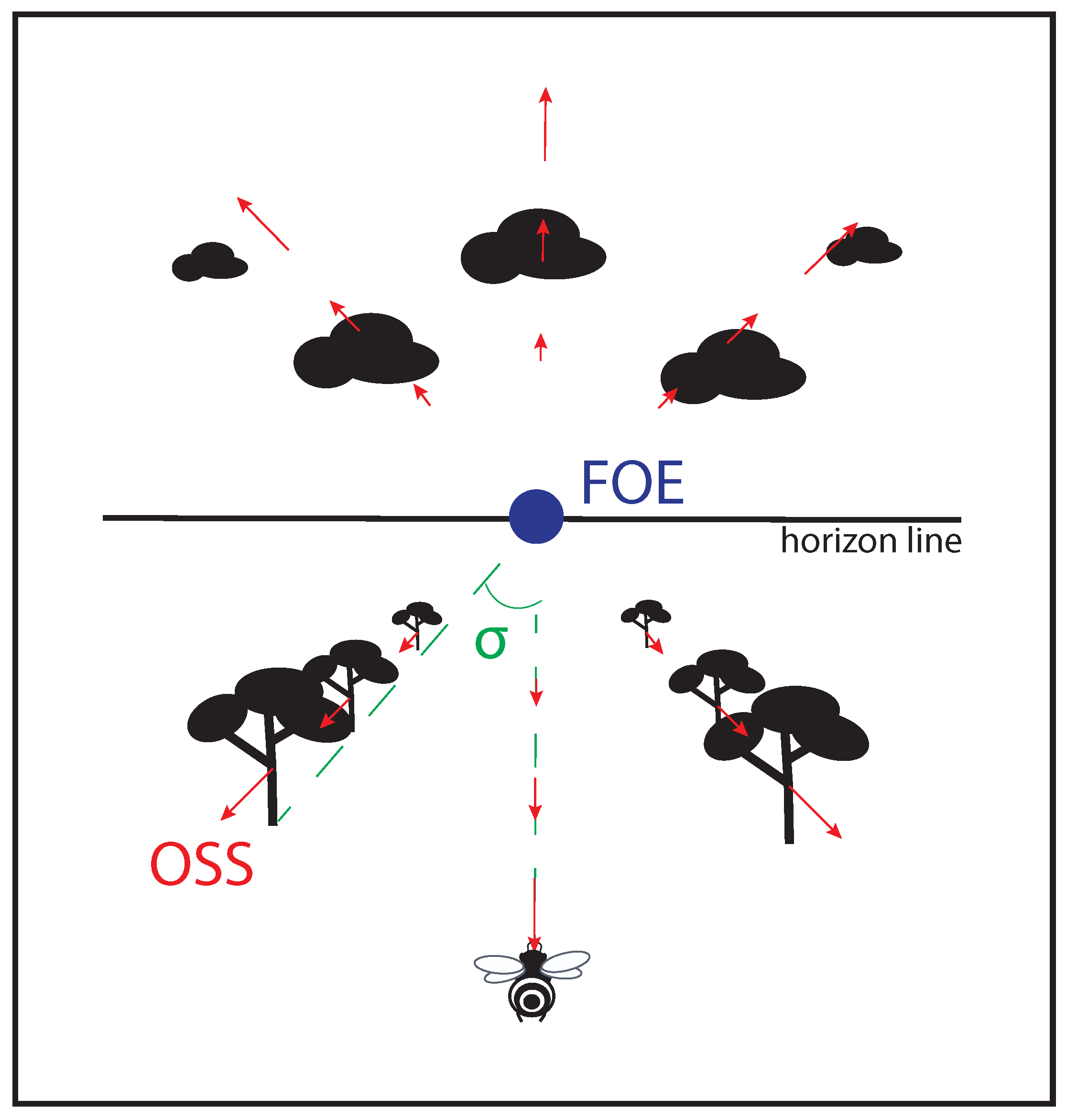 Figure 1. Non exhaustive optic flow variables perceived by a flying agent. Objects sliding on the optical sensor of an agent bear an optical velocity (OV) depending on the distance agent-object, and on the agent’s speed; focus of expansion (FOE) at the center of the visual field is the only point providing no OV; splay angle (σ
) is the angle formed by the direction vector of the agent and one of the lines parallel to the movement joining the horizon.
As stated previously, most of the studies cited in this first section highlight the central role played by optic flow in the control of navigation tasks in insects. A close inspection of these studies demonstrates significant disparities between the terms used when referring to the same concepts or entities (see Table 1). It also reveals, in some cases, confusions between the perceptual support used by insects in the control process and the property of the environment to which it gives access. We would like to argue that these disparities and confusions reveal a need for some theoretical clarifications. To be fully useful by the entomologist community, the optic flow concept must be used in the same way as in its original theoretical framework, i.e., the ecological approach of perception action proposed by Gibson in the last century [6]. Gibson’s framework has already proved to be relevant in addressing issues related to the control of human displacement [30][31] and by offering the robotics community a framework for carrying out new generations of studies [32][33]. We would like to argue in this contribution that the ecological approach to perception and action, taken as a whole, provides powerful theoretical and methodological tools allowing the entomologist community to: (i) take a critical look at the research carried out to date, (ii) develop more rigorous and innovative experimental protocols, and (iii) define new scientific issues pushing the boundaries of the current research field.
Table 1. Variability of denominations used in the entomologist community to describe perceptual information.

2. How the Ecological Approach Allows a Better Understanding of the Processes Underlying Trajectory Control in Insects

One of the cornerstones of the ecological approach proposed by Gibson lies in the fact that it applies indifferently, whether we are interested in the behavior of humans, insects, or robots. It is this idea that appears in the background when Gibson refers to the concept of agents and considers that the perceptual information used to control a given displacement is available in the perceptual flows in which agents are immersed, not in the head of an agent after a cognitive post treatment. If we push this reasoning to the extreme, despite having different sensory modalities, humans or insects could detect the same high order variable(s) in the perceptual flows when they perform similar tasks.

2.2. New Reading of the Data from the Literature

While the literature contains numerous results which demonstrate the major role played by optic flow in the control of displacement in insects, the conceptual framework provided by Gibson (see Section 2) allows a more detailed analysis of the perceptual-motor processes implemented. As an example, when reviewing the different tasks mentioned in Section 1, several clarifications can be made.

Herein is to promote the conceptual framework provided by Gibson [38] to address issues related to the perceptual control of goal-directed displacements in insects. Herein has shown how the use of this framework could allow the entomologist community to have a more precise idea of the different perceptual degrees of freedom available, potentially useful for insects, in perceptual visual flows. The difference in the status of these perceptual degrees of freedom (low order vs. high order variables) would be worth considering in future studies. The ecological approach of perception and action also provides a very convenient methodological framework with a clear experimental agenda which would help to guide the researcher’s approach. Last but not the least, this approach would allow a renewal of questions and guide future research towards new scientific challenges.

More
© Text is available under the terms and conditions of the Creative Commons Attribution (CC BY) license; additional terms may apply. By using this site, you agree to the Terms and Conditions and Privacy Policy.
Upload a video for this entry
Information
Subjects: Entomology
Contributor MDPI registered users' name will be linked to their SciProfiles pages. To register with us, please refer to https://encyclopedia.pub/register :
Julien R Serres
View Times: 95
Revisions: 2 times (View History)
Update Time: 17 Dec 2021
Table of Contents
1000/1000
Hot Most Recent