Submitted Successfully!
Thank you for your contribution! You can also upload a video entry related to this topic through the link below:
https://encyclopedia.pub/user/video_add?id=17212
Check Note
2000/2000
Pregnancy Complications Foreshadow Future Disease
Edit
Upload a video
This entry is adapted from 10.3390/medicina57121320

During gestation, the maternal body should increase its activity to fulfil the demands of the developing fetus as pregnancy progresses. Each maternal organ adapts in a unique manner and pace. In an organ or system that was already vulnerable before pregnancy, the burden of pregnancy can trigger overt clinical manifestations. After delivery, symptoms usually reside; however, in time, because of the age-related metabolic and pro-atherogenic changes, they reappear. Therefore, it is believed that pregnancy acts as a medical stress test for mothers. Pregnancy complications such as gestational hypertension, preeclampsia and gestational diabetes mellitus foreshadow cardiovascular disease and/or diabetes later in life. Affected women are encouraged to modify their lifestyle after birth by adjusting their diet and exercise habits. Blood pressure and plasmatic glucose level checking are recommended so that early therapeutic intervention can reduce long-term morbidity.

Preeclampsia (PE) is a pregnancy-related complication affecting multiple maternal organs characterized by new-onset hypertension after 20 weeks. In previously healthy pregnancies that are complicated by PE, pre-existing, subclinical cardiovascular risk factors are usually identified: maternal obesity [1], smoking, elevated lipid levels [2], hypertension [3], insulin resistance [4] and thrombophilia [5]. In patients who develop PE before 32 weeks, trophoblastic invasion is suboptimal, suggesting decreased uteroplacental blood flow [6]. High resistance in the uteroplacental flow is evident long before the clinical onset of high blood pressure. The poorly perfused placenta appears to be the source of anti-angiogenic factors that affect maternal vascular endothelium and fenestration of glomerular capillaries, causing proteinuria [7]. Women with high blood pressures in early pregnancy appear to be more sensitive to the circulating anti-angiogenic factor soluble fms-like tyrosine kinase-1 (sFlt-1) and, therefore, are at higher risk of developing PE [8]. First trimester screening for PE with accurate prophylactic measurements [9] and efficient treatment when hypertensive disorders are detected [10] can improve pregnancy outcomes and reduce the risk of long-term cardiovascular consequences. A vulnerability to future cardiovascular disease after PE has been described for many years [11]. Systematic reviews have put together numerous studies on the long-term consequences of PE and quantified the risk of future cardiovascular disease (CVD) after pregnancy with and without PE [12]. After one pregnancy is affected by PE, there is a 6 times increased chance of having a recurrent ischemic attack within a year after developing acute coronary syndrome [12]. Melchiorre et al. describe a so-called “dose-dependent” effect of hypertensive disorders of pregnancy (HDPs) and the long-term risk of developing chronic hypertension depending on the severity of PE, the onset of complications during gestation, the necessity of iatrogenic preterm birth, the association with intrauterine fetal growth restriction (FGR) and the number of gestations affected by HDPs [13]. After at least two pregnancies with PE, there is a 3 times increased risk of developing hypertension [14] as well as a shorter lifespan [15]; an increased chance of stroke (hazard ratio 5.10) [16]; an increased chance of ischemic heart disease (hazard ratio 3.3) [16]; and increased rates of heart failure, cerebrovascular accident and hospitalization because of cardiovascular disease [17].
In patients with HDPs, heart failure is more likely to develop within 5 years postpartum [18]. The associated risk of later CVD is lower for pregnancy-related hypertension than for PE but is still elevated (RR 1.9–2.5) [19]. Thus, HDPs and PE in particular may be regarded as novel risk factors for women’s future cardiovascular health, with a constant need for long-term follow-up. There are data linking PE and diastolic heart failure, but whether the latter is a consequence of the former, or whether there is a common pathogenic background, is still under debate [20][21]. Research into early changes in diastolic function and follow-up on markers common to both pathologies (N-terminal pro-B natriuretic peptide—NT pro-BNP, high-density lipoprotein cholesterol [21]) might be a worthwhile undertaking. The pathophysiological mechanism behind the increased subsequent risk of CVD is linked to endothelial dysfunction and structural abnormalities, including increased carotid intima–media thickness and accelerated coronary calcification and plaque deposition (Figure 1) [22]. This endothelial damage persists beyond the acute phase. However, whether this damage persists in the long term and is responsible for the increased number of cardiovascular events seen in this group is still up for debate. Preeclamptic pregnancies are characterized by increased CD 34+ cells as a reaction to endothelial dysfunction [23]. Whether the number of endothelial progenitor cells (EPC) can be linked to the severity of preeclampsia remains to be demonstrated. 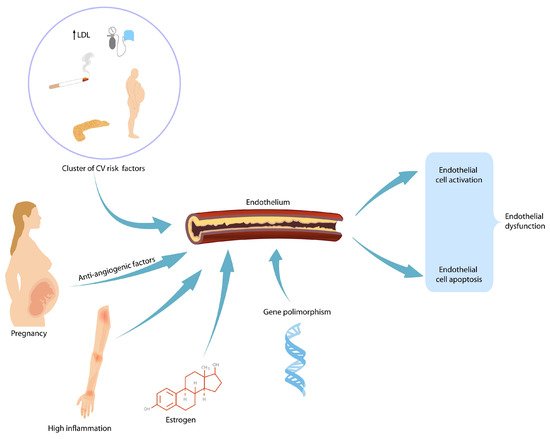 Figure 1. Endothelial dysfunction augmented by female-specific and non-specific risk factors. CV—cardiovascular; LDL—low-density lipoprotein.
The latest meta-analysis included 73 studies (including cohort and case–control studies), analyzed over 13 million pregnancies and showed an important association between HDPs and long-term consequences on maternal cardiovascular system [24]. Important heterogeneity was caused by all or part of the variables, including type of exposure, follow-up time, geographic region and sample source. This is most probably caused by the results from the various reviews performed over the years. We acknowledge the limitations of the meta-analysis in terms of heterogeneity of the included studies and lack of long-term follow-up (Figure 2). 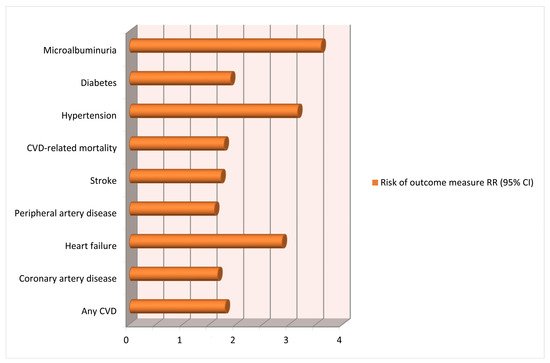 Figure 2. Risk of long-term cardiovascular consequences after a pregnancy complicated by hypertensive disorders in preeclampsia [10][11][24].

Preeclampsia is an endothelial disease characterized by high blood pressure with commonly coinciding proteinuria. Endothelial changes in renal glomeruli observed in pregnancies complicated by PE are reversible when glomerular scarring is not attained [25]. The reversibility of endotheliosis depends on cessation of the cause of endothelial injury. In the case of pregnancies with PE, fibrinous and granular deposits in the glomeruli persist for months after delivery and removal of the placenta [26]. During this time, microalbuminuria can still be detected at any glomerular filtration rate and acts as a cardiovascular disease marker. Preeclampsia alters renal function during gestation and also increases the risk of future chronic hypertension, chronic kidney disease (CKD) and cardiovascular disease [27]. Preexisting kidney vulnerability prior to pregnancy can explain both the appearance of PE and the long-term organ disease.
After one pregnancy complicated with PE, the mother has a fourfold increased risk of developing end-stage renal disease within 10 years after delivery [28]. After more than one preeclamptic pregnancy, a low-birthweight baby or a preterm birth increases the mother’s risk even further [28].
Accurate screening for PE, prevention or delay in the development of kidney disease in preeclamptic pregnancies will improve maternal long-term consequences. Albuminuria should be checked after birth to identify those mothers that need further monitoring of kidney function.

All HDPs are associated with increased risk of arterial hypertension even in the absence of pregnancy risk factors, such as obesity and smoking [29]. When compared to mothers who have late-onset or term preeclampsia, mothers who had gestational hypertension (GH), without proteinuria, have a similar risk of developing CVD and chronic hypertension [30]. Gestational hypertension is associated with a higher risk of kidney disease or diabetes mellitus [29].
In 2020, Garovic et al. showed that the total HDP burden expressed as incidence per-woman is considerably higher than that expressed per-pregnancy. By only looking at hypertension per-pregnancy, there is an underestimation of women who are affected by this condition and may be at risk of future heart or renal disease. Examining the per-woman rate allows a better assessment of women with more than one pregnancy, who may have had hypertension during one of the pregnancies but not the other [31].

Usually, gestational diabetes mellitus (GDM) becomes apparent in the third trimester of pregnancy in patients who have pre-existing insulin resistance or have a reduced capacity to secrete insulin in response to gestational insulin resistance [32]. Universal GDM screening should be considered [33], as women who had GDM in a previous pregnancy are at increased risk of developing type 2 diabetes mellitus (DM) later in life. A meta-analysis of about 675,000 women that had follow-up for 28 years revealed that mothers with GDM have a seven-fold increased risk of developing type 2 diabetes [34]. It is therefore recommended that all mothers who have had GDM have glucose testing 6-12 weeks after delivery and every year thereafter [35]. Lifestyle advice, such as weight control, diet and exercise, should be included in the postnatal follow-up, as obesity in women with GDM triggers a greater risk of developing type 2 DM [36]. Further follow-up with regular assessment of glucose levels, blood pressure and timely intervention with metformin is beneficial in limiting the emergence of morbidity associated with type 2 DM [37].
Carr et al. first demonstrated in 2006 the link between GDM and future maternal cardiovascular disease risk [38]. Years later, studies quantified the risk, and the last meta-analysis in 2019 included almost 5,400,000 women and concluded that pregnant women with GDM have a twofold increased risk of cardiovascular events [39]. The American Heart Association (AHA) includes a prior history of GDM in the classification of cardiovascular risk factors in women [40].
In 2010, the Kidney Early Evaluation Program (KEEP) showed evidence that mothers with GDM have a greater prevalence of proteinuria when compared to women without DM [41]. In 2018, a Danish group conducted a 16-year follow-up for women with GDM and concluded that mothers with GDM were more likely to show a high estimated glomerular filtration rate (eGFR) 9–16 years after birth, which could suggest early stages of glomerular hyperfiltration and renal damage [42].

Physiological pregnancy is characterized by low-grade intravascular coagulation, and during pregnancy and puerperium, the risk of deep venous thrombosis (DVT) is six-times higher [43]. There is limited current knowledge of the long-term risks of venous thrombosis during pregnancy. Cohort studies researching long-term complications have not been conducted in this population, and the present evidence is based on data from a few observational studies [44]. Long-term generic quality of life and subjective well-being 3–16 years after a pregnancy complicated with thrombosis were not different from the general population. Mothers with post-thrombotic syndromes such as chronic venous congestion seemed to have poorer quality of life and an impaired general health [44].
Thrombophilia can be associated with a higher risk of PE [45]. Follow-up of women who have had PE showed that their risk of future thrombosis is twofold higher when compared to mothers who were normotensive during pregnancy [45].

Thyroid disease is the second most common endocrine disorder affecting women of reproductive age. Hyperthyroidism is present in 1 in 200 pregnancies. Symptomatic hypothyroidism is present in up to 1 in 100 pregnancies, and the incidence of subclinical hypothyroidism is much higher [46]. Approximately one in ten young women have anti-thyroid peroxidase (TPO) antibodies, and they are present in one in four euthyroid women who have a member of the family with thyroid disease [47]. Almost half of women with TPO autoantibodies develop postpartum thyroid dysfunction, which may present as hyper- or hypo-thyroidism. Almost half of all women who develop postpartum thyroiditis and who have TPO antibodies will remain hypothyroid for their entire life [48]. After a pregnancy with postpartum thyroiditis, there is a 70% risk of recurrence in a subsequent gestation [49]. Due to the strong association between TPO antibodies and future thyroid disease, clinical screening and checking thyroid function at least once during gestation, during puerperium or one year postpartum are recommended [50].

More
© Text is available under the terms and conditions of the Creative Commons Attribution (CC BY) license; additional terms may apply. By using this site, you agree to the Terms and Conditions and Privacy Policy.
Upload a video for this entry
Information
Subjects: Obstetrics & Gynaecology
Contributor MDPI registered users' name will be linked to their SciProfiles pages. To register with us, please refer to https://encyclopedia.pub/register :
Anca Panaitescu
View Times: 87
Revisions: 2 times (View History)
Update Time: 17 Dec 2021
Table of Contents
1000/1000
Hot Most Recent