Submitted Successfully!
Thank you for your contribution! You can also upload a video entry related to this topic through the link below:
https://encyclopedia.pub/user/video_add?id=17184
Check Note
2000/2000
Nano-Enabled Products for Sustainable Agriculture
Edit
Upload a video
This entry is adapted from 10.3390/plants10122727

Nanotechnology has gained popularity in recent years owing to its established potential for application and implementation in various sectors such as medical drugs, medicine, catalysis, energy, material, and plant science. Nanoparticles (NPs) are smaller in size (1–100 nm) with a larger surface area and have many fruitful applications. The extraordinary functions of NPs are utilized in sustainable agriculture due to nano-enabled products, e.g., nano-insecticides, nano-pesticides, and nano-fertilizers. Nanoparticles have lately been suggested as an alternate method for controlling plant pests such as insects, fungi, and weeds. Several NPs exhibit antimicrobial properties considered in food packaging processes; for example, Ag-NPs are commonly used for such purposes. Apart from their antimicrobial properties, NPs such as Si, Ag, Fe, Cu, Al, Zn, ZnO, TiO2, CeO2, Al2O3, and carbon nanotubes have also been demonstrated to have negative impacts on plant growth and development.

The practice of applying NPs in agriculture promises a bright future, but it is still in its infancy stage [1]. The synthesis of modified NPs for agricultural purposes has considerable potential to alter the perception of conventional agriculture [2][3]. It helps to solve persisting challenges in agriculture using advanced materials and technologies. Most of these problems are usually related to pesticides, herbicides, fertilizers, etc. and their optimal use. In plants, the distribution of NPs involves a characteristic route with multiple advantages [4].
Nanoparticles have a great capacity to protect plants owing to their essential features such as surface-to-volume ratio, size, and optical attributes [5]. A nice example of NPs application is nano-encapsulated fertilizers and pesticides dispensed via a method that distributes the content in a controlled manner [6][7]. This method is also site-specific. For the protection of non-target organisms and other collateral repairs, this highly efficient method is beneficial [8] and provides an effective defense mechanism when plants engage with pathogens by sending systemic compounds such as jasmonic acid, salicylic acid, benzothiadiazole, and others to the appropriate sites [9][10].
In agriculture, some other applications of NT can be seen, such as attenuating natural pesticides and biopesticides, and the measured and controlled release of fertilizers supported by NPs, micronutrients, nano-sensors, and organic fertilizers [11][12][13]. The nanotechnology products database (NPD) website, used to keep updated records on nano-enabled products, showed the total number of products to be 9245 manufactured by 64 countries via 2658 companies (https://product.statnano.com/; accessed on 7 July 2021) in commercial production. Figure 1 illustrates various nano-enabled products and their application in different fields such as agriculture, automotive, construction, cosmetics, printing, petroleum, environment, textile, electronics, sports, fitness, environment, home appliances, renewable energy, food, medicine, and other nano-enabled products. 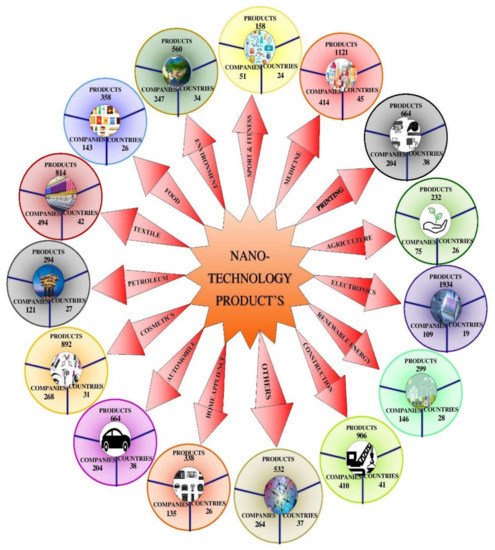 Nowadays, fungicides, pesticides, herbicides, and fertilizers are applied in soil in inappropriate amounts through foliar application. Fungicides, pesticides, and herbicides are a mixture of chemical substrates that can be used to control, prevent, or destroy any pests, microbes, or unwanted herbs that infect crops and reduce crop production [3][14][15]. Algicides, herbicides, fungicides, pesticides, and plant disinfecting agents are the main nano-enabled products considered for crop protection nowadays. More recently, nano-based stretch films made with polyethylene have been developed for hay packing to protect crops against UV-rays and thunder and have been used in active food packaging systems to protect against Escherichia coli spoilage [16]. The 40 plant-protection, nano-enabled products are available in the commercial market in 12 countries and were developed by 16 companies. Among all 40 products, 13 products are widely used for crop protection and disease management (Table 1).
Table 1. Number of nano-enabled products, manufacturing firms, and the countries involved in plant-protection related products.
* Note: detailed information on used NPs is missing such as concentration and particle size of NPs.

Pesticides kill unwanted, undesirable substances like fungi, algae, and bacteria, and make plants resistant to them. The major difficulty associated with pesticides is their solubility because they are not easily soluble in water and release very slowly after spraying, thus making them ineffective [17]. Therefore, with the aid of NT, nano-pesticides enclosed within a shell made with the support of NPs are being prepared [18][19]. These nano-pesticides reduce soil run-off while also increasing solubility [18][20].

Some insecticides are not fully soluble in water and thus, must be dissolved in organic solvents, making them toxic and also increasing the cost of the pesticide [17][21][22]. Nevertheless, the use of NPs could enhance the solubility of insecticides besides reducing toxicity. Modified chitosan and porous silica-based NPs have been effectively loaded into insecticides, and less water-soluble pesticides can be prepared [18][20][23]. In Spodoptera litura ovarian cell lines, hydrophobic insecticides such as azadirachtin with improved chitosan NPs demonstrated a promising decrease in cell proliferation and the sustained release of drugs [24]. The potential advantages of NPs were underlined in all of this research. The use of a solid–lipid mixture of NPs also solved the evaporation, or volatilization, issue correlated with the post-application of insecticide [25][26]. Insecticides applied as a mixture with NPs were observed to be useful in slowing down the release of active molecules that could help to reduce the toxic impacts of insecticides [27][28].

The most explored and beneficial NPs as fungicides are chitosan, silica, and polymer mixtures [14][29]. The efficacies of nano-fungicides have been noted against a variety of fungal species; however, they have rarely been tested on the crops without any toxic effects [30]. Generic insecticides possess problems such as low water solubility, poor stability, and a volatile nature that may disturb the sustained release [25]. These issues could be resolved by applying NPs-based fungicides. Low-water-soluble fungicides such as chitosan-lactide copolymer were loaded onto NPs in various concentrations, and their effectiveness was monitored as a growth inhibitor of Colletotrichum gossypii [31]. An eco-friendly alternative to current synthetic fungicides is predicted to play a major role in future plant disease management [14][25][32].
In vitro tests for some repressive features of NPs such as Cu-NPs, CuO-NPs, Ag-NPs, and ZnO-NPs against economically relevant foliar and soil-borne plant diseases were conducted [25]. The Cu-NPs were found to be the most effective at inhibiting mycelial development (EC50 values of 162 to 310 μg/mL), followed by ZnO-NPs (EC50 values of 235 to 848 μg/mL), and were practically insensitive to all fungal species, whereas Ag-NPs had a considerable inhibitory effect on Botrytis cinerea [33]. Furthermore, when NPs and their bulk equivalents were evaluated for antifungal activity, ZnO-NPs were found to be more effective against all fungal species than ZnSO4. The Cu-NPs were also shown to be more effective than CuSO4 against all species, excluding B. cinerea, A. alernata, and M. fructicola [33]. The absence of any link between NPs and their corresponding bulk metal and the positive association between Cu-NPs and CuO-NPs toxicity indicates potential changes in the mode of action between bulk- and nano-sized metals [25]. Although there is considerable diversity between fungal species, the toxicity of all NPs rose significantly when applying to spores instead of fungal hyphae [34]. This reveals that these compounds have a high potential for application as protective anti-fungal treatments.

Herbicides are used to kill weeds and unwanted grasses. They possess high levels of toxicity and a long half-life and are frequently unaffected by standard treatment. Generally, weeds grown along with crops affect the growth and yield of crops, and hence, traditional herbicides are applied to restrict the growth of undesired weeds. However, the application of herbicides might affect plant growth and development [35]. In this context, nano-herbicides can be effectively used to solve such type of issues [36][37]. The nano-herbicides are easily dissolved in soil particles and kill the weeds and could be designed in a form that is less hard on crops.
Nano-enabled herbicides are shown to have the remarkable potential to destroy weeds and improve crop yields [36][38]. Moreover, NPs applied as a mixture with certain herbicides such as atrazine, ametrine, triazine, and the effectiveness of these nano-enabled herbicides improved by 84% [39][40]. A commonly used herbicide to eliminate weeds and unwanted grasses is atrazine [41]. Once weeds are destroyed by herbicides, the nutrients available in the soil remain solely accessible for plants; consequently, plants develop resistance to diseases caused by nutrient deficiencies [38]. Moreover, the use of modified NPs in combination with carboxymethyl cellulose could also improve pesticide breakdown efficiency [42][43].

Nutrient use efficiency (NUE) is a worldwide concern due to the poor efficiency of applied nutrients [44]. Fertilizers are vital agricultural products that enhance crop production. In farming ecosystems, fertilizer contributes up to 35–40% of the productivity of any crop [45]. Without the application of fertilizers in crops, it becomes difficult to expect the required production. For this reason, a large amount of fertilizer is applied to crops in every country [46]. Due to the subsidy on fertilizers, the excess use of fertilizer has increased the amount of nitrates in groundwater, which causes nitrate pollution. In the last few years, use efficiencies of N, P, and K fertilizers remained constant as 30–35%, 18–20%, and 35–40%, respectively, leaving a higher portion of added fertilizers to stay in the soil or enter the aquatic system causing eutrophication [6][47].
To resolve the problem of fertilizer accumulation, nano-enabled fertilizers could be used by regulating the release of nutrients depending on the requirement of crops. However, now, few nano-fertilizer formulations are being synthesized in China, Germany, and the USA, and few are being tested under laboratory conditions [30]. The use of nano-fertilizers can increase the NUE and prevent environmental hazards [48]. Recent works also focused on carbon nanotube-based fertilizers [49]. Carbon nanotubes carry extensive surface area and could regulate moisture under the constraints of irrigation or drought conditions [30][50]. At present, more than 102 nano-enabled fertilizer products are available in the commercial market in 17 countries and have been developed by 41 companies. Among all 102 products, five nano-products are widely used in crop production.

More
© Text is available under the terms and conditions of the Creative Commons Attribution (CC BY) license; additional terms may apply. By using this site, you agree to the Terms and Conditions and Privacy Policy.
Upload a video for this entry
Information
Subjects: Agriculture, Dairy & Animal Science
Contributor MDPI registered users' name will be linked to their SciProfiles pages. To register with us, please refer to https://encyclopedia.pub/register :
Vishnu D. Rajput
View Times: 201
Entry Collection: Environmental Sciences
Revisions: 2 times (View History)
Update Time: 16 Dec 2021
Table of Contents
1000/1000
Hot Most Recent