Submitted Successfully!
Thank you for your contribution! You can also upload a video entry related to this topic through the link below:
https://encyclopedia.pub/user/video_add?id=17172
Check Note
2000/2000
HIV-1 Gag Mutations in Protease Inhibitors Resistance
Edit
Upload a video
This entry is adapted from 10.3390/molecules24183243

Many anti-HIV drugs interfere directly with the viral life cycle by targeting key viral enzymes[1], e.g., reverse transcriptase inhibitors[2][3][4], integrase inhibitors[5][6], and protease inhibitors[7][8]. While such efforts are already hampered by the emergence of drug resistance mutations in the enzymes (e.g., in [9]), the scenario further worsens when viral enzyme substrates, such as Gag (HIV protease substrate), are found to synergistically contribute to drug resistance.
Gag and protease play key roles in the viral maturation process[10] where the immature HIV virion matures into the infectious virion after budding from the infected cell for the next replication cycle. Proteolysis of Gag by protease occurs during the early stage of this maturation (Figure 1A), in which the intact full length Gag precursor polyprotein is cleaved by the viral protease into functional subunits[10] . To inhibit this proteolysis, protease inhibitors (PIs) block protease activity in a competitive manner with Gag for protease binding[11]. 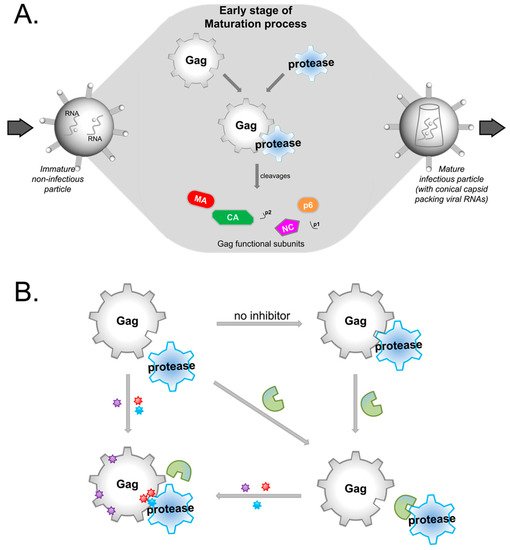 Figure 1. An overview of the Gag and Protease relationship. (A) A schematic of the early stage of viral maturation where HIV-1 Protease cleaves Gag into the functional subunits: Matrix (MA), capsid (CA), nucleocapsid (NC), p6, and two spacer peptides p1 and p2. (B) To inhibit viral maturation, protease inhibitors (PIs in green) are used to competitively inhibit protease binding of Gag. PI resistant mutations are denoted by colored stars, where those in the protease catalytic site are in blue, while those in Gag are red for cleavage sites, and purple for non-cleavage sites.

The Gag polyprotein consists of components matrix (MA), capsid (CA), nucleocapsid (NC), p6, and two spacer peptides p1 and p2. The MA subunit, located at the N-terminus, is essential for targeting Gag to the cell membrane, while the CA forms a shell to protect the viral RNA genome and other core proteins during maturation. The NC is responsible for RNA packing and encapsidation [12] while the two spacer peptides p1 and p2 regulate the rate and the sequential cleavage process of Gag by protease[13]. This process of viral assembly is complemented by viral budding moderated by the small Proline-rich p6. Mutations at either the N-terminal or C-terminal of these core proteins were reported to block viral assembly and impair Gag binding to plasma membrane, thereby inhibiting viral budding [12].
Since the Gag cleavage sites do not share a consensus sequence (Figure 2), the recognition of the cleavage sites by protease is likely to be based on their asymmetric three-dimensional structures[14] that would fit into the substrate-binding pocket of protease[15]. The cleavage of these scissile bonds (seven-residue peptide sequences unique for each cleavage site) are highly regulated and occur at differing rates [16][13][17]. The first cleavage occurs at the site between the p2 peptide and NC domain (Figure 2), followed by the MA from CA–p2 at a rate that is ~14-fold slower than that of the first cleavage, before proceeding to release p6 from the NC-p1 domain (at a rate ~9-fold slower than the first cleavage). At the last step, the two spacer peptides p1 and p2 are cleaved from NC-p1 and CA–p2 at rates ~350-fold and ~400-fold, respectively, slower than the initial cleavage[16][13][15][17]. 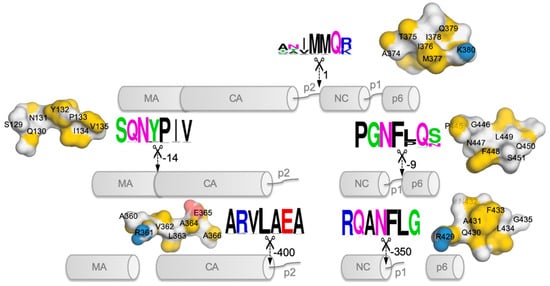 Figure 2. The sequential Gag proteolysis by Protease. The cleavage sites are marked by the 7-residues, along with the estimated cleavage rates [13] marked by arrows. For easy comparison, the initial cleavage site rate is set to the value of 1, while the other cleavage site values depict the reduced normalized rate. The cleavage site sequences are colored based on their physicochemical properties, e.g., hydrophobic (black), charged (positive: blue, negative: red), polar (other colors), and varied in text sizes based on positional conservation, using WebLogo[18][19]. Structural surface presentations of the cleavage sites are also attached for visualization.
To date, there are nine PIs, i.e., Saquinavir (SQV), Ritonavir (RTV), Indinavir (IDV), Nelfinavir (NFV), Fos/Amprenavir (FPV/APV), Lopinavir (LPV), Atazanavir (ATV), Tipranavir (TPV), and Darunavir (DRV) in clinical treatment regimes [15]. With increasing PI resistance[20][21][22][23] and cross-resistance[16][21][24][25] conferred by protease mutations that compromise viral fitness, there is a compromise between enzymatic activity and drug inhibition by protease within its 99-residue homodimer subunits. Mapped to the resistance to several current PIs[26][27][28][29], many mutations were found to spontaneously arise as part of the natural variance[30] selected for during the treatment regimes. These mutations directly intervene with PI binding via steric perturbation at the active site, and those distant from the active site allosterically modulated protease activity[31][32][33][34][35][36][37][38][39][40][41]. However, such mutations often reduce viral fitness, resulting in future repertoires of viruses with compromised fitness[42]. This fitness trade-off is then compensated by additional mutations that restore enzymatic activity to an extent [33][37][38][43].
To fully study the Gag–protease synergy, there is a need to study the limitations and mechanisms by which Gag mutations arise. Although the sequencing of clinical samples is the predominant source of HIV sequences, there are attempts to study and generate novel mutations [47][45][46][46]) for various HIV proteins. One example of such an effort[47] involved subjecting the Gag mRNA transcript to HIV reverse transcriptase (RT) to explore the repertoire of possible Gag mutations in the absence of drug or immune selection pressures. It was shown that clinically reported mutations could be generated and that the location and type of mutations incidentally avoided crucial locations and drastic changes. While such selection-free platforms can reveal the possible repertoires of Gag mutations for inhibitor design against emerging resistance, the large permutations require focusing through structural analysis for comparison to known clinical mutations taking into consideration the in-built mutational biases in the genetic code.
Characterized clinical Gag mutations[48][49][50][24][51][16] are sparse, with many reported to restore reduced binding to mutated proteases[48][49][50][24][51][16][52]. The lack of a high-resolution structure of full-length Gag for study of these mutations makes it difficult to analyze structurally the effects of these mutations on the whole Gag during its binding to protease. Fortunately, the recent full length model of Gag[53][54] allowed some investigation of non-cleavage site mutations.

3. The Role of Gag Mutations in Restoring Gag–Protease Synergy in PI Resistance

Figure 3. A schematic map of associated Gag–Protease drug resistant mutations. Mutation hotspots are shown on both the Gag and Protease, and representatives of paired combinations of Gag and Protease mutations are shown in boxes. More details can be found in Table 1. Gag mutations are colored according to domains: MA (red), CA (green), NC (magenta), and p6 (orange).

More
© Text is available under the terms and conditions of the Creative Commons Attribution (CC BY) license; additional terms may apply. By using this site, you agree to the Terms and Conditions and Privacy Policy.
Upload a video for this entry
Information
Subjects: Virology
Contributors MDPI registered users' name will be linked to their SciProfiles pages. To register with us, please refer to https://encyclopedia.pub/register :
darius wen shuo koh
,
Samuel Gan
View Times: 187
Revision: 1 time (View History)
Update Time: 29 Mar 2022
Table of Contents
1000/1000
Hot Most Recent