Submitted Successfully!
Thank you for your contribution! You can also upload a video entry related to this topic through the link below:
https://encyclopedia.pub/user/video_add?id=17168
Check Note
2000/2000
G-Protein-Coupled Receptors (GPCRs)
Edit
Upload a video
This entry is adapted from 10.3390/ijms222312987

Despite the identification of Aβ plaques and NFTs as biomarkers for Alzheimer’s disease (AD) pathology, therapeutic interventions remain elusive, with neither an absolute prophylactic nor a curative medication available to impede the progression of AD presently available. Current ap-proaches focus on symptomatic treatments to maintain AD patients’ mental stability and behav-ioral symptoms by decreasing neuronal degeneration; however, the complexity of AD patholo-gy requires a wide range of therapeutic approaches for both preventive and curative treatments. In this regard, this entry summarizes the role of receptors as a potential target for treating AD and focuses on the path of major receptors which are responsible for AD progression. This re-view gives an overall idea centering on major receptors, their agonist and antagonist and future prospects of viral mimicry in AD pathology. This entry aims to provide researchers and devel-opers a comprehensive idea about the different receptors involved in AD pathogenesis that may lead to finding a new therapeutic strategy to treat AD.

G-protein-coupled receptors (GPCRs) are membrane proteins that form the largest and most diverse group of cell surface receptors in eukaryotes. These receptors bind with G-proteins in the plasma membrane and activate cellular responses by detecting molecules from outside of the cell. GPCR is made up of a single polypeptide arranged in a globular shape with extracellular N-terminus and intracellular C-terminus encircling the plasma membrane seven times and hence are also known as seven-transmembrane (7TM) receptors [1].

G-proteins are heterotrimeric with three subunits made up of α, β and γ subunits. There are four main classes of G proteins: Gi that inhibits adenylyl cyclase; Gs that activates adenylyl cyclase; Gq that activates phospholipase C; and G12 and G13, of unknown function. Gα-subunit binds either to guanosine triphosphate or guanosine diphosphate, depending on the nature of its activity. In the absence of signaling molecules (inactive stage), GDP attaches to the Gα-subunit, and the whole Gα-GDP complex is bound to a nearby GPCR. However, on binding with any extracellular signals (active stage), a conformational change is observed in GCPR that leads to G-protein activation. This process replaces GDP with GTP in the Gα subunit, and eventually dissociates into Gα-GTP complex and Gβγ dimer, both attached to the plasma membrane. In its active form, both the complex and dimer structures relay messages within the cell by interacting with other membrane proteins (second messengers) such as cyclic adenosine monophosphate (cAMP), diacylglycerol (DAG), and inositol-1,4,5-triphosphate (IP3) [2].
The activated G-protein communicates a large number of second messenger small molecules, especially adenylyl and phospholipase C, to initiate and coordinate intracellular signaling pathways (Figure 1). When directed by the activated Gα-GTP complex, adenylyl cyclase acts as a catalyst for the synthesis of cAMP from ATP molecules, and phospholipase C acts as a catalyst for the synthesis of DAG and IP3 from the membrane lipid phosphatidyl inositol. In all mammals, cAMP has an important role in biological processes such as regulation of neurotransmitter synthesis, gene regulation, growth factors, immune function, hormone response, sensory input, and nerve transmission. Similarly, the activated Gα proteins are also involved in the activation of the mitogen-activated protein kinase (MAPK) and phosphatidylinositol 3-kinase (PI3K) pathways. Activation of PI3K and MAPK pathways result in the phosphorylation of protein kinase B (PKB) and extracellular signal-regulated kinases (ERKs), respectively. Eventually, activated PKB will phosphorylate and inhibit the action of GSK3β (glycogen synthase kinase 3β), a major kinase in the brain [3]. 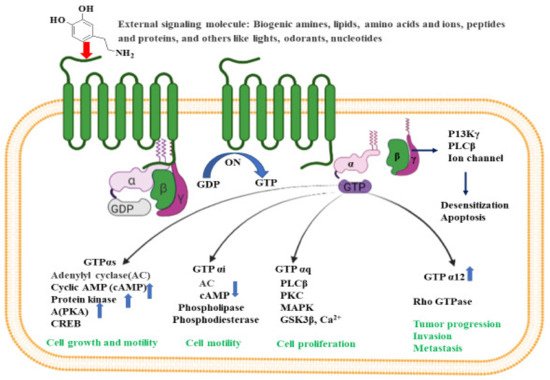 Figure 1. Intracellular signaling pathways for GPCR. Inactive GPCR exists as a complex unit consisting of α subunit bound to GDP and the βγ subunits. The binding of external signal molecules to a GPCR makes it active and results in a conformational change. During conformation, the GDP of α subunits forms to GTP, and the separation of α and βγ subunits occurs. When an active Gα subunit dissociates from the GPCR, it may interact with other proteins, triggering a signaling pathway that leads to cell growth and motility, cell proliferation, tumor progression, invasion, metastasis etc., depending on the binding proteins. The figure was created using tools obtained from BioRender.com.
Many physiological processes result from a signal (e.g., lipids, peptides, proteins, neurotransmitters, or stimuli from light and odors) binding to the GPCR. Through this process, receptors are activated and initiate the production of a number of secondary messengers that regulate bodily functions such as sensation, growth, pain, hormone response, immune response, mood and synaptic transmission making GPCRs a priority target for clinical drug development [4]. Nonetheless, due to its complex signaling pathways, studies have not yet identified these receptors as an AD drug development target.
GPCRs are involved throughout AD’s progression and the GPCR superfamily includes a wide variety of monoamine neurotransmitters, (e.g., serotonin (5-HT), dopamine, γ-aminobutyric acid (GABA), and norepinephrine (NE)), disrupted by AD pathology. Thathiah et al. describes the GPCR receptors as direct modulators of α-, β- and γ-secretases, APP (amyloid precursor protein) processing, and amyloid-β degradation, and have suggests that GPCRs could serve as a prospective therapeutic target for treating AD [5][6]. GPCRs regulate the sequential cleavage of APP by α-, β- and γ-secretases ultimately determining the degree of Aβ peptide generation and its direct and indirect influence on GPCR function [7]. This is accomplished by either stimulating GPCR or producing GPCR-based drug through the modulation of signal paths. For instance, PKC, cAMP–PKA, MAPK–ERK, and PI3K, could provide an alternative measure for neuroprotection, memory, and cognitive enhancement in AD patients.
Considered a good target for the development of novel therapeutics to treat AD pathology, GPCRs are involved in several pivotal neurotransmission and signaling processes such as glutamatergic, cholinergic, serotonergic and adrenergic that are interrupted in AD. These receptors regulate the formation of amyloid beta peptides [5][6], influence calcium homeostasis, involve memory functions [8], modulate microglial activation, and leading to the generation of Aβ peptide and APP cleavage in AD brains [9]. Subsequently, signal transduction routes interference, involves PKC, cAMP–PKA, MAPK–ERK, and PI3K, in numerous neurotransmitter systems, and could provide an alternative measure for AD patient neuroprotection, memory, and cognitive enhancement.
In vivo and in vitro studies performed on an AD transgenic mouse model and murine microglial cells have demonstrated that the effect of Aβ peptide on GPCR is dose dependent [10]. At a concentration of 5 µM and above, Aβ directly triggers the release of tumor necrosis factor α (TNF-α), whereas, at a sub threshold dose of Aβ, release is indirect and modulated by certain GPCR activators. The treatment sub threshold level of Aβ reduces GPCR kinase-2/5 (GRK2/5) in the plasma membrane leading to retarded GPCR desensitization, prolonged GPCR signaling, and cellular hyperactivity to GPCR agonists. The in vivo GRK dysfunction occurs at prodromal and early stages of AD [10]. GPCR signaling also monitors pre- and postsynaptic neurotransmission, which can lead to changes in synaptic plasticity, including long-term depression (LTD), long-term potentiation (LTP), depotentiation (reversal of LTP), and presynaptic vesicle release potential [11]. In this context, modulation of GPCR signaling and transduction is regulated by a family of RGS (a regulator of G-protein signaling) proteins. These protein components act as a negative regulator of GPCR-G protein signaling by acting as GAPs (GTPase activating proteins) for Gα subunits. RGS proteins play a critical role in neuronal signaling and are considered potential therapeutic targets for various neurological disorders including AD pathogenesis [11].

More
© Text is available under the terms and conditions of the Creative Commons Attribution (CC BY) license; additional terms may apply. By using this site, you agree to the Terms and Conditions and Privacy Policy.
Upload a video for this entry
Information
Subjects: Allergy
Contributor MDPI registered users' name will be linked to their SciProfiles pages. To register with us, please refer to https://encyclopedia.pub/register :
Samjhana Pradhan
View Times: 121
Entry Collection: Neurodegeneration
Revisions: 2 times (View History)
Update Time: 16 Dec 2021
Table of Contents
1000/1000
Hot Most Recent