Submitted Successfully!
Thank you for your contribution! You can also upload a video entry related to this topic through the link below:
https://encyclopedia.pub/user/video_add?id=17113
Check Note
2000/2000
Regulation of Hedgehog Signal Transduction
Edit
Upload a video
This entry is adapted from 10.3390/ijms222413338

The Hedgehog (Hh) family of secreted proteins governs embryonic development and adult tissue homeostasis in species ranging from insects to mammals. Deregulation of Hh pathway activity has been implicated in a wide range of human disorders, including congenital diseases and cancer. Hh exerts its biological influence through a conserved signaling pathway. Binding of Hh to its receptor Patched (Ptc), a twelve-span transmembrane protein, leads to activation of an atypical GPCR family protein and Hh signal transducer Smoothened (Smo), which then signals downstream to activate the latent Cubitus interruptus (Ci)/Gli family of transcription factors. Hh signal transduction is regulated by ubiquitination and deubiquitination at multiple steps along the pathway including regulation of Ptc, Smo and Ci/Gli proteins.

First identified in Drosophila and later shown to be conserved in vertebrates, the Hedgehog (Hh) family of secreted proteins plays essential roles in both embryonic development and adult tissue homeostasis; not surprisingly, dysregulation of Hh signaling has been linked to many kinds of human disorders including birth defects such as holoprosencephaly and Gorlin syndrome, as well as many types of cancer including basal cell carcinomas (BCC) and medulloblastoma (MB) [1][2][3][4]. Given the critical roles that Hh signaling plays, it is not surprising that the pathway activity is tightly regulated through multiple mechanisms at different layers including the expression of Hh ligands and other pathway components as well as the perdurance, localization and activity of individual signaling components to ensure appropriate pathway activities essential for cell growth, differentiation, and pattern formation. Among these regulatory mechanisms, post-translational modifications (PTMs) including phosphorylation, ubiquitination and sumoylation are prevalent in the regulation of Hh signaling outputs [3][5][6][7][8][9][10][11].
The Hh pathway is largely conserved from Drosophila to vertebrates (Figure 1) [3][12]. The core Drosophila Hh signal transduction pathway consists of a Hh ligand, a twelve-span transmembrane protein Patched (Ptc) that functions as the Hh receptor, a GPCR family of seven-span transmembrane protein Smoothened (Smo) that functions as the obligatory signal transducer, intracellular signaling complexes containing the kinesin-like protein Costal-2 (Cos2), the Ser/Thr kinase Fused (Fu) and the zinc finger transcription factor Cubitus interruptus (Ci) that regulates Hh target gene expression. Ci also exists in a separate complex with the Hh pathway inhibitor Suppressor of fused (Sufu). In the absence of Hh ligand, Ptc keeps the signaling pathway off by inhibiting Smo activity and preventing its accumulation on the plasma membrane. The Cos2/Fu recruits multiple kinases including protein kinase A (PKA), glycogen synthase kinase 3 (GSK3), and casein kinase 1 (CK1) to sequentially phosphorylate Ci [13]. Hyperphosphorylation targets the full-length Ci (CiF) for ubiquitin/proteasome-mediated proteolysis to generate a truncated form that acts as transcriptional repressor (CiR) of Hh target genes [14][15]. In the presence of Hh, binding of Hh to Ptc alleviates its inhibition of Smo [16], allowing Smo to signal downstream to block CiR production and promote CiF into an activator (CiA) form [13][17]. 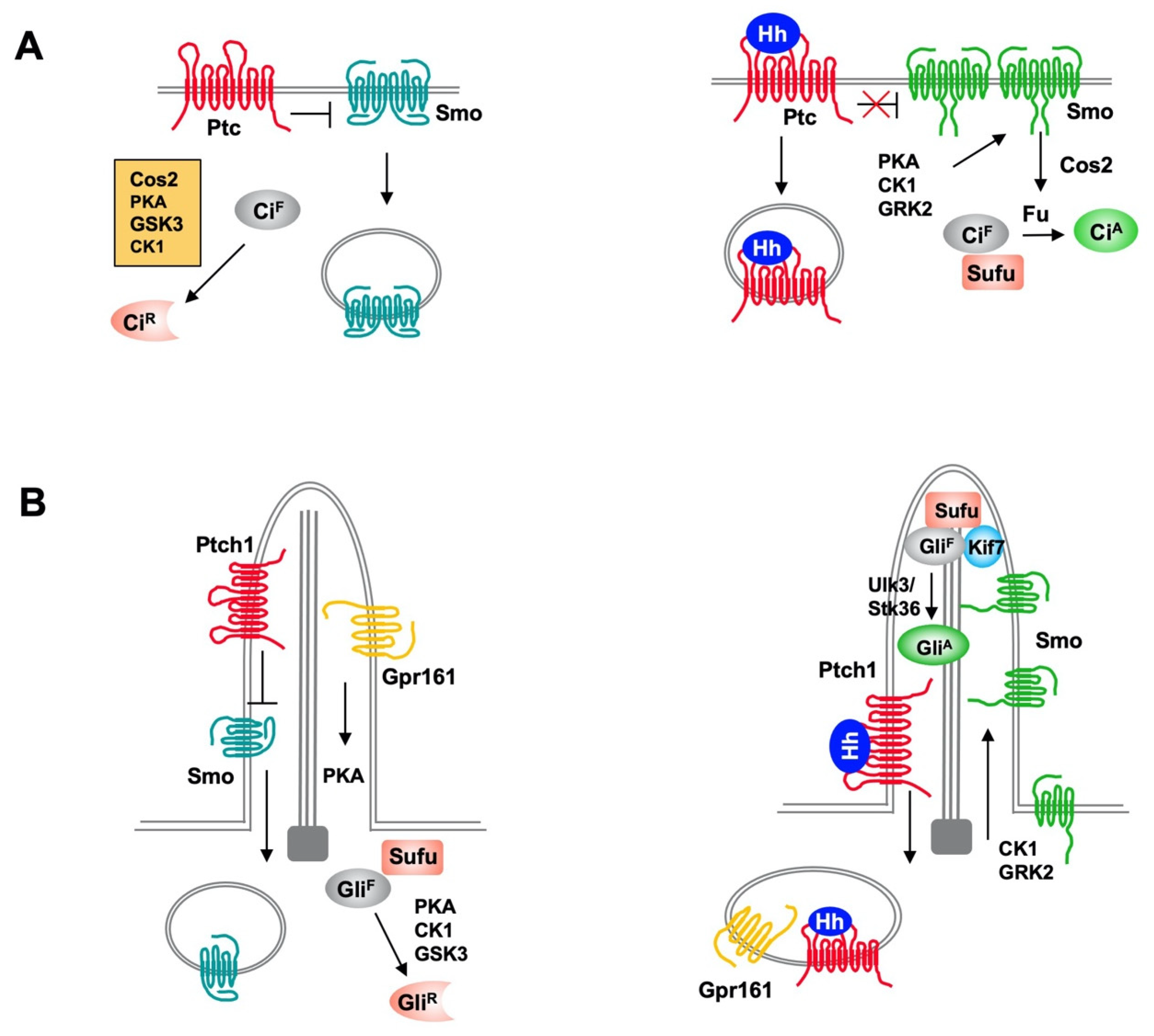 Figure 1. Hh signaling pathways in Drosophila and mammals. (A) In Drosophila, Ptc inhibits Smo activity and promotes its internalization and degradation in the absence of Hh. Full-length Ci (CiF) undergoes hyperphosphorylation by PKA, GSK3, and CK1, which is facilitated by Cos2, and phosphorylated Ci is proteolytically processed to generate a truncated repressor form (CiR) that inhibits Hh target gene expression. In the presence of Hh, binding of Hh inhibits Ptc activity and promotes Ptc internalization and degradation, and increases Smo cell surface accumulation and activity through PKA, CK1 and GRK2-mediated phosphorylation. Activated Smo blocks CiR production and promotes CiA formation by releasing Sufu-mediated inhibition of Ci through Fu. (B) In mammal, both the production of Gli repressor (GliR) and activator (GliA) depend on primary cilia. In the absence of Hh, ciliary localized Ptc inhibits Smo and promotes its ciliary exit and ciliary localized GPR161 activates PKA through local production of cAMP to promote Gli phosphorylation, which leads to processing of GliF to GliR. In the presence of Hh, Shh inhibits Ptc and induces ciliary exit of Ptc, allowing Smo to be activated and accumulated in cilia. Smo promotes ciliary exit of GPR161 to inhibits GliR formation and promotes GliA formation through Ulk3/Stk36-mediated phosphorylation of Gli.
Mammals have three Hh family proteins: Sonic hedgehog (Shh), Indian hedgehog (Ihh) and Desert hedgehog (Dhh); two Ptc proteins: Ptch1 and Ptch2; and three Gli family transcription factors: Gli1, Gli2, and Gli3, which regulate the expression of Hh target genes. The repressor (GliR) and activator (GliA) forms of Gli are derived mainly from Gli3 and Gli2, respectively. Gli1 is a transcription activator and direct transcriptional target of the Hh pathway. Hence, Gli1 acts in a positive feedback loop to amplify GliA activity. Vertebrate Hh signal transduction occurs at primary cilium, a microtube-based membrane protrusion found on most mammalian cells including cancer cells (Figure 1) [18][19]. Both the production of Gli repressor (GliR) and activator (GliA) depend on primary cilia. Hh induces reciprocal trafficking of Ptc and Smo within primary cilia with Ptc moving out of whereas Smo accumulating in cilia in response to Hh stimulation [20][21].

Hh signaling controls the balance between the repressor and activator forms of the Ci/Gli family of transcription factor. In the absence of Hh, full-length Ci/Gli is proteolytically processed to form truncated repressor (CiR/GliR) that lacks the C-terminal coactivator domain but retains the N-terminal corepressor domain. Hh signaling blocks the proteolysis of Ci/Gli and converts accumulated full-length Ci/Gli into activator form CiA/GliA. Both the production of CiR/GliR and abundance of CiA/GliA are regulated by the ubiquitin and proteasome system (UPS) (Figure 2) [8][22]. 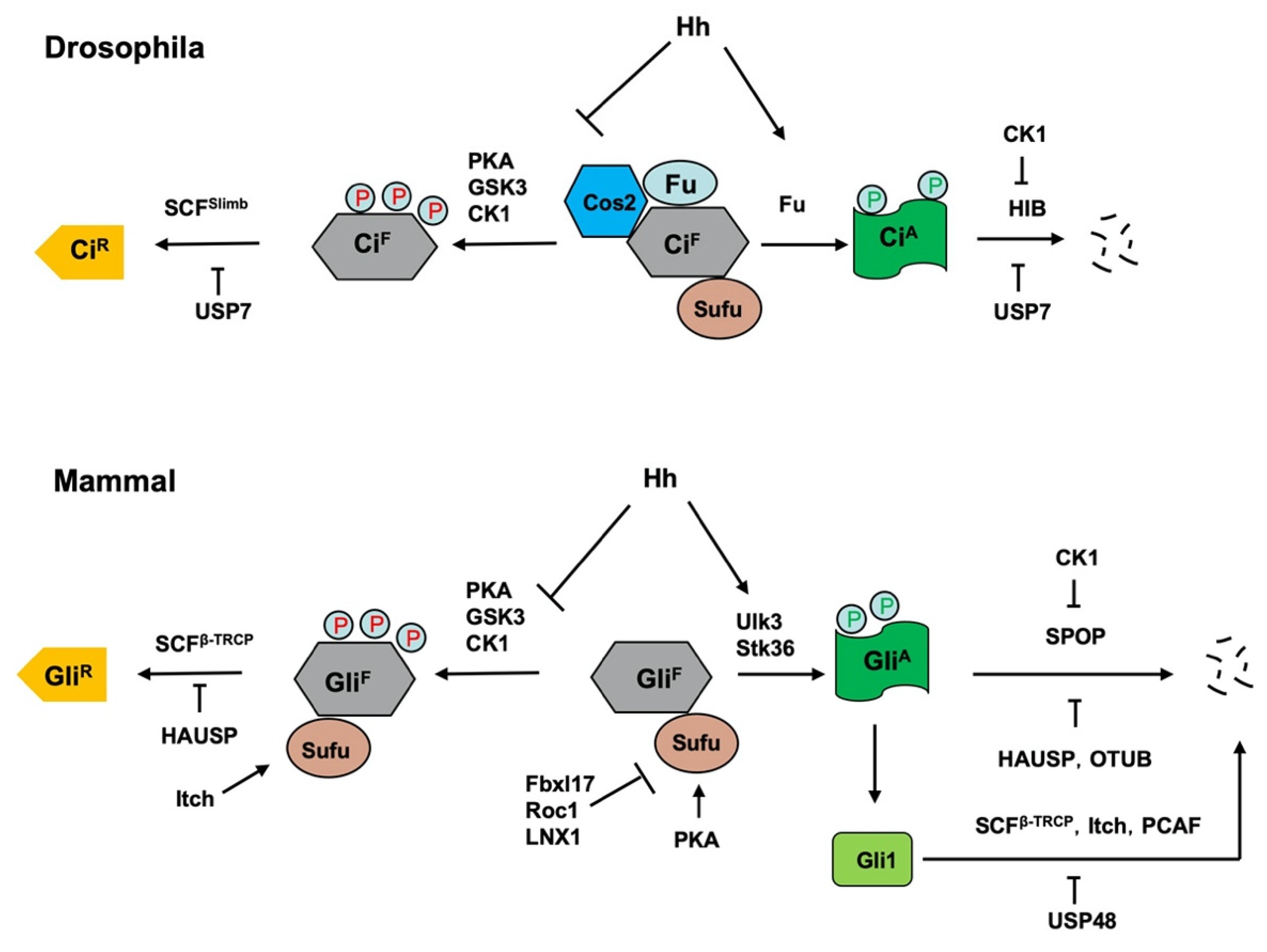 Figure 2. Regulation of Ci/Gli processing and degradation by E3s and DUBs. Hh signaling controls the balance between the repressor and activator forms of the Ci/Gli, which is regulated by the ubiquitin and proteasome system (UPS). In the absence of Hh, full-length Ci/Gli (mainly Gli3) is proteolytically processed to form truncated repressor (CiR/GliR) through PKA/GSK3/CK1-mediated phosphorylation, followed by SCFSlimb/SCFβ-TRCP-mediated ubiquitination. The DUB USP7/HAUSP antagonizes this process through deubiquitinating Ci/Gli. The E3 ligase Itch promotes GliR production by ubiquitinating Sufu to increase its interaction with Gli3. Hh signaling blocks the proteolysis of Ci/Gli and converts accumulated full-length Ci/Gli into activator form CiA/GliA though phosphorylation by the Fu family kinases. When dissociated from Sufu, CiA/GliA becomes labile and is degraded by HIB/SPOP, a process that is attenuated by CK1-meidated phosphorylation of Ci/Gli. The DUBs USP7/HAUSP and OTUB deubiquitinate Ci/Gli to inhibit its degradation. The E3 ligases SCFβ-TRCP, Itch and PCAF promote Gli1 degradation while the DUB USP48 antagonizes this process. In addition, mammalian Sufu is degraded by multiple E3 ligases including Fbxl17, ROC1 and LNX1.

The intracellular Hh signal transduction pathway contains several conserved signaling components including the kinesin-like protein Cos2/Kif7, the Fu family kinases Fu/Ulk3/Stk36, and the tumor suppressor Sufu [3]. In Drosophila, Cos2 and Fu form a complex to promote Ci phosphorylation, ubiquitination and proteolytic processing to form CiR in the absence of Hh [13]. In response to Hh stimulation, Cos2 recruits Fu to activated Smo to induce Fu dimerization/oligomerization, autophosphorylation and activation [23][24]; activated Fu then phosphorylates Ci to convert it into CiA by altering its binding to Sufu [17]. In mammalian cells, Kif7 also plays a dual role in regulating the formation of both GliR and GliA [25][26][27]; however, the underlying mechanisms remain obscured although Kif7 has been shown to organize the cilium tip compartment where Gli is thought to be activated [28][29]. The Fu family kinases Ulk3 and Stk36 play a partially redundant role in phosphorylating and activating Gli proteins by alleviating Sufu-mediated repression [17]. Several studies revealed that both Cos2/Kif7 and Sufu are regulated by the UPS.

Like all other developmental signaling pathways, Hh signaling is under strict regulation in development and adulthood to avoid developmental errors and malignancies. Ubiquitination- and deubiquitination-mediated proteolysis plays a particularly important role in the regulation of this pathway. Despite intensive investigations in the past two decades that lead to the identification of many E3s and DUBs involved in regulation of Hh signaling, the physiological roles of many of these regulations have remained unclear or not been fully explored. For example, ciliary exit of Ptch1 might not be absolutely required for Hh pathway activation but rather could modulate the amplitude or perdurance of pathway activity because one study showed that Hh could elicit pathway activity in cells expressing Ptch1 variants that failed to exit primary cilia [30]. Similarly, although Sufu is ubiquitinated and downregulated in Ptch1 mutant cells, whether and to what extent Sufu downregulation is essential for Hh pathway activation during development remain unclear. The involvement of multiple E3s that function partial- redundantly in the regulation of Ptc/Ptch1 and Smo makes it challenging to dissect the role of individual E3s in Hh signaling. A related question is how the specificity or selectivity of E3s is achieved. For example, multiple Nedd4 family members are involved in the regulation of Drosophila Smo whereas only Wwp1 but no other Nedd4 family members are involved in ciliary trafficking of mammalian Smo. Other outstanding questions include why binding of Wwp1 to Ptch1 does not promote Ptch1 ubiquitination and ciliary exit, how Ptch1 ubiquitination and ciliary exit are stimulated by Hh, and why Slimb/β-TRCP-mediated ubiquitination promotes Ci/Gli processing whereas HIB/SPOP-mediated ubiquitination promotes complete degradation.
Because deregulation of Hh signaling has been implicated in many types of cancer [3], targeting the Hh pathway has become an attractive strategy for cancer therapy. The identification of multiple E3s and DUBs that participate in the regulation of Hh signaling and the elucidation of their roles in cancer have opened the door for developing novel therapeutical strategy to treat Hh-related cancer. In this regard, several E3 ligases and DUBs are emerging as interesting therapeutic targets in various Hh-related tumors given their positive roles in Hh signaling [10]. However, it remains challenging to develop more efficient and selective inhibitors of E3 ligases and DUBs for anti-cancer therapy without affecting normal physiology.

More
© Text is available under the terms and conditions of the Creative Commons Attribution (CC BY) license (http://creativecommons.org/licenses/by/4.0/)
Upload a video for this entry
Information
Subjects: Developmental Biology
Contributor MDPI registered users' name will be linked to their SciProfiles pages. To register with us, please refer to https://encyclopedia.pub/register :
Jin Jiang
View Times: 47
Revisions: 3 times (View History)
Update Time: 15 Dec 2021
Table of Contents
1000/1000
Hot Most Recent