Submitted Successfully!
Thank you for your contribution! You can also upload a video entry related to this topic through the link below:
https://encyclopedia.pub/user/video_add?id=17100
Check Note
2000/2000
Neural Mechanisms of Coping with the Sounds
Edit
Upload a video
This entry is adapted from 10.3390/brainsci11121553

Listening to music, by definition, refers to the sensorial act of processing acoustic features by the auditory system. Hence, a description in terms of the objective acoustic characteristics may help to tackle some of the elusive aspects of possible causal relationships between music and its effects by describing at least the stimulus side of the music processing chain (input).

1. Aesthetic Listening and the Generation of Pleasure

Neuroscience has provided major insights into the positive effects of aesthetic music listening by focusing on the localization and connectivity of so-called hedonic hotspots in cortical and subcortical regions of the brain, and by examining the role of neurotransmitters in the modulation of the physical and physiological responses to the music.
The generation of pleasure—both in its sensorial and conscious aspects— depends mainly on a network of strongly connected hedonic hotspots within the mesolimbic pathway. They have adaptive values by helping us to want, to like, and to learn about stimuli that may possibly ensure survival, and are found along the reward circuitry in the nucleus accumbens (NAcc), the insula, the orbitofrontal cortex (OFC) and the ventral pallidum [1][2]. The subcortical hedonic hotspots are responsible for the simple and spontaneous core liking reactions to pleasurable stimuli, whereas the involvement of cortical prefrontal structures is needed for the conscious feelings of wanting or incentive salience during the appetitive phase [3][4], this network shows an interplay between more evolved neocortical areas and evolutionary older areas of the brain.
Most investigations, however, have concentrated on cortical and subcortical “telencephalic sites” of aesthetic and emotional processing, such as, e.g., the dorsal and ventral striatum and amygdala, somewhat in line with a very recent meta-analysis on music listening and imagery (see Figure 1) [5]. Yet some evolutionary older levels, such as the brain stem, which houses several auditory processing mechanisms as well as core mechanisms for homeostatic regulation, have been left out to some extent, due partially to the technical difficulties of brain stem imaging, but also to the lack of theoretical frameworks for its role in hearing as related to the mechanism of homeostasis [6]. These older levels are important, however, in the sense that a distinction has been proposed between fast and slow routes of affective evaluative processes: the fast route is a primary route to the positive or negative appraisal or evaluation of stimuli, relying on quick and automatic brain responses, mostly below the level of consciousness and originating mainly in the brainstem, the primary sensory cortices, and the limbic system; the slow route, on the contrary, involves the evolutionary more evolved structures of the brain, such as the prefrontal cortex with outcomes such as the conscious liking or appraisal of a piece of art or music [7][8][9]. 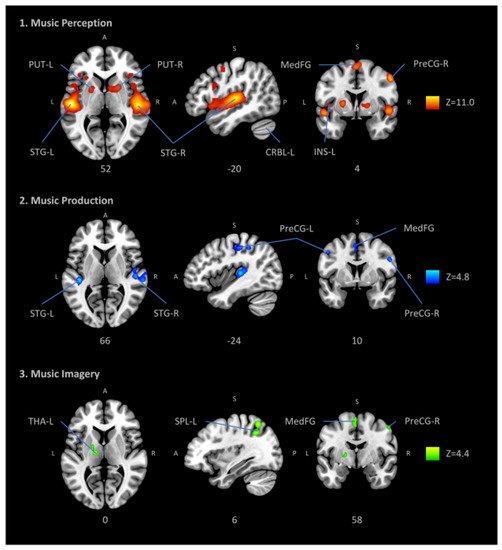 Figure 1. Automatic meta-analysis obtained with neurosynth.org of 163 studies utilizing the fMRI methodology and including “music” as keyword. Brain structures related to audition (supratemporal cortex), motor control (dorsomedial prefrontal cortex and cerebellum), body awareness (insula) and reward (ventral striatum) are visible. ROIs: PUT putamen, STG superior temporal gyrus (primary auditory cortex), MedFG medial frontal gyrus, CRBL cerebellum, INS insula, PreCG precentral gyrus (primary motor cortex or M1), THA thalamus, SPL superior parietal lobule, Z peak Z-value. (Figure reproduced without modification from [5]. (© Springer, Creative Commons Attribution))
Besides these structural issues, neurochemical research has also identified the impact of neurotransmitters on the affective aspects of music listening. The study of combined psychophysical, neurochemical, and hemodynamic effects, in particular, may reveal peaks in the autonomic nervous system activity, which explain also the effects of music on mood (e.g., [10]. Studies with ligand-based position emission tomography—using radioligand raclopride that binds with dopamine—have shown that strong emotional responses to music lead to dopamine release in the mesolimbic striatal system together with sensory regions for auditory reception while listening to highly pleasurable music [11][12].
Some findings have been even more ground-breaking, with an unforeseen functional dissociation between the “anticipatory phase” of peak emotional experiences with dopaminergic activity in the caudate nucleus, and the “consummatory phase” of the actual experience with activity in the nucleus accumbens. This dopamine release, immediately before the climax of emotional experiences, in the caudate, is of considerable importance, as this region is highly interconnected with limbic regions such as the amygdalae, hippocampus, cingulate and ventromedial prefrontal cortex, which all mediate emotional responses. The findings point also to the direction of two distinct anatomical pathways that play different but complementary roles in the emotional experience of music, mapping somewhat onto the “wanting” and “liking” dimension of music appreciation ([13], see also [14]).
Care should be taken, however, not yet to generalize too much about the role of dopamine release. Even if it underlies both the appetitive and consummatory phases of reward, the peak of the pleasure experience and the hedonic properties or subjective pleasure that is associated with obtaining a reward may depend on the release of other neurotransmitters such as endogenous opioid peptide releases in the hedonic hotspots in the nucleus accumbens, which is a region that is implicated also in the euphoric components of psychostimulants such as, e.g., cocaine [15][2][16][17][18][19] (see also [6]). This could challenge the common view that dopamine is causally related to music-evoked pleasure through the engagement of the hedonic hotspots in favor of a milder claim that it should arise from motivational signals and cognitive appraisal so as to increase the attractiveness of the surrounding environment and to strengthen the efficacy of rewarding stimuli [19]. As such, it should intervene in the processing of diverse types of pleasures, as is the case in aesthetic experiences [15][2]. Somewhat generalizing, it can thus be stated that listening to pleasurable music is associated with activation of the NAcc and its interactions with brain structures that regulate autonomic, emotional, and cognitive functions. There is, as such, a strong link between emotional and cognitive systems which link the orbitofrontal cortex with mesocorticolimbic dopaminergic circuitry (NAcc and VTA) [15].