Submitted Successfully!
Thank you for your contribution! You can also upload a video entry related to this topic through the link below:
https://encyclopedia.pub/user/video_add?id=17077
Check Note
2000/2000
Enzymatic Paper-Based Point-of-Care Testing for Type-2 Diabetes
Edit
Upload a video
This entry is adapted from 10.3390/bios11120482

A point-of-care (POC) can be defined as an in vitro diagnostic test that can provide results within minutes. It has gained enormous attention as a promising tool for biomarkers detection and diagnosis, as well as for screening of chronic noncommunicable diseases such as diabetes mellitus. Diabetes mellitus type 2 is one of the metabolic disorders that has grown exponentially in recent years, becoming one of the greatest challenges to health systems. Early detection and accurate diagnosis of this disorder are essential to provide adequate treatments. Diabetes-monitoring tools must be accessible and affordable; thus, POC platforms are attractive, especially paper-based ones. Paper-based POCs are simple and portable, can use different matrixes, do not require highly trained staff, and are less expensive than other platforms. These advantages enhance the viability of its application in low-income countries and hard-to-reach zones.

Detection of biomarkers is essential for early diagnosis and good disease management, but their low abundance and complex biological surrounding makes their detection and quantification challenging. Conventional methods for their determination usually require lengthy analysis times, expensive reagents, sophisticated equipment, and specialized personnel [1][2]. In this context, paper-based platforms are an attractive alternative for biomarker detection with broad advantages, as they are simple, robust, and cost-effective [1][3]. Paper-based point-of-care (POC) devices allow for reduced testing time and reagent volumes and do not require specialized equipment or personnel, making a large-scale screening strategy more feasible [4][5]. This renders them especially useful in remote communities and low-income countries where the budget, specialized personnel, and health infrastructure are not available to perform analytical methods such as mass spectrometry, chromatography, or immunological methods on a mass scale [1][6]. Moreover, their successful application has been reported for environmental [5], food [7][8], and clinical diagnostic analysis [9][10]. A POC test must offer clear advantages over traditional centralized laboratory testing regarding cost, convenience, or improved quality of care, equaling or exceeding sensitivity and accuracy requirements [11]. Furthermore, these considerations should be addressed starting with the early stages of prototype design.
Most reported paper-based platforms comply with the World Health Organization’s “ASSURED” (Affordable, Sensitive, Specific, User-friendly, Rapid and Robust, Equipment-free, and Deliverable to end-users) criteria; which are guidelines for the evaluation of diagnostic tests that any test designed for application in developing countries are recommended to fulfill [12][13][14]. The Special Programme for Research and Training in Tropical Diseases (TDR) originally proposed the ASSURED criteria for evaluating diagnostic tests for infectious diseases [14]. However, it has been extended as per the requirements for any POC for diagnostic purposes, especially those intended for low and middle-income countries.
Early detection and management are of particular relevance in chronic noncommunicable diseases (NCDs) due to the generation of complications that significantly impact the life quality of patients and can even lead to death. NCDs, particularly cancer and cardio-metabolic diseases such as cardiovascular disease, arterial hypertension, and type 2 diabetes (T2DM), are undoubtedly among the greatest challenges for health systems in low- and middle-income countries like Mexico [15][16]. T2DM is one of the fastest-growing global health emergencies of the 21st century. Currently, almost 500 million people live with diabetes in the world. It is estimated that by 2030 this number will reach 578 million and 700 million by 2045 [16]. T2DM is a chronic metabolic disease characterized by elevated blood glucose levels due to deficiency in insulin production and secretion in pancreatic β-cells, the development of insulin resistance in tissues, or a combination of both mechanisms [17][18]. The insufficiency of detection technologies accessible and cost-effective that adequately reflect glycemic changes has negatively impacted T2DM screening, diagnosis, and monitoring, particularly in low- and middle-income countries.
Clinically validated paper-based platforms may be a starting point for developing continuous monitoring devices that can be added to existing wearables such as smartwatches [1][19]. This would be particularly relevant in T2DM because it is known that fluctuations in glycemic levels occurring at specific times during the day can lead to severe complications despite mean fasting glycemic values remaining in the normal range.
Although multiple proofs-of-concept of POC platforms have been reported, and some of them have even been successfully evaluated with human samples for clinical validation, their market entry has not been achieved. These products require large-scale validation studies and regulatory approvals to enable their commercialization [19]. It is important to consider that the values of accuracy, sensitivity, and specificity obtained at the research level for the reported POC platforms should be taken as a valuable benchmark for choosing the best-performing systems for the analytical determination of the biomarkers of interest in order to guide the development and optimization of new platforms. However, these platforms cannot be immediately transferred to the clinical setting. These parameters should be evaluated with greater scrutiny during the clinical validation process using real patient samples and under the standards of international organizations, comparing, if possible, against certified and standardized methods. The high cost, lengthy development time, and required regulatory filings are challenges to the market implementation of new POC devices; however, it is clear that new tools for screening, early diagnosis, and monitoring are needed to combat the current T2DM pandemic [10][14].
Paper-based devices are platforms with the potential to generate robust, sensitive methods that detect metabolic changes in the medium and short term that do not require specialized equipment or personnel, and they must be affordable to allow their large-scale use even in low-income and remote locations. Using biological fluids other than blood could generate non-invasive devices. The development of tools of this type could positively impact the incidence, improve management, and reduce the prevalence of underdiagnosis of T2DM. Furthermore, continuous monitoring devices and POCs bring us even closer to the goals of personalized medicine. However, it is essential to consider that there are still challenges and areas of opportunity for developing and implementing these platforms, which must be addressed to allow their successful entry into the market.

Glucose is a six-carbon sugar, one of the most abundant in nature, and is the central element of human energy metabolism. Moreover, it is the main marker for the diagnosis of diabetes [20][21]. Glucose is an excellent model marker for developing paper-based POC devices due to its price, accessibility, ease of handling, lack of toxicity, relative chemical stability, high water solubility, and presence in relevant concentrations in various biological fluids [21][22]. Blood is the fluid of choice for the determination of biomarkers, and glucose is no exception. The reference range for fasting blood glucose in healthy individuals is 70–100 mg/dL [23][24]. Values below and above the reference range are relevant to health status, with low values being considered hypoglycemia and above being considered hyperglycemia. When values are greater than 125 mg/dL in two or more tests, it is possible to diagnose diabetes [23][24]. The intermediate stage with values of 100 to 125 mg/dL is defined as prediabetes and is a high-risk state for the development of T2DM [23][25]. The methods for blood glucose determination are well established, calibrated, and automatized, but sample collection is invasive, uncomfortable, and potentially painful. Most are enzyme-based, especially those based on glucose oxidase (GOD) with detection by colorimetry or electrochemistry [21][26]. The first generation of glucose biosensors is based on producing and detecting peroxide with oxygen as a cosubstrate (Equation (1)). This reaction involves the reduction of the flavin group (FAD) in the enzyme to generate the reduced form of the enzyme (FADH2) (Equation (2)) [27][28][29]. 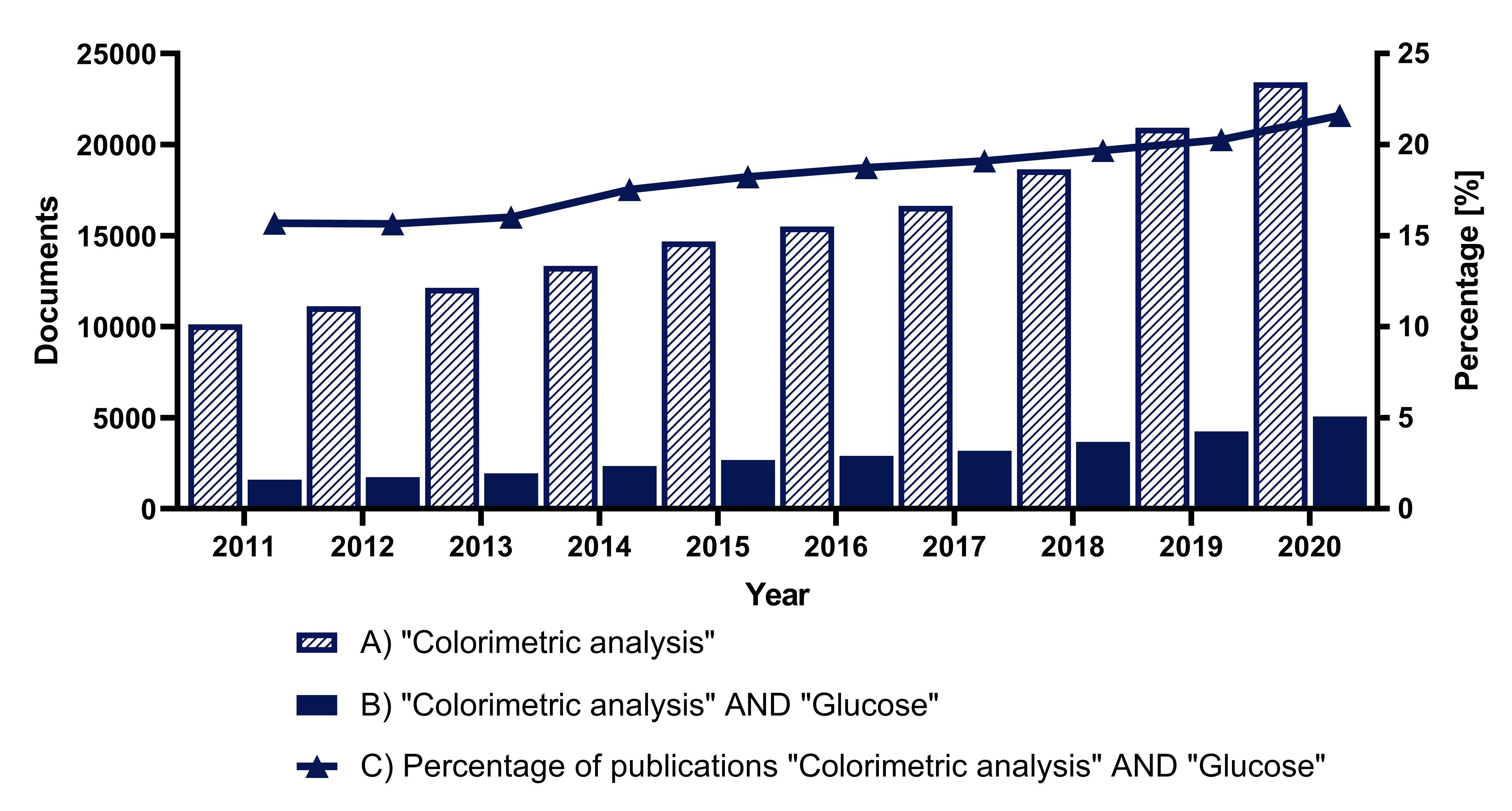