Submitted Successfully!
Thank you for your contribution! You can also upload a video entry related to this topic through the link below:
https://encyclopedia.pub/user/video_add?id=17036
Check Note
2000/2000
Self-Incompatibility in Orchids
Edit
Upload a video
This entry is adapted from 10.3390/ijms222312901

Self-incompatibility (SI) refers to the inability of hermaphroditic angiosperms to self-pollinate, which promotes outcrossing or hybridization.

1. Morphological Types of SI in Orchidaceae

Many traits are used to measure the SI of orchids. Pollen tube growth, fruit set, and seed abortion rate are often used as the main indicators of SI, especially the growth of the pollen tube, as it is one of the most direct and important indicators of SI [1][2]. Although SI has been reported in various orchid groups, it is most common in a few groups, such as Dendrobiinae (i.e., Dendrobium) [3], Pleurothallidinae [4], Oncidiinae [5][6], Malaxidinae [7][8][9], Laeliinae [5][10], Aeridinae [11], Angraecinae [11], and Neottieae (i.e., Epipactis) [5], which all belong to the subfamily Epidendroideae (Figure 1). Here, we mainly review the pollen tube growth in orchid SI species. 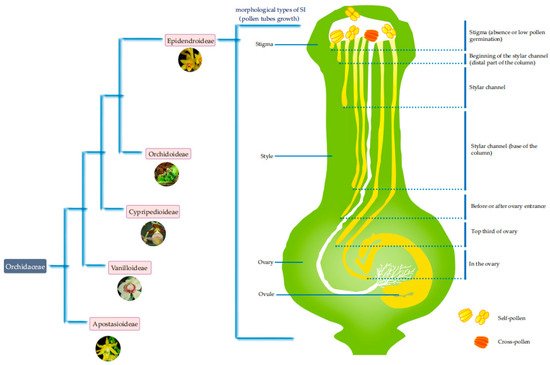 Studies of the SI of the subtribe have focused on Dendrobium. Dendrobium is the second largest genus in Orchidaceae (second only to Bulophyllum) [12], with approximately 1450 species. It is a perennial epiphytic herb that is mainly distributed in tropical, subtropical, and temperate regions of Oceania and Asia [13].
By conducting more than 1700 pollination experiments on 61 species of Dendrobium [3], Johansen found that 44/61 (72%) of the species had wilted and yellowed ovaries and showed self-sterility after self-pollination. Among the remaining 17 fruit-producing species, the fruit ripening time and seed quality varied considerably. Analysis of the development of the self-pollenated tubes of D. fameri (SI) suggested that it was consistent with the GSI phenotype given that the pollen tubes enter the style. This study indicated that some species of Dendrobium showed the GSI phenotype. Niu et al. [14] studied 26 representative species of Dendrobium and analyzed the pollen tube growth of 13 species. Four kinds of pollen tube growth phenotypes were observed in self-incompatible species: (1) pollinia did not germinate; (2) the pollen tube stopped growing at the top of the style; (3) the pollen tube stopped growing at a specific position in the stylar channel, mostly at the upper third of the stylar channel; and (4) the pollen tube stopped growing in the upper third of the ovary. For example, the pollen tube of D. densiflorum stopped growing just before or after the style entrance one day after self-pollination. The self-pollinated pollen tube of D. chrysanthum stopped growing at the upper third of the style three days after self-pollination. The pollen tube of D. lindleyi stopped growing at the point before or just after the ovary entrance [14]. The growth of the pollen tube in more than half of the self-incompatible species stops in the style, and these species are distributed in different branches of Dendrobium phylogenetic tree [14][15], which is the main SI phenotype and consistent with the GSI phenotype. The diverse pollen germination and pollen tube growth phenotypes suggest that there might be more than one molecular mechanism of SI in Dendrobium species.
All these results show significant differences to those of molecular mechanisms known in other angiosperm families. There is a surprisingly high SI phenotype diversity in orchids, even in one genus, while there is only one SI phenotype described in other angiosperm families with their molecular mechanisms known, respectively. Furthermore, the emergence times of the SI phenotypes after self-pollination varies from species to species, mostly at three to five days, but even at two to three weeks, which much longer than that (mostly from tens of minutes to hours [16][17]) in other angiosperm families with their molecular mechanisms known. Therefore, investigation of more other orchids SI species is needed, which may reveal more SI phenotypes.

SI analysis of Restrepia, belonging to clade B [4] of the Pleurothallidinae, revealed that 45% of the species are self-incompatible, and seed abortion is lower for cross-pollinated plants (both intraspecific and interspecific cross-pollination) than for self-pollinated plants. Pollen tubes fill the entire ovary after three weeks of cross-pollination, but the number of self-pollinated pollen tubes decreases significantly and stops growing in the upper third of the ovary, as is the case in the R. brachypus [1]. The genus Acianthera belongs to clade C [4] of the Pleurothallidinae. After self-pollination, the pollen tube growth of A. fabiobarrosii stops in the style. Aside from the style, the ovary was found to be the second reaction site of SI, and it might be an extension of the SI reaction in the style [18].
In addition to pollen tubes, some Pleurothallidinae individuals can produce fruits with no seeds after self-pollination [4][19]. Seed abortion of A. johannensis after self-pollination may be caused by SI or by inbreeding depression [20]. What’s more, in Anathallis sclerophylla, A. heterophylla, and A. rubens, nearly all pollen grains do not germinate after self-pollination, which is a typical SSI phenotype [21], but reciprocal crosses are needed for further verification.
The characteristics of the second SI reaction site and fruits with no seeds are found in this orchid group, further surprising us. What’s more, there seems to be more SI species with self-pollenated tube growth stopping at the base of column, compared with Dendrobium species, which might suggest branch specificity. Therefore, a wider survey of the growth of pollen tube needs to be conducted, and the detailed changes in the shape of the pollen tube may also be examined, which may help answer questions on the phylogeny of SI in these groups.

Oncidiinae has 65 genera and more than 1600 species [22][23]. Approximately 69.4% of Oncidiinae species are self-incompatible, 22.2% are self-compatible, and 8.3% have both self-incompatible and self-compatible populations [6]. The identification of SI in Oncidiinae is determined by fruit set and seed production after self-pollination [24]. In Oncidiinae, the growth of pollen tubes after self-pollination has only been reported in Notylia nemorosa. The pollen tubes either did not germinate or stopped growing at the stigmatic surface, and the flowers withered approximately four days after pollination [25].
The high SI rate in this subtribe requires pollen tube observation experiments in more species, suggesting that different SI phenotypes exist in this group and that there might be another branch-specific trait.

The SI species reported in this subtribe is Phalaenopsis pulcherrima. Zhang’s research [26] on the breeding system of P. pulcherrima has shown that there is no significant difference in fruit set between self-pollination and cross-pollination, but the number of seeds with embryos in self-pollinated plants is significantly lower compared with cross-pollinated plants. From one to four days, the extent of pollen germination is lower and the length of the pollen tube is shorter after self-pollination. On the fifth day, there are fewer pollen tubes entering the ovule after self-pollination compared with cross-pollination [26]. These findings indicate that the SI of P. pulcherrima is late-acting SI before zygote formation. In this case, pollen can germinate, and pollen tubes can grow and enter ovules; however, the large number of self-pollinated fertilized eggs cannot develop into seeds [27][28].
Based on the above listed results, the SI phenotypes in orchids species contain each developmental stage from the beginning of hydration to the formation of the zygote after self-pollination, which is not reported in other angiosperm families. However, there are still a lot of pollination experiments to be done. For orchids groups with high SI rate, pollen tube observation experiments should be carried out in more species so that more SI phenotypes may be found, further verifying whether branch specificity exists among orchids groups. For species whose pollen tube growth stops at the stigma, reciprocal cross tests need to be performed in order to distinguish between GSI and SSI. In addition, in the past, many studies have evaluated the self-incompatibility of orchids based on fruit setting rate rather than pollen tube growth, and there has been no systematic mating system study on all orchids, so the proportion of self-incompatibility in orchids has been underestimated. A wider survey of mating systems based on pollen tube growth is needed, which will help to answer questions on the phylogeny of SI among orchids groups.

2. Physiology of SI in Orchidaceae

The pollen of the Orchidaceae contains large amounts of auxins [29]. Application of auxin to the stigma can result in post-pollination phenomena [30]. The use of auxin to treat self-incompatible orchids species can trigger flower abscission, but this can lead to parthenocarpy in self-compatible or partly self-compatible plants [3][31][32]. The detection results of the pollen substances of Phalaenopsis after pollination suggest that auxin, as the primary pollen signal [33], is transferred to the style and gradually infiltrates various organs, inducing ethylene production [34] and eventually leading to apoptosis in the perianth. The concentrations of auxin and ethylene were monitored during the development of pollen tube after self- and cross-pollination in D.chrysanthum, respectively [14]. The concentration of auxin was significantly higher within three days after self-pollination compared with cross-pollination. The concentration of ethylene (ACC) increased significantly at three days after self-pollination and decreased significantly at three days after cross-pollination. SI might fine-tune the auxin concentration, which promotes the production of ethylene [14], suggesting that auxin and ethylene might be involved in SI response.
However, further experiments are needed. Investigations into external hormone and hormone inhibitor treatment would be helpful to explore the effect of hormones on pollen tube development with self-pollination. Whether auxin and ethylene are involved in the SI response in other SI phenotypic species also needs to be verified. What is more, whether other hormones and ions, such as calcium involved in the SI response in Papaveraceae [35], are also involved in the orchids’ SI response, needs further verification.

More
© Text is available under the terms and conditions of the Creative Commons Attribution (CC BY) license (http://creativecommons.org/licenses/by/4.0/)
Upload a video for this entry
Information
Subjects: Evolutionary Biology
Contributor MDPI registered users' name will be linked to their SciProfiles pages. To register with us, please refer to https://encyclopedia.pub/register :
Shan-Ce Niu
View Times: 53
Revisions: 2 times (View History)
Update Time: 13 Dec 2021
Table of Contents
1000/1000
Hot Most Recent