Submitted Successfully!
Thank you for your contribution! You can also upload a video entry related to this topic through the link below:
https://encyclopedia.pub/user/video_add?id=17020
Check Note
2000/2000
Arginine Metabolism in Oral Tongue Squamous Cell Carcinoma
Edit
Upload a video
This entry is adapted from 10.3390/cancers13236068

Arginine is a semi-essential amino acid with a complex metabolism pathway and diverse functionality, which spans well beyond its role in the immune system. Cancers that are ‘arginine auxotrophic’ rely on extracellular arginine as a crucial substrate for proliferation and growth. Capitalizing on this vulnerability, there are numerous clinical trials evaluating the therapeutic benefits of depleting arginine in multiple types of cancer, including those occurring in the head and neck. However, head and neck cancers are different and are nonauxotrophic for arginine. Here, researchers explored the intricacies of arginine metabolism in tongue cancer in order to better understand the therapeutic potential of this biological vulnerability.

Aggregated results from one previous report hinted that ARG1 protein expression was higher in head and neck tumor tissues compared with nontumor [1]. However, these findings are opposite to our more recently published data [2] and two independent datasets (GEO (U133Plus2 GPL570) and TCGA) (Figure 1a) [3][4]. To robustly verify the expression of ARG1 in oral squamous cell carcinoma cells, endogenous expression was measured in a range of cell lines (SCC9, SCC25 and Cal27). Compared with high endogenous expression of ARG1 in Huh7 control cells, we show that ARG1 was not detectable in oral squamous cell carcinoma (SCC9, SCC25 and Cal27) or noncancer keratinocyte (HaCaT) control cells (Figure 1b). These data also verify the successful transfection of ARG1 at the RNA level (Figure 1b). 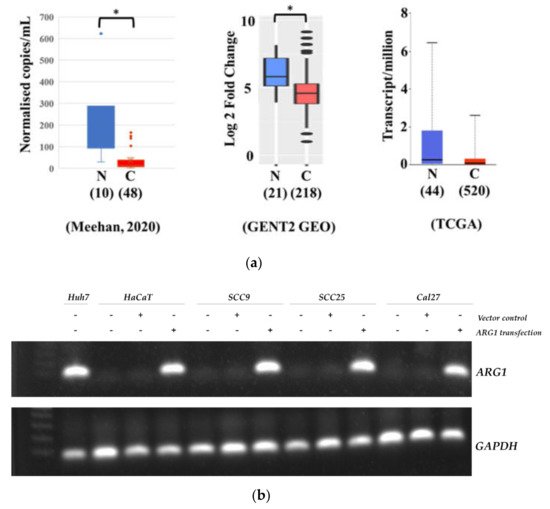 Figure 1. ARG1 expression in oral tongue cancer cell lines. (a) Box and Whisker plots showing reduced ARG1 expression in head and neck cancer relative to noncancer controls using previously published and freely accessible data. * p < 0.05 (b) Cal27, SCC25 and SCC9 oral tongue cancer cells and HaCaT keratinocytes were transfected with ARG1 or empty vector. Gene expression was measured by RT-PCR to confirm that transfection was successful. After transfection, the level of overexpression was similar to that observed in the positive control cells (Huh7). 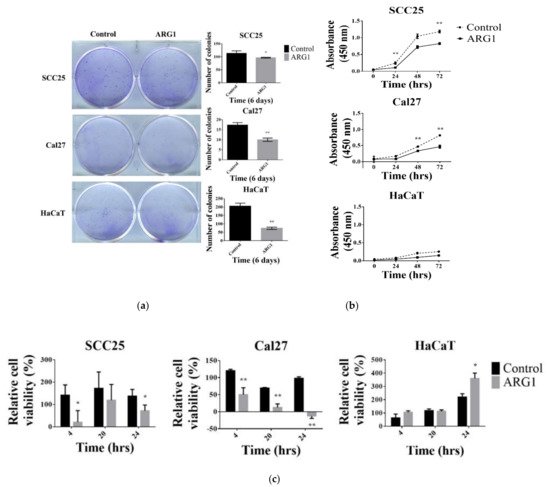 The effect of ARG1 overexpression on the migratory ability of oral cancer cells in vitro was determined by a wound-healing assay. The wound-healing rate of ARG1-transfected SCC25 and Cal27 cells was significantly reduced (87%, 70%, 62.4%, p < 0.001 and 88.44%, 26.53%, p < 0.001) relative to control cells (Figure 3a). In comparison, the rate of wound closure was not significantly different between ARG1-transfected HaCaT cells and controls. The invasiveness of ARG1-transfected SCC25 and Cal27 was determined using a transwell migration assay. The data showed that the invasive capacity of SCC25 and Cal27 cells were significantly lower after ARG1 transfection (0.36-fold, p < 0.001 and 0.31-fold, p < 0.05 at 24 h relative to control, respectively). In comparison, there was a small but significant increase in migration of the ARG1-transfected HaCaT cells relative to control (1.3-fold, p < 0.05) (Figure 3b). Taken together, these data indicate that ARG1 overexpression inhibits the migration and the invasion of oral cancer cells in vitro. 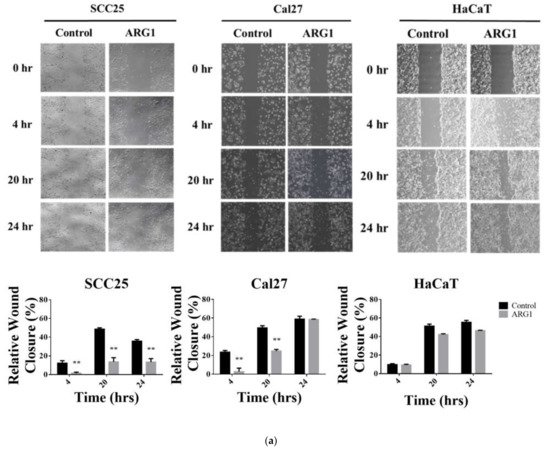 RNA-sequencing was performed to explore the genes and associated networks that were impacted by deregulated ARG1 expression (Figure 4). We identified a total of 395 differentially expressed genes (DEGs) using an FDR-adjusted p < 0.05. Of these, 69 were upregulated, and 40 were downregulated in ARG1-transfected cells based on a log2 fold change threshold of >1 and <−1, respectively. The top 20 DEGs with the greatest changes in expression are shown in Table 1 and Figure 4a,b. Consistent with experimental transfection, ARG1 was the most upregulated DEG with a 6.6-fold increase in expression. This was followed by 5.6-fold and 5.3-fold upregulation of LAT and C19orf38, respectively. In contrast, RXFP3 was the most downregulated gene (−4.9-fold), followed by RFPL3S and GP5 (−4.9-fold and −4.8-fold, respectively).

Figure 4. Volcano plot and heatmap representation of RNA-sequencing data. (a) The volcano plot was generated with the enhanced Volcano package in R using HISAT2-featureCounts-DESeq2 log fold change and p-value thresholds of −1 and 1 and 0.05, respectively. The orange color represents highly expressed genes, while the blue color represents weakly expressed genes. (b) Heatmap of the top 20 most deregulated genes in SCC25 cells with and without ARG1 overexpression. We observe two distinct clusters of significantly up- and downregulated genes that dichotomize cells based on ARG1 overexpression status.
Additional in silico analysis using UALCAN and the head and neck cancer TCGA dataset was used as an orthogonal method to support these data. We show that LAT expression is significantly upregulated in head and neck tumors compared with noncancer controls (Figure 5), a phenomenon that was recapitulated by our gene expression data. It is speculated that ARG1 transfection may drive a further increase in LAT expression, but further analyses are needed to quantitate this. In contrast, in silico analysis shows that CCDC63 expression is low and conserved between cancer and noncancer tissues (Figure 5). This contrasts with the results described in Table 1, where CCDC63 expression is significantly upregulated in oral cancer cells after ARG1 transfection. It is also  showed that RXFP3 and RFPL3S expression is significantly higher in head and neck cancer tissues compared with noncancer controls (Figure 5). 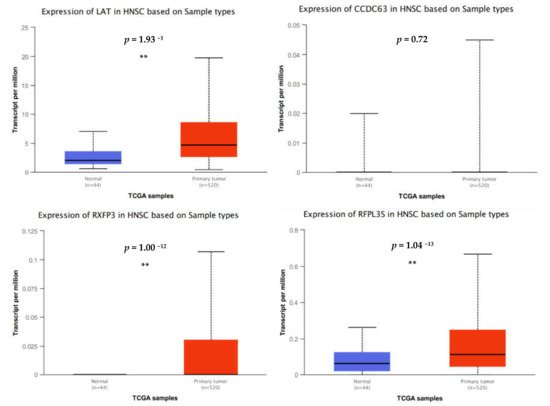 Figure 5. In silico analyses of deregulated genes. LAT, RXFP3 and RFPL3S are expressed at statistically significantly higher levels in head and neck cancer tissues relative to noncancer controls whereas CCDC63 expression is similar between cancer and noncancer. ** p < 0.001. 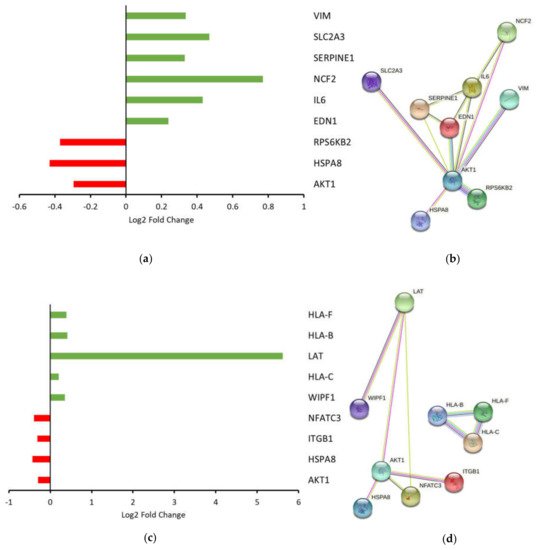 Figure 6. Visual representation of DEGs over- and underrepresented in the HIFα and natural killer cell signaling pathways, respectively. (a) Graphical representation of log2 fold change of DEGs that were overrepresented in the HIFα signaling pathway. (b) STRING diagram showing that overrepresented DEGs in the HIFα signaling pathway are known or predicted to interact based on various lines of evidence. (c) Graphical representation of log2 fold change of DEGs that were underexpressed in the natural killer cell signaling pathway. (d) STRING diagram showing that underrepresented DEGs in the natural killer cell signaling pathway form 2 interaction groups.
We also analyzed upstream regulators of DEGs by using the upstream regulator analysis tool in IPA. This tool associated the upstream regulators with downstream functions to generate regulator effects hypotheses with predicted activation of upstream regulators. Type I interferon family genes, IFNα2, IFNλ1 and IFNλ receptor 1, important regulators of innate antiviral and antibacterial immunity, were predicted to be positive regulators upon ARG1 overexpression. Similarly, MAP3K7 was predicted as another positive regulator and is an important mediator of cellular responses evoked by changes in the environment. It is noteworthy that IFNL1 was identified as the most important activated upstream regulator (p = 1.32 x 10−13) and is predicted to be responsible for the gene expression changes observed in the experimental dataset. Beyond this, IPA predicted that IFNL1 is most likely to be associated with elevated levels of IL-12 in the circulation and decreased viral replication (Figure 7). This prediction tool also revealed that IRGM and MAPK1 may be significant negative upstream regulators. IRGM is a putative GTPase involved in orchestrating an innate immune response and regulating proinflammatory cytokine production. MAPK1 is an essential component of the MAP kinase signal transduction pathway and mediates diverse biological functions such as cell growth, adhesion, survival and differentiation through the regulation of transcription, translation and cytoskeletal rearrangements. 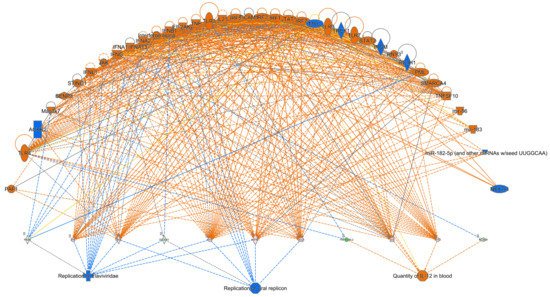 Figure 7. Representation of the top disease and function effects caused by predicted upstream regulators that are impacted by ARG1 overexpression. Blue and orange shapes represent negative and positive effects, respectively.

More
© Text is available under the terms and conditions of the Creative Commons Attribution (CC BY) license (http://creativecommons.org/licenses/by/4.0/)
Upload a video for this entry
Information
Subjects: Oncology
Contributor MDPI registered users' name will be linked to their SciProfiles pages. To register with us, please refer to https://encyclopedia.pub/register :
Lee Leanne Leung
View Times: 38
Revisions: 2 times (View History)
Update Time: 13 Dec 2021
Table of Contents
1000/1000
Hot Most Recent