Submitted Successfully!
Thank you for your contribution! You can also upload a video entry related to this topic through the link below:
https://encyclopedia.pub/user/video_add?id=16907
Check Note
2000/2000
Deep Learning-based Fault Diagnosis of Electric Motors
Edit
This entry is adapted from 10.3390/en14217017

Electric motors are used extensively in numerous industries, and their failure can result not only in machine damage but also a slew of other issues, such as financial loss, injuries, etc. As a result, there is a significant scope to use robust fault diagnosis technology. In recent years, interesting research results on fault diagnosis for electric motors have been documented. Deep learning in the fault detection of electric equipment has shown comparatively better results than traditional approaches because of its more powerful and sophisticated feature extraction capabilities.

The electric induction motor is perhaps the most significant driver of today’s production activities and everyday life, and it is extensively utilized in many sectors of production and manufacturing industries as well as in domestic utility applications. An electric motor is a mechanical mechanism that transforms electrical energy. Most electric motors work by generating force in the form of torque delivered to the motor’s shaft by interacting between the magnetic field of the motor and the electric current in a wire winding. The failure or stoppage of this type of vital electrical machine will not only harm the equipment itself but will also likely result in significant economic losses, fatalities, pollution, and numerous other issues. Therefore, research into motor fault diagnostic technology is extremely important.
The fault diagnostic technology can detect motor defects early in their development, allowing for prompt overhauls, saving time and money on fault repairs, and enhancing the economic advantages while avoiding production interruptions. Traditional fault diagnostic approaches need the artificial extraction of a considerable quantity of feature data, such as time domain features, frequency domain features, and time–frequency domain features [1][2][3], which adds to the fault diagnostic uncertainty and complexity. Traditional fault diagnosis methods are unable to meet the needs of the fault diagnosis in the context of big data due to the complex and efficient development of motors, which presents the data reflecting the operating status of motors with the characteristics of massive, diversified, fast flowing speed, and low value density of “big data” [4][5][6]. Simultaneously, the advancement of artificial intelligence technology encourages the evolution of fault diagnosis technology from traditional to intelligent [7]. Artificial neural networks (ANNs) were first introduced in the 1980s. Shallow neural networks may learn features in an adaptable manner without creating exact mathematical models [8], eliminating the uncertainty and complexity that human involvement brings. However, traditional shallow neural networks have drawbacks, including gradient vanishing problems, overfitting, local minima, and the requirement for extensive prior information, all of which decrease the effectiveness of the fault diagnosis [9].
In 2006, Hinton et al. [10] developed the concept of deep learning (DL) and demonstrated that data characteristics generated by a deep multilayer network structure may more accurately represent the original data, and that the approach can effectively minimize the complexity of training deep neural networks. This has resulted in a surge in deep learning related research in both academia and industry. In 2007, Bengio et al. [11] suggested the use of unsupervised greedy layer-wise training to train deep neural networks so to optimize the structure of deep networks parameters in order to improve the model generalization ability. Bengio et al. [12] have proposed using an error backpropagation technique to better improve the deep network structure parameters. The use of this approach increases model performance much further.
Deep learning has rapidly progressed in the academic and industrial sectors since its introduction. Many classic recognition tasks have witnessed considerable improvement in recognition rates due to deep learning. The capacity of deep learning to perform complicated recognition tasks has piqued the interest of many academics who seek to understand more about its uses and theories [13]. As a result, deep learning theory is widely utilized to address issues in a variety of disciplines. Simultaneously, different and better deep learning algorithms are continually suggested and implemented. Deep learning has just been developed in the last ten years, with advances in image [14], speech [4], and face recognition [15], among advances in other disciplines. Deep learning-based research is also in full swing in the field of motor defect diagnostics. Given that deep learning provides novel concepts and methodologies for motor fault diagnosis, the literature methodically expounds on deep learning theory and its use in motor fault diagnosis research.

Bearing faults, stator faults, rotor faults, and air gap eccentricity faults are all common motor defects, with bearing failures having the highest probability and rolling bearings being prone to gearbox faults.
Signal processing approaches combined with classification algorithms (such as support vector machines, decision trees, K closest neighbors, etc.) are frequently used in classical fault detection to categorize and identify defects. The signal processing method is one of them, and it employs several approaches depending on the type of fault. When a motor bearing fails, for example, vibration signals or stator current signals are frequently used, and time–frequency domain analysis, statistical analysis, wavelet decomposition, and other methods are used to extract features from the signal when the motor rotor fails, while the time–frequency domain analysis, statistical analysis, wavelet decomposition, and other methods are used to extract features from the signal. The stator current detection method is the most often utilized. The features of the stator current signal are retrieved using the Fourier transform or the Hilbert transform since the stator current signal is straightforward to gather. When a motor stator breaks, a mathematical model or the determination of the motor problem is typically applied. The defect is diagnosed using the current and voltage signal detecting approach. When using the signal detection method, feature extraction calculations are still required; however, when the motor has an air gap eccentric defect, the current signal analysis approach is frequently utilized to diagnose the fault.
Artificial feature selection and extraction are always necessary for the generally used traditional motor fault diagnosis methods, which raises the uncertainty of the motor fault diagnosis and affects the accuracy of motor problem diagnosis. The deep learning model may extract features from the source signal in an adaptive manner, thereby avoiding the impact of artificial feature extraction.

Figure 1 depicts a fault diagnostic framework based on the existing DBN-based motor fault diagnosis method, which consists mostly of the following steps: 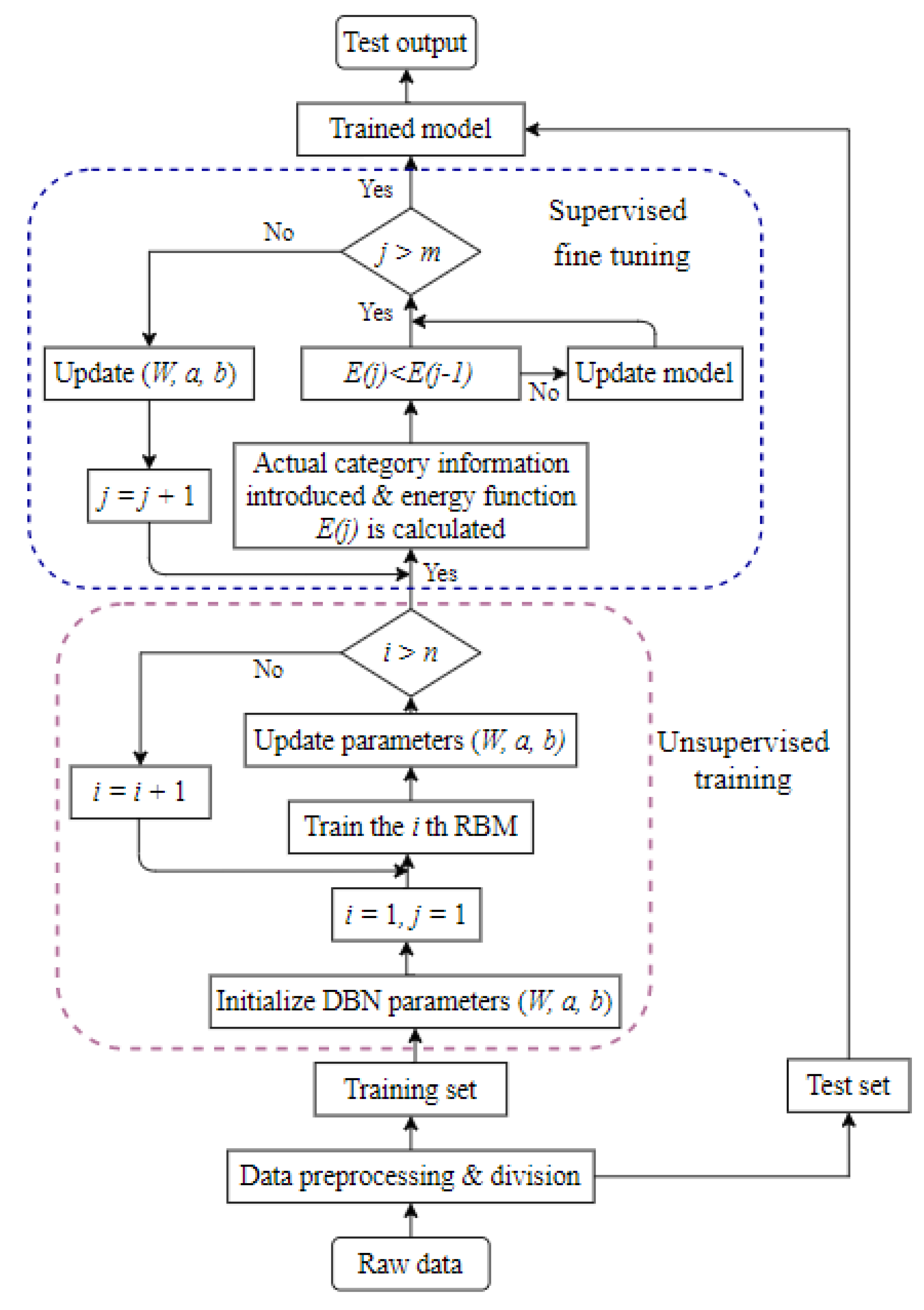 Step—1: Obtain the time/frequency domain signals of the equipment under normal and fault situations using sensors and signal preprocessing technologies;
Step—2: Split the signal into training and test sets after segmenting and normalizing it;
Step—3: Create a multi-hidden-layer DBN model and utilize the training data for layer-by-layer unsupervised and greedy training;
Step—4: Use category information to fine-tune the DBN model parameters;
Step—5: Perform fault diagnosis on the test set using the trained DBN model.

The diagnosis framework is depicted in Figure 2 and summarizes the available electric motor fault diagnosis approaches based on deep self-encoding networks. It essentially contains the following steps: 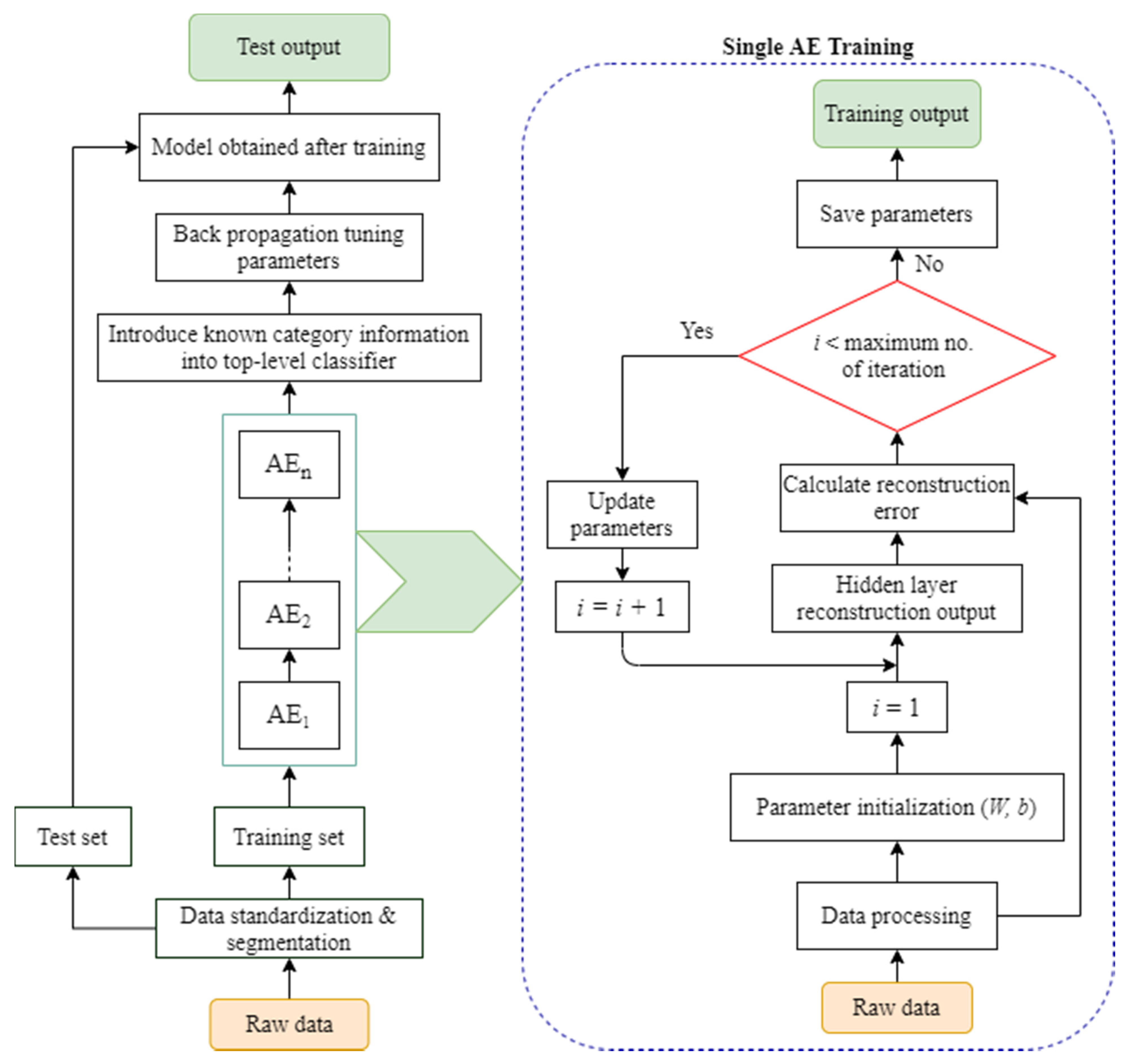 Figure 3 depicts the CNN-based motor defect diagnosis system. The following are the main steps in order: 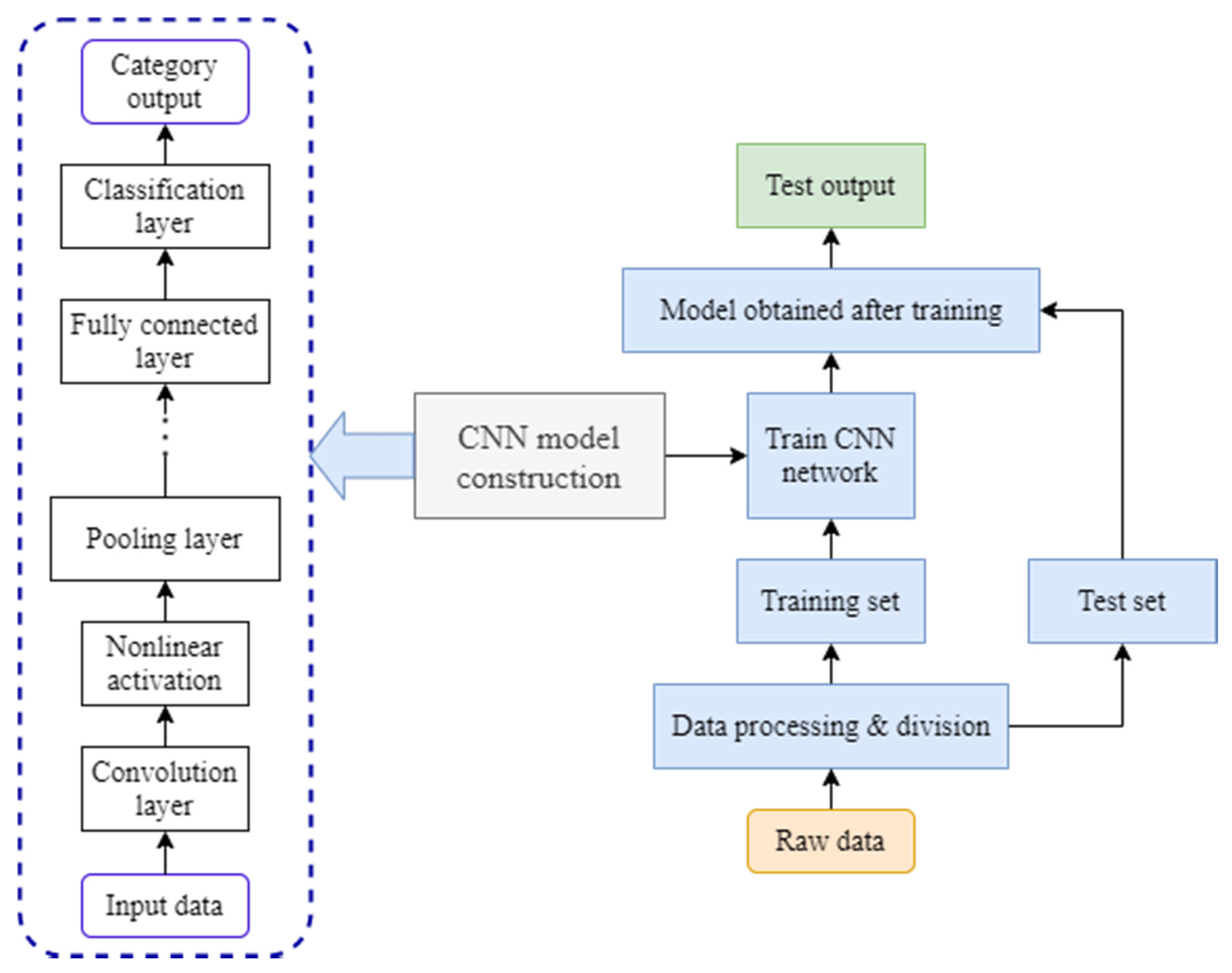 Step—1: Obtain the time domain or frequency domain signals from the equipment under normal and abnormal conditions using sensors;
Step—2: Separate the signal into training and test sets by preprocessing it;
Step—3: Using the received data, determine the size, number, scanning step, and the number of hidden layers of the CNN and create a CNN model;
Step—4: Use the training set for supervised training after initializing the CNN network parameters and keep updating the network parameters until the maximum number of iterations is reached;
Step—5: Perform the fault diagnostics on the test set using the trained CNN model. 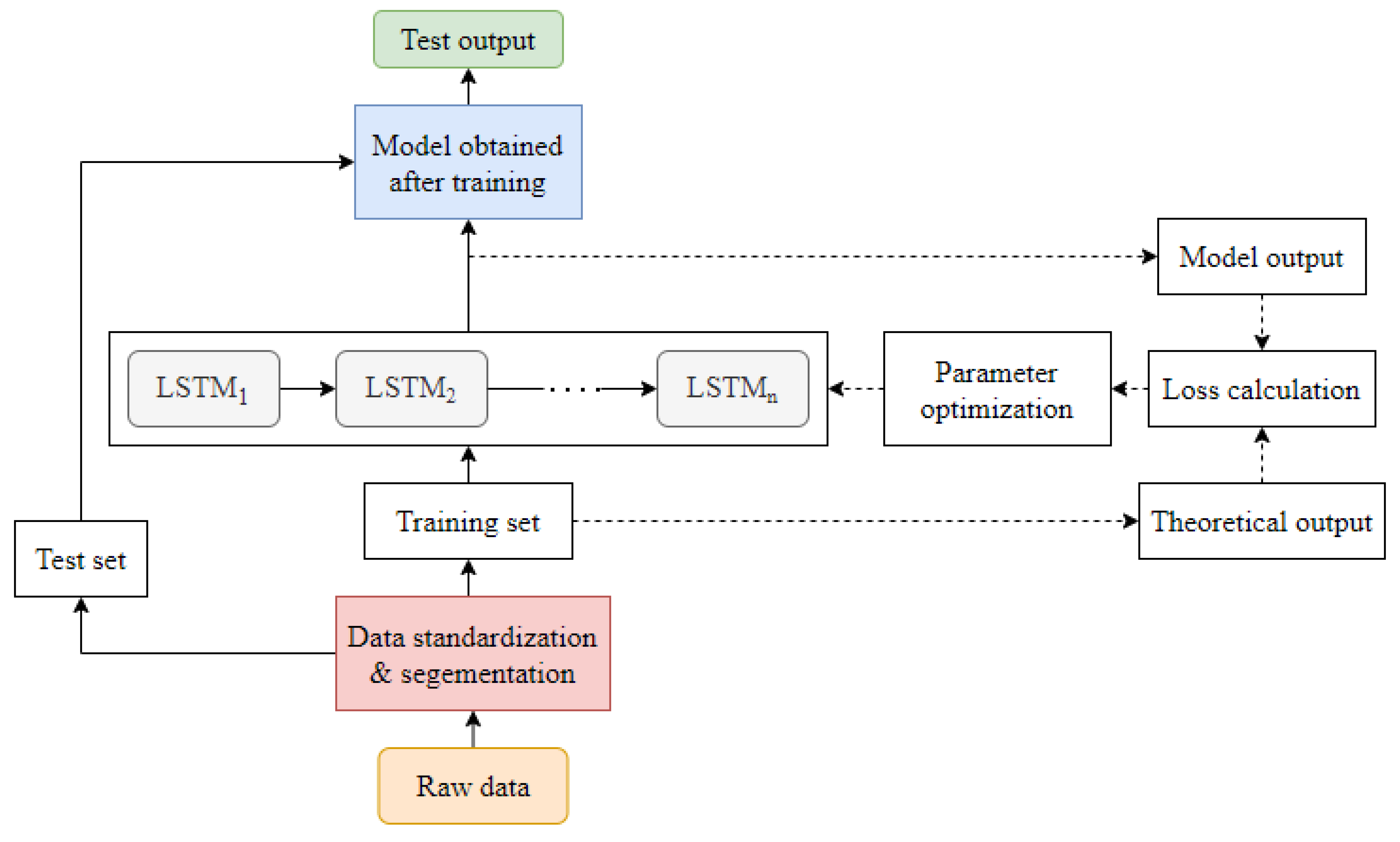 Figure 4. LSTM fault diagnosis framework.
The sluggish training pace of traditional RNNs is also of concern [17]. To address this issue, the literature [18] has proposed a fault detection method for asynchronous motors that combines RNN with dynamic Bayesian networks while also training the neural network using the simultaneous perturbation stochastic approximation (SPSA) method, which improves the training efficiency and fault diagnosis accuracy. A robust RNN adaptive gradient descent (RAGD) training technique was published in the literature [19], which considerably improves the RNN training speed. Using diagonal RNNs, the literature [20] presents a method for diagnosing interturn defects in the stator windings of asynchronous motors. RNNs with deviation units are used in the literature [21] to implement distortion voltage waveforms based on rectifiers. This method for diagnosing complex power electronic equipment or systems has been shown to be useful through fault classification and in experiments. An upgraded echo state network based on the RNN is applied to electromechanical systems in the literature [22].

Despite the four conventional deep learning networks discussed above, researchers are still working to improve the detection method of occurring faults in electric machines and have developed several customized deep learning structures which showed a significant amount of perfection upon deploying to fault diagnosis. Chengjin et al. [23] have developed deep twin convolution neural networks with multidomain inputs (DTCNNMI) which builds three input layers so to integrate automatically extracted time domain, time–frequency domain, and hand-crafted time domain statistical characteristics, thereby resulting in improved model performance. The use of twin convolutional neural networks with large first layer kernels for extracting multidomain information from vibration signals is demonstrated, as is the resistance to the effects of ambient noise and changes in the operating circumstances on the final diagnostic findings. The efficacy of the suggested technique is demonstrated by comparing it to current representative algorithms and using experimental datasets. Taking into consideration the prospect of fault diagnosis under noisy environments, Dengyu et al. [24] have proposed a noisy domain adaptive marginal stacking denoising autoencoder (NDAmSDA) based on acoustic signals to mitigate the problem of domain shifting by introducing Transfer Component Analysis (TCA) and by speeding up the training process by replacing the traditional gradient decent of backpropagation with a forward closed-form solution, which enables the feasibility of reducing the difference between numerous noise levels as well as moving the classifiers from one noisy domain to others. An unsupervised deep learning network with mutual information (MI) [25], which is called deep mutual information maximization (DMIM), has been used to determine motor faults considering both global and local MI. The MIs between the output and multiple levels or areas of representations are estimated and maximized simultaneously using the f-divergence variational divergence estimation technique. It has been noted as a pioneer where a deep neural network input and output of mutual information has been maximized so to create a motor defect diagnosis model where the working environment is complex and noisy.