Submitted Successfully!
Thank you for your contribution! You can also upload a video entry related to this topic through the link below:
https://encyclopedia.pub/user/video_add?id=16757
Check Note
2000/2000
Crohn’s Disease Complication
Edit
Upload a video
This entry is adapted from 10.3390/jcm10235548

Crohn’s Disease (CD) is a chronic inflammatory disorder in which up to 50% of patients develop fistula within 20 years after the initial diagnosis, and half of these patients suffer perianal fistulizing disease. The etiopathogenesis of CD-related perianal fistula is still unclear, and its phenotypical and molecular characteristics are even more indefinite. A better understanding would be crucial to develop targeted and more effective therapeutic strategies.

Crohn’s Disease (CD) is a chronic inflammation in which the disorder could affect any region of the gastrointestinal tract from the mouth to the anus (but with typically higher incidence on ileum and colon), and together with Ulcerative Colitis (UC) are stand for inflammatory bowel diseases (IBD). Although the precise beginning remains unknown, the starting point of CD is believed to result from the interplay between genetic susceptibility, environmental factors, and their interactions with gut microbiota [1][2]. Moreover, the interaction between these factors and the patient’s immune system is as well considered crucial for the pathogenesis of the disease (Figure 1a,b). 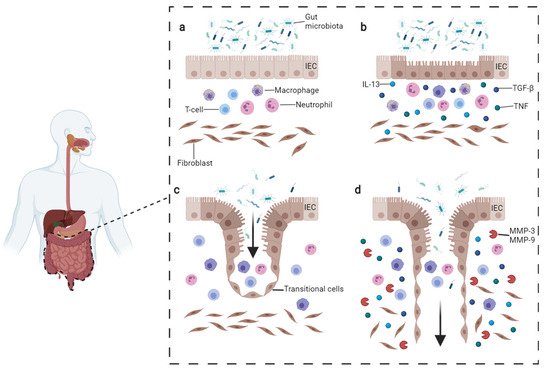 Figure 1. Pathogenesis of CD fistula. (a) Normal condition persisting in the gut. (b) In CD, the intestinal lesions can be triggered by multiple factors such as inflammatory cells reacting to microbiota or intestinal pathogens. The inflammatory infiltrate includes T-cells, B-cells, and macrophages which produce TNFα. Fibroblasts, staying underneath, produce TGF-β and IL-13. These cytokines trigger EMT and tissue remodeling. (c) During EMT, intestinal epithelial cells (IECs) lose their adhesion properties, downregulating β-catenin and E-cadherin proteins. IECs start migrating underneath in order to repair the lesion and become transitional cells (TCs). (d) TCs produce IL-13 which induces other cells to undergo EMT, penetrating deeper in lower layers. The process is facilitated by the production of metalloproteinases (MMPs) which degrade the extracellular matrix. Image adapted from Panes et al. [3] and drawn with BioRender.com (accessed on 23 November 2021).
CD-related fistula can be distinguished by the presence of a central fissure that invaginates deeply toward the mucosal barrier of the gut, surrounded by neutrophils, lymphocytes, and granulation tissue. The fence of the fistula canal is densely populated by T-cells CD45RO positive, macrophages CD68 positive, and B-cell CD20 positive.
In order to restore the integrity of the intestinal epithelial barrier, the defect in CLFP migration is compensated by intestinal epithelial cells (IECs) converting into transitional cells (TCs), which gain mesenchymal myofibroblast-like features through a mechanism called epithelial-to-mesenchymal transition (EMT) [4] (Figure 1c,d). In this complex program, IECs lose cell polarity and adherence while acquiring invasive and migratory properties (see below).
Another important factor possibly contributing to the pathogenesis of CD-related fistula is the gut microbiota. The hypothesis is indirectly supported by the fact that antibiotic therapy might be beneficial for treating fistulizing CD.

Although there are several recognized risk factors for Crohn’s disease [1], no environmental factors have been associated with the etiopathogenesis of CD-related fistula yet. In fact, CD-related fistula appears mostly related to genetic, microbiological, and immunological components [5]. Furthermore, its phenotypical and molecular characteristics are not well-characterized.
Few comparative studies have allowed to identify markers able to distinguish CD fistulae from non-inflammatory bowel disease ones (also known as idiopathic or crypto-glandular).
The crypto-glandular type was first classified, albeit inconclusively, by Parks in 1961 [6] on the basis of histological evidence of infection in anal glands.
For a long time, it was thought that the persistence of the fistula depended upon inflammation, the presence of bacterial endotoxins perpetuating an inflammatory response within the lumen even when bacteria are destroyed [7], and upon the presence of bacterial pro-inflammatory peptidoglycan (PG) which may stimulate the secretion of interleukin-1β (IL-1β) [8].
The first evaluations on specific inflammatory characteristics of the fistulae were carried out by immunohistochemistry (IHC). CD fistulae diverge considerably from non-CD fistulae concerning their inflammatory composition, except for the lining epithelium. CD fistulae present high levels of infiltrated T cells CD45RO positive in the interior wall, dense infiltration of B cells CD20 positive surrounding lined up by a small group of macrophages CD68 positive. The second type has an intense infiltration of CD68 positive macrophages enclosed by CD45RO positive T lymphocytes [9].
Metalloproteases (MMP) and tissue inhibitors of metalloproteinases (TIMPs), which contribute to fistula formation through extracellular matrix degradation, did not show any difference between the two types of fistulae, with exception of MMP-3 and 9 that appear to be upregulated in idiopathic fistula [10].
Abundant expression of IL-1β, IL-8, IL-12p40 cytokines, and tumor necrosis factor (TNF)-α were found in idiopathic anal fistulae [11]. However, TNF-α was also significantly up-regulated in the serum of CD-related perianal fistula patients [12].
Data on inflammation and EMT were confirmed also in non-CD fistulae through real-time PCR (RT-PCR) and Western blot analysis beside IHC. The inflammation was evaluated by the expression of IL-8 and IL-1β that were respectively more expressed in the proximal part than in the distal one and vice versa for the second marker [13][14]. The expression of markers such as TGF-β, Vimentin, ZEB1, SNAIL which were highly expressed in both proximal and distal parts, with mild E-cadherin reduction, were used for EMT evaluation [14].
Antimicrobial peptides, that are controlled in response to a bacterial antigens provocation or the presence of inflammatory cytokines, specifically hBD2 and hBD3 together with RNase7 and psoriasin, resulted to be elevated in the distal area of non-CD fistulae [13].
Furthermore, flow cytometry analysis (FACS) on curettage and tissue biopsy of CD-related fistulae do not present differences in the ratio of CD161+, IL-17+IFN-γ−, IL-17−IFN-γ+ and IL-17+IFN-γ+ cells between CD4+ or CD8+ T cells. CD161+ T lymphocytes were instead more expressed [15].
Proteomic analysis was performed to evaluate potential dissimilarity in cytokines and phosphoprotein concentration. The phosphorylation status of 28 Receptor Tyrosine Kinases (RTKs) and 11 signaling nodes in addition to 30 cytokines and chemokines was quantified. The two types of fistulae do not substantially differ in their protein expression pattern, even though the panel of cytokines and phosphoproteins analyzed was huge [16]. It is plausible that metabolic changes accompanying EMT precede some of the more obvious signals of mesenchymal transition and indeed actively contribute to the activation of these indicators [17].
All described signatures are schematized in Figure 2.

More
© Text is available under the terms and conditions of the Creative Commons Attribution (CC BY) license (http://creativecommons.org/licenses/by/4.0/)
Upload a video for this entry
Information
Subjects: Biology ; Gastroenterology & Hepatology
Contributor MDPI registered users' name will be linked to their SciProfiles pages. To register with us, please refer to https://encyclopedia.pub/register :
Federica Rubbino
View Times: 42
Revisions: 2 times (View History)
Update Time: 06 Dec 2021
Table of Contents
1000/1000
Hot Most Recent